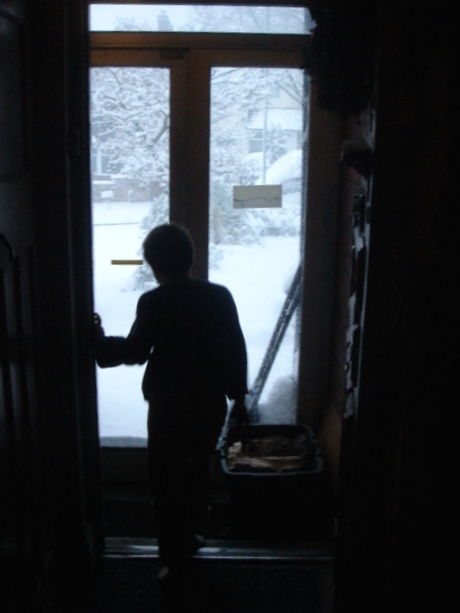 I’d almost forgotten about snow; proper snow with sledging, snowballing, and inconvenience for people who want to go to work. The children rejoice. So far as I know, so does Oscar dog, even when, in the Highlands, there was little to be seen but his tail and a nose, surfacing now and then to check position.

Birmingham, with the rest of the country south of the borders, gets taken by surprise. Snow comes so infrequently, the airwaves disperse hyperbole about 'weather', it can't be nostalgia that I recall such conditions as normal, to be taken in our stride. This weekend on to Monday, buses didn't run. Schools closed. No trains or trams for 48 hours, No gritting. When salting came, as befits services under 'austerity', only arterial roads got the treatment.
Oliver was staying with us on Sunday. We ventured out on foot to the allotments.
At the iron gates I brushed frosted snow off the lock's push buttons.
"We're the only ones to visit"
"How do you know, grandpa?"
"What do you notice about the snow, Oliver?"
To my surprise he couldn't work it out.
We trudged through boot-depth snow to the plot. 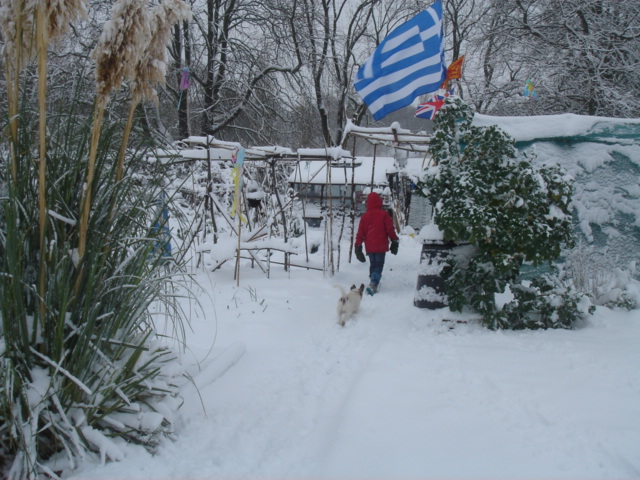 Pristine. From the parks came shouts and laughter. In the distance I could see the smudgy shapes of many Canada geese standing by the pond among the naked trees, oblivious to the stick people cantering about, snowballing, making snowmen, sledging.
"Help me, Oliver"
He'd already made sure to bring a carrot. The snow packed up sticky to make good lumps to pile up for our snowman's body. When he was nearly as high as me I used  a trowel to shape neck and shoulders. Oliver collected chunks with his gloved hands to fill in gaps in the body.
"Charcoal for eyes! Veg nets for a scarf. Give us the carrot"
I carved holes for nose and eyes.
"His mouth!"
I went in the greenhouse and found a dried runner bean pod, curved. Perfect. 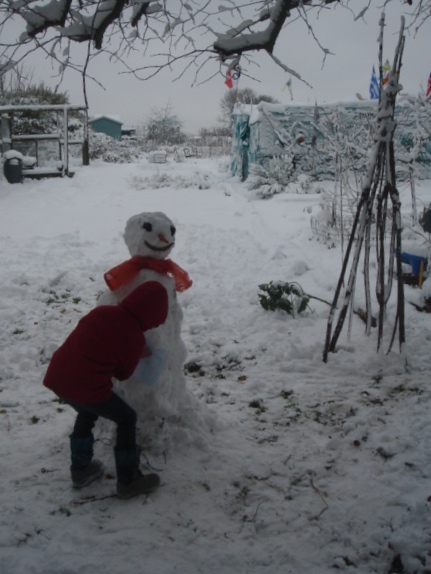 Amy rang "come home, Dad. We're all here now. Pasties and mince pies and...
"We'll go sledging in the park?"
"Of course"
I tarried to put out nuts, seeds, water and fat-balls for birds, Garlic stems were poking out through the snow in two beds; winter onions too. But for disturbance around our snowman, the plot lies under the snow, its soil teeming with dormant life. The burgeoning of summer is hardly imaginable. The bees are silent, clustered in winter around the queen; living off honey. The scene is black and white, but for Oliver's warm red coat and flags on the fruit cage. 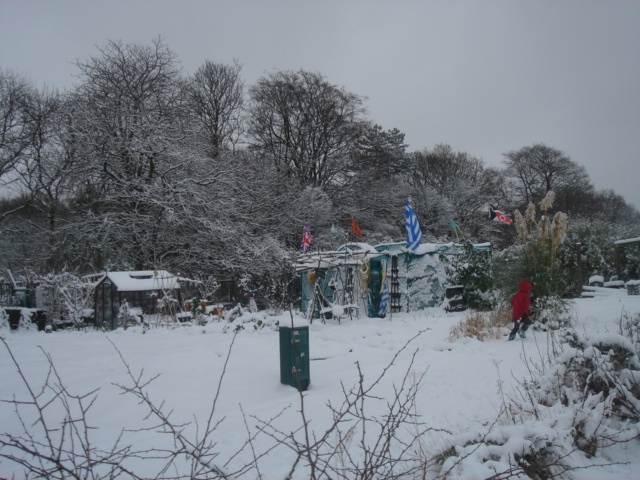 ** ** **
Our park has a special glamour under snow. Amy, Guy, Hannah, Oliver, Oscar dog and I walk over the rail bridge to the other side of the park with its bandstand, and steeper contours, good for sledging. 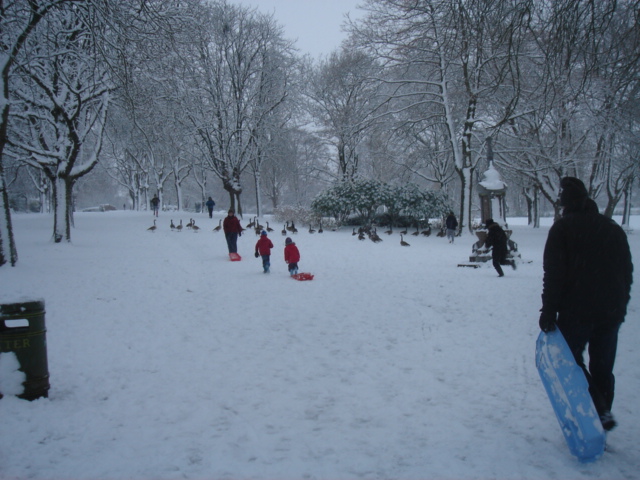 We all have a go on our plastic sledges. I slide on my front, the better to steer with my toes. The children are fearless, sitting upright, veering into trees, tipping over. Up we stumble and down we go again - together and in turns dodging trees, the metal fence near the foot of the run, whooping, shouting, laughing with others sharing the slope,... 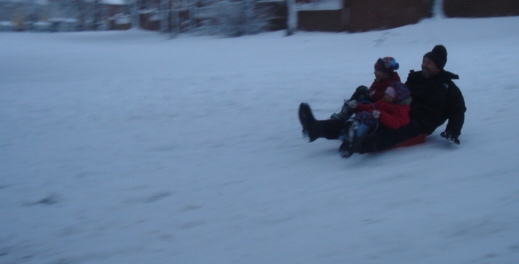 ... until the sky tunes itself to dusk. We head home dragging the children on sledges.
"I love seeing the street lights through the trees" I said to Amy. We're in a lovely city park remote from feral winter.