We have recovered wood turned out by householders when Handsworth Helping Hands (HHH) were doing a Skip-it Don't Tip-it day in Putney Avenue. 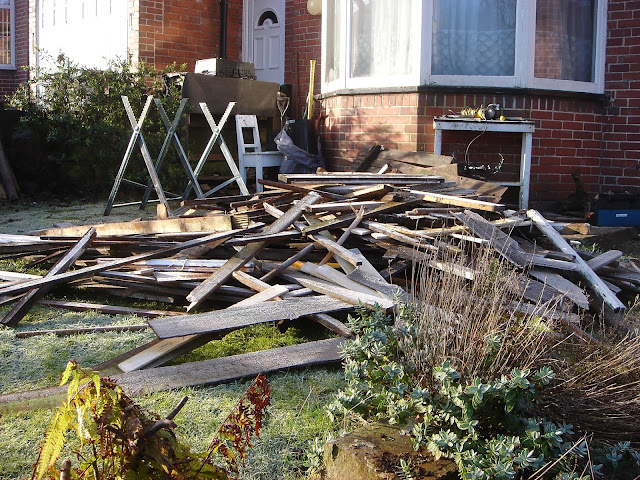 It was full of staples, bolts and nails but once cut up, and stacked, burned well. On eBay Lin discovered a palette manufacturer not far from us who regularly give away kiln dried off-cuts. A few days ago, a neighbour messaged me 'I'm having a dead tree removed. Collect?' Contractors loaded parts of her felled tree into the borrowed HHH van. I stacked them in front of the house. 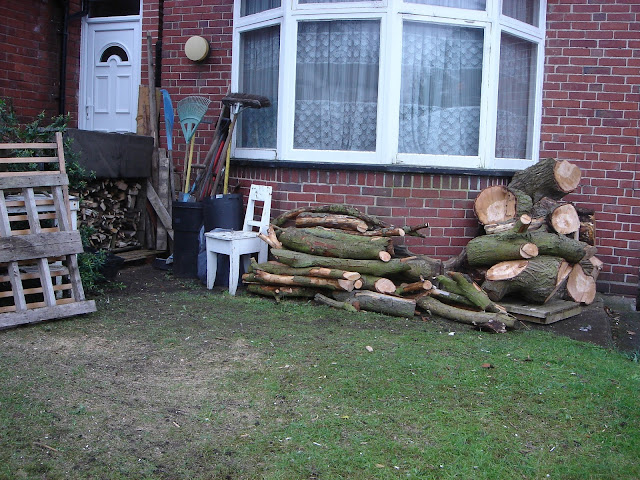 This afternoon, just back from Gloucestershire, I began cutting up the lesser girths with an electric chain-saw. 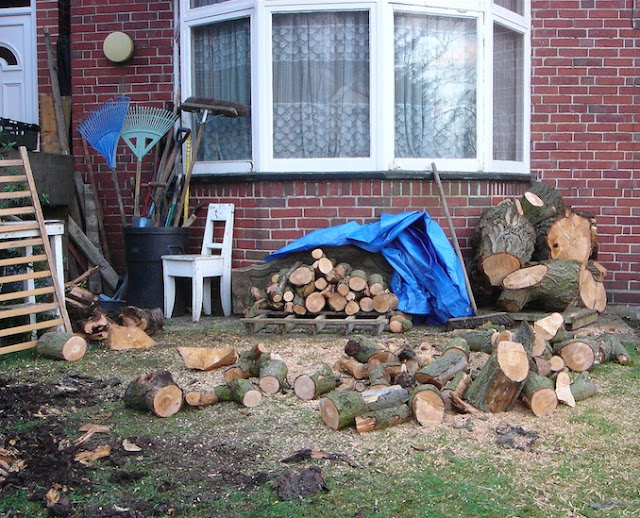 This timber, though from a poplar already dead, is too young to split. In a year it may be ready.
Earlier in the - around 8.00 this morning - Lin and I were in bed in Rock Cottage, in Lydbrook. The phone rang. Dot, her mum, was calling from her kitchen floor in Cannock.
"I've fallen in the kitchen, and I can't wake Arthur"
Lin dialled 999
"I'm 100 miles away in Gloucestershire" she told the operator.
"Is your mother bleeding?"
"I don't know I'm a hundred miles..."
"How does she look?"
The ambulance was on its way to Cannock in 15 minutes. Lin rang Wilf, next door, to unlock the front door, so the crew wouldn't have to break in. Then Arthur was awake. Lin was patched to the ambulance dispatcher.

"Mum may have broken her wrist or her arm. It's badly bruised. I'm going to collect dad and take him to the hospital. Mum doesn't half pick her times. I'll bring them home."
We'd been working on tidying up Rock Cottage. Enjoying seeing Lydbrook again. Making the place ready for the family to enjoy again after Martin and Sandra and their son Adam have done so much restoration since August 2014.


In an hour we were packed up, tidying and heading back to the Midlands, Oscar in the back, We ate a picnic in the car, mackerel pâté sandwiches from a brown bloomer; wedges of pork pie.
*** *** ***
Handsworth Helping Hands has slightly changed direction.  Gaelle Finley included my thoughts on the futility of doing the same thing over and over.... 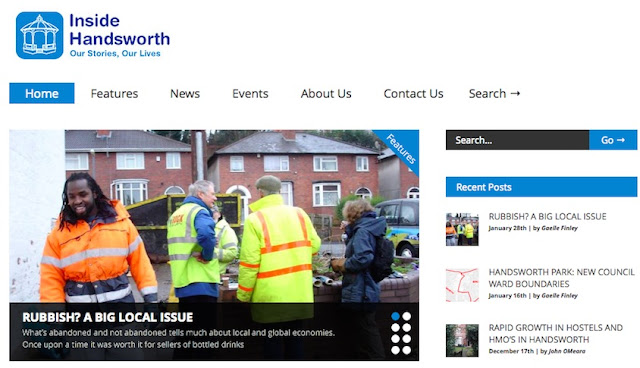 RUBBISH? A BIG LOCAL ISSUE
What’s abandoned and not abandoned tells much about local and global economies. Once upon a time it was worth it for sellers of bottled drinks to pay people (often children) to return empty bottles. It meant fewer soft drinks containers littering the streets. One of the things that strikes anyone collecting street waste is the sheer amount of alcohol being consumed in the area – not beer but liquors of every kind.
Right now far less discarded metal is collected from the street. Why all these fridges? Disposing of them is no longer free to householders. The manufacturers encourage consumers to change fridges more frequently. There’s money to be made from the metal innards of fridges, especially the copper coil in the motor. Now, that’s less likely to be the case, and though people are still dumping fridges, we find fewer ‘gutted’ ones. Why do we see far fewer discarded ovens or washing machines? Because suppliers at point of sale are throwing in disposal-of-your-old-model in return for delivery and installation, which entails plumbing for washers and wiring in direct for all but very small stoves. Fridges and freezers are just plugged in.
Why so many clothes and other soft materials left lying around clothes recycling bins? There’s a market for old clothes often discarded in good condition, and people just want free clothes for themselves and their families. Going through discarded clothes, people select what they want and leave the rest on the pavement.
In our area, not many people want wood. I have delivered wood cut by Railtrack maintenance workers to a wood-stove owner in Handsworth. I use such wood for our wood stove, but there are not many wood stoves around – getting ones efficient enough for accreditation in a smokeless zone tend to make gas cheaper.
We wonder at how much expensive baby equipment is either dumped or given to Handsworth Helping Hands (HHH) as donations. This stuff is not cheap, but even less well-off people like to pay for new things for a baby. We got second hand push chairs for our children but we met friends who are shocked we did this.
Birmingham City Council Fleet and Waste managers attribute the volume of dumped furniture – sofas, armchairs, beds, shelves, sideboards, wardrobes and other items made of chipboard and MDF – to the high turnover of tenancies and the tendency to buy furniture that doesn’t last long. When a new tenant arrives they also want to clear out everything in close contact with previous tenants. A lot of that ends up on pavements. We know that more of this should be paid for by landlords, but it’s an extra too many seek to avoid.
Rarer items thrown in the street, which HHH has encountered, are the big polystyrene blocks that cannabis growers have used to insulate their growing spaces, serving also to hide their activities from the heat sensor in the police helicopter.
Very large accumulations of black bags – a familiar sight in the whole inner ring of the city – suggest the waste disposal methods of tenants a landlord doesn’t wish to be recorded for tax, so that their premises get no, or far too few, wheelie bins.
Add to these issues the vast messiness of trade waste and the low attention given to regulating trade waste licences in our area and you have another major source of rubbish.
We can no longer expect to leave out metal to be collected by the scrap men who roam around HHH street cleaning events – quote from an article in the Guardian last November ‘the bottom dropped out of the recyclable materials market. The global economic downturn means that the global response to “any old UK iron?” is a big fat “no” as scrap metal reputedly plummets from £175 a tonne to a mere £25, plastic prices falling by a reputed £100 a tonne and copper by a huge £1,500 a tonne’.


Members of our voluntary group – Handsworth Helping Hands – enjoy what they do. We live in Handsworth. We care about Handsworth. We work hard and we work as a team. We are even used to thinking that we, our partners and residents, are having a real impact in the area. But more and more we’ve had to recognise that we find ourselves doing the same street clean-ups over and over. We are vexed at how many people seem impervious to change; at how our neighbourhood seems stuck in a rut, remaining an obstinate and notorious mess.  For example, HHH carries out one of its regular ‘Skip-it Don’t Tip-it Days’ in one road, with partners and residents. Afterwards things looks great – for a while. We’re all very pleased – for a while. A job well done – for a while. A few days later, we find the same street that looked briefly as a street ought to look, is again as bad as before people got stuck in cleaning it up.


The same fly-tipping and littering has occurred again, in the same places we picked it up a few days before. We are a small group – 7 of us. We take pride in our local reputation, but we aren’t regulators. We have no authority. We see the same rubbish reappearing and we collect some if it. We resort to the repetitive and often futile labour of reporting it to an overloaded local council.  Knowing all this, experiencing it over three years, the HHH committee decided a few weeks ago to experiment with a shift in approach. We won a grant of £2140 from Birmingham Community Safety Partnership ‘Mobilising Communities Small Grants Fund’.  We selected four avenues – Putney, Brackley, Poplar and Crompton, each with fewer than 20 households, and have named it the ‘4 Avenues Project’. We will strive to engage people in these small places.
We continue to involve our Neighbourhood Office, Birchfield Residents’ Action Group, Midland Heart and Fleet & Waste, .....

...but want to do things WITH rather than TO or FOR people. We are learning. So are residents. So, maybe, is everyone involved; learning together about the same intractable challenges that exist in longer streets, in larger areas, but with – just perhaps – a greater chance of doing something about them.
We would really like to balance the disproportionate emphasis on blaming feckless neighbours. There are such people, but just as with crime and health there is more to it. We need to continue to be hard on littering but harder on its causes.

*** *** *** ***
Last week I donated blood for the 119th time. As a long term donor I'm allowed to continue after age 70, and as a volunteer for the Intervals Study, I'm giving blood more frequently. This time my appointment was 8 in the morning, dawn breaking ...

..On the way home on Constitution Hill I passed a clothes mannequins shop, including a dog mannequin - Tradelines. These give me an idea for a scarecrow on the allotment, especially as the shop has second hand models 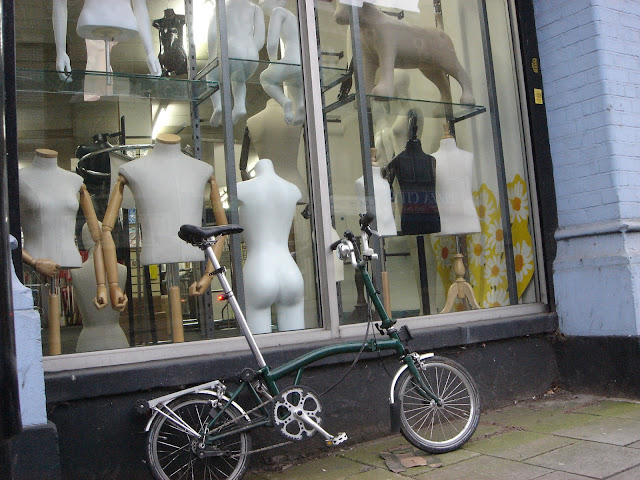 ** ** ** ** **
I offered to child-mind Oliver, instead of waiting for Amy to ask us as a favour. Oliver is just at the stage that ought to go on forever, where he's always asking "Why?" about things and I just love inventing the answers I don't know. We were strolling with Oscar down Gibson Road. The old car has been slowly bio-degrading for as long as we've lived nearby.
Looking at this venerable Vauxhall Cresta Oscar asked "Why?"
"It is owned by the man in that house. Fifty years ago when he was a young man, about your age, he was given that car by his mum who had bought it second hand from the Queen. He was so excited he decided to drive it round the world via America, Russia, South America, China, across Greece to England where the engine exploded, so he bought a house and parked his beloved car in the drive..." "Why?"
"Because he'd driven so far and the car had looked after him he loved it. He could not even think of getting rid of it. So there it's stood for near 60 years!"
"Why?"
We walk on. Later I met up with Amy and Liz and Henry James and Hannah at One Stop. We had a meal at Wetherspoons.

...after which Oliver and I took a train from Perry Barr into New Street where I had a coffee and Oliver a choc ice-cream cone...
...after which I cycled and walked  - Oliver sat on my cycle rack, Oscar in the handlebar basket - down to Fazeley Street where we slipped down an alleyway onto the Grand Union Canal... 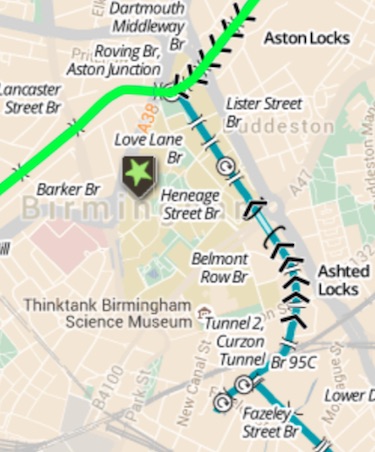 ...we headed through dark tunnels, under bridges and up locks to the junction at Aston Top Lock with the Birmingham & Fazeley. We followed that all the way to Spaghetti Junction where the canal turned east towards Minworth and Amy's home

...Oliver rode, walked and sometimes ran up and down the slopes of locks and hump bridges where a siding canal joins the main, keeping up a running conversation. We stopped at the KFC on Kingsbury Road backing onto the towpath - orange juice and a chicken leg for Oliver and corn-on-the-cob for me - then on in the gathering dusk to where after Minworth locks the towpath deteriorates and we were picking our way through puddles and mud until we came to Minworth Green Bridge hardly a 100 yards from Oliver's home on Summer Lane.
"You realise we've covered nearly 8 miles. All the way from the city centre to your house!"
We were hardly a minute waiting outside the house when Liz turned up, and soon after that Guy and Amy and, a good bit later. Linda. We had an Indian take-away. 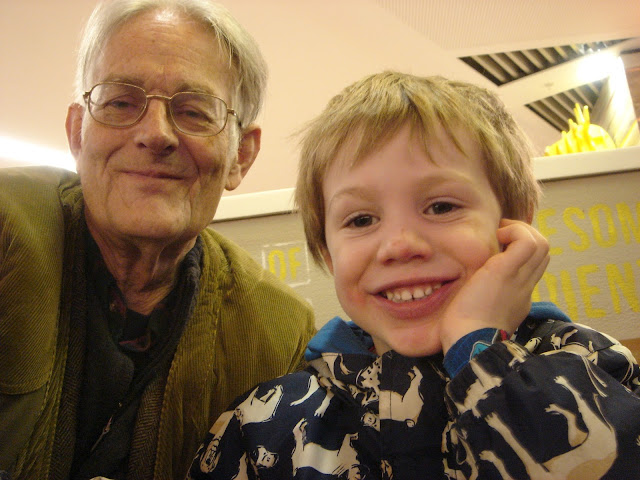