A few days ago Oliver and Hannah were staying with their other grandmother, Christine. She introduced them to kite flying...
...while yesterday Lin and I were entertaining them. 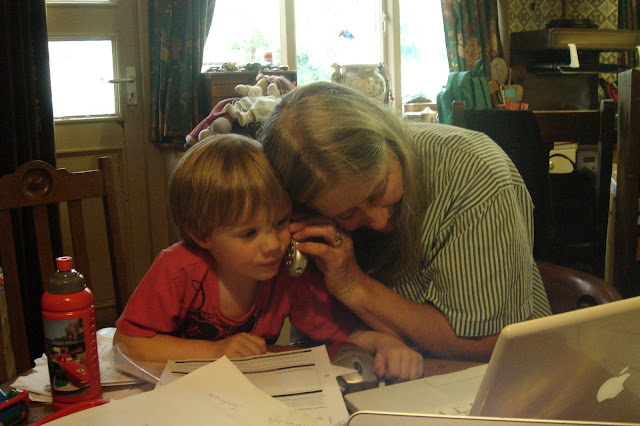 This morning I walked with Oscar and Oliver to the allotment and worked through the morning with Winnie, watering and weeding...


...cropping more broad beans and a first batch of peas, shelling them at home...

A sage item from the minutes of a recent VJA committee:


Flags. – Simon has a union jack flag on his allotment and it was questioned whether this was appropriate as it has negative connotations and could give the wrong impression of the allotment. The flag in question is an ode to a photograph taken close to the allotments that has cultural significance and is therefore an artistic and cultural expression. 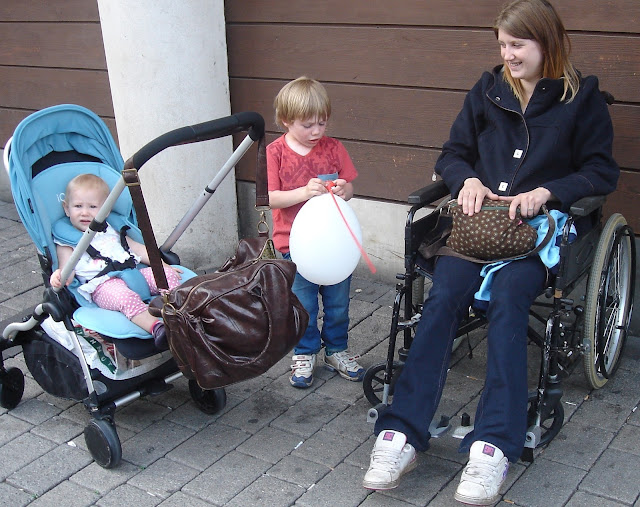 ** *** ***
Yannis Varoufakis, Greek Finance Minister, wrote recently, about a book he had just written 'talking to my daughter about the economy'...

...a book about 'how economic power has emerged from the shadows of political and military might before gradually taking over human societies. The narrative combines history, literature, science fiction films and down-to-earth economic analysis to impress upon teenagers, and various beginners, that economics is an epic drama. Rather than a technical science, it is a battleground on which armies of ideas clash mercilessly and where concepts with a capacity to move mountains emerge; and all that in a war for our own allegiances which are being fought over by powerful interests usually at odds with ours...That, looked at through a piercing eye, behind every economic notion, every theory, there lurks a fascinating debate about human anxieties that only poets, dramatists and musicians have managed to address with any degree of efficiency.'

As it happened – Yanis Varoufakis’ intervention during the 27th June 2015 Eurogroup Meeting
posted on 28th June 2015 The Eurogroup Meeting of 27th June 2015 will not go down as a proud moment in Europe’s history. Ministers turned down the Greek government’s request that the Greek people should be granted a single week during which to deliver a Yes or No answer to the institutions’ proposals – proposals crucial for Greece’s future in the Eurozone...

Greek Lawmakers Approve Decision to Hold Referendum
by Stelios Bouras, Wall Street Journal June 27, 2015 Greek lawmakers gave the green light early Sunday to a proposal by the coalition government to hold a referendum on whether austerity measures demanded by lenders in exchange for further aid should be accepted by the crisis-hit nation...

Greece Will Close Banks to Stem Flood of Withdrawals
by Landon Thomas Jr. and Niki Kitsantonis The New York Times 28 June 2015 ATHENS — Greece will keep its banks closed on Monday and place restrictions on the withdrawal and transfer of money, Prime Minister Alexis Tsipras said in a televised address on Sunday night, as Athens tries to avert a financial collapse....

Travel to Greece: Advice for those travelling to Greece
by Simon Calder, The Independent posted Tuesday 16 June, 2015 Many concerned prospective holidaymakers have got in touch this week as Greece’s financial crisis deepens. A worrying time for the Greeks – but should holidaymakers worry?...
*** *** ***
In the week before we last left Ano Korakiana, Linda, I and Angeliki Metallinos, completed a list of nearly all her grandfather's sculptures and marble reliefs. After three and half hours we had a re-numbered list based on the year of the carving, with dimensions, brief description, and whether in local stone or in marble from Kozani...
...giving us the raw material for a catalogue which, talking to several gallery curators recently, I believe should be created as a website. I'm not dismissing a hard copy. I'm recognising that having information about Aristeidis Metallinos on the web is a better goal. From such a site, easy to edit, different catalogues with varying emphases can be made into temporary hard texts. The web option, avoiding colour or even half-tone printing is also a deal less costly.  I am still exploring who should write about the laic sculptor. On 21st June, I was excited to receive a letter from the scholar - Dr. Eurydice Antzoulatou-Retsila, since 2009 professor at the School of Cultural Studies at the University of Peloponnese in Kalamata - who had first written about Metallinos in 1985, when he was still alive:


Dear Simon.
At last I can communicate with you, because I had terrible problems with my computer all this period, being afraid that I had lost all my archives, but finally all has been arranged well.
So, let me first thank you deeply for your interest in the work of Metallinos. I was feeling the same when in 1982 I had discovered him and I had faced all negative attitudes from all parts of communities in Corfu. But I insisted and I wrote my article then . My husband , now, says that nothing goes in vain and he is very glad with your initiative , because he, himself ( as artist, he is film director) had believed in this work.
Perhaps my interest those days was founded in my work as curator at the National Museum of Greek Folk Art (in Athens) and my interest in what is humble and simple. After all, this had been my first speciality (history archaeology, art focused on Greek folk art, my PhD dissertation was on the wedding crowns of modern Greece, those created in gold and silver and kept in local churches or in museums).
I will be very glad indeed to contribute in the volume you are preparing and actually I am planning to visit Corfu again in September to meet with my old friends there (I was professor of museum studies and cultural management at the Ionian University there from 1994 to 2009), to start a new research I am planning and of course I will enjoy seeing again the works of Metallinos.
This last period has been very hectic for me, because I am retiring  end of August and lots of things in the administration must be arranged (I am dean since 2011…).
I am planning also my new career  (my third one!!)  in music this time (piano and singing as soprano) and I am really very excited. My first career was as curator at the museum (and also creating lots of museums all over Greece), my second as university professor and now as musician. Not bad for a variety in life !!!
So, dear Simon, thank you again for these wonderful ideas you have, I am sharing your interest and I will be glad to contribute. But the greatest pleasure for me is your interest in Greek things, expressed in this very sensitive way, especially this period, where this country and this society is really in a very bad situation.
Be well, take good care, greetings to Linda and let us try to meet soon
Best,
Eurydice

**** **** ****
The amount of greenery to be salvaged from crops, from neighbouring fallow allotments just scythed - in weeds, pods, tops and hay...all for long term composting...

...while the bays by the fence may have produced some humus by this time next year...with one bay providing almost usable soil though full of annual weed seeds. 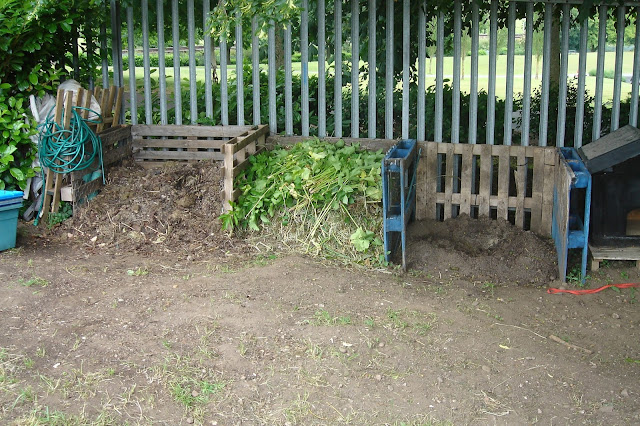 I've realised my friend Ziggi's point that it's not good just growing stuff, however successfully. You must grow it to eat and ensure that you bring it for cooking by agreement with the cook. Don't just turn up like the 'hunter-gatherer' with a bag of veg and expect Lin to be grateful. Check what's needed. Scarf what's to be cropped into her plans for meals. Allow also for the extra time involved in preparation compared to veg off the supermarket shelf.

Once cropped every one of these sweet little parsnips needs to be topped, tailed and scrubbed. 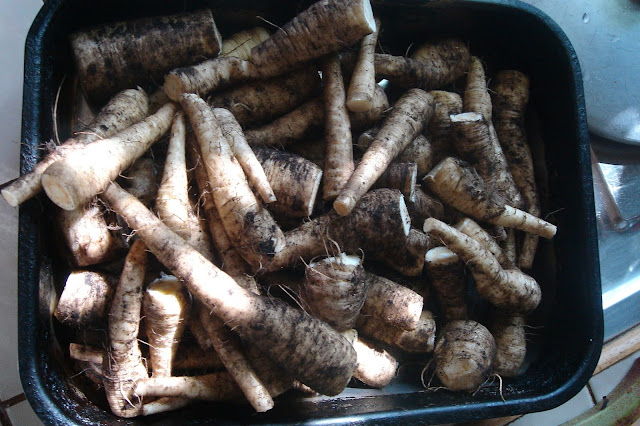 That took me half an hour at the sink, slightly less time than it took me yesterday to shell fresh peas for two, or today, for Lin to shell a saucepan full of broad beans. The same goes for the many small new potatoes that were 'ordered' for a Sunday family supper.. 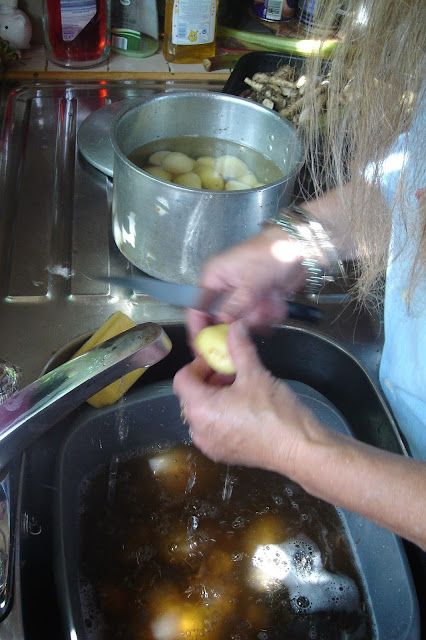 From Amy who brought the cakes to finish the meal: Thanks mummy for cooking dinner for all of us was very yummy and much needed. Liz says thank you too smile emoticon