See the wanton tourist led towards the olive groves on a priapic donkey by a handsome ragged-trousered peasant; Aristedes Metallinos' take on the arrival, in Corfu, of mass tourism. He'll pocket a negotiated charge in more than coin, and she an adventure to treasure. If I wanted the quaint ways of another country I’d enjoy them in our part of Birmingham where polyglottic heterogeneity is the norm; where we've many faiths whose celebrations are held in foreign voices displaying every colour under the sun of an imploded empire; where, to cite a depressing example, there are still parents who will kill their daughters for eloping with someone made unsuitable by faith or family. Many books by foreigners about life in Greece aim to entertain by parsing the exotic, describing with amusement and affection the folkways of 'our' village, presenting local caricatures - endearing postcards from abroad. Thus the sublime inventions that, apart from enhancing their authors' repute, created Greece as a post-war tourist destination by inventing a kind of paradise. 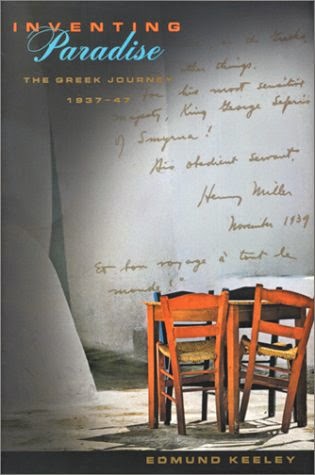 All that’s changed. Edward Said's Orientalism has come home. In Greece, modernisation has made everything familiar and shared. The customers in Corfu Lidl – Greek and foreign – are almost entirely white, where in the same shop in Birmingham we find they're mostly black, with us a little different by skin and tongue. In the Ano Korakiana us un-Greeks are hardly the point of note we’d be if one of us were even slightly ‘mavro’. Our neighbours know more from their TV about the news in England then we. The marriage of Kate and William! They told of viewing the magnificent ceremony on their screen in the dining room; wondered what we thought. We’d seen nothing but folded headlines on passing news-stands bearing international newspapers. Ano Korakiana, even with us and plenty of other foreigners, has greater homogeneity than the road where we live in Handsworth. Does this mean I value arriving here, living here, any the less. Not one jot. But not because it's any more strange than our street in Birmingham, where I delight in most of our neighbours and they most of the time in us...so let us end any idea of Greece as an exotic country far from ours in place and culture.

*** *** ***
The workable space in this house is reduced by rain. Wet weather loses us our small garden for drying laundry, the balconies for reading and eating and the veranda and path beside the house for other things we'd do out of doors.

Nonetheless it's a pleasure to inhabit - for a predicted while - a houseful of nappy talk, the collection and disposal of much extra rubbish, including feeding the cats food particles that fall from small hands and mouths untrained in table manners (note: Norbert Elias on the civilising process), wet-wipes, the discordant symphony of squeaks, wails and shouts of babes, and our shared and constant watch for risk. Oliver sleeps soundly in the room next to ours, though tiny sounds of slumber and waking penetrate the stud-wall separating our rooms. In the morning Lin and I hear clumping and knocks at the adjoining door; a sleepy child emerges to clamber into bed with nan and grandpa. Then in minutes it's 'pitch invasion' ....

...as Amy joins us from downstairs, and perhaps Liz while Matt attends to Sophia, and I'm up making tea and coffee, and, with everyone else, wiping surfaces.
Amid the grey wet weather - rare for this late in April - we've found intervals of sun and sea. 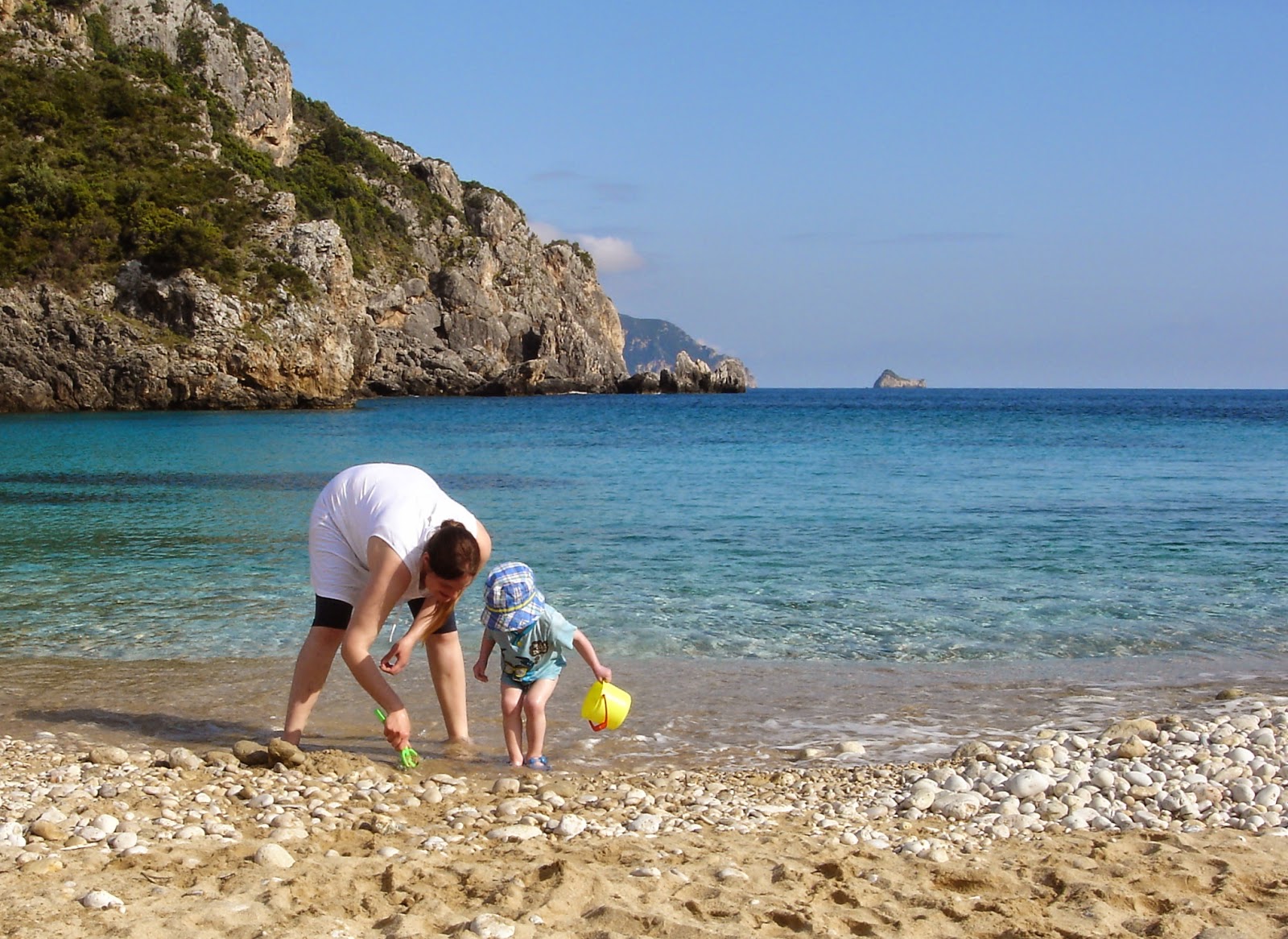 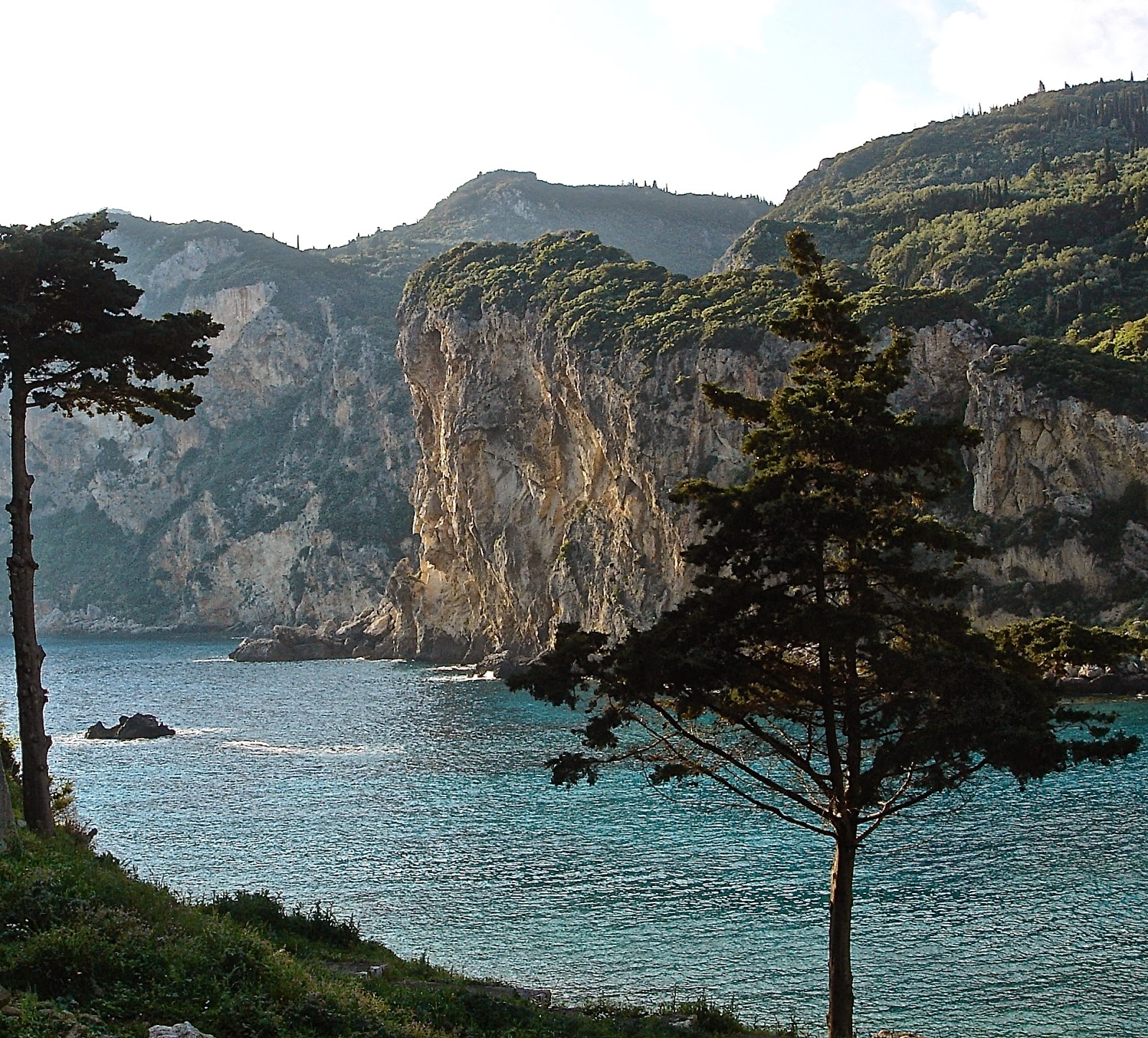 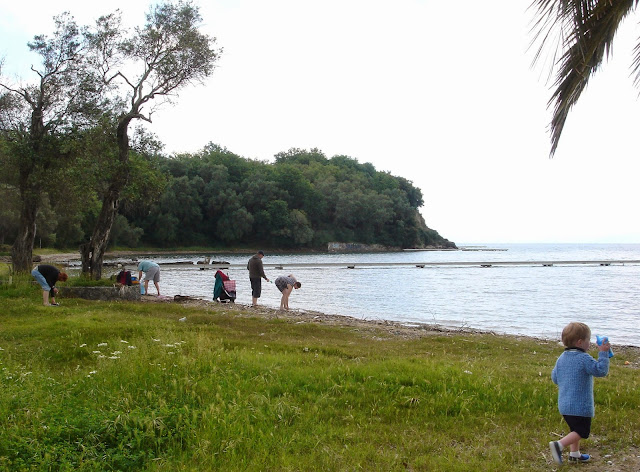 ...and even in wet weather the city is a pleasant place to stroll, enjoy the children's playground at the Bosketto and look out to sea towards Vido, where the ferries pass, and on to the mountains of mainland Greece and Albania.

And on the way home there's Emeral for cakes and, especially, to choose ice cream cones, top them with sauces and sit eating them together as they dribble from tiny mouths...
..and this morning, Sally's at Ipsos - ethnically British with soccer on a big TV, all-day English breakfast and 60s and 70s hits on musak. 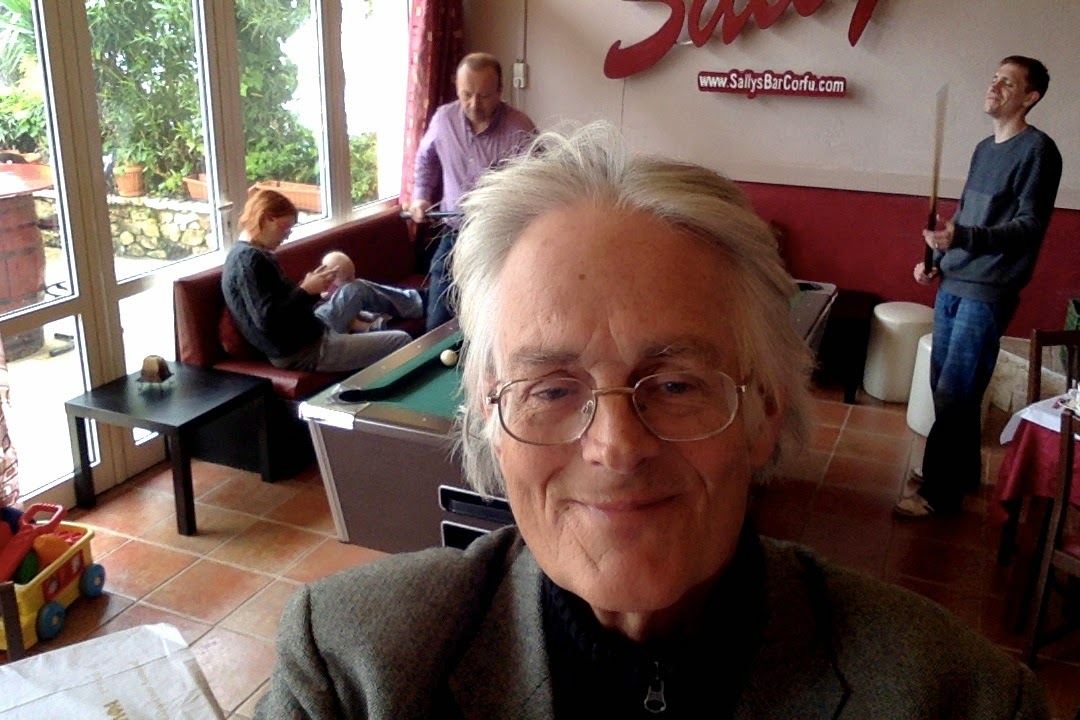