Unused green space in cities, land on which no-one has ever raised a building, is always eyed by interested parties. Unsecured and accessible it becomes a magnet for flytipping, temporary accommodation for travellers, a place to dump old vehicles or to use for free parking, a convenient tryst for prostitutes and punters, dealers and users - neither no-man’s land nor a public good as farmland, allotment site, park or playing field. Builders covet it, having no need to invest in preparing their footings on the rubbled foundations of a predecessor. The green acreage just south of the Victoria Jubilee Allotments is just such green gold. I roamed it in the 1990s when it was still private allotments, campaigned for years to hinder an initial plan to build houses over the whole 7 hectares of the original allotments – set up by an alliance of private plotholders minded to swap their earth for the cash to be made selling it to a builder.
The compromise S106A saved over 50% of the area for the new allotments delivered in June 2010 and now 10 years after the developer, first Westbury, then Charles Church and now Persimmon Homes, got planning permission, the latter has promised delivery in the next 12 months of the rest of what was agreed in May 2004 – playing fields, a children’s play area, a sports pavilion. On 5 September there was a site meeting just outside the gates of the projected sports area on scruffy Crick Lane…

Clll Zaffar who’d prompted the meeting was at another meeting at the council house but asked to be kept in touch:


Dear Waseem. I think Syed Ahmed'’s report to the next ward committee, which I can’t attend, will be more than adequate, so I will not compose my own version of yesterday’s excellent site meeting in Crick Lane, beyond saying that the sight of the early stages of the long awaited children’s play area, ready in 7-8 weeks and approved by previous local objectors, and assurances agreed by all present (Persimmon plus officers of the council) that we would have football on the site by the New Year and cricket by the summer of 2014, was convincing. I may have egg on my face by the middle of next year but I think we are at last going to get our sports area and all that goes with it.
The challenge now will be finding a revenue stream to run and maintain these great new facilities, as Ghaz has already indicated, placing hope in the CDT.
Sted Wallen is interested in helping with the latter as it relates to cricket as  I think he has told you.
I’m away until 5 Nov but still in email contact.
On another matter. Working with HHH over the last year has been a learning experience - even for one who’s lived in the area since 1979. I would v.much like to have a chat with you about the security, social cohesion-waste disposal link. There are some depressing accounts in other parts of Europe, especially Italy, of how waste management once reduced (as is happening in Birmingham) and privatised, creates conditions for the criminalisation of communities. There is as much potential money to be made from selective waste disposal as from drugs and people trafficking. Best wishes, Simon

From Syed Ahmed’s briefing note to Lozells & East Handsworth Ward Committee on 9 Sept’13 on the Victoria Jubilee S106 Agreement in which he refers to the remaining parts of the 106 agreement awaiting delivery – items 3.4, 3.5 and 3.6….


2.1 In May 2011, the City Council (Legal Services) wrote to Persimmon Homes, reminding them of the S106 obligations and advised that legal action would be taken unless there was a new commitment to the satisfactory and timely completion of the S106 projects.
3 Progress / Action Outstanding
3.1 Affordable Housing Provision: 24 affordable housing units have been built and are occupied through partnership arrangements with Midland Heart and Family Housing Associations.
3.2 New allotments: These were transferred to the Council on the 11th August 2010 and £21,620 commuted maintenance was paid in September 2011.
3.3 Handsworth Park and Play Area Improvement: A contribution was received and work has been carried out as part of the Park’s major Heritage Restoration project. £25,000 was received for Play Equipment to enhance the Park’s play area.
3.4 Sport Pitches: Persimmon Homes have rectified all outstanding defects to the cricket square and will continue their treatment work for the next 12 months before the square can be used; expected completion date is summer 2015. The football pitch is complete but now awaiting completion of the sports pavilion before it is used, it is expected to be in operation by January 2015. The pitches will then be transferred to the City’s Children, Young People & Families (CYPF) portfolio.
3.5 Public Open Space: New design specification for a Natural Play Area agreed and work has now started on site with a final completion date of October 2013.
3.6 Sports Pavilion: Persimmon will start building the pavilion upon confirmation of planning approval and discharge of planning conditions. Expected completion date is January 2015.

Perhaps I was exposed to a familiar piece of planning legerdemain but when I phoned Syed at his office on the 9 Sept, before the Ward meeting on the 10 Sept when Lin and I were in Greece, he swiftly thanked me for correcting him and said ‘of course, 2014’.
I will have to wait and see the public domain document that went to ward committee. I cycled round from Crick Lane back into Victoriana Way and had a look at the children’s playground that is to be ready this year. It seems local opposition to this use of the space has ceased and everyone’s happy with design of an interestingly landscaped space, not full of play equipment, more a small hilly arena under the shade, on one side, of mature oak trees, for walking, sitting and clambering. Perhaps I can visit with Oliver before this Christmas. 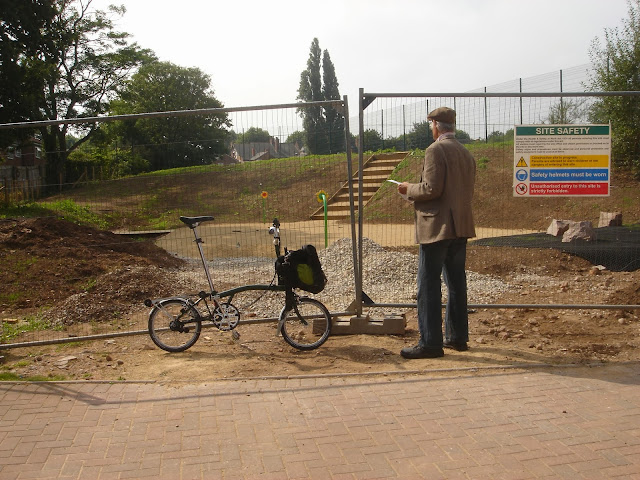 *** *** ***
Lin’s been working a marble patchwork for part of the space under our veranda – marble off-cuts left in a steel bin for anyone to collect beside the road at a stone works near Lidl opposite Alikes Bay and Lazaretto Island. 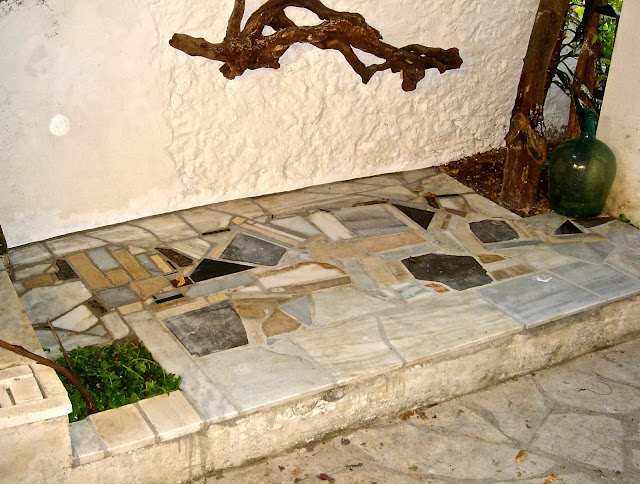 We’ve also put up the doors on the wardrobe in our bedroom – two doors we’d recovered from where they’d been left by wheelie bins below the village. In May Martin had helped us line up the frame and the hinges. Now at last they’re in place - a shelf above on which I’ve fixed a hanging rod. The challenge now is to work out how to fill the remaining space along that wall, using Lin’s sketch as a guide. 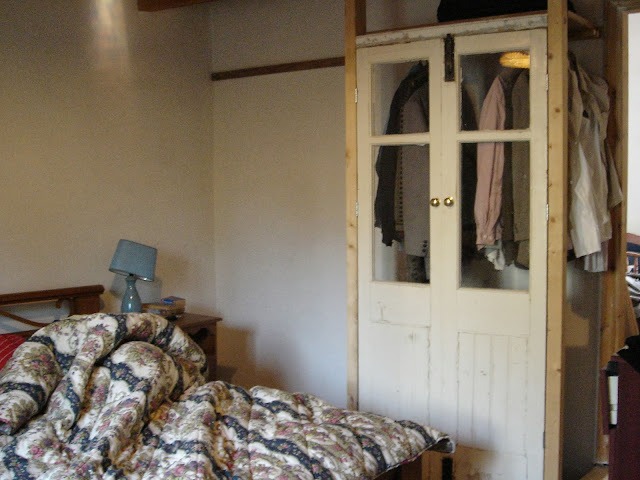 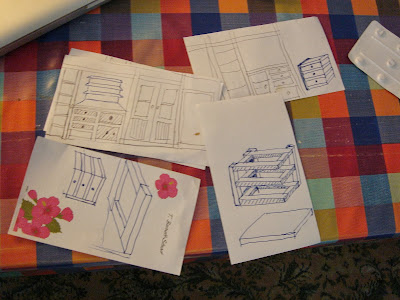 Last Sunday, our last day before surrendering the car for a fortnight, we drove to the north coast to have a late afternoon picnic finding the sea at Agnos Beach, a shore of reeds, hard smooth sand mixed with earth fringing a muddy sea in which floated semi-composted weed, between the new harbour at Astrakeri and a pair of well-maintained hotel buildings that have taken over, almost turning their backs on, the narrowing beach at the eastern end of Agnos, a wasted cluster of uncompleted villas... 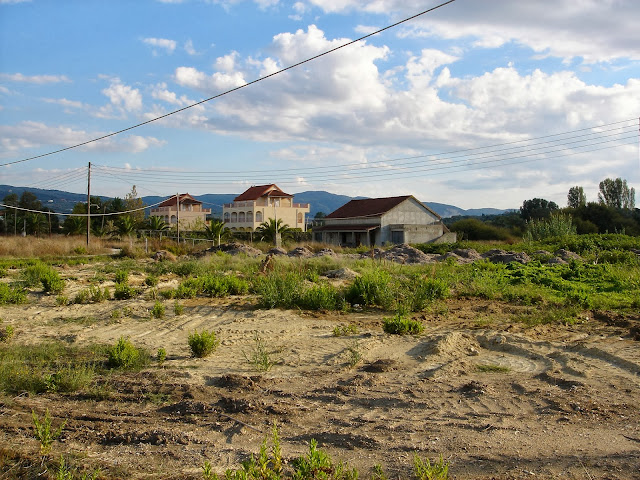 ...a couple of small boats and little used fishing gear – parched nets and marker floats. We wandered through this part ghosted hamlet, blighted product of the all-inclusive holiday – and through the busy hotel, by its tidy blue pool and long bar serving free drinks for guests most of the day. All notices, including the safety guidelines, were in English and German.
“You buy this holiday in UK or Germany" I said "A friendly guide meets your flight, shows you a short walk to an air-conditioned coach bearing the name of the hotel. No need for maps or directions. It brings you here in an hour. You're shown comfy rooms with lovely views over a blue sea to the great Albanian peaks... 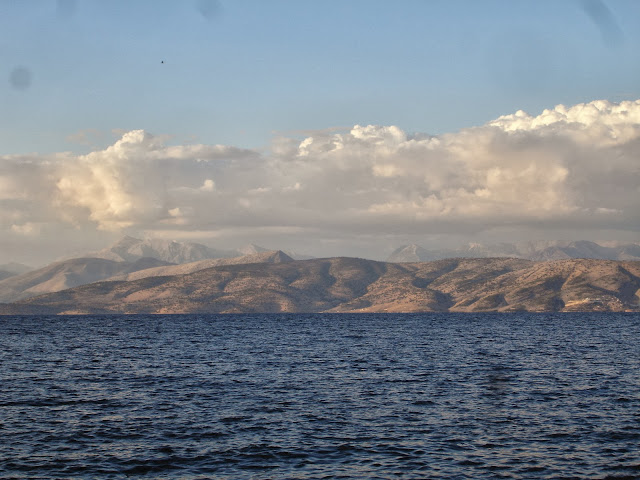 Meals are served at convenient times from a menu in English and German. There’s a pool and a bar with 'free drinks 10.00am to 24.00’ – well, included in what you’ve pre-paid – and wide screen TV with the relaxing murmur of soccer commentary. Outside in a grassed area laced with tidy slabbed paths are loungers and umbrellas where you can relax by the pool or the sea, ordering drinks and snacks. There’s a playground easy to watch and a reliable perimeter hedge and fence around the whole. No need to think of prices, negotiating foreign menus or questioning bills and nothing in Greek. If all you want is to pay your cash and relax amid sea and sun and pleasant shade with reliable food and drink, it’s perfect, with every Friday some local culture, 'a Greek night - all hotel residents welcome’”
Getting to the hotel, we’d wandered through two crumbling abandoned tavernas – one with a fading for sale sign attached - and peered through the dusty windows of several empty buildings with large windows intended as shops whose owners had given up on them before they could be opened for trade. 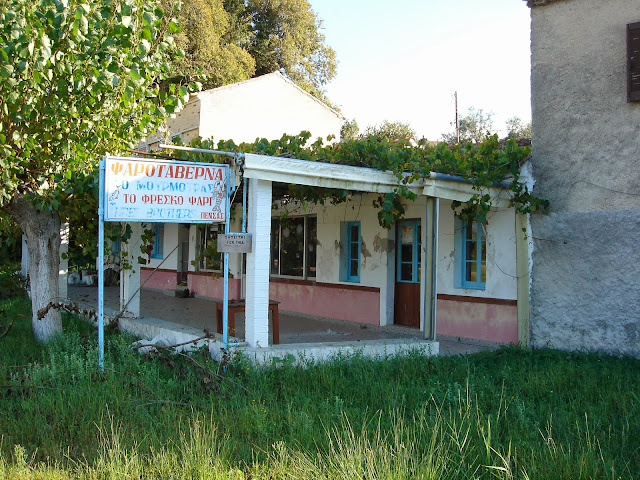