Smell is so seductive; evoking, momentarily, a recollection of sight and touch, before capricious memory amends and revises. Daffodils have no perfume like a rose or hyacinth but for me one sniff brings an embracing feel of infancy, when my nose was closer to the ground. I know the place; who was there somewhere in the background; everything that could be known without words or anything so tangible as a sequence of thought. ‘Intimations’ of course free of my editing ego. Anyone who’s been around horses as a child and left them behind can be struck by the pleasing reek of staled straw and dung mingling with leather and the exhalations of shifting beasts that click on the yard. In infancy I was taken on a pleasure boat trip round Southampton harbour. It included passing the docked Queen Mary, sun reflected from a dizzying precipice of black riveted plates. There were jelly fish hanging in the black water. That besides I knew no more of the sea than holidays with bucket and spade. But for the pages on which I enjoyed vivid illustrations of ships, the sea was not something I knew by smell. The first boat I was to sail on saltwater was built well inland. I associated, what existed in my imagination, with the whiff of epoxy resin, marine ply, varnish and new synthetic paint.
It was at our family friend Denys Rayner’s boat building yard at Donnington, near Newbury 60 miles from where Danica, a 5 ton sailing sloop, would be slipped one enormously exciting autumn afternoon into the grey water of Gosport Harbour.

I was 18, being mentored in seafaring by a man who, though he never mentioned it, had commanded warships in the Battle of the Atlantic...
...been torpedoed, survived and returned to his Ithaca, a Berkshire farm, where in the peace he made a living designing and building small sailing yachts for people’s dreams. My stepfather Jack Hargreaves was taken with the idea of making yachting, hitherto exclusive, more available. He made TV programmes about Denys’ successful endeavours to make a small affordable sailing boat that could potter tidal estuaries at weekends yet hold steady in the deep. Rayner knew and respected the dangers. He was assiduous on seamanship and its responsibilities. He was also a romantic with several novels written by the time we knew him. Denys wanted his designs to go far. Five months after Danica, built of plywood, was launched I’d found myself – with my stepfather’s blessing and a small ad in The Times - a skipper, almost my age, Chris Jameson, who’d worked Thames barges off the east coast.

“I want to sail to Greece” I’d said
“So long as you know who’s in charge” he’d replied
”Agreed”
We sailed Danica to Athens and back – a journey lasting from April to October.  We crossed from Lymington ahead of a gale in a grey channel swell to Le Havre, journeyed up the Seine to Paris, through the springtime countryside of France by canal to Séte and the Mediterranean, on to Marseilles, San Tropez, Monaco, Corsica, Naples, Messina, Patras, Corinth and Athens, then back around the Peloponnese to Zakinthos thence to Malta, Bizerta in Tunisia, and north to Séte again, this time via the Canal du Midi into the Garonne and the Bay of Biscay where, south east of Finisterre, Danica, as Chris was confident she would, weathered her first tempest – an equinoctial gale gusting to Beaufort 10.
I was fledged. I made single handed crossings in another boat to France exploring north Brittany between Granville and Morlaix, then in another – Denys’ first fibre glass design - to Spain across Biscay to the rias around Coruna.
In 1965 Denys encouraged me in a dream of sailing his Westerly 22 to America. I’d just finished university.
“It’ll be your national service” said Jack, whose service like Denys’ had been in a war.
Years later my mum said of that Atlantic Caribbean adventure “I never ever worried about you” I guess the truth of this is that I could not have improved on my parents, their faith in me grew mine in myself, along with their choice of those who taught me seafaring. 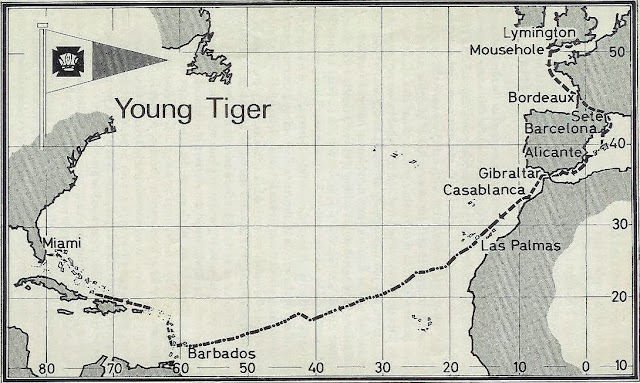 A year later, in a class at the University of Pennsylvania, where I took up my first paid occupation, I tried to learn and do research and follow my stepfather’s admonition “You have had your dream. Now you must earn a living”.
I came to work in London and later in Birmingham, putting aside all interest in sailing and boats (I wasn't going to be a weekend sailor packing up Sunday night for work on Monday when I’d been used to being out on the water again on Monday morning), until, in my late 60s, my daughter Amy, sat at our kitchen table in Handsworth, found notice on ebay of a boat on a mooring in Corfu.
“Come and look at this, Simon” said Lin, who knew my inclinations. I, knowing that a mooring is almost more important these days than the boat, made some phone calls, and clicked ‘Buy now’.
So Linda and I, in 2006, bought Summersong, attached to a rickety jetty in Ipsos.
This is where the smells come in. Salt water filmed in diesel and fishiness and the embracing smell, not of timber or old rope, but, for me, the evocative scent of fibre glass and terylene, foam rubber squabs, varnished plywood and synthetic paint.
Summersong was in poor condition when we bought her; so disappointingly messy, shorter than described and not in the condition shown in the ad photo. I sat in her shabby interior with Lin that first day of our arrival on the island.
“What have we done?”
“I thought you knew about boats” said Lin.
“I did, I do. I’ve sailed to many places”
My excuses were feeble. In later years when speaking of Summersong, a 27 foot Snapdragon built on the Thames Estuary in the early 1970s, I’ve been wont to say when Lin speaks of a rip-off or at best a ‘sorry deal’, “Summersong brought us to Corfu”.
We live in Ano Korakiana in a house we love beside good neighbours in a village at the foot of a mountain with a panoramic view over the sea and mainland Greece, “because of Summersong".

We’ve made small expeditions in her, a few miles up the coast to a cove at Agni, down to picnic at Execution Island and over to the mainland at Sayader, but our boat’s engine was unreliable, her overall condition poor and I was now an elderly man with forgotten instincts; lacking essential reflexes and youthful confidence. Lin does not trust me as a skipper, nor does she take to the pace of sailing and the feeling of hazard when katabatic winds gust down from Trompetta, leaning us abruptly over with straining sheets and odd noises. Through all this we’ve worked on our house, improved and maintained it but neglected Summersong. I decided two years ago we must have a better engine. I must spend money on our boat; not money I expected to get back but an investment in recovering the pleasures of sailing that I’d taken up again and then almost abandoned.
Vital to this restoration - our friends Dave and Trish. In 2007, as we sat inspecting our ill-advised purchase over the internet, it was Dave who said “Your boat’s OK. Just needs some work. We’ll make a list.”
He did things on Summersong for us, but only this last 12 months have we begun to turn the old boat round – a different and more powerful engine, new and more reliable electrics, new rigging, new mast head fittings, new cockpit slides and hatches and a restored interior, recovered squabs, fenders, repaired cabin lining, new curtains, a major paint job on hull and deck, mended teak strakes, new anchor chain, new propeller and sacrificial plate, a grand tidy up of accumulated odds sand ends in bilges and lockers, and the shaking jetty made firm, moorings made more secure to the harbour bed, a replacement roller for the jib.

“She’s retro” says Dave “She’ll never be swift but she’ll be a new old boat”
“Easier to sell I suppose” mutters Lin.
Last week Dave and I took her out of the harbour and I got my first sail, jib only, in three years. It’s a start.
Two days ago we went out again, this time with Trish too and dog Skinny and raised jib and main.

*** ***
Our friend Chris Holmes has sent me this article, via Jim Potts - a piece by the fine writer Nick Malkoutzis in MacroPolis called Nightmare on Democracy Street


...When a group of Golden Dawn supporters recently attacked Communist Party (KKE) members who were putting up posters in the working class neighbourhood of Perama, western Athens, the socio-political dimension of the Greek crisis entered a new, uncertain and dangerous phase. After years of mounting attacks on migrants, homosexuals and leftists, Golden Dawn made it clear that it wants to fight a pitched battle for control of districts like Perama. The symbolism of the September 12 incident did not end there. The attack took place on a road named after democracy – the very same democracy that has been pushed and pulled like a rag doll over the last few years ...Philosopher Stelios Ramfos captures the essence of the sometimes myopic Greek mentality by saying that when Greeks go to bed they do so for the purpose of sleeping or dying but never with the intention of getting up the next morning. Recent events underline that this short-sightedness in the face of a clear political and social threat is perilous. If we close our eyes, it must only be with the purpose of awakening from this nightmare when we open them again.