"What a joy it is to have you all here" said my mother "It's amazing how all the children love Scotland and now their children are up here too. They could have gone to so many other places but they came here. I take it as very flattering."
Sharon took a photo - Mum in the centre with her great grandson Oliver, Amy and me in the shadow. 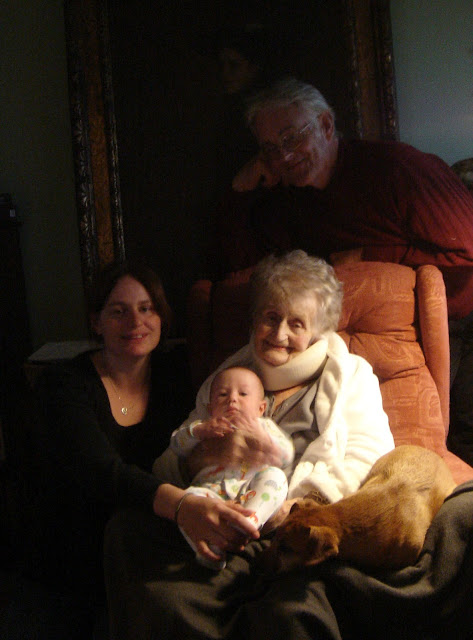 My sister Bay and I were volunteered by James Murray to judge the Pets Parade at the Moy Game Fair, that Angus, my mother's late husband, helped start over three decades ago, and enjoyed ourselves selecting winners. First was a Lhasa Apso, a fearless Tibetan furry toy descended, I learned, from a breed of small mountain wolf, used as monastery guard dog. That took an imaginative leap. It'd go in a game pocket. Joint second - a milky eyed Australian sheepdog and a re-homed Greyhound; third, a re-homed middle sized mongrel mutt with a hint of Scottie and a wonky tail. 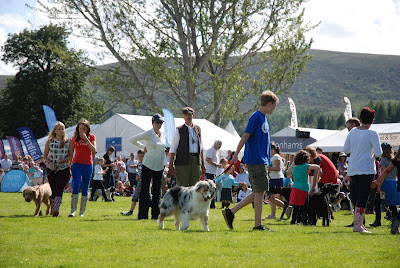 Our choice of winner earned a clap around the main ring. I'm fairly confident we hurt no precious feelings. In the committee tent I took care of Oliver - a novel responsibility. He smiled at me now and then as I re-accustom myself - after 26 years - to the heft of a babe. 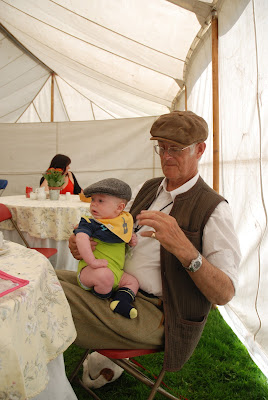 
Simon B: Olympic legacy. Time to check on the VJA S106A playing fields with Ghaz Hussain?

Waseem Zaffar: Spoke to Ghaz earlier. A meeting has been arranged by the council with various concerned parties on 5 Sept. Ghaz will brief us after the meeting. Looking positive.


Hi Everyone, Just to let you know what's happening....

Bank Account
We now have our Unity Trust bank account, but await chequebook, etc. I've transferred £1000 from CHPCP account to the new account as part of the setting up process. I've ordered 2 pre-loaded cards (£12 charge for these) and put £200 on each. I'll set up separate accounting for these, so we keep track of the pennies. They're mainly for fuel for the van, but can be used for other things with Committee approval. We'll only use one at a time, unless there are exceptional circumstances. As one runs out we'll have the other to use, giving time to reload the first. We'll soon have internet banking, which will require authorisation by two of the four signatories.

Public and Employer's Liability Insurance
This is now back in place as from today. I've changed the broker to Finance Redirect, the one recommended by Unity Trust Bank. The company we're now insured with specialise in insurance for social enterprises and other similar organisations. It's about £25 more expensive than the previous company, but, on reading the documentation, I felt that the previous insurance didn't offer the full cover we need for use of portable power tools and mowers, etc. Also we now have £5,000,000 public liability as opposed to £1,000,000 previously. We also have £5000 cover for the tools, which weren't previously covered. Finance Redirect are also a social enterprise and give grants from their trading surplus in areas where they have clients. We'll be able to apply, so I'll find out details when I've got time.
For the insurance we need to have a 'vulnerable adults and young people protection policy'. I'm looking for one that's appropriate for us - not too long and complicated, common sensical and to the point. There are lots on the internet, but they're so long, i shouldn't think the people they're meant for ever read them! I'm going to contact one or two people who might have one we can adapt. If you know of anyone else who might have something that fits the bill, please let me know.

Current Jobs
CMAT garden: Denise (and Dennis) and I went down last week. We finished tidying the frontage, planted the two planters with pelargoniums, did more tidying in the garden and I gave most of the lawn a first mowing, until the rain set in and I had to stop.
Planters in Putney Avenue: This morning Denise rang me and asked if there were any jobs we could do today, so we decided to make a start on the above. I didn't bother sending e-mails - couldn't expect others to come, as it was such short notice. We've cleared the weeds fron the planter on the corner with Putney Road, which is now ready for planting. I'm going to try to get plants this week and hope to do planting next Monday or Tuesday. There's still another large planter to do, so any help would be appreciated. It'll take about 3 hours for two people to get it ready for planting. If you want to help, let me know which day's best for you and what time. I'll bring all the tools.

The Van
Now we're  officially HHH, we need to change the name on the van insurance and on the registration document. I'll deal with this in the next few days.

Community Chest Grant Application
Having received our answers to questions she sent last week, Yvonne Wager has now approved the £4000 Community Chest grant. We'll talk about exactly what we're going to do with it at the meeting on the 16th.

I think that's all for now. Lin