Past midnight and I'm opening my saved up birthday cards - from over twenty colleagues at work... 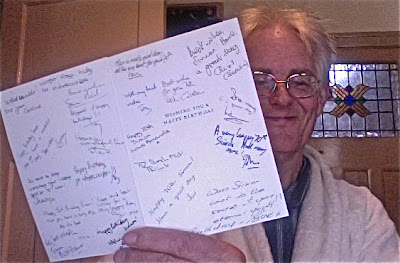 ...from family, in New York `and Switzerland, from good friends, from The Friends of Black Patch Park, on Facebook and by email:


many many happy returns of the day Simon, may you have a wonderful time and may the day and every day in your life be filled with all that your heart desire love from Minoti

Lin drove home alone this evening from a third visit to Stafford Hospital to see her dad who's had two MRI scans for unexplained pains in back and stomach.
"So where's Dot?"
"She's home. So's dad."
"I bet they're glad. What did they say - at the hospital?"
"Osteoparosis"
Rang Amy. knowing she'd been to clinic for a check. Nothing yet.

"I'm having contractions. I can't feel them. Could go on for ages"


From Corfu: Hi Simon, the Haggis was delicious. Did it just like you said with chips and gravy. Yummy... cheers for now Mark

From England: I meant ’neeps’ (e.g. turnips) but I bet the chips were good too and Sally’s superlative gravy. No grandson news yet. X S

Amy came with Liz to see the allotment; helping me water the plot after these weeks of unseasonably warm rainless weather . 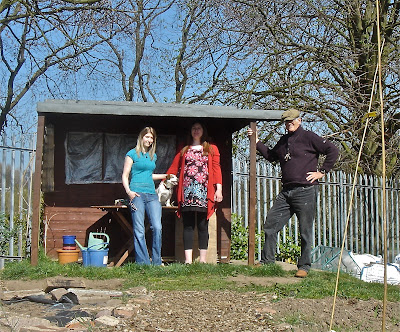 *** ***
And now a trying letter from South West Film and Television Archive:


Dear Simon. Some time ago you asked me to send you a copy of our standard Acquisition Agreement.  I sent this in November 2011 and although I’ve received your generic updates about your ongoing investigations of Jack’s films, I haven’t had a specific response to my email.
SWFTA is now in a position where an agreement needs to be reached as a matter of urgency.  We are about to start on a major project to refurbish and upgrade our storage vault and we no longer have the luxury of being able to allow ‘unofficial’ collections – those which are, so to speak ‘in limbo’ – to take up valuable storage space.
We understand that the Jack Hargreaves material presents specific and complex problems which, through no lack of effort from the various parties involved, it has not yet been possible to solve.  For SWFTA’s part, the material has been kept in good faith for many years while waiting for the rights holder to be found, and weeks if not months of staff and volunteer time have been diverted from other projects to work on the films.  I hope you would agree that SWFTA’s efforts have provided you with a great deal of information that you would not otherwise have had.
We appreciate that a significant investment would probably be needed in order to extract any economic value from the material, but SWFTA is not now, and is not likely to be in the future, able to offer such an investment.  We recognise the historic importance of the material, but if it is to be kept at SWFTA on this basis it needs to be under the terms of a defined agreement, particularly as the material does not fall within our formal regional role as a South West archive.
The films have been under discussion for more than two years now, and no clear solution has been found.  SWFTA’s current circumstances are such that we simply cannot continue to wait, and must urge you to make a decision before Thursday 12 April 2012 when the vault has to be emptied for construction work to begin.
We have identified five possible options you may wish to consider:
1. Remove the material from our premises.
2. Pay for it to be stored at SWFTA.
3. Donate the material formally to SWFTA and sign the Agreement accordingly (hard copy to be provided).
4. If it is of no further interest, leave the material to be dealt with at SWFTA’s discretion.
5. Request SWFTA to dispose of the material on your behalf and at your expense.
I look forward to hearing from you at your earliest convenience.  May I ask you to be sure to copy Bob in on your response as I will be on leave over Easter. Yours sincerely, Jennie...Administrator, SWFTA

*** ***
I'm getting greetings - hard copy, soft copy - writing, text and song via landmail, the phone and web and someone's at the door and Sophia and Niko in Corfu just sent me this. ΧΡΟΝΙΑ ΠΟΛΛΑ !!!!!!!!!!!! ΠΑΙΔΙΚΑ ΤΡΑΓΟΥΔΙΑ: ΓΕΝΕΘΛΙΑ

And from our Greek teacher's fiancee Hi Simon, hope you and Linda are well? Χρόνια Πολλά και πάντα άξιος, φυλάκια από Νίκος και Χριστίνα xxx and from dear friends Paul and Lula in Ag Ioannis, who, in passing, mention they reckon to have fixed the roof leak at 208 Democracy Street.
*** ***
Much of the afternoon I've been trying to sort the problem of what to do about the films and tapes at South West Films and Television Archive - a phone call to Jennie, emails to Endemol, Nick Wright, Fred Dinenage, the British Film Institute (BFI) and Paul Heiney among others, as well as soaking in advice from friends on the Out of Town page on Facebook. Lin's spent the same time working out the correct way to submit a tax return for Handsworth Helping Hands; long phone calls to different tax offices. And in the evening we went to Amy and Guy for a BBQ where my birthday cake was a shed! Amy said she'd felt one small contraction. 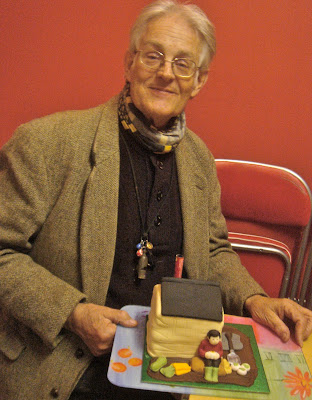 *** ***
In Ano Korakiana today, the Rural Co-operative filed an application in the Corfu District Court to amend the Constitution agreed at its recent AGM.
The hearing is set for 25/5/12. Meanwhile, enrollment of new members continues in order to meet the conditions of the new law as these relate to our Association's drive to maintain its autonomy.

2. Yesterday morning, we were audited by the German contractor as a condition of our certification in the 'traceability, protection and certification of olive oil" programme. The audit covered the first phase of the programme dealing with the electronic recording and tracking of oil from production to consumption.  Since 2010, as agreed by the AGM, the Cooperative has taken part in this programme along with Lafkos and Nymphes - a core activity of the Corfu Union of Agricultural Cooperatives... 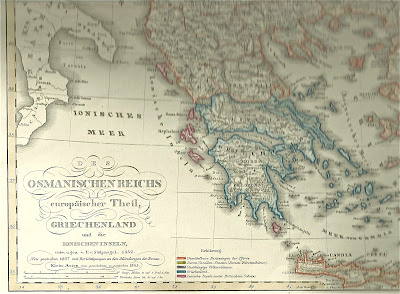 I can see the Ionian Protectorate (unter Britischem Schutz) and the borders of Greece, agreed at Independence in 1832 - no Epirus, Thessaly, Macedonia; no Thrace nor the islands bordering Turkey; no Crete...no railways, tracks not roads and swiftest travel by lake, river and sea. What a land for the free traveller to explore the exotic with the protection of dragomen and bodyguards unencumbered by modern inhibitions about orientalism and risk of condescension.
*** ***
And wine from the Greek side: 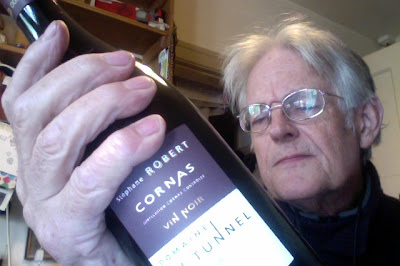 ...and from my daughter, a really good watering can... 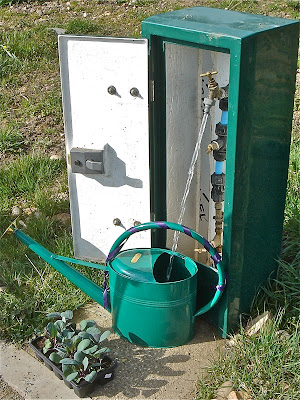 ...with which to water my baby cabbages, laced with twigs to keep away the ravening pigeons 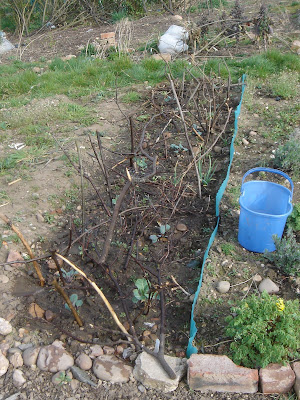