The clocks went forward yesterday and as Amy said on Facebook


my baby is due today, so I guess it'll be a week next Tuesday then! Getting impatient now :)


Dear baby, you have managed to stay comfy till payday, if you arrive in the next 24 - 48hrs there is a good chance that mommy will have money on your Birthdays, so be a good boy and don't keep me waiting too long please. X

It was an important Sunday in Greece being 191 years since Germanos of Patras raised the Greek flag at the Monastery of Agia Lavra in Peloponnese to start the revolution against the Ottoman occupiers, marking the nine year war of independence; for Freedom or Death. That was the story to be celebrated but this was not a happy weekend.

Tansy Hoskins writes in Coalition of Resistance- a mix of despair and hope born of actions driven by necessity:


Athens is a city of lit fuses. Graffiti covers buildings, pavements and statues like an angry rash...However, the crisis in Greece has gone beyond something that an election or a riot can resolve. It runs deeper than the question of who should sit in parliament, of how the debt should be paid off, or if it should be repaid at all. The crisis is now about the very fabric of society, of who should have control and for whose benefit society is run. The 45,000 homeless people in Athens – many of whom spent a frozen winter sleeping in caves – are testimony to the total failure of capitalism to provide a decent standard of living. The loss of healthcare and unaffordable food prices means people are literally struggling to stay alive...But amongst the chaos and the poverty - and abandoned by traditional power structures - people have been taking control of their lives and communities. They face the huge opposition of international capital and all its manifestations but they have no choice – it is do or die. It must work. Otherwise the ramifications will be catastrophic both for Greece and for the world...Ellinikon, to the south of Athens, is one pocket of radical change. In the face of devastating cuts and poverty, people are re-organising the way society is run, both out of sheer necessity and because they have a vision for a new and fairer way of life. The figurehead of this change is the Mayor of Ellinikon, Christos Kortzidis, Χρήστος Κορτζίδης. 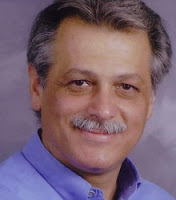 In 2007 he went on hunger strike to protest at the privatisation of beaches and coastline. He is almost shy about this rare act of solidarity and dedication by a politician, giving instead the impression that he simply felt it his duty. Sincerity and strong politics have seen him repeatedly re-elected despite losing the backing of the Greek Communist Party (KKE) and the redrawing of constituency lines. The re-organisation of society in Ellinikon includes the introduction of food and health provision outside of state lines. Over one hundred doctors have been organised into a volunteer force that treats people free of charge. Most of the people who have found themselves without healthcare over the last few years are the elderly and families with young children....

*** *** ***
Sunday evening, at Amy's request, Linda made a supper of one of Amy's childhood dishes - mince and chips. Along came Richard, Liz, as well as Guy and Amy. 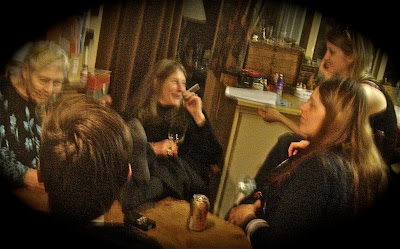 Dot, her nan, my mother-in-law, was there too and we were cheerful, though, Arthur, my father-in-law, has been ambulanced to hospital in Stafford, 30 miles north of us, with undiagnosed pains in back and stomach. Monday and Lin's been taking her mum to visit - they left an hour ago.
Much of yesterday I was on the allotment, digging, sowing, tidying against a backdrop of hundreds of people enjoying a sunny Spring Sunday in Handsworth Park 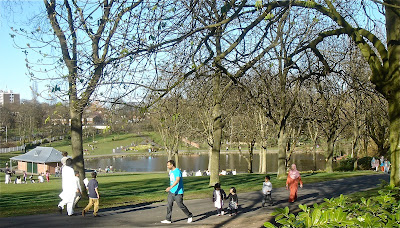 It is almost but certainly not entirely impossible to recall how only a decade ago so many men. women and children, individuals and families, wandering happily, picnicking, sitting, chatting, talking, walking, running, cycling, scootering, in Handsworth Park would have been unimaginable. I recall such scenes in Birmingham's Cannon Hill Park back in the 90s and in the London's royal park's - Hyde Park, Green Park, St James Park and Kensington Gardens - which hardly faced the blighting of urban parks across the nation from the early 1970s, deepening to a thousand small disasters of neglected vandalised public space during the 1980s, a trend that ran parallel with the loss of allotments and playing fields. I can recall wondering how unlikely it seemed that things could get better - but very slowly as a result of nationwide concern at the decline of urban parks, research into the vital role of green space in cities, relentless local lobbying, intelligent negotiation between the local council, the Millenium Lottery and people across Handsworth, it did get better, far better. Now here, a quarter of my life later, sharing the imaginary campaign decorations of a peacetime activist, I'm striving to compensate for being several generations separated from the land, trying to grow things on my first and only allotment - another space similarly won.
Half my time I potter uncertain what I'm doing, trying to make things tidy, sitting and looking, sweating with the spade and fork to uncertain effect, determined to perservere but knowing, as once I did in classes on subjects that were not my forte, that I'm among the failing students, who 'must try harder' and 'listen more', who 'will never be any good at' gardening. The joy, of course, is that I suffer little of the humiliation of the innocent pupil imprinted with discouragement. I think rather of King Robert the Bruce in the cave watching a spider struggling to build a web, who swings and swings at a gap across the cave until on her seventh try she covers the space and sets the strand on which to weave her web.
"Try try and try again and if at first you don't succeed try and try again"
Who taught me that as a child? I'm pretty sure it was my tough great grandmother, Lucy Halkett, who had a lot of time for not giving up. I recall now that she added the fact that Bruce apart from going on to win the Battle of Bannockburn "never from that time hurt a spider" nor indeed would any true Scot. That's true of me, rescuer of spiders struggling at the sides of the bath. Thank goodness all my relatives feel the same. Dot will repeat the maxim "If you wish to live and thrive let a spider run alive?" and, when now and then, Lin who must also have learned from her mum, sweeps an old web away, she'll mutter "Sorry spider" 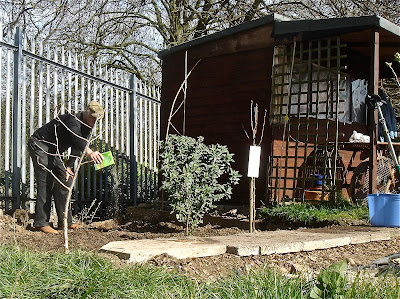 Yesterday I spread a wildflower mix on a patch of the plot where I've already planted a few Buddleia and a sapling balm scented poplar - a tree that grew in abundance at Mill End Dairy Farm, by the cottage in Clavering where I was born on 29 March 1942; transplanted to my mum's home in Scotland, a cutting taken to Birmingham from whence I've taken another to Plot 14 -  a scent that for a micro-second recalls my life. 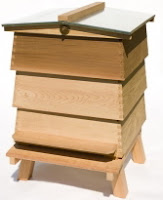 On this small space I've invited Gill Rose, our neighbour, to place her bees next month; their hive to face the west side of the shed, so that on leaving they'll rise over its roof to follow their preferred track. All surrounding gardeners approve, which is all the Council worries about when approving bees on an allotment [See Open Air Laboratories (OPAL) on Bees in the West Midlands]
*** *** ***
I'm so enjoying the book I was given as an early birthday present. Bible: the story of the King James Version by Gordon Campbell, who makes a correction in Genesis 24:63 which reads '...and behold, the camels were coming' which should in fact almost certainly read 'behold, the Campbells are coming' (a letter to my grandson on The Bible)


It would be difficult now to bring together a group of more than 50 scholars with the range of languages and knowledge of other disciplines that characterised the KJV translators. We may live in a world with more knowledge, but it is populated by people with less knowledge. 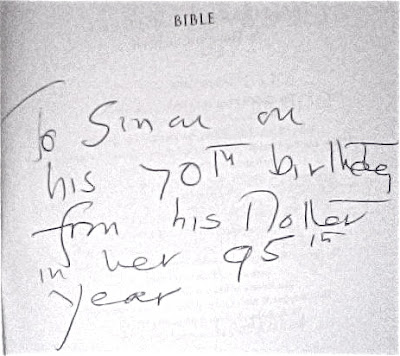 Maria Margaronis? Now here's a writer and journalist who knows her Greek history...
Greece in Debt, Eurozone in Crisis - last July...Just as the migrants have become the scapegoat for the Greek people’s suffering, so Greece has become the scapegoat for the structural problems of the eurozone, as well as for the failures of neoliberal orthodoxy. If the medicine isn’t working, it must be the patient’s fault. Greece’s entire economy is worth less than 3 percent of the eurozone’s GDP; the obstacles to a more humane, realistic and lasting reform are not financial but political...

As Greece stares into the abyss, Europe must choose on 12 Feb'12...The crisis has intensified old splits in Greek society. You can see it in the polls, which show support ebbing from the centre to the edges of the political spectrum, and especially to the fragmented left. You can see it, too, in the historical parallels people reach for in a vain attempt to name this unprecedented nightmare. Protesters chant slogans from the dictatorship of 1967 to 1974, comparing the deal's Greek enforcers with the CIA-backed junta. Both left and right talk about a new German occupation – an understandable reference given that Germany is calling the shots and that Greeks last queued at soup kitchens in the 1940s, but one that can edge into racism or crude exaggeration, as in a recent headline that read simply "Dachau". Both those tropes call up the silent ghosts of the Greek civil war, which launched the cold war in Europe and outlawed the Greek left for the next 30 years. In this story, the west plays the part of the repressive imperial interloper. For the liberal centre, this is populist anathema. To them Europe is still Greece's heartland and its hope, the only guarantor of liberal capitalism, human rights and democracy.

Athens Burning on 13 Feb'12 - Greece now feels like a labyrinth with all the exits blocked. The new austerity program, which includes a 22 percent cut to the minimum wage (32 percent for the young) and 150,000 public sector losses cuts by 2016, will further sink an already devastated economy. Unemployment is above 20 percent (near 50 percent for the young); manufacturing output fell by 11 percent in a month; tax revenues are down 18 percent since last year; 60,000 businesses have closed since the summer. If you ask people on the street if they would rather Greece went bankrupt than accept further “measures,” they point out that Greece is already bankrupt; that many public sector workers haven’t been paid in months; that hospitals have no bandages and schools are short of books; that the poor are being wrung dry to pay the banks....

Greece in Meltdown on 19 Mar'12 where Margaronis leans towards departure from the Eurozone, and a return to the drachma  - What’s going to happen next? Unless Europe bends, unless the intolerable pressure being put on Greece is lifted, I can see only more misery. In less than two years Athens has changed from a reasonably prosperous European capital to a broken city full of hunger and homelessness and the husks of empty buildings, where black graffiti and red “For Rent” signs cover all the walls, where junkies shoot up at midday beside the National Library, where people in the street no longer meet one another’s eyes....[this grim prognosis matches Richard Pine's in his Irish Times op-ed of 21 Mar'12]

....and Margaronis knows not only Greek history and its presence in the crisis, but a whole lot of other things, thus her piece back in 1999 The Politics of Food...and...and. Her immediate family are hardly less talented. See Don David Guttenplan
Posted by sibadd