What I wanted them to see

These days it’s tricky, even in Birmingham, where for two centuries men and women sweated a living amid a vast stubble of chimneys belching smoke and steam over middens of soot and clinker beside turgid waterways through which horse drawn narrowboats edged night and day between workshops making widgets for the world, to find a part to solve a household problem, a gasket, a metal plate, catch, strapped hinge, a reverse pintle, bracket, fastening, matching handle, screws, nails and bolts of particular length and gauge and other needed devices lacking exact names. Things are made somewhere else, the sweat and dirt transferred to hungrier places.

This is nearly the same in Corfu though it does have small workshops dotted about. Here the difficulty of finding a widget is increased by the challenge of describing its specificity in Greek (Greece can surely accommodate its own version of that memorable ironmongery sketch by the Two Ronnies that starts with a request for “fork handles” or possibly “four candles”).
We’ve found a mix of gesture, sketching on a counter or scrap paper and pidgin Greek evokes a slow steady comprehension, interjected by checks in the direction of evolving agreement until we arrive at a pleasing glow of acknowledgment that our shakily communicated request has been understood. Relieved we wait for the shopkeeper to retreat into one of many multi-stacked aisles to bring what we want.
“Ah ha. Of course. I understand now what you need. No.”
His understanding smile plus hands and all his body transmutes, and we return to conjecture as to where in Corfu, across Greece or indeed the world, the desired item might be found. Like long waiting for a bus you can be glad to see one going in the opposite direction, for proof they even exist. A good ten days ago we needed small black plastic catches to secure the foot of one of the mosquito screens on one of our windows which kept shooting up on its rolled spring escaping originals wrongly footed. After fruitless diversions, questionings of regretfully unknowing friends, getting us nowhere, on the basis of a clue as opaque as a hint to Sam Spade, I was cycling and walking up and down streets on the south west edge of Corfu town, following a succession of contrary but accurate directions. I came at last to a shaded workshop on a narrow road that had crossed Margariti on the way to the airport where my gestures including the imitation of mosquitoes, the pulling down of a screen and two bent fingers as I crouched going “kik, kik”, quickly brought a box of black plastic mosquito net clips, a swift demonstration of how they worked, the handover of an opposing pair, and a complete refusal to accept payment, despite my obvious jubilation including the beginning of an un-English embrace – a touch on the other’s shoulder “I’ve been looking everywhere…ψάχνω παντού για... ευχαριστημένο!”

My stepfather enjoyed showing widgets used for pre-industrial farming, things either sent by viewers or which he'd encountered. Some were familiar, some unknown, so he'd show them on the tele' when broadcasting in the 1970s and 80s (this too). 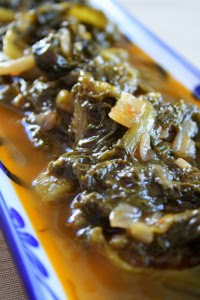 ...grilled sausages, feta salad with green peppers sliced sweet onions and beef tomatoes, saganaki, fried vegetables and to finish a slice of sweet squashy cinnamon coated pie and Greek coffee attended by hovering wasps, interested cats. Distracting them with a wave becomes a reflex, punctuating conversation about the decades since Tony and I first met...
Before they were expected the previous Wednesday, Linda and I had done lots of tidying.
We waited their arrival late that afternoon.
We would normally meet guests at the port or airport. Instead, being carless, I’d given elaborate directions so they, driving a hire car from Athens, after taking the ferry from Igoumenitsa, could find our house. Listening out, I could tell them coming up Democracy Street. A local would have driven faster, less tentatively. I’d written ‘we’re just past the church of the Archangel Michael’. They’d seen it and paused and I, waiting on our balcony for their arrival, saw them coming by and pausing again.
“Tony!” I called to the back of the car.
“Hullo!” said Helen.
“They’re here” I shouted to Lin indoors, as another car bringing Lefteris and Natasha, our neighbours home from a funeral in Agoria, pulled up behind. In a moment we were carting suitcases down the steps. Mark’s and Paul’s Dad Phil who was having a drink with us, guided Tony to drive on to a parking place and brought him back to us.
So having met and become friends as we set out on life’s journey – he 26, I two years younger – we met again – he 71, me 69. We shook hands in the street.
“So. We made it!” I said “…and as I was saying before we were interrupted …” Can we, I thought, get on with your thoughts on existence, infinity and indeterminacy – ideas we’d discussed with fervor all those years ago, Tony introducing me to Feynman, Gödel, Schrodinger and Heisenberg skirting, for me, ineffable mysteries of time and space. They brought presents, blue woven table mats, a set of white table napkins, a book about the wonderful house they’ve built in the wooded hills of Connecticut and a book by James Gleick The Information and a Schubert CD.
That evening I walked them around part of the village, up to Venetia, down the narrow path by Agios Jacobus, where the procession goes at Easter, and so back to our house via the lower road explaining the views as we came upon them – distant Albania, Epirus, the Old Fort that marks Corfu town to the south, and the story, as much as I knew it of our village.
On Thursday we picnicked below Angelokastro the fortress on a rock pinnacle commanding a view of the southern Adriatic and the high cliffs of western Corfu, descending to the tawdry shores of Paleokastritsa, on a tight bend of the descent we stopped at George’s souvenir shop, bought bottles of his village wine, and climbed again to the lovely monastery teeming with visitors.
On Friday Tony rose in the gloom, came upstairs and went out on our big balcony to see ‘rosy fingered dawn’ silhouetting the mainland mountains over the Kerkyra Sea. 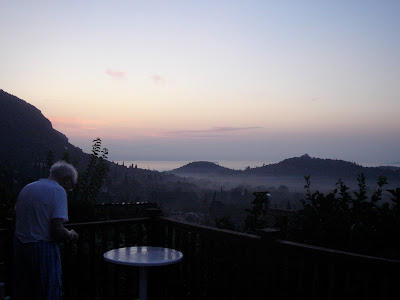 We stayed home the rest of the day with plenty to do as they went exploring south towards lake Korission, saw the blighted eastern littoral, worked their way into the wooded hills along narrow roads where even with Stephen Jaskulowski’s excellent map, now a decade out of date, they missed an intended circuit that would take in both coasts where the island narrowed. I think they lunched in Ag Mattheos; swam from Ag Gordis before returning to Ano Korakiana for supper with us. Tony said they passed through one village in the south that looked desperately impoverished, and we've been sharing with them what we know of the crisis; how it strikes our neighbours here, Greece and the rest of the world.
On Saturday we went to town, strolled up N.Theotoki, up the Liston, around the Palace of St Michael and St George, through the Durrell Boschetto and into the Old Fort to gaze over the gentle blue to Vido, Pantocrator and the mainland, retraced to take a coffee, baklava and ouzo at Zissimos on the Liston...
...then a shopping amble down narrow Odos Ag. Spiridon, peering briefly into the cathedral, rejoining N.Theotoki and so home, to rest before supper at Strapunto, the taverna on the turn to Kato Korakiana.
On Sunday we sent our guests off to explore ‘Kensington’ – the cornice road from hideous Barbati circling the north east with its view over the Corfu Channel to Butrint and Saranda in Albania... 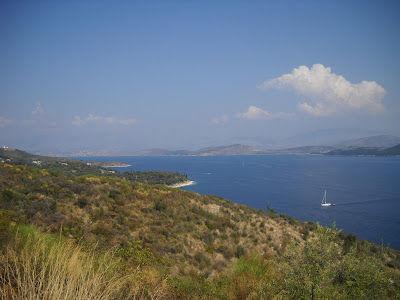 ... taking a meal at a Toula's by the sea at Agni, thence the north coast as far as Roda from where they turned south through the Trompetta mountains to join the Sidari road west of Skripero bringing them home with a few hours before our party for them under the walnut tree in Effie’s and Adoni’s garden...from the Ano Korakiana website, by one of our guests, Thanassis Spingos:

** ** **
I'm again studying When Tomorrow Comes; struggling with it as I try to make sense of this report of an extended debate over recent months on the future of the public domain and the role of government, especially local government in England and Wales. It's not easy following the recorded conversations of people seeking new ways to understand public services, citizenship and community - always hazy concepts. A couple of times in the last month I've put the document down in a mixture of vexation and incomprehension, but I keep coming back to it, mining the text for things that make sense, underlining phrases, adding comments, getting a feel for the conversation behind this difficult text. 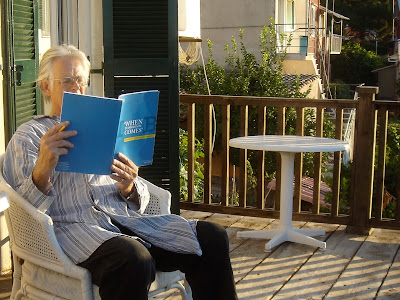