Two kinds of party on Corfu

On Saturday where Paul’s and Cinty’s home perches at a bend on Democracy Street, its terrace entered  from the street, with a vertiginous drop over a low wall to the lower part of the village, there was a gathering of their family and friends. Almost immediately below the terrace there are two narrow derelict private houses, their rooves, over frameless walls, almost entirely collapsed with bare fissured beams sagging under the few clumps of tiles that haven’t fallen into an interior lather of collapsed floor, forsaken furnishings, insinuated brambles and climbers. A hundred yards beyond, having avoided the heat of the day, someone was hammering inside one of the many houses in the village being renovated - signs of activity inside its smoothed interior. I sat on the wall nursing a chilled beer inhaling the smell of barbecuing meat and smoke serving to keep mosquitos at bay, listening with the agreeable passivity of a guest, to the sounds of food preparation inside the big kitchen of the village house that Paul and Cinty have been immaculately renovating over the last two years.
“See over there” said Phil, Paul’s dad - recently arrived from chilly England “that house with the small window in the gable end” he pointed over the rooftops below to another house I’d not seen. “They’ve been working on that all day right through the midday heat, putting up a cantilevered roof and balcony. The speed they work!”
It was a party for Paul’s 50th birthday, with family and friends invited to a spread that was gradually and effortlessly brought out in bowls and trays from kitchen and barbecue and, before that, biscuits to carry one of Paul's younger brother Mark's rich chickla, pigeon and chicken liver pâté topped with scarified butter and bay leaves from his and Sally's tree in the garden further down the village. Lin and I sat with Cinta’s mum, Natalie, and Mark and Paul’s mum, Sheila, at one end of a large teak table sipping iced drinks, served the readied food by young people bringing dishes and cutlery and “anything else you need”. I took in how the people at this Greek and British gathering full of cooking, drinking and eating, men and women, young and old, were neither too thin nor too stout, the daughters and sisters and nieces so singularly female shaped, lithe and tanned and dressed, not to kill, but to be simply beautiful, uncovetously happy, smiling, laughing so unself-consciously I felt my gaze almost voyeuristic. Our friend Paul McGovern had said there are two kinds of parties on Corfu – one is flash "showing off who you are and what you have" and "the other you enjoy". I was treated discretely, perhaps unconsciously, with Mediterranean respect for elders. We were looked after without patronage, service matched to my enjoyment of being attended to – and what food we had. Beside the rich greenery of salads came belly draft, chicken satay with sauce to hand, souvlaki, spare ribs with piquant dip, lamb chops perfectly scorched rich with tender meat, spicy Greek sausages striped from the BBQ grid, chicken wings and legs in abundance with a plate to hand to discard the small bared bones that could not be shared with the two Jack Russell terriers wandering between our feet after treats. As we sat, and drank and talked Mark came over to me with a small exquisite tasting piece of reddish meat, a perfectly cooked woodpigeon breast.
“How did you marinate that to make it so tender?”
“Nothing” he said “That’s how it is.”

I love how Homer describes the preparation and cooking of meat in the Odyssey. Read in unlikely places, his eternal words purvey the anticipation of feasting amid surrounding dark. The breeze was balmy curling the smells of food and smoke among us, dispersing it into the starred darkness through which now and then we glimpsed the lights of planes, soundless above our chatter, heading north and south. Some time in the evening I got a text message from Richard saying he and Emma would be coming out to stay with us in October. We debated experiences, spoke of families, of trying to imagine being grandparents, of films we’d seen and books we’d read, of fear and fate and the vexatious irritations of getting old, of the riots in England, the dignified words of Tariq Jahan that seemed to set a new tone and turn a tide, the parlous state of the economies of the world, of places visited, comparing the difference between people in the village who live in the same house in which they were born over 60 years ago, and others like me who have no such special link to place, hesitating to choose where, if allowed, they’d hope to die.
******
This long hot rainless weather, sometimes humid, reduces the variety of cloud formations and the shadow play of the sun on pillared cumulus above the mainland that so delights in cooler weather. The sky’s vaguer; so also the land. Then on Monday morning as forewarned everything changed. 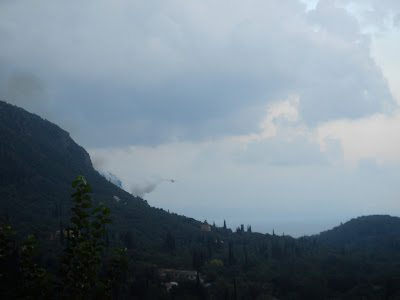 The clouds darkened and there began an overture - remote rumbles of thunder and small jabs of lightning with pinprick showers - preceding the storm to come. But first bush fires started below us and beyond Agios Markos where smoke started climbing the side of the cliff that marks a northward turn of the mountains above the village. From the south came the fire engines lights flashing; then the prop planes slid slowly in dumping well aimed water. Within an hour it was raining chair legs blowing spray through any open window. We'd already got everything that needed to be dry indoors as water began to spout from the downpipes, streaming down parched Democracy Street in sinuous bubbled rivulets. The same day our neighbours, getting news of an in-law's death on the mainland, have taken a coach from Corfu Town, and will be away three days leaving us bereft of the summer sound of their laughter and chat at the table where they and friends gather just below Democracy Street.
*** ***
Tomorrow we expect our guests, Anthony and Helen, today visiting Delphi; tomorrow driving north along the north coast of the gulf of Corinth then turning north west via Metsovo to Igoumenitsa. The island's lost much of its three phase electricity, so we have lights but no domestic water amid the pouring rain. I've put big bowls under our drain pipes.
Posted by sibadd