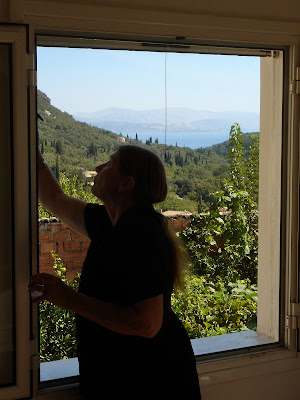 So far, being without a car has been no problem. Fresh bread.occasional vegetables, can be bought from the shop yards away. We've plentiful milk and a fridge of food from our last big shop with Tony and Helen the Saturday before last. The village is our world. We read, do jobs, eat, gaze. chat to neighbours, check email and skype with family and friends at Mark and Sally's 100 metres up Democracy Street, watch films from across the world on the laptop, talk, recounting memories, dreams, the troubles of the times...we're at a tricky turn in our species' residence on Earth - at once immensely powerful, potent with recent knowledge of the infinite reaches of space and time - dimensions neither known nor believed until hardly a century ago - drowning in our numbers and our feckless chase for unsustainable wealth accelerated by the striving of the majority to imitate the feckless acquisitiveness of a prosperous minority - us among them. Lin and I amid our debates agree on the futility of nostalgia. Wherever we're going is not backwards. May it not entail some retracing of our present momentum to understand where we went wrong; learn from that compass error around two or even one generation ago - a short period that has progressed in its unfortunate direction with the accumulating pace of a runaway carthorse that neither it, its driver nor bystanders feels able to slow to a halt?
Round midnight we were watching a film on the computer. Lin said “What’s that light out there”. We went out on the wooden balcony and could see a - momentarily - a flame-red flicker behind distant clouds; high to the south beyond land, out in the fishless Ionian Sea west of Levkas, even as far south as Cephalonia. Irregular intermittent, soundless and in the same part of the sky which above us was starlit and clear.
“It has to be lightning. Maybe fifty miles away.”
I thought of other times and places where someone might have said “No not lightning. Guns, missiles.”
We stayed watching for a while wondering about closing windows, bringing in cushions and carpets outside, in case of rain in the night, stood on our wooden balcony which in places creaks when we step on a plank raised by the heat of the sun.
No-one sensible builds wooden balconies in Greece. The one on which we stood, not the narrower permenant one of concrete with metal railings from which we see comings and goings on Democracy Street, but across the side of the house facing south affording a view to die for... 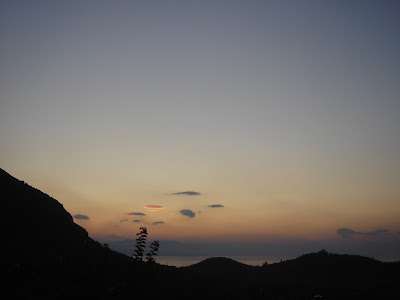 ...put together by John the jerry builder for the last owners, resting on brackets attached to the house at one end and a beam that sits on three cement rendered breeze block pillars at its front, built of untreated deal, which in the last few years has wilted under baking sun and the mighty rainfalls of winter – splitting and shrinking. We’ve treated it with creosote – our own mix of diesel and tar, but that’s no assurance of greater permanence. We’ve pondered solutions. Why not substitute a concrete platform for the present? Good question. Two answers. The breeze block pillars would have to be replacd with concrete ones to provide support for the greater weight and we’d likely run into planning and tax problems getting it made. Expensive and complicated. The advantage of a timber balcony is that its not legally designated a permanent structure – so needs no planning permission; incurs no extra property tax. So what can we do to stop its steady decline? Treat the wood of course and replace the shakiest planks and beams. But what then? Wood’s OK for windows and doors if maintained, though most new houses use metal for these including shutters, but not for the large flat surface of a balcony. We thought of covering the planks with roofing felt, sealing the seams.
“That’ll melt in summer, stick tar to your shoes and burn bare feet” said Paul our neighbour.
A recent proposal was to cover it in sheets of marine ply. Expensive but not too difficult.
“Trouble is it’s still wood and we still have to treat it every year and how can we seal the seams for certain?” said Linda "We’re not only wanting to protect the ailing wood, we want to be able to sit, work and hang laundry underneath the balcony when it’s raining!” 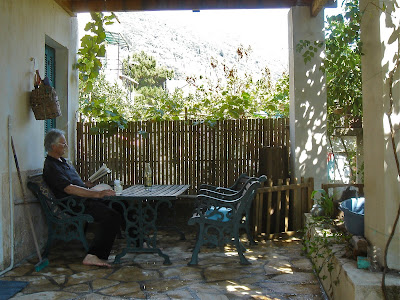 At the moment this balcony's a sieve; shady and cool in summer, but offering little shelter in winter. Anything left below in hard rain gets soaked. Our latest solution is a large temporary cover of polythene sealed at the wall of the house, and laid over strips of roofing felt cut round the balcony stanchions. ‘Temporary’ because of course it may need to be taken up to check the wood and this shouldn’t be made tricky and, because being polythene it’ll be brittle and cracked after two years and so need replacing. But for €20 a sheet or just a little more in two years that’s a reasonable running cost. We’ve plenty of felt left from replacing our roof two years ago. That’ll last under the polythene and won’t get too hot there, we think. 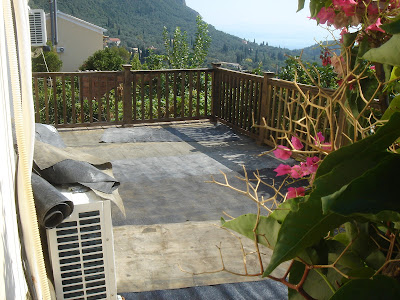 “It’ll look awful. How do you stand chairs and tables on the polythene? The legs will rip holes in it in no time.”
We’ve a wealth of old carpets and blankets to spread over our big plastic sheet. They’ll sit there in the good weather, swiftly drying out after a shower or even a few day’s summer rain. We store them in the apothiki when we’re away and in winter and if there’s a sunny spell it’s easier enough to spread them out again. We’ll see. The job’s part completed and I’m looking forward to seeing if, when next it rains, the space below the balcony becomes a proper veranda – cool when it’s sunny, dry when it rains. 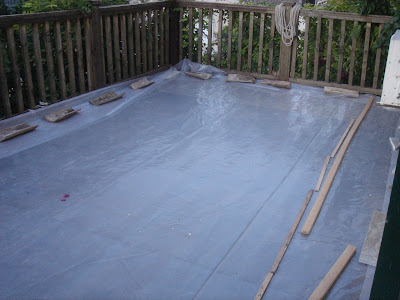 *** *** ***
"We are fighting a war against fish, and we are winning" An American in Alpha Bank the other day asked me where he could find a fish restaurant in Corfu
“There'll be fish on menus in many restaurants” I said “but you may find it disappointing. Unless you are somewhere a fisherman has, by arrangement, delivered a lucky catch from the sea, or a restauranteur has bought local fish fresh from a market seller, they know the seafood you can get here will have come from some other part of the world and will have been frozen.”
Tony told us that at one restaurant they stopped on their way here it said on the menu as though to inform “before we asked” that ‘All seafood we serve has been frozen’. I mentioned a fish restaurant we knew at Tzavros; another we’d visited with Alex Kapodistrias, near Benitses, both of which despite specializing in seafood had served unexciting fish, and calamari which had almost certainly been frozen. I didn’t mention another we’d been to at Kontokali three years ago, and never visited again, after being charged outrageous prices for a plate of ill-served small fleshless bony bream.
“It’s very expensive” I said “and even that that’s fresh will come from EU funded aquaculture, fish farms – ιχθυοκαλλιέργεια - in inlets along the coast – Corfu and the mainland; fish with a bland and sometimes muddy taste”
He looked confused. I wasn’t being helpful. He was having to hear a speech.
“We’re all fished out across the Mediterranean. No fish restauranteur is going to tell you this. They keep it even from themselves. People still fish. There are still fishing caiques on the postcards, festooned with nets. Look off the harbour wall you’ll often see fish. Now and then a fisherman will have luck, but the Mediterranean’s near dead for fish - even deep down. The factory ships from Japan have hoovered up what’s left, here and across the world. It’s over. Until we come to our senses. Get less greedy; give stocks a few generations to recover. Learn some substitute for turbo-charged industrialised fish extraction. Enough odd prizes maintain the illusion that god provides. For our need not our greed I’m afraid.”
** ** **
Miriam skyped "Come and see me in A Day in the Death of Joe Egg. Citizen's in Glasgow - late October, November?" I put a few days in the diary. In a way i don't like this. It marks a time when we are not in Ano Korakiana. This place is not for holidays, not even a second home. It's as much home as Handsworth. We inhabit two places, actually and, when away from one, in our imaginations. There's much to do in Birmingham - not least our allotment. I am glad to be in either place - it's the departures that can hurt and the arrivals that can be so exciting - but I wish in a silly way that all were in the same yet different places instantly and almost simultaneously reached by opening magic doors, and yet at the same time we're glad of the differences made by distance. Down at Mark's and Sally's a new puppy, one of black dog Teal's offspring, is getting used to the place.