Liz and Matt were married in Shropshire at Rowton Castle on Tuesday, the exact anniversary as she'd promised her best friend Amy, of our daughter's marriage to Guy at Alvie Church last year.
The celebration nearly didn't happen with the original venue that Matt and Liz had chosen going into receivership a few months ago and so many places already committed to hosting weddings in May. Matt is relentlessly secular. "No hymns nor prayers for us." It was a civil ceremony overseen by the County Council Registrar of Marriages with discrete civil music and sober civil words; nonetheless solemn and none the less - they both said later - scary - making vows to stay together, man and wife, for the rest of their lives.

Amy with Liz's sister Catherine were bridesmaids, Amy wearing low heels to equalise her height. In the middle of the afternoon Liz threw her bouquet as had Amy the year before

Later at the wedding breakfast - and we had fasted and got up an appetite - Matt's brother quoted the words of Louis de Bernières in the mouth of John Hurt's Dr Yiannis of Ionian Cephalonia to his daughter Pelagia, Penélope Cruz in the film Captain Corelli's Mandolin, about what does or doesn't last after 'being in love':


When you fall in love, it is a temporary madness. It erupts like an earthquake, and then it subsides. And when it subsides, you have to make a decision. You have to work out whether your roots are become so entwined together that it is inconceivable that you should ever part. Because this is what love is. Love is not breathlessness, it is not excitement, it is not the desire to mate every second of the day. It is not lying awake at night imagining that he is kissing every part of your body. No... don't blush. I am telling you some truths. For that is just being in love; which any of us can convince ourselves we are. Love itself is what is left over, when being in love has burned away.

Our wedding present will be our son Richard's photographs of a day set in the most English of landscapes. 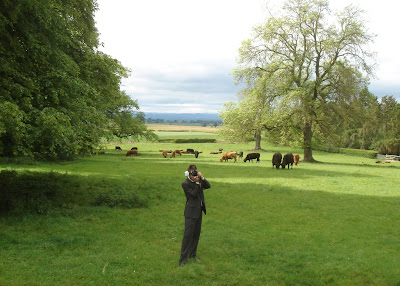 *** ***
I've been putting off going to our allotment, knowing how much work I have to do on it to get a crop going, but the latest newsletter - 17 May - which brings impressive news of the Committee's progress on the Victoria Jubilee - a shop supplied by Hirons Garden Centre, a sensory garden to which we can barrow unwanted stones from our plots, the purchase of a rotavator, strimmer, handmower, garden trolley and sack truck which can be used in return for voluntary help in the shop - reminded me, quite rightly, that uncultivated plots will be re-let. 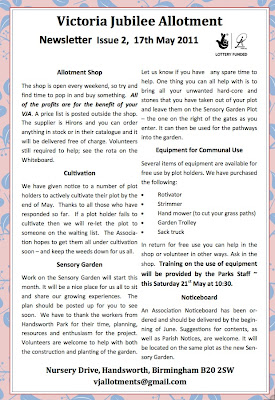 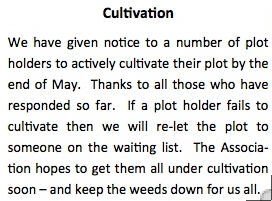 So this afternoon I cycled out to the allotments with a spade and fork and began digging over the rich collection of flowering weeds that have sprouted since we left for Greece in February. All around are plots that are looking impressively productive.  I see many are using raised beds made with planks of which there is a supply available on site along with a community compost heap, manure and bark ground cover. People have put up more sheds along with screens and polytunnels.
I am sure there will come a time when I have turned our 200 square metre plot into a working garden, but for the moment it remains a daunting mini-wilderness for which I can only reproach myself. My idea of growing food is still far separated from reality. I'm not a natural gardener. As I cycled onto the site, several people greeted me kindly; asked how I was. I replied that I was embarrassed, but at least I'm not among those on notice to cultivate their plot. Perhaps there's a residue of respect - though I do not seek or expect it - for the work I and others did over ten years by way of political campaigning to get these allotments saved from being built over. [A petition to sign asking the UK Government to withdraw its plans to repeal the duty of local authorities to provide allotments]

The soil feels unforgiving, stony and caked. There are heavy slabs waiting to be used as part of a foundation for a shed. I struggle with the fork, almost fighting the ground as I get started again preparing enough soil to plant a dozen potatoes and sow marrow seeds given us by our neighbour Vasiliki in Ano Korakiana


***
Richard, searching on eBay, bought and gave me a beautifully printed Greek New Testament published in 1813, the same year as Pride and Prejudice.

I'm having a discussion with friends on Facebook - Jon Hunt, Amanda Williams, Margaret Macklin, Alex Kapodistrias about differences between Modern Greek - Katharevousa and Demotic - New Testament Greek and Classical Greek. I guess it is about what various vessels hold these words, how different forms of Greek might be braided by a poet, might contain and protect their meaning and my reflections on them, on love - ἀγαπῶ. Serendipity brought me to Petros Gaitanos, Πέτρος Γαϊτάνος, speaking from Paul's letter to the Corinthians, making it a sublime hymn. Τι χαρά!
****
We had our second meeting this evening of the Central Handsworth Practical Care Project (CHPCP). Edmund reported that more or less all of the jobs that had to be done to ensure the legality of the project's vehicles had been done, and that income continued to come in to pay wages and on-going expenses, but the bank account was still tied up so he was having to work with cash, but keeping meticulous receipts and having clients pay cheques into the project's bank account where it was safe accountable but innaccessible. This ridiculous situation has come about because dear Glynis who died last year never worked through a committee with a transparent allocation of tasks 0 Treasurer, Secretary, Project manager and so on - and as mother Chairman didn't bother herself or anyone with little things like holding an AGM and otherwise observing the project's constitution. This means that we remain for the moment an interim board without formal standing because the members of the old committee despite invitations haven't turned up to agree to stay on or resign and approve a new working committee. We continue waiting on the bank to approve the new signatories for the bank account the previous signatories having proved difficult to find or reluctant through family committments to do the necessary hand over paperwork. There's an enormous amount of work to be done in the area, but Edmund and Kris are not getting paid properly and have had to use a small pool of petty cash to buy things like fencing, pay for petrol and mechanical repairs prior to the truck's MOT. Our meeting turned into an emergency meeting to ensure that by June 16 we would have a receipted hand-delivered a letter to every old committee member inviting them to attend or tell us their intention to discontinue their involvement with the project.
There was a sense of urgency, nervousness even, but our spirits are good. We'll prevail over the present difficulties because of our belief in the project and our enthusiasm about making it work, resolving the frustrations that have arisen from the previous committee's struggles to replace the leadership of Glynis who has died and the patronage of Mahmood Hussain, now deselected, no longer one of our local councillors. Πρέπει να είμαστε αξιόπιστοι.
** **
I got this message today 'If you don't like Nuclear Plants being built in earthquake zones in Turkey, you may want to sign this'


*** ***
The Technological Institute of the Ionian Islands (TEI Ionian) Τεχνολογικό Εκπαιδευτικό Ίδρυμα Ιονίων Νήσων, based in Cephalonia and Levkas, and providing among others things education in ecology, the environment and sustainable agriculture, has taken hard financial cuts. The chairman of the Steering Committee of TEI Ionian, Professor Napoleon Maravegias angered at the decision of the Minister of Education Anna Diamantopoulou to block further applications from students planning to study Business Administration, Technology Organic Agriculture and Food, and IT and Telecommunications, has resigned.

And in Ano Korakiana the few children left in the upper elementary school on Democracy Street will, for the next school year, join children in a larger school between Agios Markos and Pyrgi and the school in our village will be reopened as the new Corfu Special School staffed by about 10 teachers working with up to 40 pupils

This news made me think of the Skyros Horse Project on Corfu conceived by a friend of Sally's, Sylvia Dimitriades-Steen, based on an estate in Kanoni about 17 kilometres south of Ano Korakiana. She has been a leading figure in supporting special needs education in Greece. I find the idea of the Skyros Horse project, which I first heard of from Sally, and later from Richard Pine this March, especially pleasurable. On Sylvia D-S's website I read:


More tangibly, the Skyros small-horse - το αρχαίο Ελληνικό ιππάριον - small-horse valued today for the pleasure and inspiration it provides. Its mild character, stamina, intelligence, as well as other unique characteristics, such as friendliness towards people, adults or children, are legendary. This makes the horse ideal for interaction with children and the elderly as a form of therapy - and it is (a) mutual relationship. Besides breeding, the SILVA Project provides riding facilities for children with special needs and eldercare...plans are being completed for a new state-of-the-art Equestrian and Therapeutic Riding Centre. It will have Equine facilities as well as a Special Educational Needs and Disability Division for children, housing for Eldercare and exhibition space... 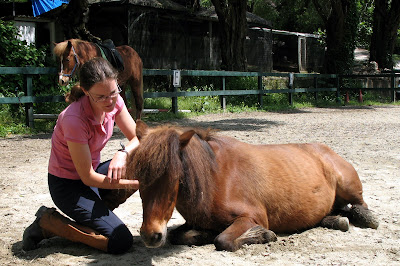 *Genesis 3.19: In the sweat of thy face shalt thou eat bread, till thou return unto the ground; for out of it wast thou taken: for dust thou art, and unto dust shalt thou return.
**** ****
This Saturday - 21 May - will see the celebration of the 147th anniversary of the union of the Ionian Islands with Greece - ENΩΣΙΣ 21 ΜΑΪΟΥ 1864; the graffiti in the photo on Corfu Blues <Το Πάθος για τη Λευτεριά είναι Δυνατότερο από Όλα τα Κελιά> 'The passion for freedom is stronger than any prison'. This, as is so often the case with history, was not as straightforwardly welcomed an event as folk history tells:


...there is another dimension to this story. Leftheris has told me, and it's confirmed by Thanassis and Katya as well as by Hilary Paipeti, that neither Ano Korakiana's band nor the band of Kinopiastes, the village south of Corfu town, were wont to join in annual celebrations of the anniversary of enosis with mother Greece on 21 May 1864... 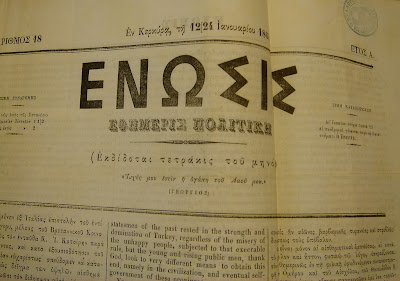