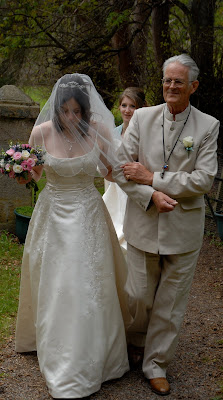 On a Monday in May our daughter Amy married Guy Hollier at Alvie Church in the Highlands, an errant sun, now and then, silvering the loch below the church. My mum Barbara was there, Sharon brown her carer, Linda of course and our friend Liz Delaney was bridesmaid. Guy's parents and just a few more friends. Guy's best man, his brother Russell. Keith, manager at The Station Pub in Sutton where, three years ago, Guy ordered a pint of lager and was served by Amy. Our son Richard was wedding photographer. I walked Amy to where Guy waited before the Minister, I gave her away. In that sweet place I had the sense of something momentous. (see Ano Korakiana website ~ messages from Katya, Kostas and Eva... Εύα και Κώστας) 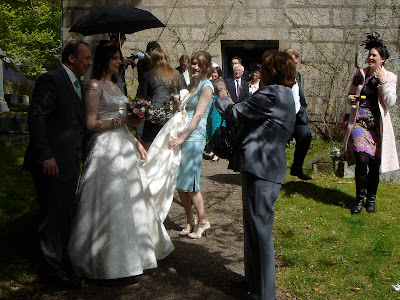 The ceremony was as simple as the church, the music played on a keyboard set up for the occasion. Amy and me walked in to Canon in D by Pachelbel. We were welcomed by Minister Ron Whyte, who announced a hymn - 'Praise my soul the King of Heaven' which even I can sing, then the marriage - the Minister asked for no photos at this point, which was right -

I, Guy, now take you, Amy, to be my wife. In the presence of God and before these witnesses I promise to be a loving, faithful and loyal husband to you, until God shall separate us by death

I, Amy, now take you, Guy, to be my husband. In the presence of God and before these witnesses I promise to be a loving, faithful and loyal wife to you, until God shall separate us by death

The blessing and a reading from Corinthians 13 - resonant:

Love is patient, love is kind. It does not envy, it does not boast, it is not proud. It is not rude, it is not self-seeking, it is not easily angered, it keeps no record of wrongs. Love does not delight in evil but rejoices with the truth. It always protects, always trusts, always hopes, always perseveres.

He agape oudepotte piptei, Love never she fails. eite de profeteiai, katargetezontai, be it prophecies, they will cease, eite glosai, pausontai, be it tongues, they will be stilled, eite gnossis katargetesetai be it knowledge it will cease. Nuni de menei, pistis, elpis, agape, ta tria tauta, So remain, faith, hope and love, these three, meidzoon de toutoon, he agape, but the greatest of these is love.

Second hymn - 'I vow to thee my country' - (Thaxted) - tricky phrasing - and the Benediction, the signing of the Registers - Ode to Joy - and, as Guy and Amy left the church, Mendelssohn's Wedding March. 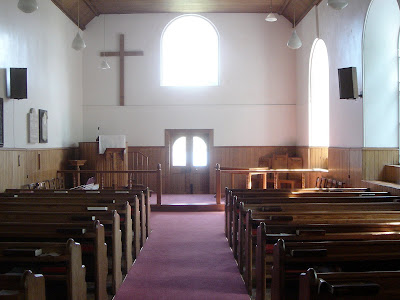 I respect, and delight in, the contrast between the austerity at Alvie and, earlier in the year, the venerable colourfulness of Saint Athanasios at the foot of Ano Korakiana. I've enjoyed every cliché in the ceremony book, including hymns that choke me up; at the same time, embarrassing me*. It was an arranged event, but one in which the old type of arranged marriage - by parents - was turned on its head. Instead of the bride and groom meeting for the first time on the day of their wedding, it was we parents who hardly knew one another until Monday. It was me crying rather than Lin, and it was Amy leading me up to the church rather than the other way round.
At the wedding breakfast in The Rowan Tree hotel where we'd stayed overnight, I made my speech - about strong women - starting with Jane Austen - she whose genius invented the subversive idea that people should get married for love - getting on to my family; my great grandmother Lucy who eloped with George Halkett, a penniless Scottish intellectual; my mother who divorced just after the war because she wasn't going to give up her career as a journalist to 'wear a hat' and be a diplomat's wife; about Linda who ignored caste barriers that would once have separated us (as did Elizabeth Bennett near two centuries earlier, unlike her brilliant inventor) and then about Amy, our daughter, who has a talent for making you not afraid of life, who, as a policewoman, will walk the mean streets - 'not a fragrant world, but...the world you live in.' 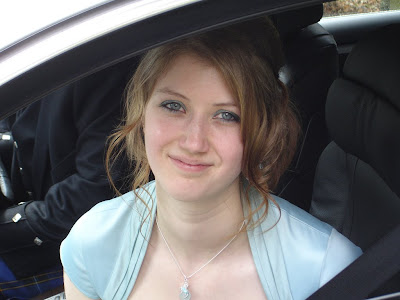 Pavla, who wishes Amy and Guy 'na sou zisei!' (may it live!) - has just published her second book on Corfu - [KORFU Pavla Smetanová ISBN 978-80-7422-025-8 160 stran/datum vydání 2010-05-12] - in Czech, so for the time being it's not available to me. She describes Corfu as experienced by a writer who's lived here over twelve years, married to a Corfiot, aiming to familiarise Czech speaking readers with everyday life on the island, its customs and traditions, describing Greek cuisine; where particular dishes can be found; best routes; places to visit; beaches and romantic corners of the island; historical facts and practical information.

** ** ** Amy observes the custom of throwing her bouquet in the air. The catcher is the one, according to tradition, who'll be married next, among Liz, Angharad, another Amy, Phoebe and Haley. * * * The brilliant Australian writer Christos Tsiolkas who I first encountered writing with poison ink of his Greek Australian roots in Loaded was giving a far more generous view of the immigrant experience and attitude in a BBC R4 interview with Mariella Frostrup in connection with his latest book - The Slap. Tom Shone's interview with the author from the Sunday Times 9 May 2010:

His parents, who are both still alive, emigrated to Australia right after the Greek civil war in the 1940s, finding work in factories, his father putting money aside so he could buy his son books for school — Great Expectations, Mills & Boon, whatever he managed to lay his hands on. Tsiolkas would sit in class, scribbling ideas for movie scripts he wanted to write, and determined on the career of writer when a teacher read something of his and pronounced it “filth”. It wasn’t until he went to university, however, where he met and fell in love with his room-mate, that he came out to his parents about his sexuality, moving out of their house shortly thereafter.

“It was really difficult for them, coming from where they did, to understand, first, my sexuality, and, second, what I wanted to do with my life,” he says. “But at no point did I ever feel unloved. No matter how difficult it was... I could come on as a working-class hero, but the reality is, yes, my parents were migrant factory workers. That’s where I came from. I’m really proud of what they’ve given me, not just materially, but in terms of their love, their support. I feel confident enough that everyone in my world understands my relationship and how important it is to me.”

*See Governmentality, from my 'conclusion' on the penultimate page; Thomas Mann, in Dr Faustus, on how music can surface the 'folkish layer':

...magical palliation for their fear of complexity...longing for neat wooden villages set in pasture land on the edge of pristine forests, the innocent domestic rituals of pastry-cooking and precise needlework. His novel depicts deep responsiveness to music, innerlichkeit, the Lutheran separation of state and church in an uneasy co-existence with helpless bourgeois humanism, and something else that creeps up on you beneath an artful patina of circumlocutory reticence, suggesting how a particular kind of civility created the space for its opposite - the surfacing of the folkish layer.

Reflective analysis of a genius, but - no - not specifically German, not even Nazi, but any of us. Some of the comments under some clips of I vow to thee my country on YouTube tap into the English scoundrels who've no wish to read its second verse; who'd fulfil the expectations of J.B.Priestley about who'd strut if fascism got a grip.
Posted by sibadd