Work on the plot 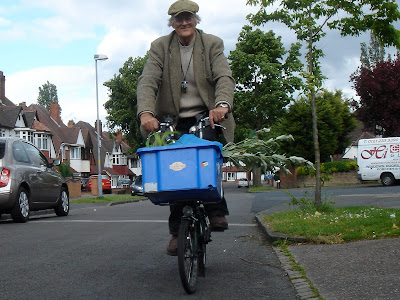 I usually enjoy working, but getting a grip on our allotment is almost drudgery. It feels like I'm back to square one clearing the ground, even two steps back for one forward. The clearing of fat-hen last year has allowed the growth of more tenaciously rooted grasses, dock and nettles. I struggle to fork out mop bottomed chunks of crab grass, 'weeds' which would grace a pasture, amid fist sized stones, old building debris, even glass and plastic remnants. I was thinking how nice it would be to have someones donkey over to graze. That would at least clear the tops of the weed and remove the seeds released to blow over the rest of the ground of so much unwanted greenery.
All around, other's allotments are burgeoning, organised and fruitful. A cause for rejoicing. There's also a growing waiting list for plots on the VJA.  I'll not give up. The rewards of sitting in my shed with a cup of tea and surveying a crop of healthy plants is too fine a goal. I imagine it as I toil at enlarging a growing patch of forked soil, in which I've planted more potatoes, some corn and decorative border plants.  It's a tiny incursion into the wilderness of Plot 14. 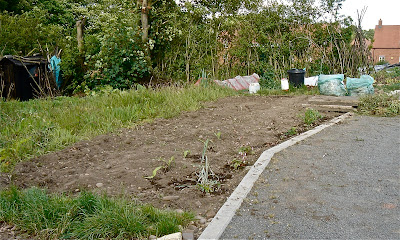 'Plot' is apposite. Scanning different plots across the VJA site as I cycle in and out - a five minute ride from our house - I see many looking neat, fertile and organised. People have been putting in raised beds, dividing their allotment into manageable sections. Some have laid wood-chip on the spaces in between.One has even got neatly turfed criss crossing paths. There are polly tunnels, screens, compost boxes, and a plethora of diverse sheds and everywhere crops in rows and circles - potatoes, tomatoes, strawberries, lettuce, carrots, cabbage, peppers, herb, cardamon and much much more. One gardener has fixed a model owl and a kestrel on edges of their plot to deter pigeons. There are heaps of manure, chips, planks on site available from the allotment shop open in the morning. So each plot demonstrates the craft and the character of its gardeners - there's usually more than one person working any one allotment; sometimes whole families.
"So what does our plot say about us?" said Lin.
"That we are absentee gardeners, who haven't grasped what running an allotment involves."
"And we've got so many other jobs to do in the next three months."
We have. Redecorate one of our flats so we can earn rent again from it; continue helping the management of the Central Handsworth Practical Care Project (CHPCP), go on with our Greek lessons, wash dog Oscar who has got fleas, help out with organising the centenary celebrations for Black Patch Park, visit my mother in the Highlands in a few days if Iceland's latest volcanic cloud does not ground me...


"Grimsvötn is a much more powerful eruption than Eyjafjallajökull, but for a combination of reasons any disruption to UK flights is likely to be considerably less," said Dr Dave McGarvie, a volcanologist at the Open University (Scotsman 24 May'11)

...get repairs done on Rock Cottage in Lydbrook, lead a couple of seminars on political space and on scrutiny. I'm also pursuing the project with fellow members of the JH Committee to find and restore old Out of Town and Old Country programmmes....
*** ***
Lin tidied up my draft of the Minutes of the CHPCP meeting on 19 May. One item aims to capture the absurdity of the current situation, in which the old committee seems to have vanished but a new one cannot be legitimated without approval of the old - a normal rule in many committee or board constitutions. The only way out of this situation will be if members of any new committee can show they have exhausted due process in trying to convene the old. For the moment we shall continue as volunteers.
*** ***
Richard in his roaming of the web for old books has found me a little gem - volume 2 of the two volume A Sentimental Journey Through Greece. in a Series of Letters, Written from Constantinople; By M. de Guys ... to M. Bourlat de Montredon, at Paris. Translated from the French. 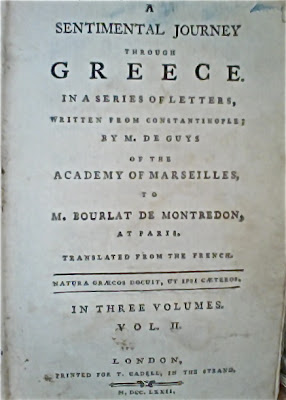 Just a swift glance through the little book shows a writer entirely aware of the chronological distance between himself - writing in the 1770s - and the classical Greeks, and entirely confident he is travelling in their country refreshed and excited by the same springs that fed the great western river. De Guys was a physican of Lyons, a member of the Academy of Sciences and Belles-Lettres of Marseille, a folklorist interested in the Orient. De Guys spent more than 30 years in the Levant engaged in commerce, after being sent in 1739 to the business house of his uncles in Constantinople. His travels convinced him modern Greeks were direct descendants of the ancients. The book compares ancient and modern Greeks on many subjects including marriage, fishing, navigation, dress, horse harness and education - some of which  - corporal punishment - he deplores. His book was very popular book contributing to philhellenic sentiments in France