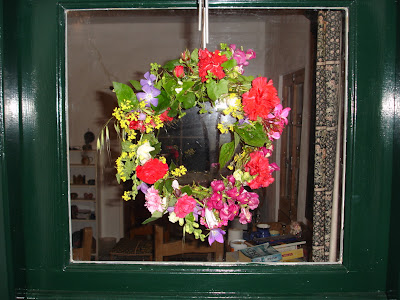 I strolled through the village on Sunday evening collecting wildflowers for our first May wreath - adding some carnations from last Friday's epitaphio. I made it myself with a little help from Lin.
*** ***
I've circulated this to current members of the informal 'Jack Hargreaves Committee' - a sort of modern Pickwick club of talents I believe my stepfather would approve - myself, with no pretensions to be Samuel Pickwick, Tony Herbert, John Peters, Ian Wegg, Mark Jacks, Mark Taylor, Ray Langstone, Jennie Constable, and Phil Wade:
Summarising where we – the JH Committee – are, in our happy project aimed at sorting out the main part of my stepfather’s different films about life in the British countryside. We are, barring lucky discoveries, leaving out for the time being, Country Boy, which I’ve never seen, and Gone Fishing, the black and white Southern Television Series with which Jack began his TV career, and focusing on Out of Town, which ran for half an hour on Friday afternoons, for twenty one years – appearing almost exclusively in the Southern Television area and never networked, though episodes have been reshown in other parts of the UK. Out of Town on Southern Television was mostly directed by George Egan.
When Southern Television lost its franchise Jack started working with an independent company called Lacewing to create, at Meonstoke in Hampshire, three more years of a new series called Old Country, of which sixty episodes were made and broadcast nationally by Channel 4, directed by Steve Wade. The studio insets and location films for Old Country were all made by the Lacewing team. During this series Jack would occasionally revisit places which - and people who - had featured in the Southern Television series of Out of Town, making it easy to mistake new Lacewing location film by Steve Wagstaff for the original Out of Town location films by Stan Bréhaut.

Sad to say the mastertapes for none of these programmes have yet been located, if they even still exist, or were even made at all, as in earlier times it was not normal to make or keep a video record of many broadcasts, though the original film used in them may survive at South West Film and Television Archive (SWFTA) where they were deposited by Jack’s friend Nick Wright – to whom Jack’s wife, Isobel, entrusted JH’s film and tapes after his death – including material that Jack had bought from Southern Television after it lost its franchise.
As well as these programmes Out of Town (Southern) and Old Country (Channel 4) Jack worked with the same team that had made the Old Country series, to make a series of commercial videos – for private sale and not primarily for broadcasting, these were retailed by a company called Primetime as Out of Town and comprised nine VHS videos, later DVDs, containing twenty seven episodes of Out of Town. This series, currently the only examples of complete episodes of commercial quality, was made in Jack’s shed beside his home in Dorset. In previous series the ‘shed’ from which he introduced location films had been, both at Southern and Meonstoke, a mocked up studio shed. The location films in the commercial series were drawn from an archive of old 16mm film that had been used in the Southern Television series all shot by Jack’s long term cameraman Stan Bréhaut.
After Jack’s death in 1994 – around 1995 and 1998 Meridian Television broadcast some episodes from the Primetime VHS/DVDs.
I propose we use the following short definitions when discussing the material.

OoT for Southern original
OC for Channel 4
VID for the video/DVD release.

A useful key clue as to the origin of any of these episodes is the ‘shed’. There is bound to be other material which we either know already, like the last Out of Town on Meridian when Fred Dinenage got Jack, in ‘retirement’, to do one more episode from his shed, or film that may come to light, so let’s treat this as a working summary to use as a guide, always subject to editing as we learn what’s what. 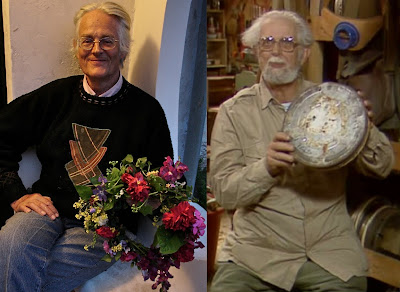 “Dr Joad said that man would one day greatly regret the invention of the internal combustion engine. It’s my view that one thing we ought to be very grateful indeed for is the invention of the camera. Cheerio.” JH speaking in his shed at Raven Cottage in1986 about the films he’d made with Stan Bréhaut over 21 years of Out of Town. On a Mayday twenty five years later I'm sat in our porch in Ano Korakiana.

A sample of JH films streamed on YouTube and Vimeo:
Posted by sibadd