A skull in the well

Having made a general slander against the signorini as a universally oppressive class I had to go back to the best living expert – to my knowledge – on the social history of the Ionian polity, Dr Eleni Calligas who’s 1994 Phd. Is called The ‘Rizospastai’ (Radical-Unionists): Politics and nationalism in the British Protectorate of the lonian Islands,1815-1864. More than any other scholar I know, she draws on the widest range of primary sources from this period in Greece, Britain and, of course, the Ionian islands - sources in Greek, English and Italian. Her English prose is immaculate, her scholarship impeccable. 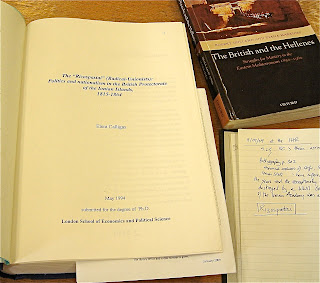 No-one wanting to study the modern politics of Corfu, or any of the other Ionian islands, can claim to be properly informed without either digesting her sources or ensuring themselves a thorough study of her thesis, which, wonderfully, is now available free on-line from the British Library as a PDF file, allowing detailed searches of Calligas' text. It may be necessary to join the Library to access this and get a reader number, but that's a process with which I once struggled, so great was the demand for on-line access, but which can now be carried out fairly easily on-line. (see also: 'Constructing Ionian Identities: The Ionian Islands in British Official Discourses; 1815-1864', Maria Paschalidi, University College:London 2009)
I had an email a week ago from Ann Arbor, from someone researching his Ionian ancestry; in particular his connection with Dimitrios Nikolaou Karousos, a signorini from Cephalonia, who received the office of the last Lord High Commissioner, Sir Henry Storks at the end of the British Ionian Protectorate on 21 May 1864.  Along with other information about sources he might like to pursue, I’d recommended Dr Calligas:


Dear Simon. Thank you for all the great information. I will contact Dr. Eleni Calligas after Easter. I just downloaded her thesis using a link on your blog.  I will send you an update when I discover my connection to the aristocrats or the radicals. Regardless of the outcome, I am enjoying learning about the history of the Ionian Islands.  I hope you and your family have a wonderful Easter. Thank you, Brent

My derogation of the signorini as a class, doesn’t stand up. There are too few pixels in my sketch of a bunch of exploitative villains. Calligas' scholarly winnowing records how it was via certain members of the signorini, not only younger family members infected by European radicalism following studies in Italy and beyond, that dangerous ideas of liberty, justice and union with Greece diffused to the island peasantry, many of whom joined a range of secret clubs set up by educated radicals. They organized subversive public ceremonies shrewdly mingled with traditional celebrations, making them frustratingly difficult for the ruling authorities – British and their supporters -  to control or suppress. So the songs, poems and tracts of radical-unionism spread through the islands, vexing the government. Calligas documents the who, when and where of this and other rebellious activity over the first half of the 19th century in fascinating and, I suspect, unprecedented detail.
Nonetheless stories of signorini despotism pass through generations. As well as her story of the Robin pie, our friend Lula told us over supper last year that her father had taken her, as a girl, to visit the remains of an old Venetian estate. He showed her a large dry well.
“I could see something round down there. I kept looking, trying to make it out”
“A skull” her father said
“Then I could see there were other bones down there” She told us how it had been a valued right of signorini to give asylum to people on the run from the authorities or a family feud. A man would come to the lord to seek his help. The signori would invite him to sit in a big chair opposite him and explain his situation. Then, to the petitioner’s gratitude, he would assure him of protection in return for a fee. Once obtained, perhaps a large proportion of a man’s possessions collected by himself and family, he would hand this to the signori. Hands would be shaken across the table, and at the touch of a lever, the man’s chair would tip, dropping him in the well. Family members asking after him would be reassured by the signori that their relative had been given support to cross the narrow sea to live in secure obscurity on the mainland. They would be warned of the risks of trying to communicate with them. When after a long time he had still not returned nor sent any news, it could be explained that he must have encountered a fatal mishap while in exile.
*** *** ***
There are few windows in Corfu without shutters  παραθυρόφυλλο – to protect window frames against the weather and provide security – and match the style of other houses. Furthermore so many of these are louvered, with so familiar an arrangement of small angled slats,that one could be excused for assuming that these are the norm for all shutters. Most new or renovated buildings have their louvered shutters made of metal, constructed to order, often to match standard metal window frames also made in factories outside Corfu, the familiar green - though sometimes white or brown or even blue - applied by hot dip at the time of manufacture. Some modern shutters are now moulded with LDF (low density fibre), colour in the original mix, making wood look even more out of date. Such external furnishings can sometimes be detected by a uniformity that exceeds the regularity of skilled joinery, though unless touched they are, certainly, at a distance indistinguishable from wooden shutters.
Even wooden shutters have become more uniform with the advent of powered routers and larger scale manufacture, easing the complicated challenge of making and inserting the louver (or louvre) slats. They’re normally in pairs. One set of wood shutters on our house – four hinged and folding louvered doors folding back on either side of the window, contains 120 slats in eight apertures. Imagine making, finishing and painting these, let alone stripping them to repair and renew them, and you understand why people opt for modern metal shutters, made and delivered to order. They are very strong, look nice and endure with minimal maintenance. We, being inclined to wood, were still not looking forward to renovating our wooden shutters. Our remaining  wooden framed windows have shutters that are flaking, and faded with bleached shrinking, even decaying, wood.
Other windows have been replaced by the previous owners with metal double-glazed ones, so robust they survive the heat of the summer and the wind and rain of winter without needing shutters. We found the shutters for their wooden predecessors stored, in sorry state, in the apothiki.
Despite the logic of modernity we’d prefer to stay with wood, a preference strengthened before Easter by watching Lefteris, next door, mending his louvered shutters and replacing others with ones that had none. He made them from tongue-and-groove deal in front of his house, removing the strap hinges, right-angled to avoid the louvers on their predecessors, and transferring the door length horizontal bolts from his old ones.
He told us that these were traditional Corfu shutters. They are simply double doors over the windows, like some shutters we’ve seen on old English houses.
“Those” he said, pointing to louvered shutters over the road “are Italian "and these” - pointing to shutters which had a vertical wooden bar attached to all the slats, allowing them, to be swivelled - στρεπτή - from inside the house to adjust the amount of light allowed in - “are Venetian.”

Wandering along Democracy Street I began noticing the different types, having missed such detail before. Of course grand houses on the Liston and across town, though not on some churches, have the Italian and and Venetian type...“But not in the village” said Lefteri. Yes! he said it in Greek and I understood.
I saw from looking at pictures of some of the Noble houses in the countryside or villages from the book Cinty’s lent us, how attractive were some of these unlouvered shutters. 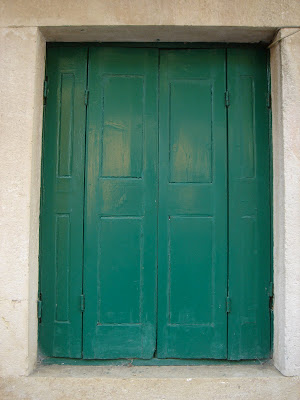 Corfu shutters on Democracy Street, Ano Korakiana
As we laboured stripping a set of our ‘Italian’ shutters, Lin said, “Why not have the other kind? The Corfu ones. They can hang on hinges in the wall outside the window, and need no frame."
“I do like the inset ones” I said. We contemplated the time we’d spent making the inset shutters on the little window downstairs

cut a neatly angled groove along the edge of each section – 16 per set of shutters for one window -  fit them firmly in place on each side of the shutter with glue and small nails, prime, undercoat, paint and rehang."

enough insets to turn three sets of Italian shutters into Corfiot ones.” said Lin setting to at dusk 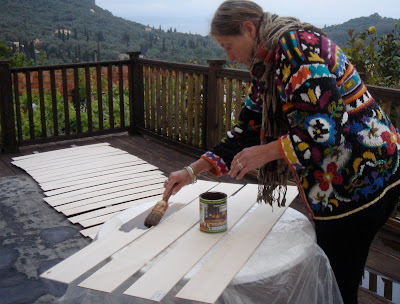 ** ** **
To supper this evening at Vitamins at Nisaki with Aleko Damaskinos to check with him some of this material, on shutters and signorini.
Posted by sibadd