Christmas in a village

In Rama was there a voice heard, lamentation, and weeping, and great mourning, Rachel weeping for her children, and would not be comforted, because they are not. Matthew 2:18

The picture's owned by the Queen. An earlier owner - Rudolf II -  found certain details so unacceptable he had them altered, so it looked as if the soldiers were poking over sacks of plundered goods instead of swaddled babies. Little faces were painted over, replaced by snow, sacks, poultry, animals and cheese. Massacre of the Innocents was renamed Sack of a Village. Even now, if you didn't know the painting's proper title, it seems like a lively village scene, sibling to that favourite Hunters in the Snow. Isn't the daily life of villagers a theme of the elder Breughel's? But something's happening, and even after the original was restored some of the worst things remain left to the imagination, in this masterpiece of evil's detailed banality (Ruben's treatment is quite the opposite).

O sisters too, how may we do,
For to preserve this day
This poor youngling for whom we do sing
Bye, bye, lully, lullay.

Herod, the king, in his raging,
Charged he hath this day
His men of might, in his own sight,
All children young to slay.

That woe is me, poor Child for Thee!
And ever mourn and sigh,
For thy parting neither say nor sing,
Bye, bye, lully, lullay.

This genius of the extraordinary in the ordinary painted The Fall of Icarus in which the tragic hero's leg sticks, almost comically, from a sea shading from mazarine to spinach green, as the world gets on with its business. 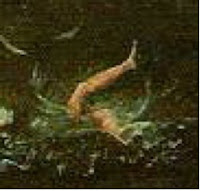 Knowing the picture would stand as a fine landscape, I could imagine a powerful patron, for different reasons, but with similar duplicity, ordering redaction of the leg;  re-naming the picture The Golden Age or some such,  treating a momentous accident as a blemish.
** ** **
Dave and Trish and family on Corfu have arranged by phone and email to have their Christmas lunch at our house on Democracy Street. Trish shared the news that G. in Ipsos is very ill and has returned to hospital in England; that CJ's Bar is closing and re-opening as Sally's, and that between them they've pumped out rainwater that rose above Summer Song's cabin sole (an idea of how it rains in Corfu). Here I've put up and decorated the Christmas tree, hung mistletoe over the porch; a wreath on our front door.
We will be nine for Christmas lunch this Saturday - Lin and I, her parents Dot and Arthur, Richard our son, Amy our daughter and Guy our son-in-law, and our friends Liz and Matt....and news of a Christmas celebration - η χριστουγεννιάτικη γιορτή - for parents and children from the primary school and the kindergarten - του Δημοτικού Σχολείου και του Νηπιαγωγείου - in the Agricultural Co-operative building in Ano Korakiana.

** ** **
A great gift that came to me from the ill-judged invasion of Iraq has been my friendship with Dhiaa (see: in the Forest of Dean with my Japanese students), who having come here as a refugee with the help of CARA, has been studying matters that have become increasingly fascinating  - the post-invasion politics of his country and, looking further back to the political thought and practice of Mohammed Baquir al-Sadr executed by Saddam in 1980, founder of the Dawa Party, and the Sadrists, who are now, conditionally willing to participate in government though regarding US presence in their country as an 'occupation'.
Dhiaa's theme is Shiísm, Politics and Development in post Saddam Iraq, the impact of Sadr’s socio­political ideas on the formation, roles and development of governance.

A few days ago Dhiaa told me in confidence - now unnecessary - that he'd accepted an invitation to become a minister of state without portfolio in the new Cabinet (see also) of his country. We met for coffee in town to say our farewells. He was leaving for Baghdad to meet the Prime Minister and take the oath of office. I imagine him hearing the sounds of helicopters heading to and from the green zone, the sound of electricity generators, small arms in the night and the company of his security. We talked between phone calls from Iraq, congratulating him. I pondered the possibility that one day I may be able to visit Iraq and see its beautiful ancient places - so devastated by war. Dhiaa, a devout Muslim, has given me - faithless - insight into the beauty of my birth religion, helping explain the mystery of the Trinity, the bizarre differences over the filioque clause in the Latin Creed and the contrast between knowing via scientific enquiry and faith that comes through revelation.  We've been amused by that; recognising how scientific breakthroughs are - in the biographies of their progenitors - experienced as revelations - εὕρηκα -  and so much that has been arrived at through science is a matter of faith. How many can actually argue the case for heliocentrism verus geocentrism, evolution versus special creation, or anthropogenic climate change? I gave Dhiaa my copy of The Bridge over the Drina. "Ivo Andrić did a Phd. on The development of spiritual life in Bosnia under the influence of Turkish rule before he wrote his greatest novel. Perhaps one day you can write a book based on your experiences here and in Iraq with the material in your thesis providing background and understanding." 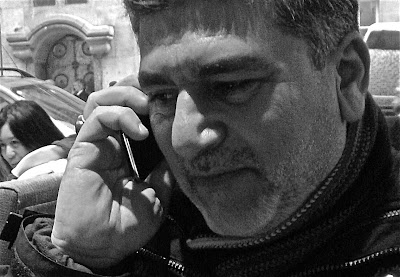 Στο καφενείο του χωριού, παρά το τέλος του χαρτοπαίγνιου, η κουβέντα δε λέει να σταματήσει, αφού οι αφηγήσεις των παλαιοτέρων γυρνούν πολλές δεκαετίες πίσω, ξεσκονίζοντας παλιές ιστορίες του χωριού… «Καλά Χριστούγεννα» θα είναι η τελευταία τους φράση πριν την αναχώρηση για τα σπίτια…
** **
In Birmingham's Corporation Street I saw a member of the Police Firearms Unit getting Christmas presents. I was reminded that we are at war, albeit some version of what's called assymetric, while there are others having a go at each other with guns and knives amid the shopping. 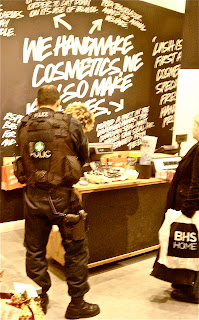 This image posted on Flickr began a discussion on the police that moved from observations on firearm technology to the matter of their bearing arms: