This is the Fall of Icarus by Pieter Breughel the Elder, sometimes called Peasant Breughel. W H Auden wrote a poem about this picture. I glimpsed the white legs, the last sight of the boy, as he fell in the sea from flying too close to the sun, while ordinary life went on, and would have hoped to have raised an alarm and run to help, as would almost anyone. That wasn't the artist's point which is that events very seldom happen in our frame.
I saw a mugging one afternoon in Haringey. Until it was over I thought I was watching a couple - a young black man and an older white woman - dancing in the street. Afterwards - sure - a group of us sat with the women robbed of her handbag, lost and sad, until the police arrived, but I could remember nothing distinct enough to identify her attacker in a line up, nor could she.
Here on the ramp at New Street in Birmingham, I wasn't looking at what I'd photographed until I looked again by which time our unlikely local Icarus was gone. 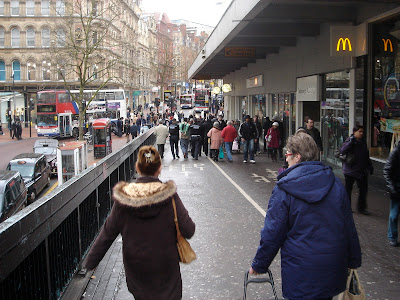 Nor did I grasp what I was filming - in silence - when this child ran down a snowy bank eager as a penguin to enter the frozen water of the pond in our local park one Christmas Day in Handsworth. Why does the young woman in the long coat - initially hurrying towards the rescued toddler - abruptly pause before advancing quite leisurely towards him (or her)? Why does the rescuer walk away so swiftly, presumably to recover his camera. If the child's his would that matter? I puzzle over these small and almost casual interactions.

Lin and I went round to an address in Rushall. Joseph with child and wife turned up as we waited, smoking, the freecycle shed taken apart leaning in the alley beside the house. There was no room in the van for two parts. Lin said 'Saw them smaller. Mend later." My old tenon saw, one of the tools we'd brought along, had just been sharpened. The pieces fitted in and after leaving the freecyclers a big bar of chocolate we headed eight miles back to Birmingham against the rush hour, unlocked the gates of the Victoria Jubilee Allotments and unloaded the shed on Plot 14, carrying pieces across the rough ground weedy ground watched by a handsome black and white cat - the whole job costing £50, with probably another £50 to re-roof and glaze. = Our potatoes are looking poorly, hit by early frost, doomed by their late planting.

I aim to get the shed foundations completed when we return from Australia and even have the shed mended and standing before Christmas. I notice it has a small hole for a cat flap.
For moving stuff we'd gladly recommend Joseph [Man and Van Birmingham, B43 5ED  0870 486 3755  mobile 07900 230927‎]
*** ** ***
Another Greek lesson with Niko last night - our first since getting home. We focussed on the verb 'I am' - είμαι....
εγω είμαι,
εσύ είσαι,
αυτός/αυτή/αυτό (he/she/it) είναι,
εμείς είμαστε,
εσείς είστε,
αυτόι/αυτές/αυτά (female, male, neutral) είναι.
I realise a lot of the time pronouns are contained in the verb ending, but...
We also did possessive pronouns: μου = our, σου = yours, του/της/τους = his/hers/its, μας = ours, σας = yours, τους = theirs
...and telling the time, in numbers unless its a quarter or a half, then...Η παρά η και τέταρτο = quarter to or quarter past and η και μισή for half past.
Posted by sibadd