Political-management trailer from Simon Baddeley on Vimeo
Working late at my hotel in Wellington I extracted from my archive of conversations between elected politicians and managers about twenty clips and edited them into a six minute medley - mostly mine from England, but two by John Martin made in Australia and one from the Channel 4 documentary Town Hall based on Lewisham.   The earliest of these extracts was filmed in the early 1980s, the most recent, a few months ago.  I may use these to kick-off the seminar here tomorrow, and perhaps also on the second one day event I'm invited to run in Rangitikei District Council on Wednesday.
[More films with transcripts are here and here along with handouts and papers here. Note: Some Council servers will not allow use of YouTube, Vimeo, or Google.docs on which this material is streamed.]
Andrew Coulson, whose idea it was, has just circulated a joint paper called New Options for Political Management in Local Government, to which I and colleagues have contributed - in my case on pages that focus on political and managerial overlap. 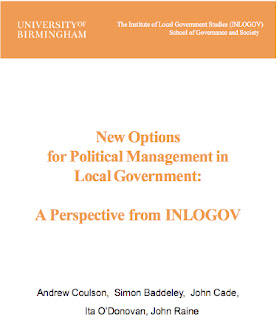 Our paper will be posted any moment on the Inlogov website, but until then I can email it as an attached file on request or enable access via my own file for it on Google.docs. In his introduction our director John Raine writes:


Following the general election in May 2010, the context in which local government must operate has changed markedly. The localist agenda is becoming firmly established and although the economic climate and financial stringency is presenting huge challenges for councils across the country, it is clear that local authorities will be able to enjoy new freedoms to choose how they organise themselves and how they respond. It is accountability at local level that now matters most. Local government performance will be judged on the basis of its success in engaging with local communities, in building public confidence and trust, in responding to and addressing local priorities, and in capacity-building for the Big Society....The new climate of freedom includes the option of returning to the old committee system and so, once again, engaging (all) councillors more fully in both policy making and oversight in relation to key service delivery functions. But this is only one possible reform. As our publication emphasises, there are other ways through which councils can become more open and inclusive, and more in touch with the issues of most importance to local communities, so strengthening locally accountability. Accordingly, this paper explores the strengths and weaknesses of different models of the committee system; it examines the range of possible options for political management now open to councils, and it considers how to ensure strong accountability for executive decision-making in local government. In so doing, it reflects on the varied experience of ‘overview and scrutiny’ over the past decade and draws out some key lessons to be considered carefully as local government looks forward and seeks to do its best in the much changed political and economic climate....

While writing my contribution to an earlier draft - p.13-15 - a comment by John Stewart pointed out that I'd substituted 'Maud' for 'Northcote' when referring to a pivotal contribution to the machinery of British Democracy, a House of Commons report written in November 1853 that led to the introduction of competitive exams for membership of the Civil Service, which was the basis for replacing a system of appointments based on the favour and influence of the aristocracy with one relying on a permanent body of competent politically neutral administrators - a principle extended to Britain's emerging local government. Here's a sample paragraph from page two of that succinct House of Commons Report on the Organisation of the Permanent Civil Service by Stafford H. Northcote and C.E Trevelyan: 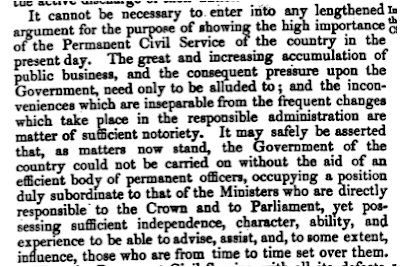 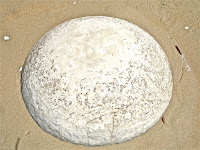 A day before I flew to North Island to run seminars there, Val drove Lin and me 70 kilometres up the coast from Dunedin to see the famous Moeraki Boulders - perfectly rounded, until weathered by the sea, formed in ancient mud like pearls round harder objects, and fifty million years later (give a few million more or less) exposed by sea and wind to tumble into the Pacific surf, so that for a geological instant, humans can gaze, touch, paint, film and tell stories about them.

The Maori legend, more electrifying than the scientific explanation, and the one I'd tell my children until I could make the geological account as exciting, says these boulders are the petrified cargo of a mighty double hulled canoe - a ndrua sailing from Polynesia, crewed by the chiefs Kirikirikatata, Aroarokaehe, Mangaatua, Aoraki, Kakeroa, Te Horokoatu, Ritua, Ngamautaurua, Pokohiwitahi, Puketapu, Te Marotiriaterehu, Hikuroroa, Pahatea, Te Waioteao, and Hapekituaraki. which, driven before a north east gale, was lifted by tempestuous seas and smashed against the Koekohe shore of Aoteroa spilling its freight of eel baskets, calabashes and sweet potatoes. Here they lie. And I've just realised the origin of the term Polynesia - πολλά νησιά - many islands. So it must have been magnificent Odysseus blown even further off course than I'd realised who came to the mighty Pacific and these stones are the ancestors of those pomegranates that grow in Ano Korakiana.

On the way south again we stopped for coffee and cake in Palmerston. In a second-hand shop in this small village I found a book called Captive Kiwi by R H Thompson. Made prisoner-of-war at honoured Sphakia (Σφακιά) after the loss of Crete to the Germans in June 1941 Thompson, a warrant officer, was taken to a prison camp at Thessaloniki , made two escape attempts and writes about his movements in the bitter winter of northern Greece trying to get back to allied forces in Egypt, following the Struma, passing through the countryside and villages of north eastern Greece, writing of the courage and kindness of those who gave him succour at the risk of their loves and, worse, of their families' and other villagers'.