It still amazes me... 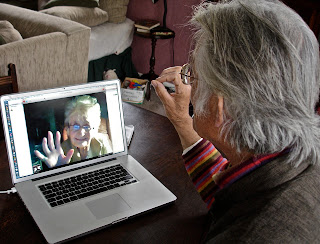 ...that I can press a button on my laptop, then another, and I'm chatting to my mother in the Scottish Highlands from Halfway Bush, a Dunedin suburb in New Zealand. We're a good 12000 miles apart, and our call is free and on top of that we can see each other, so the stuff that goes under the heading non-verbal communication is available on the phone - in this case Skype - and given that we've only had language for a - speculative - one twenty-fifth of our time as a species, it seems to me a good recovery of the right bandwidth for communicating over distance. True we've been using Skype in our household about four years, but I still keep a sense of wonder that the TV-watch and other devices I saw at school in Eagle and other cherished comics in the 1950s is real.
** **  **
The seminars, in Wellington on Negotiating the Overlap, and the next day in Marton on Managing with Political Awareness, seem to have gone pretty well. I was apprehensive back in UK whether even one of these would attract participants, delighted to have thirty four turn up for the Wellington event organised by Conrad Flinkenberg, manager of the SOLGM Opus Business School and his colleague Carolyn Lampp, event co-ordinator, and then the day after, at the invitation of Clare Hadley, CEO of Rangitikei District Council and this year's elected President of SOLGM, to run an in-house event for officers of her council with guests from Horizons Regional Council and Manawatu District Council.
** ** **
Richard Pine's latest piece 'Ireland is not Greece - so what is it that makes both countries so similar?' in The Irish Times makes astringent comments on the 'Celtic Tiger' and the 'Hellenic Hound', listing three things significant about  recent local and regional elections:


"GREECE IS not Ireland," the Greek finance minister Giorgios Papaconstantinou declared last week. What he meant exactly is uncertain, although it is assumed he was referring to the Irish banking crisis, which is not replicated in Greece. In other words, Ireland's financial woes cannot be compared to Greece's, and vice versa. Conversely, Irish Government Ministers have been saying over the past week that "Ireland is not Greece". In fact, the two countries could not be more similar. If there ever was such a creature as the Celtic Tiger, it had a cousin, the Hellenic Hound, trotting after it and emulating it. Overspend, overindulge, exaggerate, be overconfident. Each on the rim of a fragile Europe and an even more fragile euro zone, each proud of its independence from the age-old dominant neighbour, and proud of its historic contribution to European culture....

....The elections, widely regarded as a 'referendum' on PASOK's first year in power and its decision to agree to the EU/IMF bailout, were significant in three ways. Firstly, they confirmed polls in August and September showing that 60-70% of voters had no faith in either PASOK or the opposition to solve the crisis: as a result 40% of voters stayed away from the first round of the polls, and 55% in the second round - this in a country where, technically, voting is compulsory and where an 80% turnout is regular. Both PASOK and opposition New Democracy (ND) lost support, and only the communist KKE increased its national vote.

PASOK won eight of the 13 new regional governorships, and the two biggest mayoralties, Athens and Thessaloniki, both long-term ND strongholds. And in many cases, elections were won on the slimmest of margins: by 50.1% to 49.9%.

Secondly, the creation of larger local administrations has changed the political landscape: there is still much confusion as to how what appears to be administrative centralisation is going to facilitate the government's policy of 'more power to the people'. More functions are being assigned to new regional governors - i.e. infrastructure, tourism and the environment - but how they will exercise them has to be seen.

The third consequence of the political instability over the past year is that, with widespread dissatisfaction with PASOK and ND (the first for its management of the crisis, the second for having caused it), political parties have fragmented, with new formations on left and right. Former foreign minister and loser in the ND leadership challenge Dora Bakoyannis is to launch her own party soon, adding to the confusion, amid which a coalition government after the next general election becomes increasingly likely. What is certain is that Greek society - its economy, structure and culture - is changing fundamentally. No one, not even prime minister George Papandreou, with his reputation for lateral thinking, can predict how this will be achieved.

Traditionalists see it as the end of whatever makes Greece what it is. Modernists see new work practices, social structures and forms of communication as vital if Greece is to become a viable and trusted member of the EU.

*** ***
It may be a horrible coincidental spike in numbers but I seem to have been reading about a disproportionate number of road incidents involving the death of cyclists in New Zealand. Recent research suggests driver attitudes deter people who might otherwise take-up cycling or do more of it, and I suspect there are deeper problems for any cyclist wanting to share the roads of Aotearoa with motorised traffic - though the recreational trail riding looks wonderful. After reading a series of victim blaming comments of the kind which now appear a lot less frequently in the UK media, I added a comment to a local newspaper article about the recent deaths:


There's a lack of equivalency in the current debate. In most bicycle-motor vehicle collision fatalities the one who dies or is critically injured is the cyclist. Death is far too high a price to pay even on those occasions where the fault is the cyclist's. Co-existence on the roads requires attitudes and, in some cases, laws that recognise the difference between an average weight of 1500 compared to one of about 15 kilos, and very frequently an equivalent difference in momentum between cars and bicycles. Government needs to impart such facts as that we all pay for our roads through our taxes, and that the statistics for fatalities and injuries caused by cyclists to both drivers and pedestrians is so small as to be negligible, and truly disproportionate if compared to the numbers of drivers, passengers, cyclists and pedestrians killed and injured by motorised traffic. As a visiting Englishman I envy New Zealand's respect for the law, its sublime landscapes, the friendliness and generosity of its people, its global primacy in eradicating corruption in government, its reputation for quality of life and equality of opportunity and its care for the environment. I so hope that this one exception to my respect and approbation - New Zealand's driving and the attitude of some drivers towards cyclists as expressed in the media and on the web - will not as it has in too many other countries, especially the UK, tarnish so enviable a reputation for common decency. 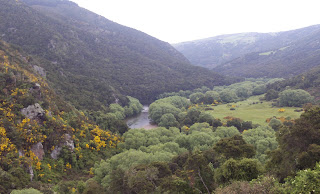 On Friday morning we left Dunedin's imposing railway station to ride on the Taieri Gorge Railway seventy kilometres westwards to Middlemarch in Strath Taieri ascending beside the clear gravel edged waters of the river edged by gorse and flax, against banks of Cracked Willow below tall elegant bare trunked Tea trees creating a shrubby canopy below slopes strewn with flowering broom and gorse, interrupted more and more by intrusions and escarpments of layered schist. 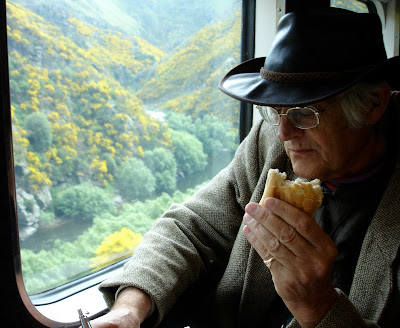 The river banks narrowed and steepened becoming rocky cliffs, with tall viaducts and short tunnels before we rose to the levels near Middlemarch to speed through an almost Scottish landscape of sheep, cattle and a lone horse cantering along a meadow by the track. There was food and drink, souvenirs for sale and a running commentary on the passing scene. At the front and back of the train were small open platforms on which to stand and gaze, take pictures, and smell the scent of broom.
An hour at Middlemarch, a village serving local farmers, backpackers and cyclists taking the Otago Central Rail Trail, and then a return to Dunedin by mid-afternoon. It was a good day out. My sadness is that longer distance rail travel in New Zealand is treated only as a 'day-out'; perhaps now and then for local freight. When I'd visited the fine station at Dunedin earlier in our stay, I asked if such a place was not an appropriate starting point for trains to all of New Zealand rather than the start and finish of a 70 kilometre tourist excursion through dramatic landscapes. "Was once" said a member of staff there, sharing my vexation at the subordination of rail to road traffic. One day this will change.