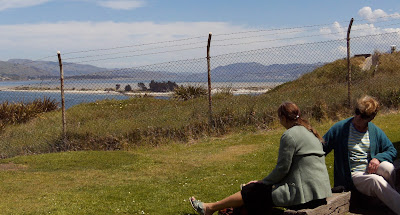 Yesterday we were driven by Val to Taiaroa Head along the winding corniche that winds 14 miles or more along the south shore of Otago Harbour - a long inlet between Dunedin and the sea created by the eruption of an ancient volcano. We parked by the Albatross Reserve at the harbour mouth. Opposite, hardly a quarter of a mile away, is the village of Aramoana on a dune spit where twenty years ago a man went berserk and murdered thirteen people. (On Saturday 13 November at Val's house we watched a showing of the film Out of the Blue made in 2006. I was almost glad of the distancing afforded by commercial breaks)
Around the reserve are barbed wire fences to keep us humans from disturbing the albatross breeding ground. We strolled the headland gazing at the sea and the cliffs, looking back down the harbour, sat on a log to picnic by a grass bank. Much as we looked we saw no albatross.
*  *  *
Earlier I'd visited the Chief Executive of Dunedin City Council, Jim Harland, and a colleague, Kevin Thompson, to get help putting together some 'critical incidents' for my seminar in Wellington next week. These are incidents that must be brief, contain enough truth to be realistically testing examples of the class of problem that can arise between a politician and a manager, yet not so truthful as to breach confidentiality, damage reputations or, indeed, be linked to real people or events. Tricky, but I got a good batch of problems, for example:


1.     Political-management workloads: Managers are working harder than members on your long-term council community plan (LTCCP). If members aren’t engaged in agreeing forecast projections, impact of growth and demand, links to community outcomes, levels of service, and asset life-cycle assumptions, managers may be accused of sidelining democratic process. Members are daunted by the workload. You’re meeting the Mayor - respected in his community; not keen on ‘management jargon’ - to urge him to get politicians more involved in work for which some argue they employ the professionals.

2.     Appointment: You are making an appointment to a post that is not normally the concern of members when you get a call from the Mayor who says “we think you should appoint X. to this post.”

3.     Greenhouse gas emissions: Council elections are six months away. Your members comprising a majority with strong Green commitments will have a fight on their hands from the local traders’ association concerned about lack of progress with the mall redevelopment. The Mayor asks you to commence a study of greenhouse gas emissions likely to come from the grand mall redevelopment proposed by the traders. She asks you to discuss this with her over coffee today.

4.     Declaration of interest: As CEO one of your members has applied for a grant for a project in which you know they have an interest that should be declared. Such a declaration is their legal responsibility not yours, but you are wondering if you ought say something to them.

5     Disclosure?: A councillor who has been a voluble critic of council staff, arranges a meeting in which they tell you they are keen to be better informed about the performance of the council and would like you to disclose information on the remuneration and terms and condition of employment of all staff. Legally you have access to this information and have discretion on disclosure. You know this is a grey area with different CEOs interpret their discretion in different ways.

6.     Guidance sought: The Mayor seeks your guidance on whether to have an Islamic Opening Prayer at next Council Meeting. She mentions Eid being celebrated in Parliament and the local involvement of the Islamic Women's Council of New Zealand supporting Muslim victims of family violence as well as organising other activities to do with local well being for Muslim women. ‘Wouldn’t this mark respect for the work of IWCNZ, especially as their annual conference rotates to us this year? It’s my call, but I’d appreciate your thoughts?’

7. Happiness as a KPI: There’s political interest in community well-being. The Mayor has been to the UK on holiday, and, having made earlier network contact, has met various social innovators in the flesh, attending a seminar on Measuring Happiness at Schumacher College led by Dasho Karma Ura from The Centre for Bhutan Studies. From the flight home the Mayor sends an enthusiastic email, asking you to assess the feasibility of introducing a local Happiness Index as a measure of the council’s performance. ‘Enough work has been done on measuring happiness for us to review this as a potential KPI without becoming a laughing stock. I want us to be able to say we’ve had a go at this.’

** ** **
From the reserve we headed back the way we'd come then at Portobello turned left up a narrow road, soon a dirt road, that led around Hooper's Inlet to a grassy car park below conifers next to a style and a path across a sheep cropped field towards the growing roar of surf, the ocean hidden behind a rise edged by marram grass and dense clumps of sweet smelling yellow lupin. 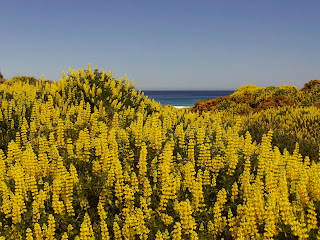 I passed through the flowers and saw a family sat by the slowly advancing tide, two small children colourful erratic satellites. Like something out of a conjurer's hat there poised before them a great black sea lion. It stayed for a moment shining and wet, then turning a little awkwardly it dropped and became a flattened shadow darting through the long shallow surf; the children with a life's souvenir. "Remember that sea lion when we were out at Allan's Beach Mum? Dad?" I folded my jacket and lay on my back as Lin and Val strolled the length of the beach enveloped in the sound of the sea. I wrote in the sand - σ 'αγαπώ - watching the tide swirling it away.

** *** **
Last June Oxfordshire County Council, in line with manifesto promises made by the Conservatives before the General Election and their coalition with Lib Dems, made a high profile decision to withdraw all its road safety cameras. So I'm rather pleased that the unpopularity of this measure has led to them being restored - though no politician will admit to making a U-turn on 'speed cameras'. Furthermore not only are we going to see their restoration, we will have, instead of ones for which those speedsters could slow as they spied it, new cameras deployed to measure average speed over hazardous stretches of road.
** ** **
The tags that my uninformed mind attach to New Zealand - their lamb and butter I've known in England all my life, Hillary and Tenzing on 29 May 1953, the All Blacks. the Maori, earthquakes and Lord of the Rings. Things I need to understand - much much more about the history of New Zealand, more about the Treaty of Waitangi, the terms Pākehā and Tūrangawaewae...


tūranga is a place, and waewae are your feet, so your tūrangawaewae is literally your “standing place”

...and how the people of Christchurch, Canterbury, and the rest of the country are coping with the earthquake that struck them at 4.35am on 4 September 2010 just after Val had arrived to stay with us in Corfu. Jim Harland, chatting to me, referred to a culture of rural self-help that has survived urbanisation, a tough regime of building control to enforce quake resilience, and education at every level on anticipating and responding to emergencies.


A lady in a shop selling novelties including colourful mosaic paving said that a customer from Canterbury had found her family china shattered by the quake. Seeing these slabs in the shop gave her the idea of how to keep the broken pieces.

Something else I've noticed is the lack of chewing gum on pavements, discarded cig ends, graffiti and litter. "It is about" says Val "but school children and others do regular litter picks." Three days on one town in South Island is a limited sample, but I've noticed none of the tedious wink wink nudge nudge sub-porn on T-shirts and postcards or in advertising than I've seen in Europe. Prostitution was decriminalised in NZ seven years ago allowing legal brothels with greater attention to action against coercion of sex workers and people trafficking. I've heard the f-word now and then among young men, but not so far on the TV I've seen, e.g. a chef famous for kitchen cursing seemed well-spoken or well-censored on a locally syndicated episode.
I like the the frequency of op-eds I've already read on how New Zealand might invent ways to pursue prosperity without the insatiable need for growth. High value is accorded diversity, supported by legal enforcement of equal rights, with less paranoia about 'political correctness gone mad'. I've noticed a favoured phrase from politicians and others on the media  - such-and-such is "totally unacceptable." NZ comes up on the 2010 UN Human Development Index as the third most popular country to live in after Norway and Australia, with Greece twenty-second, and UK twenty-sixth.


"Norway?" exclaims Lin "Who makes up these lists?"
"Well...the Norwegian government after the second world war, gave attention to finding ways to maintain their way of life as their industrial revolution took off. The Norwegian Industrial Democracy Programme...trying to find alternatives to capitalism and communism...trying to keep the best of their culture and tradition...yet being a competitive economy. " (My first mentors in my first job at the Tavistock Institute in 1966 were Eric Trist, and Fred Emery who'd picked up and spread the ideas of Einar Thorsrud, son of a shoemaker, and my friend John Martin, like Fred, an Australian academic, is wholly involved in the development and diffusion of similar ideas about how a population and its government can agree and sustain core human values amid turbulent change.)

According to Transparency International's 2009 Corruption Perception Index of 180 countries, New Zealand is the least corrupt country in the world, with the UK coming in 17th on this ranking and beloved Greece 71st.
To Val's delight, she being a nurse at Dunedin Public hospital, the threat to transfer their neuro-surgery department north to Christchurch has been lifted, following a prolonged public campaign against the proposal.
***
I've just responded to Jimmy Wales annual Christmas appeal to keep advertising off Wikipedia and PayPal'd $20 to the Wikipedia Foundation with the comment:


As an academic I encourage my students to use Wikipedia as a starting point. I use it that way too. I also value being able to use links on my blog - Democracy street - direct and as a portal for further sources. I have also submitted articles - on my step-father  Jack Hargreaves and on my mentor Denys Rayner and on my favourite urban green spaces, Handsworth  Park and Black Patch Park. I enjoy and value the iterative approach to knowledge - especially for instance in relation to my g.g.grandfather Henry Maine - that is the essence of Wikipedia. I also value the tough but mostly fair regulatory process that allows Wikipedia to maintain articles involving polarised and contested narratives. There's no such thing as neutral history but this must be one of the ways to head in the direction of that enigmatic thing we call 'truth'. Respect. Simon