A long excuse for getting home late 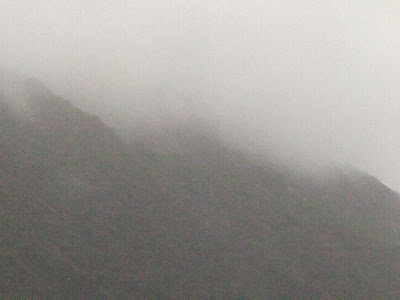 Mist and drizzle hides the sun and flattens the landscape. It’s cool. We had the quilt on the bed last night for the first time since April. Eight friends coming round for supper; our attempt to repay a small part of the hospitality we’ve been accorded. Not quite ten soup bowls or plates – at least not matching and the table needs extending and will they squeeze into this mixture of chairs? Bread, cheese, French onion soup and then spaghetti Bolognese followed by bread and butter pudding and cheese and biscuits with beers and wines and some brandy and chocs for those who want them. This isn’t to impress; just please, we hope.
**  **  **
As the evenings draw in I have been watching some of Jack’s films – not a few for the first time. I find this brings none of the pangs I felt when I glimpsed replays of him on screen in the years soon after his death in 1994. The reason I have these films is because when Paul Peacock was doing research for his biography a couple of years ago he met a lady who’d recorded about forty episodes from Southern Television at home on a VHS player. She sent them to Paul. He transferred them to three CDs as mpg files for me. The sound’s fine even if the picture’s fuzzy. I’ve recopied this collection to four people – one Mark our neighbour here and two more to people who’d met my stepfather and had been involved with his filming and one to someone who without asking me for them simply wrote saying how much pleasure he’d had as boy watching Out of Town and The Old Country. 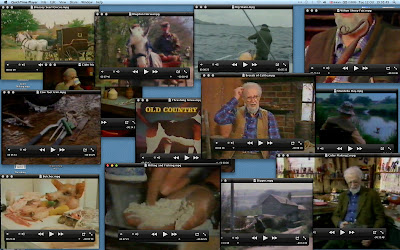 Jack's programmes reflect an ache for lost skills and displaced craft without ever being nostalgic, though he's unrelenting - in a bemused way - about the ways we have fouled our nest; about our social and political incompetence in dealing with life on the edge of abundance - the last phrase being the title of a 1965 documentary he conceived and scripted for Rediffusion by Bill Morton, narrated by James Cameron.
I see people are posting JH’s programmes on YouTube. I could object as holder of the copyright but why? People enjoy these and very few are critical, though at least one comedian has redubbed some out-takes to make fun. Meantime we have this much larger collection of Jack’s old films down at the South West Television and Film Archive – far better quality 16mm original film with ¼” sound tape. These can never be the same as my, and other’s, fuzzy recordings off air, as they don’t include the linking conversation in the studio shed that went at the beginning, middle and end of each original episode. We have the voice on sound tape, but no picture. At the Archive they are gradually digging through the collection and marrying sound to film. Now and then people get in touch to tell me they have another recording made off-air that I’ve not seen before and then they send me a copy on disk. Delighted when this happens, I stream the recovered episode on YouTube or Vimeo.  A BBC and a Sky platform have both recently asked permission to use JH’s film from SWFTA and from the published material on DVD by Southern Star now acquired by Endemol. I’ve left it with them to come to a commercial agreement with SWFTA and pay ‘reasonable’ royalties from the deal.
** ** **
Candles lit around the dining room. Our dear guests arrive. Not all at once but soon all are greeted with the local double kiss or handshakes and sat around the table as Lin and I bustle, the conversation keeps on from where we last left off. “How were things in England, Paul?” “The weather’s great. The gloom was among those on the plane coming here – hearing from the pilot about the rain.” “I like the rain” “Not if you’re here for just a week” “The cyclamen this year! Over above towards north there was a whole field – all cyclamen.” We spoke of water on the island and how the rich maintain their houses “Enjoy them for themselves and their guests. Let them for the rest of the year. Pay for regular care and maintenance. Keeping the pool clean. Lots of gadgetry now for clearing water. “This village is exceptionally fortunate for water.” “But why don’t we keep more rainwater?”
We started with onion soup with cheese on toast afloat. Lin and me passing round the bowls with help. All the while we had village rosé, local white and red wine, and a steady flow of cans of Amstel from the fridge – nearly all brought by our guests. I asked about the Blagdon horse I’d seen on one of Jack’s programmes, Brassey Searle and his Andalusian pair, but Mark had not yet seen those episodes.


Jack Hargreaves - Blagdon Horse from Simon Baddeley on Vimeo.
I spoke of how in a crisis the population might in England make use of horses again*. Who would know enough? I saw Katie, who’s young, smile at my dopey fantasy and Mark interposed with the opening tune from ‘Blackadder’, his face a mix of mockery and sympathy. I wonder what’s ‘being realistic’ these days? Second course was spaghetti – an intriguing new Italian invention involving lengthy strips of pasta extruded into the shape and dimensions of fencing wire. “You find the end and simply suck up the whole dish, passing the spaghetti through a spicy sauce of meat and tomato with peppers and mushrooms on the way!” “Genius!” “Blackadder...” 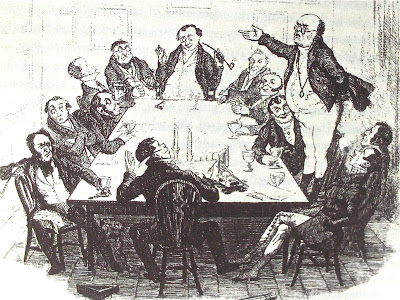 “But why are there no ghosts in Corfu?” “No ghosts!” We heard of the terrified fisherman who’d sought refuge on Vido one winter night and the low long laugh in the above his head.” “But that was no ghost. That was your parakeet" "OK. There’s a friend tried to enter our old house which had only an outside balcony. We’d often heard small sounds of movement upstairs at night. That evening the place was empty. He got part way up the stairs and of a sudden was enveloped in such cold.” “But some ghosts are kind?” “Of course.” I told of my panic in the windy olives on Aegina one night long ago. We touched on Cavafy and diacritics and how they did help with pronunciation compared to demotic. “I hadn’t recognised Λαιστρυγόνας when you recited” said Cinty. I’d handed her a book of the poems by then. “I know who’s Poseidon, and of course the Cyclops. Who were the Laestrygonians?” “Right bastards. Giants. Put paid to most of Ulysses’ companions and their ships.” We got onto boats. No. I steered the chat that way. “I know I know. In a motor caique you could get from Turkey to Ithaca in – what – seven days?” “So how come it took him seven years” “Don’t you understand” I pleaded “the weather in the Mediterranean when you have sail and oars can be a monster” “And” said “Cinty he’d displeased Poseidon by killing his son the Cyclops” “Who was that then?” said someone. “Polyphemus” “No seriously though…” “Blackadder blackadder…” I mouthed a curse. Smiled.  “Seriously though you know what I’d really like to have. A small loose footed sailing cutter with a centre board and oars. And perhaps an outboard. Work my way round the coast – Levkas, Prevesa, the inland sea, up to Paxos and Corfu. That’s not Lin’s idea of adventure.” “What do you do when the wind gets up against you?” asked Sally “You don’t say ‘I’m supposed to be home by six’ and try to weather it. You run before it, even haul up on a beach, sleep in a bivvy. Wait until the weather’s on your side.” “That’s why Ulysses took seven years getting home?” “With lots of stops for seduction and enchantment” said Cinty “...and having your chaps turned into pigs? Come on.”  “The Odyssey’s a long excuse for getting home late.”
After spaghetti we had a short wait for the pudding. “You know I don’t understand why Maria or her husband don’t open up the kafeneon. We could have our own bit there.” “… in another ten years we’ll be the old blokes in the village…” “...vexing about the young and politics over backgammon” “Anyone ready for pudding? Wait ten minutes?” Why not. During the whole evening I don’t recall one pause in our conversation. 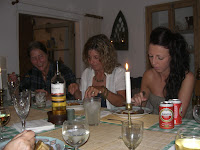 “Maria in town the other day was saying that young people’s expectations are far too high.” “Whose fault’s that?” “No no. Why should you expect to own your own house, have a car, go on foreign holidays, take university for granted?” “Because of the bastards that sell debt to impressionable kids. Live off the interest on their undeferred desires.” “You know how sub-prime mortgages worked? Talk about legerdemain. These creditmongers. How they hate people who pay for things in cash they’ve saved.” “Come on. How would the world survive without credit” “Ah! Yes indeed. You know those ugly houses with iron rods sticking out above the first floor. That was the old way. You built what you could pay for. Now there are banners flying outside a show home; a little office inside with shiny brochures. Complete house. Fitted kitchen. Downstairs WC. En suite bathroom, shower, bedroom. Central heating. Patio with electric lamb roasting spit. 'Oooh! Aaah! We couldn’t possibly afford all that.' 'Come into the office and let’s go through some paperwork…says the spider to the fly.'"
Lin brought in the bread and butter pudding. “Anyone want it with ice cream or just cream or on its own?” That was finished swiftly; plates and bowls piling up in the kitchen next door; empty cans crushed and removed and replaced, glasses filled, people helping each other to drinks and with serving. “You know about the brother whose body was found in a sterna in Barbati, six months after he was thrown in it?” “That must have messed up the water” “Don’t talk of it.” “Some villages here in winter, there’s tumbleweed blowing down the street” “Doors slamming in the wind. Creaking.” “Whooo-ooooh! Whoo-ooh” “Tall trees lost in the dark” “Blackadder. Blackadder...”
We finished with brandy, chocolates, coffee. “How do you make Greek coffee?” I asked Cinty. “It depends” She ran through a list of all the different kinds, which of course included skirto and gliko but other combinations. I’ve promised myself I’ll learn. “Let the grounds settle. Don’t have it too hot. Never add milk.” Sally as she does took her leave earlier than the rest, but looked back from the porch to say “see the stars tonight” “Starry starry night” sang Mark “”It’ll be foul tomorrow. Really wet.”
After everyone had gone Lin and I bagged bottles and cans and paper napkins and set about the washing and drying and tidying the table and chairs, putting things back in their places. Silent. “So?” “What?” “Well?” “It was good.” “Yes it was.” 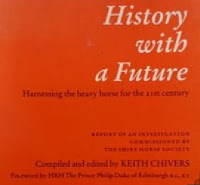 *Keith Chivers' 1988 report for the Royal Agricultural Society of England called History with a Future: Harnessing the heavy horse for the 21st century, published by The Shire Horse Society