I'm being tutored by Niko, at Apple Store in the Bullring, in using blogging software, which will allow me to put together pages offline, save time and, no doubt, expose the clunky ways I've been going about putting together Democracy Street. We've looked at Blogo, ecto, MarsEdit, iBlog, while checking my blog to see if we can streamline and otherwise tweak it to avoid some of the 'freeze' and slow-down problems reported by some people reading it - not good when I'm trying to increase access to films, especially of members and officers in conversation. Some of the pleasure has been discussing the exuberant jasmine on the house opposite the health centre on Democracy Street and a black and white panorama of me in Wales on holiday taken by my mother with her Rollieflex. I've ended up going for the least expensive - ecto - almost instantly paid for downloaded and registered while still at the One-to-One desk.
*** ***

On the train departure and arrival board in the concourse of Thessaloniki Station* the place that most of the world calls Istanbul is called Κωνσταντινούπολις. There is an enormous gap in my historical knowledge. It covers eleven centuries - between AD 330 when the Emperor Constantine moved his capital from Rome to Constantinople and 29 May 1453 when Sultan Mehmet won the city for the Ottoman Turks and for Islam, the Emperor Constantine XI Palaiologos, revered as a martyr in the Orthodox community, falling in final Greek defence of the city. Έστειλα δυό πουλιά στη Κόκκινη μηλιά που λένε τα γραμμένα το 'να σκοτώθηκε τ' άλλο λαβώθηκε δεν γύρισε κανένα....

I sent two birds to the red apple tree, of which the legends speak. One was killed, the other was hurt, and they never came back to me. Of the marble emperor - το Μαρμαρωμένο Βασιλιά - there is no word, no talk. But grandmothers sing about him to the children like a fairy tale.I sent two birds, two house martins, to the red apple tree. But there they stayed and became a dream. (trad.) 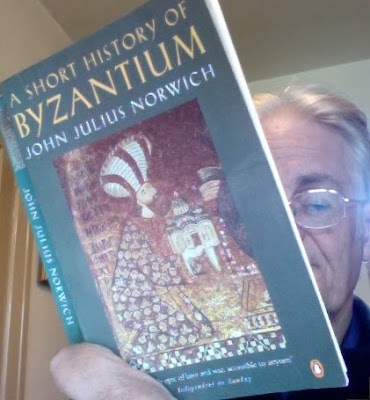 'Pray that you never lose your capital'
We learned at school how the fall of Constantinople caused a westward migration of Greek scholars and artists seeding Western European Renaissance with the culture of Classical Greece and hence, a century later, the early light of the Age of Reason, that terrifying wonderful enlightenment still resisted, even fiercely opposed, by most of the world.
[Back to the future 22 Oct 2012 ~ intimate connection between the fall of Constantinople and the European Renaissance is challenged. Even the timings do not coincide, given the development of Italian wealth and culture for two centuries prior to 1453; the understanding that scholars escaping fallen Constantinople sparked, rather then perhaps fertilised that culture, no longer stands firm. Another thing I learned only now...the city wasn't renamed Istanbul in 1453 after its fall.  Ottoman records show that its name was transliterated as Kostantiniyye. The name of Istanbul derives from the Greek phrase 'to the city' = Eis tin polin, Εις την Πόλιν. This usage may have simply spread. The name 'Istanbul' only became an official name under a 1930 Turkish Postal Law accompanying the reforms of Kemal Atatürk]
I touched on the history of Byzantium at school, mainly as the decadent dominion left in the east after the coronation by Pope Leo of Charlemagne in AD 800 and the rise of the Carolingian Empire in the west, but, except for reading Robert Grave's Count Belisarius, I've learned little since. Istanbul, even for a keen archaeologist, is no Byzantine classroom. The great cathedral - the Great Church - of St Sophia became a mosque and in 1935 under Kemal Ataturk's policies of secularisation, it was transformed into a museum. It's been the historical references in many of Cavafy's poems that has aroused my interest. Cavafy's classical references may be familiar to me, his Byzantine one's -part inspired by the work of the 19th century historian Constantine Paparrigopoulos - not, yet his work, like the work of Paparrigopoulos, connects them. Writer, journalist and translator Maria Margaronis writes of Cavafy:


...that living outside the young Greek state among Egyptians, Greeks and Jews, he could remain committed to a fading, idealized Hellenism free from the crude taint of nationalism and borders. He told Forster that the Greeks and the English were almost exactly alike, except for one crucial difference: "We Greeks have lost our capital -- and the results are what you see. Pray, my dear Forster, oh pray, that you never lose your capital."

*Back to the future - Feb 2011:... due to the financial crisis international rail services from Greece have been suspended. The Greek railway system used to connect with the railways of neighbouring countries Bulgaria at Promahonas (Koulata) and at Ormenion, with Turkey at Pythio and with the railways of the Republic of Macedonia at Idomeni. The passenger services from Greece that run to neighbouring countries on December 2010 were: Thessaloniki – Istanbul (Dostluk/Filia Express), Thessaloniki – Sofia – Bucharest, Thessaloniki – Idomeni – Skopje – Belgrade, Athens – Sofia.
*** *** 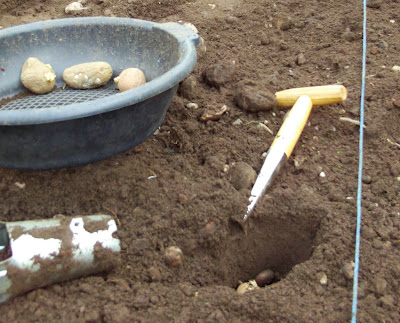 This is the sort of thing that happens when you're starting and don't read the instructions to lay out your seed potatoes to help then sprout - chitting. I took the box as it arrived by post and left it several days before taking it out to the allotment and planting the spuds - a mix of Carlingford and Marris Peer - 18 inches apart in rows 18 inches apart. As it is they're buried 3 inch deep in prepared and moist soil without the strongest of sprouts. Some have even gone mouldy. We'll see how they grow and learn. I'm starting to get the jargon of potatoes - first earlies, second earlies (those I've just planted), early maincrop and second maincrop. I've also planted a couple of small trees - a cherry and a balm-scented poplar, smell redolent of my childhood, where they grew in the lane to my grandmother's house in Clavering. The one I've planted is from a cutting from a sapling, now a tree, my mum had taken to Scotland. Continuity. I've also planted a buddleia and flowering ground cover along the edge of the plot. What have I learned? Lay out the seed potatoes before planting in a dry frost free place and let them grow sprouts about half an inch long and then plant with at least one sturdy sprout facing up.
All the same I guess we've started. My hope is to have a shed in place by the New Year, so's I can sit inside hearing the rain on the roof sipping a cup of tea, with the whole plot well dug over and ready for cultivation. 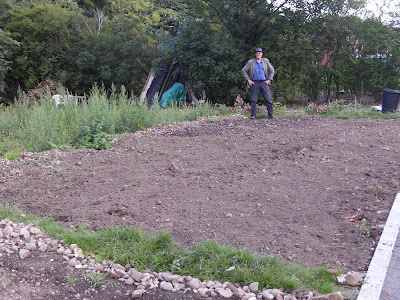 One third of our plot is ready 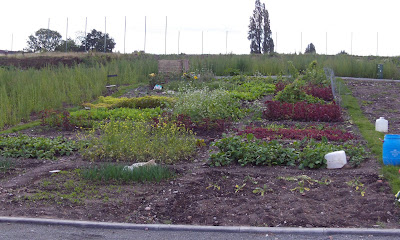 What some have done since June
** ** **
An ugly story from the southern end of Corfu (map of the whole island) preying on women around the package tourist resort Kavos-sur-merde - Corfucius' moniker for the island's contribution to what Hogarth, George Cruikshank [piece by contemporary cartoonist Steve Bell], Thomas Rowlandson and James Gillray recorded of Rude Britannia. An alleged rapist and robber has been arrested after police surrounded the woods in which he was hiding. 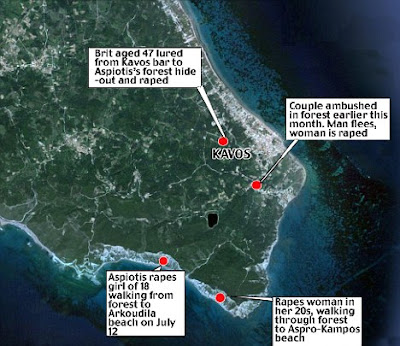