I understand why, instead of simply yearning to arrive, I should ‘pray that the road be long, full of adventures, full of knowledge’ [νὰ εὔχεσαι νἆναι μακρὺς ὀ δρόμος, γεμάτος περιπέτειες, γεμάτος γνώσεις… na efkesay nanee makrees o dromos, yematos peripeties, yematos gnosees…pray that the road is long, full of adventure, full of knowledge] If I miss those adventures and extract no knowledge, the failure’s in me - ὴ ψυχή μου – in my lack of choice feelings - ἐκλεκτὴ συγκίνησις. Thus the world – any world - can be transformed by me, and I need encounter only that ugliness I carry within myself. Thus I cross the adventureless flatlands of Gatwick - a place whose management necessarily strive through actuarial calculation to avoid adventure, in the name of risk avoidance. For Cavafy who died in 1933 flying, which I doubt he did, was still an adventure, but in 2010 apprehensions about getting to the airport on time and, once there, boarding a plane, has almost erased the apprehensions that made flying intrinsically exciting.
Instead of anticipating hazard in the air, I anticipate it on the ground; industrial action by airport staff on the date of our flight, a train from Birmingham that breaks down and is diverted – because it’s Sunday, missing train tickets  - “I swear I had them”,  mislaid passports, unprinted boarding passes, milling around the cloned shops of the main concourse with crowds of fellow travellers, routine flight delays, missing a flight call - “Lucky I checked”, ingeniously novel security routines, new hold baggage rules, the risk that stressed by these prospects – most of which don’t occur - I will, on being ordered to observe some seemingly pointless regulation, become incensed and be led away by airport police and banned from flying. To maintain equanimity I smile a lot, hoping to produce natural analgesics, but the curve of my mouth, unrepresentative of my real feelings, becomes a rictus. By way of remedy I repeat, under my breath, the lines “…νὰ εὔχεσαι νἆναι μακρὺς ὀ δρόμος, γεμάτος περιπέτειες, γεμάτος γνώσεις.”
Yet after hardly an hour’s extra wait we had front seats on an EasyJet airbus, I with coveted leg room courtesy of Speedy Boarding, a following wind to Greece that almost made up our delay, a genial pilot keeping us in touch with progress, an impeccably efficient cabin steward and crew, a pleasant picnic made up at home that morning (smoked salmon in new bread rolls), the usual easy run from the plane to arrivals at Kapodistria; our car waiting for the completion of minimal paperwork and we’re driving through Corfu city heading the 15 kilometres north to Ano Korakiana and Democracy Street in the warm darkness, arriving around midnight to a house tidied by Honey, fridge humming, bed made, and sleak familiar cats paying court to our return. Roughly unpacked, we stood on our new balcony and gazed on moonlight quiet and I wondered what I’d been grumbling about.
*** *** 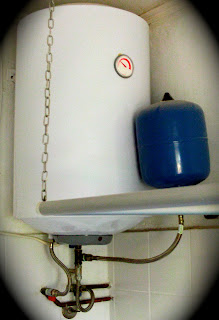 Water heater not working: what would Ulysses have done?
On Monday morning I got up to find our water boiler wasn’t working. Γεμάτος περιπέτειες, γεμάτος γνώσεις. Of Ian and George the electricians we know one was too busy, the other unobtainable. We discussed. “There’s a thermostat and an element. Start there.” We visited Fran and David for tea – always helpful. Dave told us of a plumbing supplier opposite Sconto at Tzavros and took us through draining the tank, removing suspect parts. Back at the house I started the drain, which shrank to a trickle, then, having disconnected the electrics after putting a photo of the wiring on my laptop, I used a bottle spanner on five bolts holding the element in the boiler. Easing off the last, the rubber gland burst free from the cavity. A rush of brown water full of white flakes of lime soaked me, flowed into the hall, where it was mopped and swept by Lin, soon drying in the heat. The plumbers’ supplier had just the parts needed. Nikos there gave me careful instructions on reconnection, and with the new thermostat and element sold me plumber’s string - στεγανοπόιτικο νημα σωληνωςεών - for sealing pipe joints. As a double check I had Alan take me through the circuit diagram to be sure I grasped the principles. Once home Lin did the rewiring, re-attached the housing below the boiler, while I tightened the plumbing. We stood clear as we closed the circuit breaker and pressed the hot water switch in the hall. On came the thermostat light; no seepage from the pipes; water began warming. 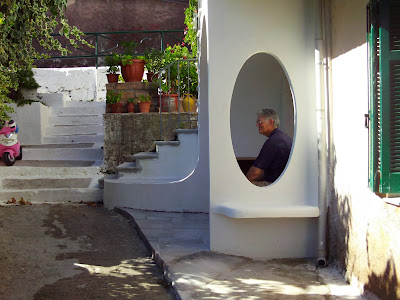 Water in the taps was acrid and stale even in tea from months without rain and withering heat, though all around is green, our small garden overgrown with vigorous weeds, soon cleared with bill hook, and small saw. We sat out on our new balcony – the old one at last replaced – and as we’d promised ourselves and Vasiliki, Natasha and Lefteris – said ‘γειά σας!’ and ‘καλημέρα – to people passing on Democracy Street. We looked at the curves that Alan had crafted on the porch, the oval that lightened the shade, the wooden insets above our door and on the little cupboard, the cornices and mouldings on every step and the smooth firmness of Michali’s sturdy railings. I carried our small marble-top table on to the balcony. Lin added two wooden chairs. Our public connection to the street – cut off by the previous owners - is re-established. Nikos, husband of Sophia, whose old house on Democracy Street has been so finely restored, was passing and stopped to greet us. He wound down his car window “We like your balcony very much. Alan is an artist!”

We called on our neighbours and enjoyed coffee and news of just how hot it has been, even for villagers. Tentatively trying out some of my new Greek words I found they seemed to work, and Natasha added with more, helping explain the contrasting uses of Omega - Ω - and Omikron – Ο. Omega tends to be for actions, verbs, doing things, while Omikron is for nouns and adjectives and so on. Later with Val, Lin’s cousin, come to stay from New Zealand, Vasiliki brought round fruit from her garden garnished with flowers. 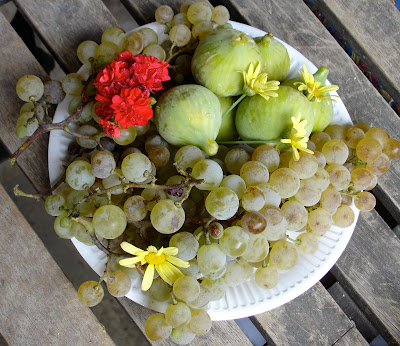 Everyone accorded praise to the balcony, stairs and porch. Leftheris told me of the church tower he and his brother Nikos have been building below the village, using cornice moulds he’s borrowed from those Alan made for the balcony. 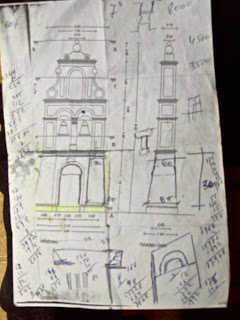 We’ll go and visit this tomorrow. On Friday we went at last to visit the island’s iconic Pontikonissi – the picture from Corfu on brochures, tea towels, place mats and coasters – which invariably omit its proximity to the large carpark at the end of the airport runway. It's nicknamed Mouse Island because, when they were easier to see, the steps up to the church seemed like a mouse's tail. Even so when we got to the small chapel on the well-used island assailed by the deep roar of aircraft engines revving for take-off or the shadows of planes passing hardly a hundred feet above I was drawn to the place – something about a boat ride to a small island to see an old church dissolved jaundice. It seems to have evaded commodification. 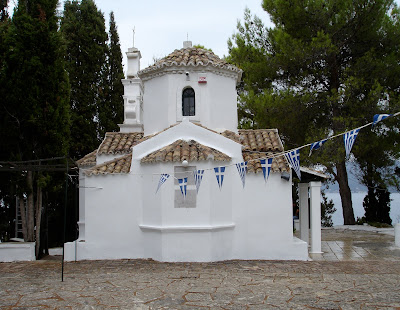 ** ** **
Harvesting gossip in Ipsos and checking on Summer Song, I learn that Dave and Trish have sold their boat to Russians and, worn down by new planning laws abandoned the plot on which they’ve hoped to build a house, returning to live on their son’s Ben’s boat, while looking out for another for themselves. We’ve learned that Dave and Fran, tired of a neighbour from hell with ever-barking dogs and other anti-social habits about which the authorities have been unable or unwilling to act, have sold their house to an Athenian doctor who’ll head the neuro-surgery department in the new hospital at Kontokali. We’ve heard of a series of skillful robberies in the village – a few months ago – in the early hours when sleep tends to be deepest. No violence and only cash. One entry was through a window the glass they’d broken wounding the burglar whose blood has linked an arrested man to the crime. In the village yet more houses have been renovated. Work continues on others. 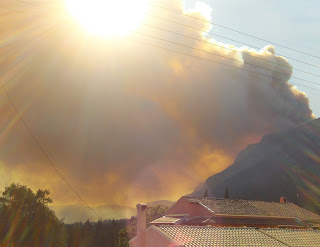 Today and yesterday it has rained – slowly but steadily increasing. Βρέξει. It’s grey, overcast, mild and good for the ground. Already the water’s better from the taps. But it’s a great shame that rain did not arrive two days earlier as seven fires, the worst of them on the mountain tops above Skripero blown towards us, spreading smoke across the landscape and through the village. Democracy Street was full of shared chat, the children excited. One after another the fire planes and helicopters have headed up from the south, hardly a mile apart, bombing the flames with water; all next day continuing to damp down the fire margins. Heat, wind and dried undergrowth befriended fire but seven on one day attracts the suspicion of arson.
_____________________________
Early Saturday morning Val was phoned by her son in Dunedin with news of the worst earthquake in New Zealand since the 1930s - centred on Christchurch about four hours' fast drive north of Dunedin. We've been following events, relieved at the low casualties (so far no deaths) in part because the quake came when most people were asleep at home.
Posted by sibadd