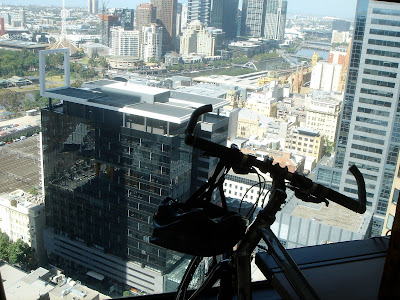 John's old friend Jeff Floyd lent me his fine bicycle which I collected this morning from a floor high over central Melbourne, heading south along the Yarra to the shore at St Kilda, still far from the swells of real ocean but sandy and blue and built-up, just kilometers from the vertiginous architecture of this great city. The great interior and the vast uninhabited ocean shores remain remote, but for glimpses through a plane window and the genius of the indigenous genii who’s art seen this afternoon, when I cycled back to the city, has imparted something of what I’ve yet to learn; something which D.H.Lawrence in his genius seem to miss - 'this speechless country'. No longer and I don't mean just the Mabo Case or Paul Keating's Redfern Address, or Kevin Rudd's magnificent speech on 13 February 2008, or the Aboriginal Tent Embassy which I saw when John cycled me around central Canberra, but an epic - known and yet to be known - that will flow into future understanding of Australia and the world. 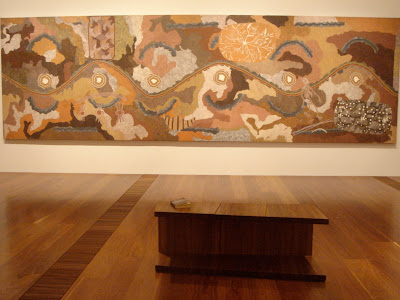 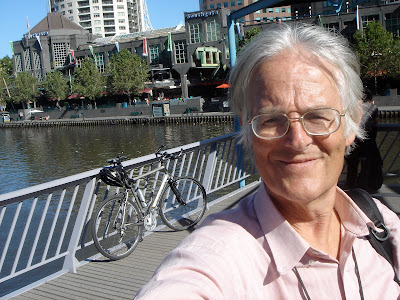 But why turn my experience of a few weeks in Australia into painting by numbers? What might be fun would be to see how my judgements shift; what changes these swift weeks have made in my character.
There's the sense of understanding more about the negotiated space between politics and management, through the thinking of John Martin, now friend and colleague, studying the relationship in Australia; from John’s and Annie’s film – especially – of the conversation between the Mayor and CEO of Marion. This demonstrated the way a role-determined tension between political aspiration and managerially stewarded limits - legal, technical, financial - is resolved – over and over, by unique individuals who get better and better at it.
That demonstration of the personal workings of government also shone a light on the position and role of professionals in that mix whose grammar we’re striving to make more intelligible. Here there’s a professional who cares so much about the difference between almonds and jacarandas as part of the landscape of a street - a place - fretting about root-falls on understreet services – invisible to most. We’re still parsing this conversation. John’s used it on his own with one set of managers and councillors. I will use it in England – an exploration of how managers broker the relationship between the professionals and the politicians in government – made real In animated conversation between leaders - politicians and managers - at the apex, negotiating overlapping spheres of activity and interest. 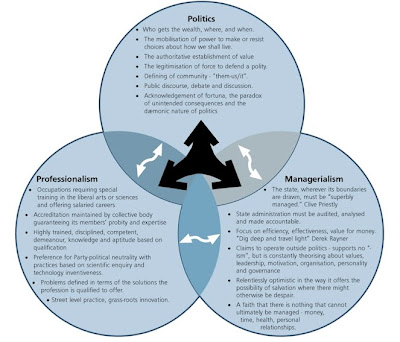 As my train on Monday morning hurried south to Melbourne, through Castlemain, Malmesbury, Kyneton, Macedon, I drank up the landscape washed by a weekend of steady rain, still insufficient to fill the creeks and lakes so thirsty is the land itself, our speed at moments blending iron bark, grass, corrugated iron, yellow red stone, and clouds that reach beyond horizons I've glimpsed over a wing.
From my comfortable and inexpensive seat on the train I see stretches of the road on which I’ve been driven several times to Melbourne Airport to catch airplanes to the edges of the continent – Perth, Darwin (via Alice Springs), Brisbane, Canberra, Sydney, Adelaide and Launceston. We calculated, John and I, that by the time I’m home I’ll have travelled 47000 kilometres, over 29000 miles. I asked an environmental campaigner about this at the conference at Bendigo on Energy Futures, after he’d shown us a clever clip of flight movements across the world. He had no imperative. He mentioned George Monbiot pondering the same. Could you give up friends made across the world through the benefits of flight? “He calls them love miles"
*** *** *** I sent Paul in Agios Ioannis some pieces from the blog that might interest him for the December Newsletter, having failed so far to put together thoughts on the reciprocity between Ionians and successive Lords High Commissioners during the Protectorate - the theme of my chat this February at the Durrell School. 'Paul, would any of these do?':

Some of the most beautiful in Northern Greece - Koliopoulos on 'plundered loyalties' in Macedonia
Yearning Burning Earning and again - the commodification of Greek land, the 2009 fires in Athens and the Hellenic Cadastre
The missing commentary - The Parthenon Marbles
"Which side then has committed more crimes - right or left?" - ο Eμφύλιος.
Bad building on Corfu
Long ago in Aegina - Yannis Moralis and my Greek stepmother, Maria Roussen
Shades of grey. Corfu in winter
The curse of bottled water
Consumerism - upon which most of us depend...

Greece and Melbourne mingle in my current reading - Christos Tsiolkas' Loaded - an excellent introduction to the city - East, North, South and West - for the average tourist with guidance on places to visit. I'm jesting. This is a Melbourne Sorrows of Young Werthe written in 1995, made into the film Head on, driven by the manic confusions of voluntary transportation to Australia, Greek parents with peasant roots who require land to feel secure, who 'migrated to escape the chaos of history' who 'know fundamentally, property is war' that:

Possession of land, of more and more land, is the means by which an uneducated, diasporic community enables itself to rise in the New World and kick their brothers and sisters in the face, in the balls, in the cunt. p.143

This Australian sturm und drang is unremittingly ugly - sexual and substance self-harm dancing to music that hurts and endless arguments of the kind that makes troubled youth so bloody irritating to the forgetful old - who've got their own problems. Wimpishly, I felt like hiding the book's well-lit pages from neighbours on the plane lest they think I'm reading porn, albeit funded by the Australian Council for the Arts. Ari, Tsiolkas' loaded antihero, loathes cars and suburbs and a lot of other things including the 'weakness' of his Greek parents. He was already 30 when Loaded was published. The book's unconsoling vigour brought to mind E.M.Forster in Passage to India, which I mined for A-Level 40 years ago:

Most of life is so dull that there is nothing to be said about it, and the books and talks that would describe it as interesting are obliged to exaggerate, in the hope of justifying their own existence. Inside its cocoon of work or social obligation, the human spirit slumbers for the most part, registering the distinction between pleasure and pain, but not nearly as alert as we pretend. There are periods in the most thrilling day during which nothing happens, and though we continue to exclaim, “I do enjoy myself,, or , “I am horrified,” we are insincere.

As an Englishman with mainly Scots roots, linked through my dad to a Greek stepmother and half Greek family set of sisters and half-bro, and parents who divorced in 1949, brought up by my mother and stepfather now living in inner-city Birmingham and the most congenially beautiful village in Corfu and re-visiting Australia, Tsiolkas' rich writing speaks of a misery in being young that I only half recall if at all, being largely distracted from self-harm by the ocean and all the possibilities of a life privileged by the imagination and talent of those closest to me, and located by English private boarding schools from the age of six - an indoctrination so robust I didn't start to peel it away until I was into my 30s, largely impervious until then that a peel even existed, and wasn't something that I could being to write about until I was well into my 50s, when I'd assembled some experience. I'll read more of Tsiolkas, as also Tim Winton, and thank the Brisbane bookshop owner who pitched me at just two consummate artists to be going on with, narrating the history of Australia as surely as its great physical explorers, matching the new cartography of its emerging indigenous artists.
[Back to the future 17 December 09: A finely written diatribe by the Sydney columnist Elizabeth Farralley, against suburbs and MacMansions and Australia's love affair with ugliness - see the comments too]
*A very different take on the Greek diaspora, comes from Stavros, author of My Greek Odyssey:
* * *

Look how the floor of heaven Is thick inlaid with patines of bright gold: There's not the smallest orb which thou behold'st But in his motion like an angel sings, Still quiring to the young-eyed cherubins; Such harmony is in immortal souls; But whilst this muddy vesture of decay Doth grossly close it in, we cannot hear it.

It reminded me of Richard's picture last year when he stayed with us in Ano Korakiana. 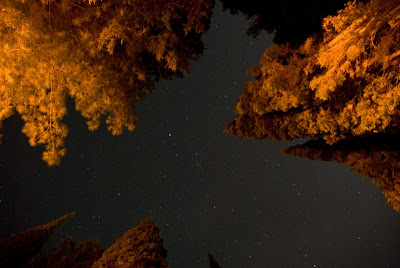