The earth turns towards the sun


About 1951, by lying his way out of insistence he be accompanied up Olympus, young Kevin Andrews, had the mountain’s many peaked summits - the Mítikas, Lesser Mítikas, the Skala, the Skoliό, the Stephàni and Prophet-Ilías – to himself – a last ‘act of irresponsibility’ before the ending of his youth. A detailed route was given him by a retired Greek general who'd often climbed to the summit, whose first ascent was claimed by the Swiss Alpine Club in 1913. Yorgi, an old soldier detailed to guide Andrews on the lower slopes, suggested ‘first’ be parenthesised. Shepherds had long herded on Olympus.
“We used to go up there when we were boys, chasing the goats up on the topmost pinnacle of the Mítikas itself, but I haven’t been there since I was sixty…when our goats get lost on the summit we have to bring them down again.”
This morning’s minion was a pink reflection on the flat sea this side of the Corfu strait beyond the shadow of the mainland heights. Around 7.20, with no breeze to flatten it, a wave of mist poured, as over the down-turned rim of a basin, into the valleys between the hills above Ipsos, Analipsi and Dassia, floating below our village in the direction of Skripero. We still speak, and think, of the sun ‘rising’, yet there were surely villagers in Ano Korakiana seeing what I’ve just seen, and shepherds on Olympus, gazing on the same process amplified, who knew the world tipped towards the sun long before Galileo struggled with the Inquisition to prove the fact among men who would one day see, from space, the round earth turning. Andrews' book, bought second hand, is lightly marked in black ink by a previous reader who seems to have been asking questions that interest me. I noticed later, inside the cover, the name ‘Michael Moralis August 1985’. He notes some different passages from the ones that catch my eye, but I feel a companionship with my preceding reader – with his curiosity and his name. Kevin Andrews, p.185: On his way towards Kalamata on a route up to the Langádha Pass, Andrews sees a village with burned-out houses. No-one locally will tell him who is responsible. A little later, a man on his road, a merchant refugee from Smyrna with a ‘thin cultivated voice’, offers his donkey to carry Andrews’ pack. They talk as they walk. Andrew feels it safer to ask ‘the question to which I had long been seeking the answer:


“Which side, then, has committed more crimes here, the Right or the Left?” “I can only tell you the side that happens to have most power in one district or another also has the most opportunity to commit them.” ’

Mark Mazower noted this careful answer. I know I’ve seen it quoted in one of his books. There are other conversations in this tenth chapter - most powerful when Andrews ponders the murderous actions of his friend Kostandi. He does not judge but he allows himself his angriest passage (margin marked by Moralis):


‘Perhaps the blood on his hands was less, in the scale of things, than the desecration of one man’s private and essential value (that was all he had to begin with, and end with); less than his uncritical, unquestioning adherence to the revolting shame of lesser people’s stupidity, cynicism and cheapness – and everything else that oils the all-pervading and hospitable machinery of unchecked power. But I came to no conclusions on the subject, either then or later’

Yet Andrews leaves a message in the remark of a Kalamata fishmonger with whom he chats while waiting for a bus to Methoni (inside whose crumbling fortress I strolled with Lin and Amy with such pleasure 12 years ago). He puzzles with the fishmonger about Kostandi:


“...the most likeable person I may ever have met. As I know him, he’s good through and through. Apart from terrific courage, he’s the best husband and the kindest father: a person who hates to cause embarrassment or unhappiness or disappointment to anyone he’s fond of. Yet he has slaughtered so many people that he’s lost count of the number…and he’s not even anxious.” “How do you know?” “Because he’s proud of it” … The fishmonger says (another mark in the margin) “He won’t always be proud of it…Because you can’t always stay with the outer form of things – things like honour, power, revenge. Some day he’ll come to a crossroad, a moment of crisis, of judgement. Everyone meets it sooner or later. And then he won’t be able to escape himself. That’s when his life may begin. But it won’t be your business.”

Nicholas Gage knew this - certainly intuited it - when he’d the guts to stay himself from killing the man who’d murdered his mother Eleni of Lia in Epirus.
* * *
It seems such a long time ago - in experience rather than time. The advertisement on the internet, on eBay, spied by our daughter, said:


Snapdragon Sailing Yacht 28 Foot, Lying in corfu on a permanent free mooring. We have lived aboard her for the last 14 years. YSE Yanmar 12hp diesel engine 300 hrs since re/con, Bilge keel nearly new sails, wired for 220volts, Inch hot water system, Full 6 foot standing room throughout, In very good condition. Its my dads yacht you can phone him in Corfu for any technical info on 0030 26610 *****. We can arrange to view at Corfu, at your cost if you wish! Email for info, thanks for looking

Lin and I were trying to recollect the key things remembered about our different stays in Corfu since that moment when I clicked ‘buy now’ on that eBay ad for ‘Summer Song’, while sitting at our kitchen table in Handsworth on 23rd July 2006 at 13:11:33 BS, before they fuse into each other. When recalling these most recent winter weeks in the village, what we will especially recall, is the company of the friends we've made and our gratitude to Alan for taking us under his wing so that after initial hiccups electrics, stove, floor and roof are either complete or ready for our return before Easter. Today has involved tidying and packing. "I don't want to leave" said Lin. 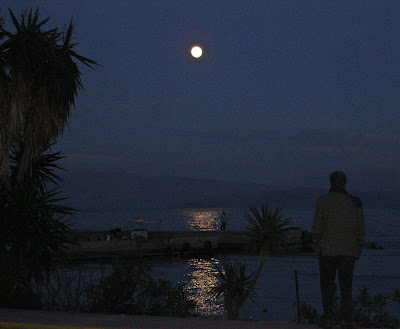