Getting ready to go to Greece 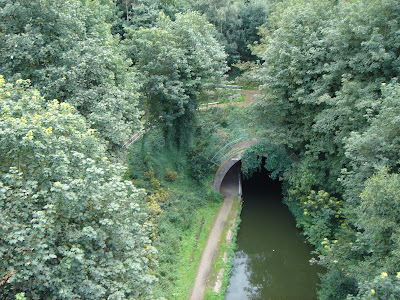 Coming back from a meeting in Stafford to plan scrutiny seminars later in the year, I decided to get off at Smethwick Galton Bridge. What makes this location a delight is that the station contains, on separate levels, intersecting lines to New Street and Snow Hill - both going to a destination hardly four miles away, yet, at Galton Bridge, forming a cross roads which makes me lose my orientation as I emerge with my bicycle from the lift to take another lift to get to the street exit. There are surrounding roads and junctions and a pedestrian walk - Roebuck Lane - across Thomas Telford's high Victorian cast-iron bridge, from which you see - a few yards away - another bridge carrying trains from the north, and then, peering over Telford's fine railings, I glimpse a smooth zigzag leading down to the towpath of the Birmingham main-line canal and know my way again. I headed down the slope and cycled a mile and a half to the exit next to Black Patch Park, inspected the place and headed up to the Soho Road and a long meal at Sangams before going home. 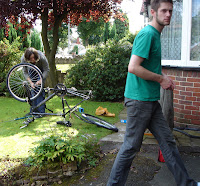 Amy's finally reclaimed her bicycle from our garage, changed the knobbly mountain tyres for hybrids. I gave her a lesson on mending punctures, changing tubes, putting talcum inside the tyres, checking pressures. I fished gadgets for her from my tuck box of cycle bits and pieces including a light set. So now she's cycling into the city centre from Minworth via the Birmingham-Fazeley towpath. ** ** ** 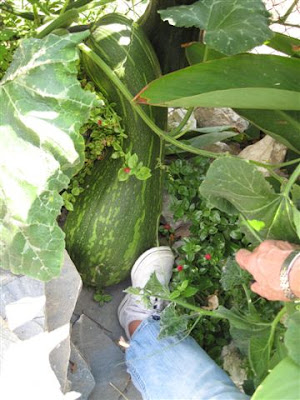 Honey snaps a marrow in the garden at Democracy Street
Lin's packing our cases. "Let me know the books you want to take." I'm getting ready for the journey, thinking about where we're going and ticking off jobs to be done here - tap washers changed, lawns mowed; physical things. Preparing for work can be done anywhere. Honey's sent us pictures of the garden at 208. "Lots of weeds but we'll have lots of stuffed marrow." Yesterday Richard drove me down to Rock Cottage. 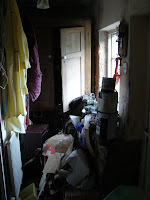 It needed checking for damp "and hornets" said two friends who'd stayed a night instead of the week they'd planned. Switched to 208 we've been spending little time in the Forest of Dean. Wabi sabi (侘寂) cottage - a place of such happy times as the children were growing - bought the year Richard was born, 70 miles south of Birmingham, approached by a footpath up Bell Hill in the centre of the long village of Lydbrook, backing onto the forest - another village with a band.
We trudged up the steep familiar path to the cottage. It wasn't so bad. Dusty and musty perhaps. I put the heating on; electric blankets; scrubbed out debris from mouse-riven tea bag boxes in the kitchen drawers and swept the bathroom, cleaned the bath and shelves; cut away the Virginia creeper filling the gutters and the bramble tendrils reaching for windows and under the doors. How swiftly the forest takes over. 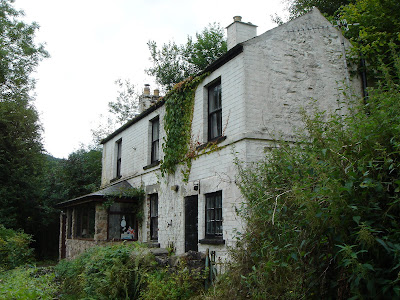 Once the beds were made up and the messiness reduced we left and went further into the forest, stopping in a layby beyond Ruspidge. Just inside the trees as we wandered through a scowle, Richard said "Look, dad" There, as close as I've been to any in the wild, were two stags and a doe, gazing down from the grassy spoil heap. We drove to the river's edge at Alvington and walked along a narrow path lined with tall nettles and brambles under the railway, emerging on a grass covered slipway before a panorama of the Severn estuary. Spring high tide. An expanse of brown water moving neither way, turgid, slightly sinister. Walking back I picked and savoured rich blackberries and got a tingling sting and a scratch. Then to the small church at Hewelsfield and back to Lydbrook to visit our friend Steven Outram in the converted church that is his studio. For twenty years he's painted the local landscape, defining its appearance as composites - the result of sketches made on long walks. 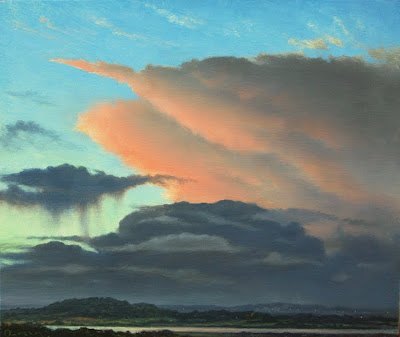 
Simon, I have no further news. In short, I do not have a firm date for completion of the works and I also understand that the land acquisition is not complete. Given those facts, we cannot occupy the land as I had assumed we would have been able to by now. Without specific detail I am not in a position to tell people anything more. However, my view is that we will have to delay opening until 2010 - we have the added problems of losing a key staff member, Gardeners Weekend and the imminent rent period and these have huge implications on our resource. My optimism is therefore evaporating but there is little more I can do except shout. Adrian Stagg, Allotments Finance & Records Officer.

Dear Adrian. Thank you for your swift reply to my query about when plots on the VJA would be becoming available after we had heard rumours of yet further delay. It's clear that within the constraints of officer's neutrality you've been doing your professional best to encourage the development of allotments including the VJA. It's not too strong to say that I and a lot of others will be very disappointed and indignant at not being able to apply for plots on the VJA for yet another year, and indeed will have to continue to worry that our hopes have been frustrated and - given past experience - that this waiting might not even end in 2010. Over a year ago on 20 May 2008, at a site meeting with Alan Orr, our community planning officer, local councillors and other local representative's were told by Mr Orr that the developer, Persimmon Homes, had agreed that the 'trigger' point for proceeding with the contracted terms of the Sections 106 Agreement on the site had arrived. Details of that meeting and an image are here. Basically Alan Orr said that a representative of Charles Church, the developer of the housing on the site, would now be proceeding to implement the terms of the Section 106 Agreement (planning gain agreement) on the site - a legal agreement concluded between Birmingham City Council and the Applicant on 20 May 2004 after their application - N/01514/03/FUL - had been approved by the City's Development Control Committee on the grounds that in return for building on green space next to Handsworth Park, the developer would lay out on the rest of the land, 80 new allotments, a cricket pitch, two soccer pitches, sports pavilion and children's play areas and that these resources would be passed on to the City as soon as an agreed number of the new houses had been sold - the 'trigger' point referred to above. I'm sorry for being repetitive but this is a legal agreement whose terms are not being implemented and in that respect it seems to us that both parties bear responsibility for this continued failure to realise its terms. Yours sincerely, Simon, Handsworth Allotments Information Group (HAIG)

Adrian’s a sober and politically sensitive officer, but we can tell how he feels about this succession of delays and broken promises. I'm writing around, letting people know.

The other disappointment is that our Amy missed - by five seconds - passing the fitness test to transfer from Community Support to the Police. It’s the same test for men as for women; unjust by Olympic standards of physical differences between men and women, but possibly right in terms of doing the same job on the streets. She must wait 12 weeks to take the test again. On this occasion, apparently fairly typical, 8 out of the 9 women candidates failed while 1 out of the 11 men failed.
* * *
Cycling back from campus I met Robin Clarke cycling the other way. He lives high in a city tower block in Ladywood. We stopped in the shade of sycamores by the Vale Bridge for one of our biannual chats about the end of the world. He drew, from his bag, his paper ‘Will there be an abrupt collapse?' We discussed what might collapse, when and how - currencies, credit, commodity markets, especially energy and food, retailing, transport, communications, water supply, government operational systems, trust in government and in legal, social, and informal norms, trust in, and cooperation with, other persons of varying familiarity. Robin suggests potential causes of abrupt collapse: hyperinflation, crossing of balance-sheet thresholds, under-recognised key roles, market failures (short-termism, panic-paralysis), 'unexpected' events in a context of corner-cutting, loss of confidence in various assumptions..."Make sure you're down for an allotment!" I said. Next day he sent me an e-mail and a link:

You'll have heard that not only are France and Germany "recovering" but so is the US. Meanwhile in the real world.....