I still believe the centre holds... 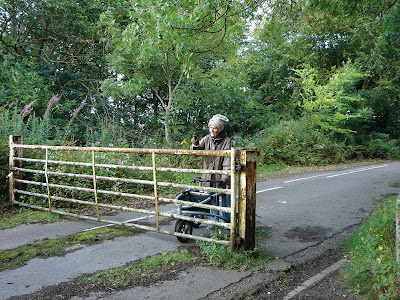 The day before I took the train south from Scotland my mother made it to the iron gate across the old road along which we often stroll near Milton of Culloden. A fortnight earlier she'd been slow and exhausted long before we got there. This time she walked a mile there and back. We enjoyed naming flowers, trees, butterflies and seabirds foraging on the receding tide line. "We've done so many things!" We made a list - of meals at Brin Croft and the house at Croachy, the party organised by Mum's friends Christina and James Murray on the Friday of the Moy Fair at Farr Mains, our walks in Daviot School Woods, the drive to Cromarty, to Coignafearne and along the Culbin Sands at Nairn, my cycle ride via Drynachan to Shenachie and Ruthven beside the Findhorn, walks with the terriers beside the Farnack, and just sitting at Mum's home talking and remembering. Sharon, my mother's carer, has been a vital help and we've all taken a hand in washing up and tidying and other errands. The weather has been kinder than in the south but I like the wet and the dry.
We'd had supper, one evening at Rhuallan at Croachy, with Sandra, my nephew's wife and she told us of a dream she'd had. Grandmothers she knew were talking with one another about each other's lives. They talked about the times through which - in different parts of Europe - they'd lived. As well as mum from England, there was a grandma from Norway; two from Austria. "They spoke of things that had happened during the war," she said. "Things I couldn't have known! They were talking abut how once they'd been strangers to one another, curious about their different perspectives, asking questions about 'how it looked?' They were so animated ... so interested ... reconciling their histories. How could I have dreamed such a conversation about so many things I never knew?"
The journey south through Drumochter on via Edinburgh on Thursday with Oscar seemed to pass quite quickly. By evening we were home in Birmingham, in Handsworth.
* * *
On Saturday Amy and me were cycling together and we dropped off at a Hockley Community Party for some food. Hector let me borrow the mike to announce details of how to apply for the Victoria Jubilee Allotments' short list. Amy's writing our contact details in the guest book. 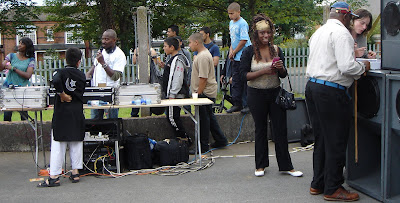 Simon Baddeley has sent you a message.

For the tour I'm doing in Australia in Oct/Nov 09 we will be offering web access to participants both for film and texts.

I've also part of a joint small grants ESRC bid submitted by Jonathan Davies from Warwick Business School which will involve me filming working relations between city council and partner reps in Birmingham - "a multi-method qualitative inquiry to explore the dominant rationale of governing networks in the city of Birmingham. Our outputs will include an original dataset, academic articles, teaching and capacity building tools. " If the bid is accepted this will include publishing in an electronic journal articles combining text and film.

Tony B has sent you a message.

Subject: RE: Making my material accessible

This is fantastic! Great progress and in a short period of time! If I can help in the research project in any way, just let me know. I know Jonathan Davies and he is a bright spark - I'm sure that what you do together will make a big impact.

Meanwhile, I'd like to meet Nick Booth in early September, if you're OK with that. There are a couple of things I'd like to talk about with him. I propose that we also meet together when you get back, but that's likely to be late October? 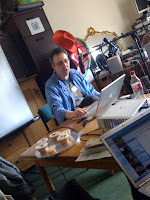 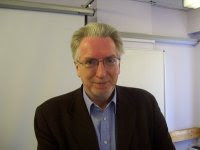 *** ***
It's a sign of the times that I thought a story about a competition to change the names of the towers of Lichfield Cathedral because the existing names 'ladies of the vale' had caused offence. PC - political correctness - is mainly about etiquette in changing times, hence the vexatious whinges of those unable to follow rapidly shifting conventions of the day and the shadenfreude of those who know the latest rules. As any fule kno the famous etiquette guides - the Sophists', about whose well-paid claims to teach wisdom to young Athenians, Socrates was so scathing, Baldassare's Il Cortegiano guide for renaissance gentlemen - l'uomo universale - through to Debrett's and Emily Post and the current plethora of syndicated columns on what to do when facing the latest contemporary dilemma - δίλημμα - are studied in times of great social change, even revolution (e.g. industrial, renaissance, post-war disruption and whatever you call today's global babel) but etiquette (e.g. PC) is all about 'tickets', 'qualifications'. Politeness is another thing altogether, being about never stopping thinking and puzzling abut the right thing to do to be kind to others. Etiquette guides are designed to simplify by linking, in the minds of apirants, a specific response to a specific situation - which knife to use, which greeting, what precedence. The principle is to reduce processing time. Etiquette is the computer equivalent of ROM. Politeness works on RAM. It requires a depthless capacity for deft processing of data - talented sensitivity, wisdom. The conventions some refer to as 'PC' are attempts - often absurd - aimed at helping people be polite - but as any fule kno it's impolite to tell people how to be polite.
** * ** *
Barbara and Lulu meet Cookie on Skype
* * * We've just seen some new panoramas on the excellent Ano Korakiana website (this page) and references to 'Baddeley' and a rough translation. In just a few days we shall be on Democracy Street - Οδός Δημοκρατίας - watching dawn over the mainland. 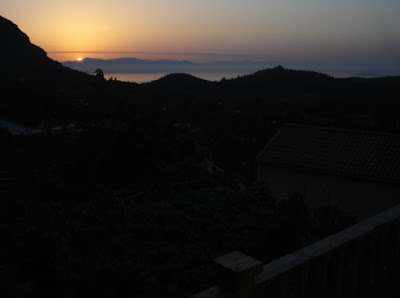