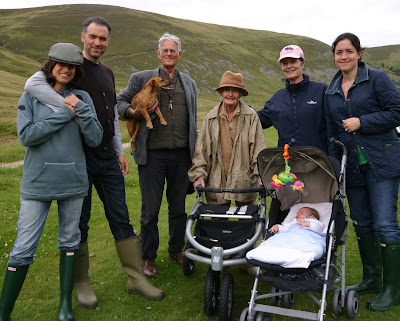 Sandra, Anthony, Simon and Lulu, my mum Barbara, Bay, Raef, Susie
Relatives have been visiting Brin Croft, renting a farmhouse down the Strath at Croachy - my sister, Bay, her daughter, Susie with her husband David, and her son, Anthony with his wife Sandra, now with a son, Raef. We run from 8 weeks to 92 years. 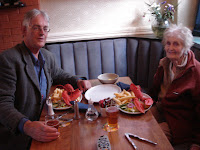 I drove my mother to Cromarty. In the Firth a lobsterman went out to check his pots. We ate his catch at the Cromarty Arms Inn, with chips and local real ale.
On Friday I set off on a roundabout ride to the Field Sports Fair at Moy via Drynachan with Oscar initially in my bicycle but much of the time jogging on the empty roads behind me. The first leg was past Littlemill through the tunnel under the A9 to Daviot War Memorial with lists of people who died long ago so that I could enjoy 67 years of peace, then up past Craggie on the Sustrans route to Inverness until the turn near the Clava Stones and the railway viaduct, where, instead of turning north, 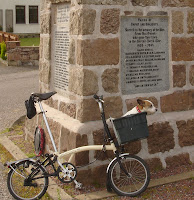 I headed on to Galcantray, Bareven to Little Urchany Farm where I turned south on the single track signed to Dulcie Bridge, turning right where the road forked - Dulcie to the left, Drynachan to the right 4 miles - leaving farmland; cycling through moorland. Email to Lin:

I fell in the Findhorn wading across with my bike at Shenachie. There goes another phone but the chip's OK. Oscar’s had a lovely walk. By the time I got to Moy via Ruthven I was almost dry. Oscar swam both ways across the river, without hesitation, but to dry himself after rolled in a cowpat, covering himself in khaki stripes like Rambo. Luckily he was so hot and thirsty he laid in a puddle and cleaned himself up. Now he’s having a rest. I ache – knees and hips - trudging like an old bloke. Hold on I am an old bloke. Seriously tho’ it was a lovely ride - 30 miles - and I picked wild raspberries by the road, had the whole route almost to ourselves. I saw a red squirrel, several roe deer, buzzards, rabbits, lots of young pheasants, grouse and even partridges and a V of geese passing overhead honking. 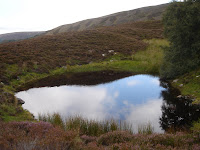 I took the wrong route at one point and climbed too high up a brae and then saw the path below and had to lug the Brompton down several hundred feet through heather, but I discovered in a fold of the mountainside a lochen with a tree overhanging surrounded by moss and granite, which I’d never have found if I’d followed the proper route. I stopped there (well covered in midge repellent) and had my picnic. Utter quiet.

At Moy on Saturday Oscar actually raced to the end (terrier racing from 2.22 on this 2007 YouTube) of the arena instead of peeling off from chasing after a stuffed black sock for a chat with another dog.

We went together to picnic at Coignafearn for the afternoon, driving over the Garbol Road from Strathnairn. My niece's husband David Roskelly took pictures. I sent one to Lin in Birmingham. She thought it made me look scruffy - especially the stains on my waistcoat from that Arbroath Smokie I enjoyed at Moy. 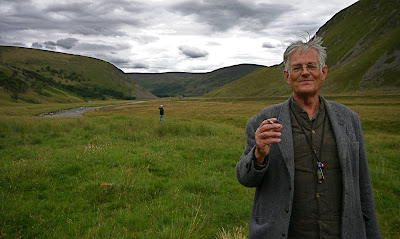 A herd of red deer grazing along the ridge above us, two sets of antlers silhouetted against the sky and the terriers far behind set a hare running along the track beside us.

By phone Lin and I discussed news of police in Birmingham F1 facing brawls between separate demonstrations on Saturday. Twitter, Facebook, YouTube, and the blogosphere have carried many narratives instead of just 'the News'. Hurry Up Harry, and so on. Amy said she'd never felt in danger. "Dad! there were 400 riot police." One twitterer had called for policemen’s heads on sticks, recalling Broadwater Farm. I told him off. He asked me a favour.

I have a bitchin' Ph.D proposal (more in the field of Law or criminology) but whenever I send it to Universities (yes I've toned down the anti-Popo rhetoric) they are initially "right-on" but go cold. Where am I going wrong? Or is it truly a police state?

Wait a mo you were just threatening to have my daughter's head on a stick and now you want me to vet your PhD proposal. We haven't even had a first date yet...If you want me to have a look at it send via Google docs (give me a URL) or get my contact details from my blog. I don't do supervision but I might have a go at answering your question "is it you or the system?' and I might be able to point you to individuals. First give my child a break...

Thanks. I could probably suss out who would be interested at Birmingham (if anyone). Alright how about "Kill all plod - except Sibadds kid"?

I’ve doubts about reports of an 'organised and peaceful march' being disrupted unless you think of an Orange walk up the Garvaghy Road. The ‘casuals’, whose presence as the ‘organisers’ and participants are famously natural successors to the notorious Birmingham Zulus plus text messaging. As for the Muslim youth who turned up to mingle with an Anti-Fascist counter-demo. Well yes. There are plenty of young men. to be ganged up to defend the ummah by the same twittering, supported by people who see all in blue uniform as class enemies, and even those like me who wonder why candidates for membership of the white master-race look so unqualified; a Saturday brawl to interrupt shopping in recession hit malls, but, to those participating, a skirmish on one another's front lines. With a part of my family part Jewish - the ones in the Highlands now - it doesn't add to my capacity to be objective about anti-semitic chat from confused souls, who tie themselves in knots supporting Israel against Arabs. 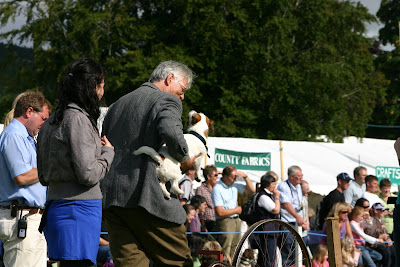 Congratulating Oscar at Moy
* * *
Meantime Harry Tsoukalas draws my attention to the continuing mess near the village of Temploni in the centre of Corfu. A clip from AftonomosTV - (2016 - now disappeared) an independent Corfu podcasting channel riding on YouTube - shows what looks like illegal attempts to destroy forest north of the tip. It looks as if the authorities were alerted...but to what effect?  Even with this news, it's good to hear Greek spoken and catch a glimpse of the island. We'll be there soon.
Posted by sibadd