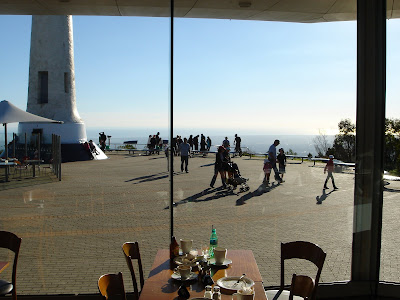 Jack said to me long ago “when you visit a new land, be an unashamed tourist”. I’m sponging up places and thoughts. On Sunday John M drove us up the Adelaide Hills via tunnels named after the artist Hans Heysen, turning off the Crafers Freeway to Melbourne to view the vast panorama of the city and St.Vincents Gulf from Mount Lofty summit – spied by Matthew Flinders from his 340 ton sailing ship Investigator in 1802, as he circumnavigated the continent - giving it the name Terra Australis. Flinders sailed for home in 1803 - his survey done, but about 100 miles south-west of the Great Barrier Reef, off the coast of Queensland, two ships, Porpoise and Cato, one carrying Flinders, were wrecked with most of the crew from the Investigator. Flinders sailed 700 miles to Port Jackson (Sydney Harbour) in his ship's cutter - renamed HMS Hope - with 13 others to get help. The survivors managed to salvage food and water for three months - long enough for Flinders to rescue them.
Last night I looked up from a stroll down Hindley Street and spied above us the Southern Cross – the constellation on Australia’s national flag.

The pleasure of sharing ideas and debating with another academic is unalloyed. We’ve discussed the economy of the world, the fate of the species, social security, public health and transport, history, biography, our journeys, our families and our decisions, our disasters, worries, crises, joys and successes – strolling, travelling, eating, drinking and teaching together. We have three workshops under our belts – all with more than satisfactory evaluations from those attending, and there’s a third and last to come in Perth. My mind is working delightfully collecting ideas in conversation with John and the people we teach. 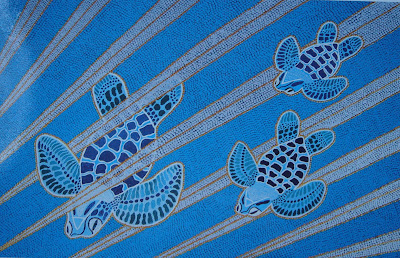 I’ve seen pictures of such beauty - this one of turtles by Jan Leon, she calls 'Reaching for above' - Tobwabba art. I viewed a limpid southern ocean lapping the shores of a terra now thoroughly cognita - though not to me. At Norton Summit, John showed me the bronze statue of an archetypal Australian – 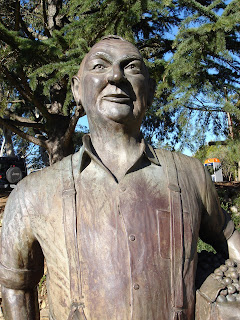 Sir Thomas Playford, South Australian premier from 1938 to 1965 and farmer - widely know as 'honest Tom' for his integrity in private and public life.
* * *
In this part of the country corrugated iron is treated as a heritage material, part of the Australian landscape, and the character of place - to be used and if possible conserved. It makes me look at this roof beneath my Holiday Inn window in central Adelaide in a wholly different 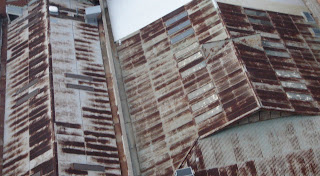 
'If you are an Australian, a 'Baby Boomer', grew up just about anywhere outside a large city, or even in one, or lived on 'the land', or worked in a 'shed', or in factory of some kind, the chances are that just about every roof that you've ever lived or worked under would have been corrugated iron. The water you drank as kid more than likely would have been collected on your roof and indeed you may well have been conceived under the the stuff. And, if you're were brought up as a Protestant Non-conformist there's a better than even chance that you've done some praying under corrugated iron ­ and just maybe you were married under it too. To just such an 'Aussie' the very idea that this stuff was invented in England is almost unbelievable. It's said that corrugated iron is "about as Australian as eucalyptus oil." Well, that's what they say! And, if they do, "it couldn't really be English ­ could it?" Antipodean disbelief might have something to do with Australia exporting corrugated iron to the UK from about WW2 on and it might also have something to do with the fact that corrugated iron is an omnipresent element in the landscapes of "home". Even if it's virtually invisible to unseeking eyes, corrugated iron gives Aussie places a vernacular placedness and that's an idea that's deeply embedded in the imagination of a great many Australians

....similarly, tho' not made in England, the surface of the ubiquitous gum tree - the eucalyptus 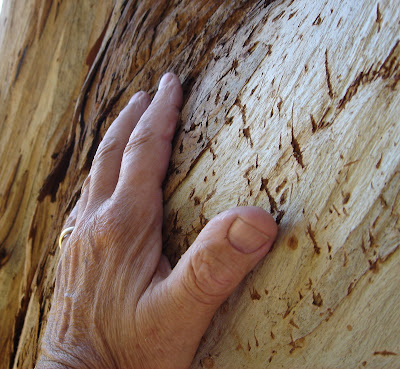 I'm getting some good reading from Australian newspapers, thus, a piece by Henry Ergas called 'Kevin 24-7 or 7-11' in The Australian draws on international references to explore the tension between evidence-based policy (something for which I have a firm but conditional liking) driven by bureaucrats and policy wonks seeking to be rational researchers and policy-based evidence relied upon by political leaders under pressure, in connection with the PM's current difficulties over his FuelWatch Scheme:

If Australian public policy formulation is rarely a dignified process, the FuelWatch debate has plumbed new depths. Australian Competition and Consumer Commission chairman Graeme Samuel emerged as the white knight for the Government from which he is seeking reappointment, brandishing an econometric study that claimed to find support for the scheme. Seizing on the ACCC's support, Kevin Rudd - self-proclaimed economic conservative and champion of deregulation - resurfaced as the crudest of populists, casting the issue as a titanic battle against big oil. A bemused public would have been forgiven for thinking that never had so much been made of so little. This is all the more the case as it is a mystery worthy of the finest detective writers, if not a fitting subject for psychiatric investigation, that the ACCC study could have been given any weight, much less made the foundation on which one of Australia's largest industries would be subjected to costly, intrusive and internationally unprecedented regulation. In effect, the ACCC released virtually nothing: not the specifications it had used, nor the tests of statistical significance that routinely serve to assess the robustness of the results. Additionally and importantly, it refused to disclose the underlying data, making it impossible for others - including the Opposition - to actually assess the ACCC's approach, examine whether its claimed results could be replicated and test whether other explanations of the trends in that data might prove superior. That such scant information, selectively disclosed, would provide the basis for a massive expansion in regulation beggars the imagination. (continues)

It feels like Lord Butler's Review of WMD rewritten as farce - except that the hi-politics of energy, in this case petrol, are so serious.

On our last morning in Adelaide we went to a bookshop and I browsed the history books for young children. What contested stories do children get about their country? Like ours the books I saw were eclectic and ranging sets of notes interspersed with cartoon illustrations for discussion with the class - workbooks that cover the possibility of contested narratives about what it means to come from Australia or to be Australian. For grown-ups I was pointed - for starters - to Geoffrey Blainey's a shorter history of australia (the lower case fonts are his or his publisher's) - a scholar who's a contender in the predictable and welcome 'history wars' of the times. 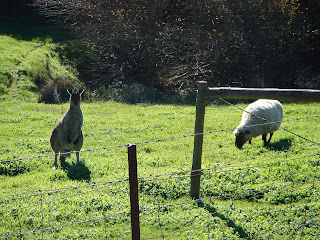 Earlier in the week John stopped by a back road from Bendigo to show me my 'first' kangaroo. So now I've two more Australian icons - which, as Lin observed - not wholly originally - if they became a number, would produce a woolly jumper. The WiFi connection in the Virgin Club Lounge at Adelaide Airport is reluctant to let me Google this - especially the conception of a kangasheep.
Posted by sibadd