A death in Corfu as Greece struggles to reduce its trash 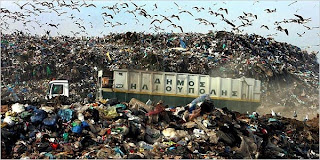 ATHENS: Greece is struggling to manage a colossal garbage problem as recycling fails to take off and landfills fill up and expand, posing serious health and safety risks. The problem is acute in the countryside, which, like the Campania region of southern Italy, is dotted with hundreds of makeshift landfills. The product of local residents and companies dumping their trash with impunity for years, these pollution hot spots are a major fire hazard. Of the blazes that killed more than 80 people in Greece last summer, several are believed to have started on illegal landfills by local people burning their trash or by methane explosions. In recent weeks, fires have broken out in dumps in the southern Peloponnese, the peninsula where the blazes last year wreaked their worst devastation. Now, as temperatures rise, a frenzied cleanup effort is under way. The authorities have another incentive for this sudden scramble: they face millions of euros in fines from the European Commission if they fail to close down all illegal landfills by the end of the year. Eradicating between 800 and 3,000 makeshift dumps - there is no official number - is impossible, according to Athanassios Nakos, the deputy minister of the interior and the head of a committee appointed to clean up the trash-strewn provinces. But the current sweep should leave only 500 sites by December, he said. Ecologists say that the number of makeshift landfills is indeed dwindling but that many of those that remain are larger, fueling suspicion that smaller dumps are being unified into a smaller number of bigger ones. "If this is happening, then local authorities really are lamentable," said Philippos Kyrkitsos, president of the Ecological Recycling Society or Ecorec, a nongovernment organization. "The existence of uncontrolled landfills is a megaton-bomb for the environment, quality of life and the economy - a bomb we are determined to deactivate," he said. But it is not just illegal landfills that are a liability. A fire in May at the capital's official landfill has raised questions about security at the 100-hectare, or 250-acre, site. "Accidents are inevitable at such a disorganized site," said Nikos Charalambides, national director of Greenpeace, speaking of the trash mountain that looms 160 meters, or 520 feet, high in the northwest part of the city. The Athens landfill served the capital's population of five million - and the 6,500 tons of trash it produced daily - for two decades until early last year, when it reached saturation and trash began to swamp the city streets, as is happening now in Naples. The authorities say a new landfill will open this month. Meanwhile, garbage is accumulating around the saturated landfill. "What can we do? Refuse to take the trash in? There's nowhere else for it to go," said Constantinos Mnimatidis , manager of the site. According to the EU environment commissioner, Stavros Dimas, who is Greek, the root of the problem is a short-sighted policy of dumping garbage rather than recycling it. "Extending existing landfills or setting up new ones is proof of inefficient waste management," Dimas said. But the government says Athens needs at least two more landfills to accommodate its trash. It has chosen sites on the eastern outskirts of the city, but court challenges by residents have blocked the project. There has been resistance elsewhere as well. 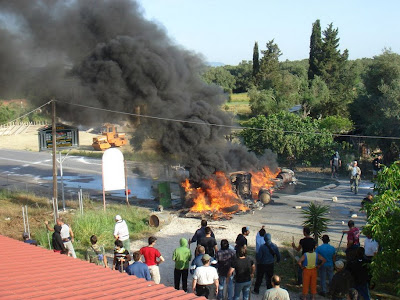 On the Ionian island of Corfu, the police have clashed with residents opposing the creation of a landfill in the south of the island. A commission official visiting Athens in April said there was no time to lose. "If you don't want to find yourselves in the same position as Naples you must take action," said Jacques Poncet, a senior regional policy official. But new landfills will not solve the problem without more recycling. Claims by the environment minister, Giorgos Souflias, that "recycling of household trash has increased four-fold" are dismissed by ecologists as wishful thinking. According to the European Environment Agency, an EU body, Greece ranks last for recycling performance among the 15 states that were members of the bloc before its expansion in 2004. Eurostat figures show that Greece recycled just 13 percent of its waste in 2006, compared with an EU average of 41 percent. Nobody takes responsibility for this laggard rate. Souflias says recycling is the job of the local authorities. Last week, he offered them an incentive: an €8 million, or $12.5 million, project to triple recycling rates to 200,000 tons a year by 2011.
* * *
On June 12 the Irish voted against The Lisbon Treaty. I wonder how much people understood what they might have been voting against or for. It's always been confusing seeing the good and the bad of European Union, but I think the 'no' vote is unfortunate. It may be part of how people learn about big messy confusing strategic direction across this vague place called Europe. Rather a helpful article here in a later Kathimerini 18 July 2008 and Wikipedia is instructive with many links, to including one that takes me to a report on levels of confusions, certainties and doubt among referendum voters:

The “no” voters were also presented with a list of the potential reasons for their decision, the responses were diverse and numerous – going from a lack of information about the treaty to, for example, a way of protesting against the government’s policies. A lack of information about “Lisbon” was the main reason for voting against the treaty (22% of all answers), followed by the desire to protect Irish identity (12% of all answers). Besides these two main rationales, “no” voters gave a number of other explanations – that together led to a multitude of reasons – these included a lack of trust in politicians in general; a wish to safeguard Irish neutrality in security and defence matters; the desire to keep an Irish Commissioner in every Commission; the need to protect the Irish tax system (in each case, 6% of all answers) as well as interpreting their vote as a vote against a “unified Europe” (5% of all answers).