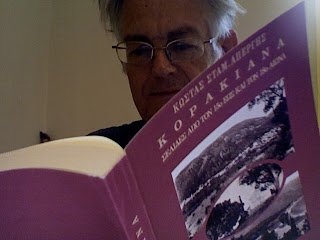 The book ΚΟΡΑΚΙΑΝΑ: ΣΕΛΙΔΕΣ ΑΠΟ ΤΟΝ 15ο ΕΩΣ ΚΑΙ ΤΟΝ 18ο ΑΙΩΝΑ by ΚΩΣΤΑΣ ΣΤΑΜ.ΑΠΕΡΓΗΣ, printed in ΚΕΡΚΥΡΑ 2007, ISBN 978-960-930284-5. Thannassis and Katia Spiggos - I think 'Spingos' may be the spelling in Latin - came to tea on Sunday and brought with them, Kostas Apergis, who presented us with a copy of his history of the village in its widest boundaries – reaching towards the coast above Ipsos and marked, as Kostas pointed out from our balcony, Agios Ilia - Αγίο Ηλία - the tree surrounded church on the hill just south of due east from our balcony - over 400 years between about 1400 and 1799. Inside the cover he wrote us a dedication. 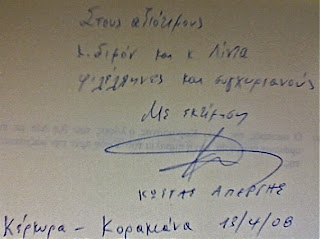 The book is in Greek so I will need help going through it – but our guests agreed to my request for a walk through Ano Korakiana with them before the first week of May.
We also discussed the abandonment of the Protectorate and my continued failure to discover the paper requesting the British to stay that had come from some citizens of Korakiana. We speculated about this. I learned that the fine house next to the museum had been built on the proceeds of bread sold to the British Garrison by one of the Metallinos. I promised a visit to Kew where I’d follow Eleni Calligas’ advice on which reports in the Public Record Office to sift. We pondered other lines of investigation. “Meanwhile I’m learning a lot of Corfu’s 19th century history!” I said. [Memo: I was reminded to learn more about George Theotokis]

I asked about the origin of the name 'Democracy Street'. The junta in the late 1960s had decreed patriotic street names – especially main streets called after the date of the colonel’s coup, ‘21 April 1967’. By way of showing the community’s respect for the dictatorship Ano Korakiana named its main street ‘Οδός Δημοκρατίας’.
* * *
Earlier in the afternoon we’d come home from the sale at Kontokali – with books, a small vacuum cleaner, shirts and DVDs – to find two goose eggs left outside for us, so we knew we’d missed Mark and Sally.
* * *
Small things. The initials MKM 1951 are scratched into the wood beside the downstairs bedroom door , Kostas said this was Marcos Cosmas Martzoukos 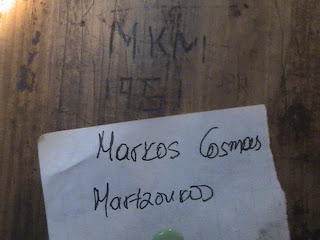 who lived here, and still lives in the village. I’ve put a plastic sheet over a downstairs window frame so that I can take the windows, - cracked in winter when I closed them - to the glazier. Is there a special place in hell for people who, having installed a wooden window frame, fail to follow the sequence – clean with white spirit, apply primer, sand, undercoat, sand, undercoat again, sand, then final coat of gloss? “Yuk you’ve forgotten to put a pill in my coffee!” “Yuk, I put it in my tea”. Small crescent winged missiles swoop up and down the streets – close enough to see their cerise head feathers - dashing between the houses of the village, frolicking among the trees. The eagles, coasting dots, circle the wooded margins of the cliffs behind us. This morning – Tuesday 15th April – the sun was out, disappearing now and then behind clouds. We sat on the balcony with Jill overlooking the village, the green island, the glistening sea in the channel, and the hazy mainland having tea and coffee and biscuits. Leftheris worked in his garden below chatting with his opposite neighbour. I signalled my gratitude to him for introducing us to Kostas and Thannassis. I phoned D, who’s been storing them over the winter, to collect ‘Summer Song’s’ sails. “Some sewing needs doing on the sacrificial strip on the jib” he said “but it can wait a bit, if you want to use it now.” I note that the new rain grid on Theotoki Street through which my Brompton front wheel passed last year causing me to come a cropper, has been replaced by one with closer bars. V.efficient.
* * *
On Monday evening we were at the airport to meet our friend Jill. Haven’t met a plane for so long. It was exciting, because arrivals are not so frequent at Corfu in April. It seemed like an event from the distant lights descending, to the shiny white tube letting a motley crowd onto the apron amid guiding ground staff, with us, in company with others craning to make out our special arrival. Then she was here and waiting for her bag off the carousel. Hugs and kisses and heading north for the village – our first guest, and Lin had only finished painting an hour before. 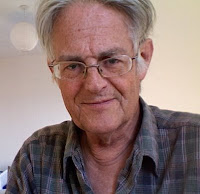 So Tuesday our holiday in Corfu began with lots of sitting around, first on the balcony gazing at the panorama, cool when the sun went behind a small cloud then bathing in April warmth again. In the late afternoon, after shopping to get in supplies including wine, we went for a walk through the village, dropping in, at last, on Mark, who was already preparing, unknown to us until he told us, a supper for Thursday evening. Sally arrived busy from her stables. We exchanged happy apologies for not getting together earlier. We walked on eastward and identified Katia’s home for later, and then we were on a long narrow winding road lines with grass and wildflowers fringing olives – venerable trees on old terraces receding upwards to the darkness beneath the crags above and downwards into undergrowth. The wind rustled around breaking the enveloping quiet. Now and then a gap would show the wider landscape, turning delicately pink. “I’m ever so slightly outside my comfort zone” said Jill. “What do you mean exactly?” “It’s so…so foreign” “I think I know what you mean. It’s like England – green and damp with lots of flowers and yet it’s all slightly different.” 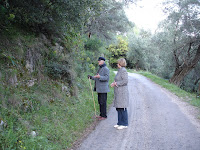 I told her Maria’s story from long ago about panic on a country path in Aegina, and how she detested an etesian wind in the trees refusing to use the word meltemi. We road wandered on and on down to the lower ground until we came, hearing traffic, to the main road to Sidari, from which within yards another road led back to the village. In the descending dusk, hearing the placeless call of a scops owl, (“Where’s that coming from?” Lin and Jill pointed instantly in exactly opposite directions) headed up hill again between hedgerows and separated villas, some semi-completed, until we were back on the lower road of the village, and turning up the winding steep path by our bus stop and coming out beside 208. I lit the stove. We had supper upstairs and talked late – on the subject of compassion great enough to encompass human depravity.
* * *
And now the floor! 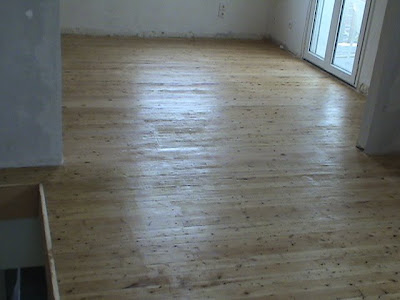 'Producers toy with scarcity, allowing fuel prices to soar while the earth edges closer to catastrophe ... Our conclusion is that, if humanity wishes to preserve a planet similar to the one on which civilization developed and to which life on Earth is adapted, CO2 must be reduced from its present 385 ppm (parts per million) to, at most, 350 ppm.' Jim Hansen, Yale Global, 16 April 2008