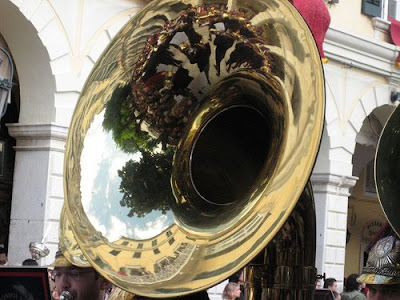 Easter week's started and there’s municipal tidying of verges – roadmen laying tar on parts of Democracy Street, men on scooters bearing their strimmers like crusader’s swords across their backs, sweepers doing housework in the village. There’s whitewashing and deweeding of public walls; extra discardings beside the refuse bins; more people gathering in the village and children on school holiday playing most of the day under the watch of their grandparents. By the sea at Ipsos and Pirgi and on towards the town, families are doing preparatory housework on seasonal tavernas and bars. Few tourists yet, but those whose business they are, are getting things ready for the start of the working summer. Smoke from fires, forbidden after April 30, rises from bonfires of cut shrubbery and grass. There’s the urgent buzz of bees. “I bet they’re making good honey” says Lin. The same variegated and delightful aromas, attracting them to their work, waft by our enfeebled noses from verges and green meadows where olives and cypresses mingle and amid the rushes, reeds and grasses wildflowers, white, yellow and blue, proliferate and orange tips, brimstones and red admirals flutter by, settling so that, for a few seconds, my human eye with no other motive than the enjoyment of the exquisite can gaze on their delicacy. There’s news at last from D - he's made it with his family to Jordan. Now his problem revolves round paperwork.
* * *
On Sunday we’d promised to take Aln and H out to Agni on ‘Summer Song’, me having spent the previous day sorting out sails and, especially, helping D, my Ipsos mentor, clear the foresail halyard and mast top pulley block. He lay on his back on the mole with binoculars peering up to make out what was going up there, returning with a new idea and a helpful aerosol spray that lubricated the groove up which the sail has to be hauled. All done by Saturday noon, but on Sunday with picnic and guests aboard we’d hardly motored a mile from the harbour on the almost windless sea when the engine stopped, smelly smoke swirling from an unknown pipe joint. We turned and ghosted goose winged (Aln acting as a spar) back to Ipsos where D was waiting alerted by mobile, ready with a line to throw as I sailed in. I drifted into our berth without engine - some consolation for our shortened trip. and we went by road to Agni where all the tavernas were still closed, getting ready. H took us by a grassy track, 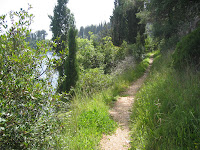 burgeoning greenery almost hiding trapped heaps of cans and plastic bottles beside the path, to the neighbouring beach where on smooth sandstone rocks lapped by clear water we sat and enjoyed our snacks – olives, wine, nuts and oranges. 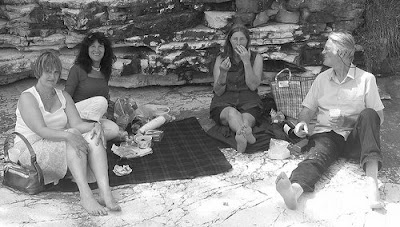 D texted me to say ‘Summer Song’s’ engine started fine from cold, that there was a problem he’d fix with the heat exchanger. Returning to our cars we drove to the north coast beyond Kassiopi to where the road turned south up Pantokrator and came to the site of Old Perithia. The village, remote for safety from invaders, became unsustainable long ago and a new village closer to the sea was created. Now four tavernas make a living from visitors to the gently collapsing houses, which are on sale to anyone prepared to restore them. In some new way in a cradle of gentle ravines below the ridges of Pantokrator the old village is being enlivened by successive temporary inhabitants. We selected one taverna and ordered mezes – horta, a small casserole, village sausage with lemon, roast feta, chips, - as well as cold drinks – lager, water, ginger beer. We lingered. “It’s a hard life!” said H. I felt pleasantly sleepy on the ride home.
* * * 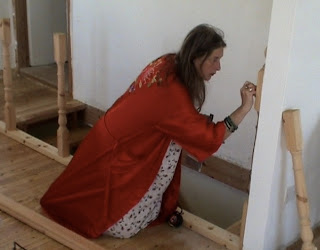 In the house we’ve started to install a banister. A long coach bolt through a floor beam will hold the newel post after we’ve cut a square in the floor boards so that it sits firmly on a sturdy base. 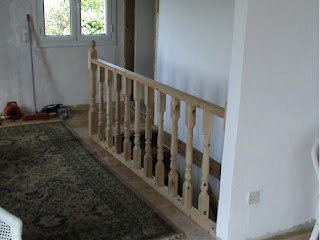 An ironmongers by the old port found me the right drills and bolt. The turned wood we need was bought months ago but we needed the confidence to believe we could do the joinery ourselves. Since installing the new floorboards that’s happened.
* * *
Last week Jill and Lin and me had supper at M & S’s home. A roast of chicken, teal, and quail – all boned one inside the other – along with small tasty unskinned baked potatoes mingled with garlic and a few hot peppers and wild asparagus mixed with fresh peas. We ate and talked and talked and ate. Homer had these breaks in narrative to describe, in tantalising detail, the preparation of similar meals and libations– either for delectation or as presents to deities. How these recitations must have watered people’s palates as over the centuries they were repeated to guests. How they, when not listening to the storyteller, must, like us, have gossiped and philosophised – in our case about the village, the island, about ourselves and our neighbours. “That was a very nice evening” said Jill as we strolled home along Democracy Street. Later I think she said “So why do humans fight?”
Posted by sibadd