What was burned is alive 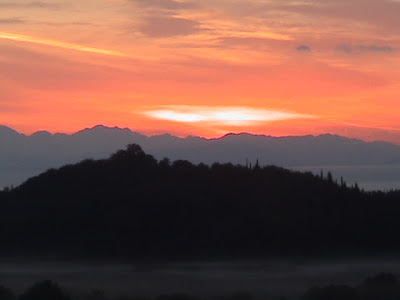 I am in Corfu, in Ano Korakiana. When I woke on the first day I watched the sun rise from the balcony at 208. Then I had a cup of tea. I went to the bottom of the garden and saw that the charred tree behind the house is already, in winter, sprouting shoots. The lemon and orange trees are heavy with fruit. Charred ground is covered in green. 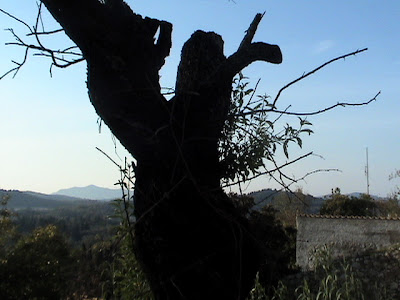 I exchanged greetings with the neighbours. Bought bread and butter at the shop. It didn't seem to matter that our roof is in a mess; that the airline has lost one of my bags in Athens. I feel it will come right.
I went down to the harbour at Ipsos to check Summer Song was secure. John, when I dropped in for a tea and an egg and bacon sandwich at Ipsos, said he'd driven, with the money CJ's had collected for the Greek Fire Disaster, to the village of Kakovatos on the middle of the west coast of the Peloponnese where it had been used to buy animal feed.
* * *

Nov 22: Dear Lin. Flights were uncomplicated and uncrowded. Had 3 seats to myself on both legs and arrived in Corfu at 0625 in darkness. Carousel delivers only one of the cases. Eleni in lost property says it’s in Athens and. of course, it's the heavy one missing. Maybe it looked suspicious under the X-rays. I must phone first thing tomorrow for the morning flight from Athens. She’s confident it’ll turn up. Meanwhile the quilt is on the bed. I couldn’t find the car for 30 minutes then found the ‘Mr Simon’ sign in a larger white saloon near the lake. No wonder I missed it. By then it was a perfect pink misty dawn with promise of the sun we’ve had for most of the rest of the day.
Leftheris and Lulu send their love. They were so welcoming. The new bedroom is pristine. No water has got under the stable door – whose bottom half tho' is v.sticky as you’d guess. Kitchen is fine, as is dining room. So it’s all entirely liveable and lovable as ever and Bubble is roaming outside being fed by the Leftheris who've looked nicely after our plants. Aln came up swiftly at 1130 and we spent the next two hours inspecting and talking. The long and the short of it is that even what tiny bit of electrics X has done is dangerous and I can see why. Aln said ‘I’ll do it’. We perched on the roof and surveyed.

There’s not a lot to add to what we’ve already learned from the exchange of photos, just a growing general impression that except for Z's electrical work, and his and Y's plastering, our first gang of 'builders' didn't have much idea about building whether its’ about plakering, roofing or putting in windows. Aln kept apologising for bearing bad news but I kept thinking that the best work get’s done on 208 Democracy Street when you and I are there, doing it ourselves or supervising someone else doing what we can’t do. ‘Roofing shouldn’t be done at this time of year’ said Aln pointing out a multitude of familiar problems.

D & M have made the new roof waterproof, D, having cut off the beam ends (since Aln visited while we were in Birmingham) and hung a skirt of waterproof lining over that edge and under the tiles. There are no leaks we can see in our bedroom or the spare room. But as you know the seals at either end, tho’ OK for the moment, will need replacing properly. You know this already.

I had a comfortable catch up snooze this afternoon and did some local gov work for my return sitting up in a bedroom warmed by hot water bottle and the electric radiator D has put upstairs and which is being used to dry sheets. A cat messed my cycle pannier and a corner of the top sitting room. I’ve cleaned and disinfected. The SIM card works fine and I’ve spoken to D to arrange a meeting tomorrow or Friday. He sounds his usual laid back self.

I saw John at CJs for an egg and bacon butty, he said ‘Hi’ as though I’d not been away and sends his version of love to you ‘So Lin’s let you off on your own for a while then? (:))’ Aln has spoken to P re a Greek builder who works for him. He speaks no English but he will send him up to look over the house, the roof in particular, with L who’ll translate. It could be a useful back-up.

I think more and more that we should be here when any work is done. We learn. We negotiate. We inspect. We can arrange payment. I think we should gulp and say hold everything. The quality of work done by the September gang means we need to learn and shift our attitude to improvements and repairs on this place. I love it but its been messed with by amateurs. Take that window. I was so pleased to see the view again I didn’t think to note how incredibly shabby is its installation. I don’t need to go into the details. You know. I have nonetheless been using my camera and have a few choice shots and quotes from Aln for you to savour. The electrics in the sitting room can wait and we can look for a proper plasterer to finish that room and repair the unevenness of that arch ‘What did they think they were doing?’ says A. Then comes the floor and the flue.
These things will just have to wait. The roof is leaking but not seriously. There’s dampness near the front opposite the balcony. Aln says there's a ‘soft spot’ in the roof but it's something easily braced – almost certainly not serious given the weight the old roof has been happily supporting.

I’ve phoned X and he is going to do the cupboards in the kitchen before I leave. I think that’s enough to be going along with. I’ll check the electricity bill tomorrow. They were closed by the time I finished with A and there was no bill at the shop, tho’ they are due every 2 months. Hope things are still standing in Handsworth. S XXXX (and to our children)

Nov 24: Dear L. The bag was waiting for me this morning at the airport. I've paid Kostas for the car and visited the electrical place. The bill estimate was €110 and I was advised to pay another €70 to cover us until the next bill. They had no idea why we'd not got a bill yet. I'm glad it's paid and I have a receipt and I have figured out the complicated route to get to where you pay.
X is doing the cupboards on Monday. Any other jobs I should suggest? Like fixing the balcony tighter? Putting in a shelf somewhere else? Putting up some hooks? Making me a boiled egg and soldiers?...
The old roof has been stripped to the waterproof paper leaving a margin of mortar round the edge which is why damp has got in the sitting room. Aln reckons its v.mild damp and that the roof will be OK until Spring. I'm saying this so that I can feel OK telling D & M not to do more work - except the last strip by the guttering - unless we're there.
Aln pointed out that Y had put staples through the waterproof paper to hold it on - an absolute 'no no' encouraging leaks once the water's found its way through. A did say ellenike could be OK but that you still need a roofer who knows how to put it on and how to place different shaped thigh tiles so that it looks nice.

The garden isn't yet overgrown but no doubt will be by Spring the way Greek vegetation flourishes. Your rockery looks solid and green. This morning mist lay below me and far across the island. Beautiful to view but I'm glad we're above it. I will cuddle Bubble. I think she's pregnant. 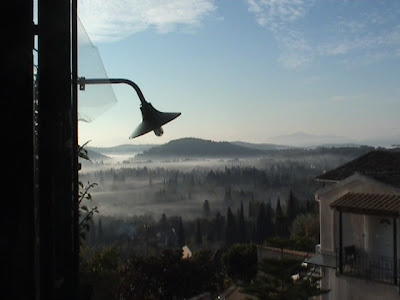 Kostas and I were chatting in general terms over 'problems'. He spread his arms and looked at me compassionately. 'Because you are a normal good English person, everybody tries to be a bastard! Not for profit - just friendly - you know'. In a nutshell. 'You must be firm! Tell them!' The bed was so big without you. I had to kick the hot water bottle this morning. X S