Heading back to England 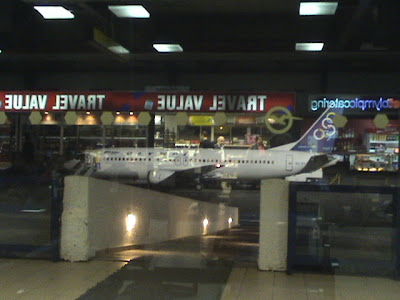 Athens Venezelos Transit: Flew out of Corfu at 0625. On the plane someone next me noticed I was reading Kazantzakis' Christ Recrucified. 'Do you like Kazantzakis?' No! I said I 'much more than "like'''. She said people either loved or hated Kazantzakis. 'You?' I asked. 'I like him very much'. I asked what she thought of his views on women. 'His second wife said he was impotent. That might explain much'. 'Oh' I was bemused. I would have to think about that. Wasn't Job impotent? Why should she say such a thing publicly? I am reminded of my ignorance. I was intrigued by Kazantzakis' views on religion. She said 'He is quite accurate about the church'. Wasn't Kazantzakis, like Tolstoy, driven by man's inability do anything about the misery of human life? In this aren't they in the tradition of the stoics, of men like Zeno, Epictetus, Marcus Aurelius and every creative endeavour in art or politics by men or women to better - I mean 'better' as 'overcome - the human condition? I guess this was not the impotence to which his second wife referred. But in the matter of eloquent shouts against the darkness Kazantzakis forked the lightning and sang the sun in flight. I was in confessional mood, because reading Kazantzakis at the same time as I was leaving dear Greece, I was ready to show more emotion than an Englishman should. D had already commented a few days earlier, after I'd told him the plot of Zorba the Greek, that I liked the tension between the Greek and the Englishman - especially as it was played in the film. 'So you see yourself as Alan Bates?' said D. I said to C, on the plane from Corfu to Athens, that I had reservations when first kissed on both cheeks and embraced by the Greek side of my family '...because we didn't do that. Not when I was young.' I said I'd changed over the years, as had England, reverting to a pre-19th century expressiveness - even in the north. 'I love Greece. However bad things might be, I could never not!' 'Why?' she mouthed. I didn't hear her as we were leaving the plane, standing, reaching for luggage. 'Why?' she asked again. 'I was infected by my father a long time ago. I have no wish to be cured' 'How' she asked 'did your father come to Greece and learn Greek?' I mentioned I thought he might have been in Epirus in 1949, involved somehow in what was happening then. She listened almost too intently - a habit of discretion breached by my curiosity. Lin would say 'Your big mouth!' In-flight to Athens: From the plane window I can see the mountains of northern Peloponnese under dawn mist and a few white clouds. I’ve found a transmission on 102.5 FM3 which I like. A mixture of Greek voices of all kinds and music. Last night, as I drove between Kato and Ano Korakiana, to collect an Indian take-away treat from Brynn for my last evening, there was a talk on sacred choral music. A thoughtful voice commented on extracts from Saint-Saëns, Handel, Mozart and Monteverdi. This morning as I drove south in the dark on empty wet roads to catch my plane home I heard, on the same channel, the news and, amid dawn chaff, some Mendelssohn. I understand a phrase here and there. It's how I understand – or don’t understand – music, but music and uncomprehended Greek were more than agreeable. I want to understand the church here. I'm qualified by ignorance, respect and faithlessness. The ancient tension between Protestantism and Catholicism was still around when I was at school. The Spanish Armada, Bloody Mary, the Inquisition were alive in our histories, quite separate, then, from the troubles in N. Ireland. There were bombs in our cities until ten years ago. Somewhere in all the economic and ethnic interpretation lay the old division that began with Henry VIII’s divorce from Katherine of Aragon. But on the great Schism between the Latin and Byzantine Churches, between the two popes, between Rome and Constantinople, I have no unharboured prejudices to moderate and come innocent to the filioque debate


[8/01/08: This subject scores 116,000 hits on Google and over a thousand revisions in Wikipedia since 2001 - and that's just the English version. When I was studying anthropology at Cambridge - long ago - one of our lecturers told a story about a people in West Africa visited by missionaries from different Christian traditions. The Chief, detecting competition between his guests for new souls, invited them to debate their positions in front of a formal meeting of the elders. Recognising how unfortunate, even ridiculous, would be a public argument of the kind that had divided European Christians for centuries, the missionaries, recovering mutual respect and love, succeeded in solving a problem that still occupies theologians. Both knew the local language well and agreed that the words that described the concepts that divided them were insusceptible to local translation. 'For words are wise men’s counters, they do but reckon by them; but they are the money of fools, that value them by the authority of an Aristotle, a Cicero, or a Thomas, or any other doctor whatsoever, if but a man.' Thomas Hobbes in Leviathan, ch. 4 (1651) I recognise the irony of my reliance on that quote. It was one I learned from my superb history teacher, Charles Keeley, at Westminster and it's been a good friend since, along with many other pearls he shared] [Filioque issue: The Chur

ches were arguing about whether the Son played any part in the origin of the Spirit as one of the persons of the Trinity from the Father, who is the only ultimate source. The Latin word filioque, which means 'and from the son', was gradually inserted by Western churches into the Nicene Creed so that it stated that the Holy Spirit proceeds not from the God the Father alone, as the early Church Fathers believed, but from both God the Father and God the Son. The Eastern wing of the Church believed and believes that the Father alone had given rise to the Holy Spirit, and the idea that both Father and Son had done so was condemned as heretical.]

'When I said goodbye, with a small gift, to the Leftheris, I was invited into their dining room and treated to a skirto, and a tasty quince sweetmeat - kidoni gliko κιδονι - 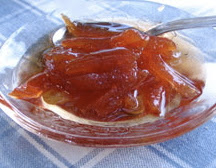 and some figs sweetened and mulled in ouzo. Ten of these were put in a jar, sealed with a ribbon and given me to take home with spiced bread from a name-day service at one of the Ano Korakiana's churches. Was there a church for every name? 'But of course, we have many churches in Korakiana. ' I thought Kiria L was saying this proudly, but checking herself to make it sound like a light apology, lest she create the risk of too many blessings. Or was it that so many churches means much labour? I didn't think it meant division. In Ano Korakiana there are 'many mansions'. As I sat making do with a mix of non-verbals, and sparse Greek and English, Leftheris smiled and said he'd seen his marrow on the internet. I was shown some photos of the grown-ups as children - Vassiliki, Themis (Themistocles) and Katherina. I said I was very happy they were our neighbours. We shook hands gravely and parted. 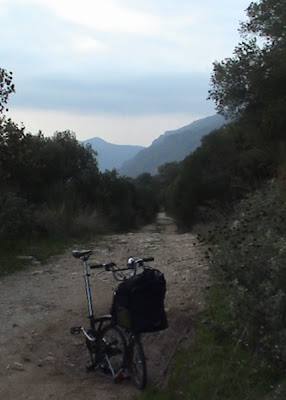 On Saturday of my one week stay, I washed clothes and set out to cycle and walk to Spartillas on the slopes of Pantokrator. At the sixth hairpin bend on the narrow road to Sokraki above Ano Korakiana, there’s a narrower road running sharply off to the left by a house on the corner – the only one that far up the mountain. I cycled for a bit, but the inclines increased and the surfaces deteriorated - grooved by torrents. I went up and up. I passed the two masts with their generator motors rumbling. The vista grew and grew under a mildly cloudy sky, until the track levelled off, the road surface improved and I was cycling again through a plateau of small fenced allotments each with vines. I came, around mid-afternoon, into Spartillas and then enjoyed the longest of freewheels down to the sea through over twenty hairpin bends, stopping occasionally to gaze over the land to the south. 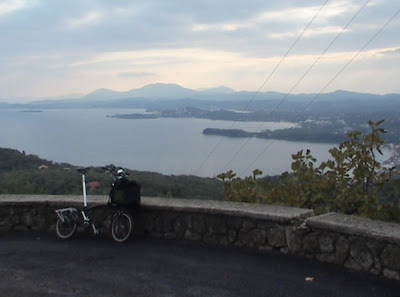 After more work in the cyber cafe including sending a report home to Lin I cycled to From Ipsos, I cycled the twelve or so kilometres to Corfu town, gazing back at the distant heights I'd ascended and descended. In this picture there's a crack in the wall almost certainly caused by one of the earth tremors that occur here fairly regularly. 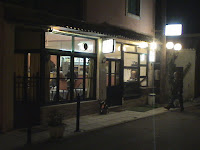 Later I cycled back to Kontokali to meet D and T for a supper at George's - a delicious plate of pork off the grill with chips and a Greek salad, then onto the Navigator’s Bar where, to my quiet delight, the Saturday night karaoke equipment failed and a spatulate fingered bouzouki player, who happened to be there, entertained us instead. D drove me home, with the Brompton in the back.
Posted by sibadd