'For every house is incompleat without him'


cat
Originally uploaded by RichardBadly.
The chilly gusting wind and rain became light snow by Sunday midnight.  I like this picture of Richard and Flea, who keeps the Lord's watch in the night against the adversary. 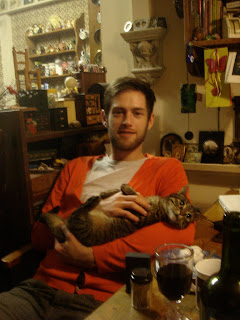 No-one wrote better about a cat than Christopher Smart about Jeoffry.

How fortunate we are to have a cat and dog in the household, especially Flea, who's decided our house is hers and Oscar who is our dog. Flea's not biddable like Oscar, who happily travels with us, and comes to our call. Flea like all cat's I've known relates more to the place and tolerates its fellow inhabitants, while Oscar, lik 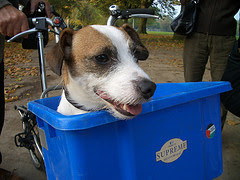 e most dogs, relates generously to people. He will go wherever we go, including riding in my bicycle basket since he was a puppy. When we feed Oscar we feed another member of the family. When we put out food for Flea, it's an offering to a household daemon. Though he can enter smaller places, Oscar moves around in the same dimensions as us. Flea moves up and down too, leaving by the front door, re-entering via the attic, occupying niches tested with whiskers lengthier than Oscar's. He invites stroking. She allows it. Both are delightful to have around.
Posted by sibadd