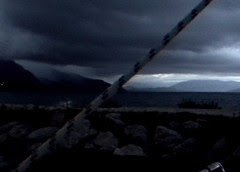 Morning at Ipsos
Originally uploaded by Sibad.
Soon I'll be in Corfu. Here the snow has gone but I expect the weather to be cold on the island and probably overcast on Wednesday. Lin has packed me a hold bag with things for the house including two heaters and an electric blanket. My flight from Heathrow via Athens arrives in Corfu at 0625 Wednesday.

Had lunch with Dh. He's been thinking how to describe the constant sub-dividing of political groups in the local 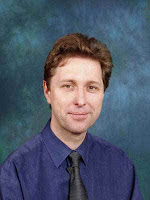 government of Basra, planning ways of ordering his experience over recent years. We sat on bar stools in a student canteen discussing methodologies over jacket potato snacks in polystyrene boxes - indeterminacy, wicked problems, complexity, discourse, utterances and chaos. Back at the School of Public Policy I put my head round Steven Griggs' door and introduced him to Dh. Over coffee Steven described the role of empty signifiers in the formations of the Freedom to Fly coalition versus coalitions to reduce airport expansion. [Back to the future - note the climate action group plane stupid campaign - Feb 2008] 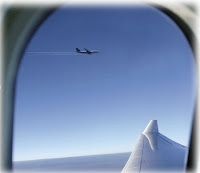 Steven suggesting various readings, seminars and contacts. Daunting language came alive. Can discourse analysis applied to the politics of airport expansion be helpful to Dh? This evening I phoned Dh to check my understanding of Steven's ideas. He e-mailed me some references. I'm anxious. There are things to worry about. I shall miss L in Greece - even if it's only a week. I don't enjoy travelling alone so much. It was as his dear friend was about to set out to cross the uncertain waters of the Channel that Samuel Johnson:

'stood talking for some time about Bishop Berkeley's ingenious sophistry to prove the nonexistence of matter, and that every thing in the universe is merely ideal. I observed that though we are satisfied his doctrine is not true, it is impossible to refute it. I never shall forget the alacrity with which Johnson answered, striking his foot with mighty force against a large stone, till he rebounded from it 'I refute it thus.' James Boswell: Life of Samuel Johnson book 3

Johnson's reasoning is derided by students of logic who dismiss its context and ignore the the possibility this exchange is more about friendship than philosophy. By stubbing his toe 'with mighty force' a man may relieve the sadness of saying goodbye and the severity of his apprehensions about the coming voyage? 'Being in a ship' he'd said 'is being in a jail, with the chance of being drowned.'