It's not that I don't care

I met Rebecca in Coffee Republic, Newhall Street, for a second conversation, recorded on a machine hardly the aize of a thumb. She prompted me to think where and to whom my blood went. I'd been wondering, since our first conversation, why I cared so little. It comes down to the difference between donating and selling. Unless I could see no other way to feed my family - an improbable necessity - I wouldn't sell my blood. Seeing it as a gift, not a commodity, I've no wish to know the receiver of my blood, or to impose knowledge of my identity on them. My blood goes not to individuals but to a commonwealth with which I have a gift relationship. 'It is we who are under threat' On 16 November 2007 there was a conference at the National and Kapodistrian University of Athens on 'environmental management through research and teaching'. This was a multidisciplinary event which would surely have drawn the attention of policy-makers - indeed some of those who spoke are very much part of the policy process already. The knowledge, the evidence and the research skills exist. How do these ideas connect more strongly to political action - at every level, street, village, town, continents and sea? Professor Dimitrios Mavrakis, Director of Energy Policy and Development Centre (KEPA) at the university: 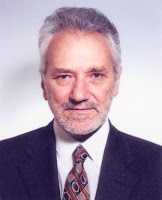 They talk about threats to the environment, but it is we who are under threat...However many forests we burn, the mountains will stay in place, the forests will regenerate but we will have lost a great deal. I have also heard that Greece will face problems in the future due to its lack of environmental protection. Well, I’m sorry, but Greece is already facing problems. If you don’t believe it, the next time you have a salad, think about what water was used to irrigate the lettuce and how many agricultural chemicals are in it. Cancer is rife in the provinces because of those substances.

Professors reported on environment-related research. 'You need a mask to get around downtown at midday,' commented one academic. Anna Karakatsani, associate professor of pneumonology, whose image I can't find but whose research record in her subject is impressive, noted, that the slightest increase in airborne particles is reflected in increased hospital admissions:


Research shows an increase of 10mg/m3 in PM10 leads to a daily mortality increase of 0.6%, and 1% in hospital admissions for respiratory problems.

Associate Professor Polyxeni Nikopoulou-Stamati, head of the health and environment postgraduate programme, with a research record of learning how cancer is caused by the environment:


Water is also subject to pollution. In the past 50 years, we have been deluged with tons of chemical substances. 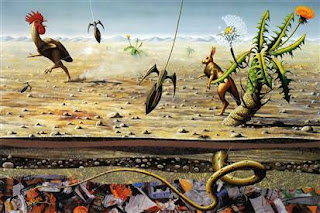 Mavrakis' point that it's we who are at risk is well made. Whether or not you believe in Gaia, the earth has only to shrug 'its' shoulders to precipitate an extinction spasm [video from the National Center for Conservation Science and Policy, Oregon, on feeding science into politics]. A few million years - a geological blink - should allow recovery from the human era, so that in the Neozoic Era, we'll be no more than a stratum of carbon-plastic to be analysed and used for jewellery by intelligences evolved from rats, rabbits and cockroaches. Academic evidence in our 19th century cities showed even the most unaltruistic entrepreneurs that the water born diseases of the urban poor placed them in harm's way unless they promoted ambitious investment in clean water supply and sewerage. Having bought my return flight to Corfu next week, I've been watching United Nati

ons General Secretary Ban Ki-Moon's keynote speech introducing a presentation, by Rajendra Pachauri, Chair of the Intergovernmental Panel on Climate Change, of the panel's latest report, their fourth assessment - Climate change:the physical science basis - in Valencia this morning. Pachauri used terms I need to understand - 'meridional overturning circulation', 'macro-economic costs of mitigation', 'dangerous anthropogenic interference with the climate system' - but his question was clear 'What changes in lifestyles, behaviour patterns and management practices are needed, and by when?' as was the implication of his concluding quote from Mahatma Gandhi.

Be the change you want to see in the world [Note: American in Athens blog wrap-up on the environment in Greece dated 5 Nov 2007 and CORDIS - the Gaias sphere] [Back to the future 12 March 2009: Climate Change Conference in Copenhagen ]
Med threat from 'concrete coasts' ~ BBC June 2005 'About 150 million people also live within 20km of the Mediterranean, and each summer that population almost doubles as swarms of sun-seeking tourists pack the region's hotel rooms. But what they come to enjoy is slowly being destroyed...'
World Wildlife Fund ~ Key Threats to the Mediterranean Region. Brief Report 2005:

...projected tourism activity in the most ecologically important areas in the region will further degrade already developed areas and cause drastic transformations of the coastal and marine ecosystems in untouched areas. Furthermore, by 2020, approximately 350 million tourist arrivals will visit the Mediterranean, representing about 22% of all tourists world-wide. The ten Balkan countries are forecast to receive 79 million tourist in the year 2020 (4.6 % growth rate over period 1995-2020). The leading tourist destinations will be Greece, Turkey, and Croatia. Under the current tourism development patterns, these trends likely imply the degradation and even the outright destruction of most of the still valuable natural and cultural areas of the region.