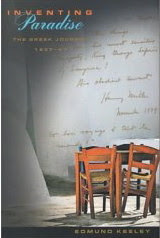 In the post this morning - the spells and potions of mid-20th century Philhellenes. I'll come to Byron later. This is an opportunity to become more familiar with the wonderfully crafted constructions that underlie the creation of Greece as an object of foreign admiration, passion, yearning and joy - not lust or possessiveness like some others - though some Greeks, one talented and very modern Greek polymath - Nikos Dimou - has written of this as a 'misery'. He's qualified that observation since. From the back cover of Professor Keeley's book:


In the looming shadow of an oppressive dictatorship and imminent world war, George Seferis and George Katsimbalis, along with other poets and writers from Greece's fabled Generation of the 1930s, welcomed Henry Miller and Lawrence Durrell to their homeland. Together, as they spent evenings in Athenian tavernas, explored the Peloponnese, swam off island beaches, and considered the meaning of Greek life, freedom and art, they seemed to be inventing paradise. In a lyrical blend of personal memoir, literary criticism, and interpretative storytelling, Edmund Keeley takes readers on a journey into the poetry, friendships and politics of this extraordinary time.

On Byron, British philhellenes get a taste of their own medicine. I saw a game of cricket last September while having coffee on the Liston. The grass was too long. There were too many cars parked round the pitch and I've never enjoyed cricket, but I felt quite proud. Byron sailed to Greece for the last time in 1823 and arrived at Kefalonia on the 4th August. I sailed to Greece from Messina with a friend in July 1962. The first morning of our two day crossing we were bouncing and swaying on a swift etesian reach. A sleek Greek frigate cut smoothly through the cresting waves heading west. In return to our salute she dipped her flag to us. I get a lump even now at that gesture - seeing that lovely ensign falling and rising again in the seconds of her passing as though official Greece was saying "yasus" just to us. Next morning we made Byron's landfall. Shapes - north and south - that appeared and disappeared and might have been no more than dawn shadows - though we knew otherwise - lay before us. All day, in zephyrs, we sailed towards them, passed between, and anchored off Killini where we rowed ashore

to be sat at a table (my memory is flawed by many photos of Greek chairs - see Keeley's cover as typical), offered ouzikis and curiosity, before a polite policeman - reproached by our hosts - "po, po, po" - told us we were supposed to clear customs and immigration at Patras, but "please finish your conversation."
* * *


"What a blog! A cornucopia! I know now I need no books for my vacation ..." Which cat feels like me on reading this?

[Squeak is grooming Bubble, and in the background - village sounds from Ano Korakiana]
** ** **

Back to the future - 25 July 2010: Henry Miller's Colossus of Maroussi reissued.
Posted by sibadd