More wet weather from the west 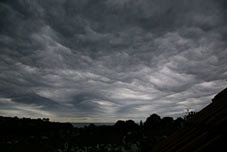 More rain spreading from the west

The sun was shining on Thursday morning. The house painter dropped in first thing. "I thought you were coming on Monday". "Have you seen the forecast? Better do it today."
We hadn't tidied where he needed to go. "I could kill you, Baddeley" said Lin. Showing Dannie the windows that needed repainting I said "My wife's angry with me for you seeing our mess" "Don't think about it" he said "We're Irish. We live like this." Such ingenious politeness almost placated Linda, while I felt complemented at being honorary Irish for not helping with housework.

By evening it was raining again. Then came an hour of thunder and lightning. I unhooked the WiFi until it passed. Rain continued through the night. This morning the surface of the ponds in the garden vibrate. The bird feeders are popular with a family of blue tits fledged from Amy's bird box - seldom fewer that five little birds at a time pecking away at the nuts, seeds and fat balls hanging outside our kitchen window, sheltered by the overhang of a Japanese quince, topped this time of year by the foliage of our venerable wisteria. Well aware that Oscar is across the road a baby rat comes out for the food dropped from the feeders.

Danica in Serbia tells of temperatures above 45 degrees in Belgrade. Our Met Office warns that Birmingham is the likely centre of the heaviest of today's severe weather. On Usenet Forums climate change deniers clamour with instances of past weather peaks to prove that out of the ordinary isn't, and all who disagree are 'commie freaks' and Al Gore supporters speculate on why 'these toads' have crept out from under their stones. I tell my students adversarial debate is part of democracy, quoting Churchill's maxim that 'jaw jaw is better than war war', but I dislike arguers who hurl abuse at each other from behind the hedge of cyberanonymity.
[Back to the future ~ 5 Nov 2008: see Keyboard Warriors on YouTube]

My class on politics includes pondering ways of using wit in the rough and tumble of public arguments, whether canvassing the public or in encounters outside the relative safety of a regulated debating chamber. A discussion last week, arrived at street escapology - getting out of sticky situations on buses, trains, sidewalks and other public places. J recalled how a man with a knife grabbed him from behind and whispered "I'm going take all your money and I'm going to slit your fucking throat". J replied "Why?" turning himself, for an instant, into a question mark. This, we surmised, for J was with us and I'd no cause to doubt his veracity, created a conundrum for his assailant. In the pause for reflection that followed J escaped.

These stories link wit to wisdom. Some last. "Tell us Lord, should we pay tribute money to Caesar?" How did the Naz get out of that one, in the glare of waiting reporters, not to mention those emissaries from the local theocracy seeking to have him arrested - if he said "no" - or discredited - if he said "yes"? 'And they could not take hold of his words before the people'. [Matt. 22:15-22; Mark 12:13-17; Luke 20:20-26] We spent twenty minutes unpacking the exchange and the escape phrase "render unto Caesar the things that are Caesar's and unto God the things that are God's" Theologians have raked this ever since, using it to define a disconnection between sacred and secular, though that'd been invented in Athens rather earlier. The actual crisis - trap set, sprung and evaded - lasted what? A hundred seconds? Wit is swift. It comes from the whole body not just the knowing bit. It is not - unlike joking - formulaic. It relies so much on the moment. If I'd said "Why?" to J's attacker it mightn't have worked at all. I've long wanted to be a fly on the wall when JC's questioners reported back to Caiaphas. "What did he say? Go on, what did he say" "Er well er um he said 'render... etc"" "What the heck's that supposed to mean? Look - let me think - right - yes - go and find a woman who's committed adultery, get the stoning ready, then ask him what's wrong with carrying out the Law of Moses. He'll never get out of that."

I just remembered I was talking, long ago, with a American Professor of English at Michigan - my son's late godfather James Gindin - about this particular street crisis. Confronted with the dilemma, a woman awaiting death, a crowd hefting stones and a pointed question about respect for the law, J bent down and began to write on the ground with his finger. Jim suggested Christ was letting them know he knew his scriptures too. I also needed to understand how deep in Judaism is respect for the law. Didn't it, he was implying, have some bearing on the precise conduct of a judicial stoning? His scribbling gained time to survey the crowd, to note the actual witness who must, in law, cast the first stone. As a communal act, any one stoner can evade the unpleasantness of being the one who started the killing. There was a click in my mind, as we chatted, about the three blanks rounds allotted at random to a firing squad, so each man with the vile task could hope his might be the rifle with the blank, and obey his orders and conscience easier. J looking up from his writing in the earth made hiding in the stoning party impossible. It was not the words "let he who is without sin cast the first stone" that, of themselves, saved the woman. How many times since has an equivalent plea fallen on stony ground? Jim said "He could have been writing anything - maybe just scratching". It was the gesture that mattered and the fact that what was spoken was to an individual not a crowd.

So what happened this time when the questioners went back to the High Priest? "What! Something about procedure? What on earth are you talking about? Who told you that?" "Well no-one as such but ..." "Fools, there's nothing but nothing about an actual witness having to throw first, you total idiots!"

[None watched with Christ. Though Peter tried, his courage failed him. None stepped to the mark when unesteemed, Christ faced his crucifiers.]

Dear All. The inclement weather brings with it the risk of lightening strikes and as a result of this possible loss of service across campus. Last night the links between Edgbaston and Selly Oak campuses were lost due to hits on the Telewest exchanges and today the Conference Park was affected too. Both services are now active again with the problem last being rectified within a couple of hours.

WEATHER CONDITIONS - FLOODING Importance: High
Dear Colleague. The University has been informed that the following roads are flooded: Bristol Road/Bournbrook Road Junction, Vincent Drive, and Edgbaston Park Road. I would be grateful if you could circulate this information to your staff in order that they can make alternative plans for their journeys home at the end of the day. Jonathan Nicholls

The Rector, Brian Hall, in the Parish Magazine of St.Mary, Handsworth for 7 July (delivered on Saturday) reports his return from a Greek Island holiday; his fifth visit to the same place:

What was unexpected (and for which I couldn't prepare) was the 'snowfall' of ash which, for three days, gently descended on us, carried on the wind from forest fires we could see driving across the mainland. At one stage there were 130 such fires raging out of control in the heat.
Posted by sibadd