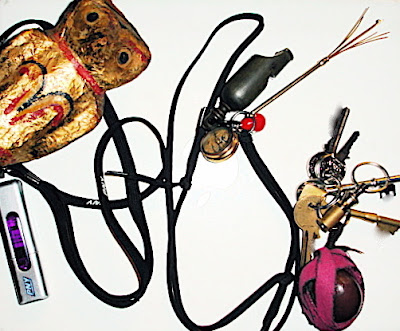 Among the small objects I keep close, some actually hung round my neck, are a flashdrive able to store one gigabyte, a compass (from my mother), an enamel egg with a ladybird on it (from my half-sister at Easter - one of many regular seasonal gifts to the whole family), a gilt swizzle-stick, for making bubbles livelier in champagne, given me by sister - Bay - for my fiftieth birthday (the swizzle draws neatly into its holder), a Great Western Railway stationmaster's whistle made of horn from the 1890s by Hudsons Acme, just up the road from here, but bought at a carboot sale 10 years ago, and a useful supplement to my bell when cycling, as well as for calling the dog. The net float on the key ring is from Ypsos where Summer Song lies. The papier-mâché owl wrapped in gold paper is Greek. It has been with me since the 1960s. Also given me by half-sister, Dorothy, it swung from the bulkhead of the small boat - Young Tiger - that took me across the Atlantic in 1965-1996.

Cycling to the University, a car sped by with a company logo on its door. With time to spare I followed it as the driver turned back up a Greenfield Road towards Five Ways. In a queue up to the roundabout I stopped beside the smart silver estate. "Excuse me. You were driving obscenely fast." "You fucking cockroach. If I see you again I'll mow you down. Osama Bin Laden will deal with you". "Don't you mean Jeremy Clarkson?" But he was unable to access his RAM and continued perming imprecations from a limited but venomous ROM.
Posted by sibadd