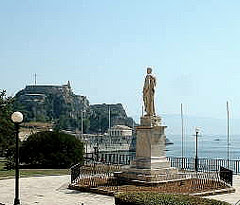 The title of this blog is Democracy Street - our address in Ano Korakiana. Furthermore our neighbour is called Leftheris which means 'freeman'. On February 4 while travelling to Corfu by train and ship, John Richfield and I had alighted from the train that brought us from Paris, crossed a canal bridge to Piazzale Roma, and cycled, on a slightly confusing route towards our Adriatic ferry. Entering the maritime basin, we had woven among the parked supertrucks on the vast apron of the ferry terminal where we spied our ship rising above the waiting road traffic. There were very few independent travellers at that time of year. We got into conversation with one in the small cluster waiting to board. Travelling south on his motorbike, he was an academic, a philosopher - Alex Lloyd-Kapodistrias, descendant of the first Prime Minister of Greece, who's statue stands prominently in the city of Corfu where he was born on the 11 February 1776. Before the War of Independence, Kapodistrias, aged 25, had practised medicine in Corfu and was made a minister of the seven Ionian islands - the Septinsular Republic - the first self-governed territory of Greece.

Dear Alex. I hope you are prospering.I hope you don’t mind me sidling up to mentioning you in my diary. Connectionism and synchronicity. Herete. Simon

Not at all! Always a pleasure getting a message from you! In a few weeks I will be in Corfu for a month. What are your plans? If you are there, let’s meet! Cheers, Alex

I'm sad that we will not return to Corfu until September. Best wishes, Simon

* * * *
As well as being the birth island of Greece's first Prime Minister, Corfu can also claim Nicolaos Mantzaros, who composed the music for National Anthem of Greece, based on the 'Hymn to the Freedom' by the Ionian poet Dionysios Solomos, from Zakynthos.
Posted by sibadd