Aristeidis Metallinos - Αριστείδης Μεταλληνός - is known to few. Villagers of Ano Korakiana older than 30 remember talking to him as children.  Aristeidis' son, Andrea, died in 2016. We attended his crowded funeral at Agios Athanasios, the cathedral of Ano Korakiana. We're honoured to be friends of Maria,  Andrea's sister, daughter of Aristeidis, also her son, Tassos; also of Angeliki, the sculptor's grand-daughter and her mother, Anna, Andrea's widow.
Aristeidis Metallinos was a craftsman of many skills, who became, in the last part of his long life, a sculptor - one of the island's talents. He died 20 years before we came to have a home in his village. Six years after our arrival, we were invited to visit the museum in which Andrea and Anna lived and in which the sculptor's work is currently displayed. Few others, Greeks or foreigners, have been inside.  It was once described as a 'museum', but last year that name was removed by workman in 2017, leaving Andrea's plaque on the front of the house, attesting it as his father's place of work. 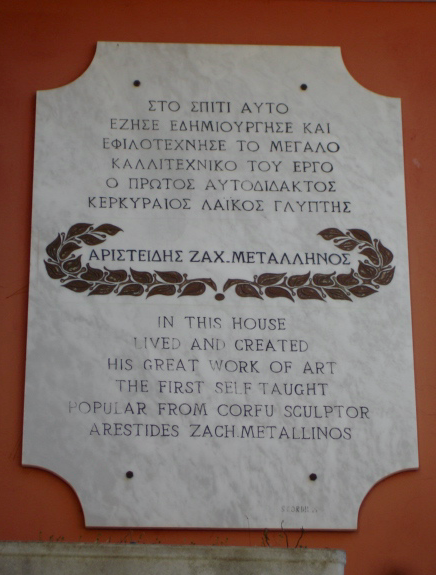 To make his work known, a project in which we have faith, I submitted a Wikipedia entry in English and Greek. Two years ago, Angeliki, Lin and I, with Andrea's approval, made a draft catalogue of every work in the 'museum'. 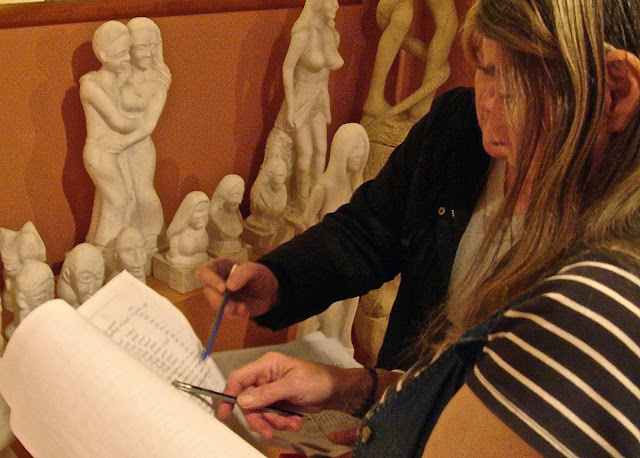 Richard Pine was permitted to use one of the sculptor's marble friezes - The Saint of Preveza - in his book Greece Through Irish Eyes. In 2016 our son Richard made and administers a website owned and paid for by the family.
I have shown photos of many of the works to interested Corfiot artists and writers, Greek and British - Maria Strani-Potts, Jim Potts, Richard Pine, Katherine Wise. Also Corfiot historian John Petsalis author of Corfu Museum on-line, and his colleague photographer, Effie Stathia; the cultural anthropologist, Dr Alexandra Moschovi at the University of Sunderland. Irini Savanni, art historian and curator at the University of Athens, who I met in Ano Korakiana, her village. Aristeidis Metallinos is mentioned on Ano Korakiana's website and blog authored by Thanassis Spingos.
The first noting of the sculptor outside his village was by Giannis M. Maris - welcome, but brief, in a collection of artists' biographies published in 1978. The catalogue Angeliki, Linda and I made of the works in the museum in Ano Korakiana shows just 25 sculptures completed by that year.

A much fuller paper of 23 pages illustrated with black and white photos of the artist's work was written by Professor Eurydice Antzoulatou-Retsila (she told me, in a letter, she preferred 'Eurydice' to the Greeklish 'Evridiki') published in Myriovivlos, vol. 7, Athens, pp. 37-47 - two years before the artist's death. 'Corfiot themes in the craft of the laic sculptor Aristeidi Metallinou'.
Maria and Jim Potts have generously donated a 'free translation' of this paper's abstract:


The laic sculptor (sculptor of the people) Aristeidis Metallinos (1908-1987), from the Corfu village of Ano Korakiana, provides us with a common example of a folk artist or craftsman, for whom the need to earn a living pushes him/her in the direction of an occupation involving a variety of forms of traditional artisanal handicraft-work, until reaching the final stage of free and unconstrained expression of artistic inspiration through, e.g. sculpture in stone (in the case of Metallinos).
In the course of his difficult life, he practised as a wood-carver, a professional shoe-maker. He built fireplaces and ovens, carved and chiselled olive press mill-stones and hand grinding-mills.
At the advanced age of 67, he occupied himself as a sculptor carving in stone, declaring that he was self-taught. He thus realised a long-standing ambition to create and depict different forms of life which were slowly disappearing, as he had understood from his own experience of life.  His works of art demonstrate the true meaning of laic folk-art and provide visual testimony and evidence of aspects of Corfu’s culture and way of life, particularly in the north west of Corfu.
The inspiration for Metallinos’ sculptures was the folklore of the island. They are presented here for the first time. They were created in the period between 1975 and 1983. Two types are distinguishable: bas-relief sculptures, and statues, carved from white Kozani marble or Corfu stone.

They depict agricultural occupations* (milking a goat, a village woman carrying a load, the village olive press), traditional crafts and professions (the shoemaker/cobbler, the milkman, the village baker, the blacksmith), domestic activities (grinding with a hand-mill, a village woman kneading dough, a peasant woman carrying water), traditional handicrafts (a peasant woman with a distaff, another with a shepherd), villagers wearing traditional costumes (‘My mother’, an elderly man from Korakiana, a peasant woman in formal costume, a Corfiot).
NB If the word peasant’ is not felt appropriate now, substitute ‘villager’.

*I've recorded several of these. See 'Ano Korakiana in relief'

I am looking for ways of getting a translation of the whole paper – but without paying.