The soil spread by the developer, when re-creating the space for growing things, is acknowledged problematic. Didn’t Susan Green from Douglas Road, other side of Handsworth Park, phone me the day the site opened for inspection by those who wanted allotments?
“No way am I taking up a plot, Simon! The ground's full of rubbish. There’s dry clay just below the topsoil.”
My enthusiasm overrode her carping, but she had a point. The site's in a wonderful place, a great green space under two miles from the centre of Birmingham, marching beside Handsworth Park, whose trees provide its skyline, backdrop and, when the wind blows, sounds that override the city's rumble. In some parts the topsoil, such as it was, got bulldozed back into place, over the heavy-plant-compacted ground of the builder’s work yard. Ralph’s dug down several feet on his plot, broken up the hard surface down there, and, with pick and shovel, removed a ton of hardcore so his plot can drain. Our plot, next to the Park fence, is out of that zone, but since I’ve been working it I’ve removed the remains of the previous gardeners’ equipment, fragments of brick and slab, parts of greenhouses  - frames and broken glass - wire, pipes, guttering and plastic bags – skimmed by the bulldozer into a stew of soil, wood and shattered sheds that sat like a dyke, a good 15 feet high, 80 yards long, squatting for nearly a decade behind the terrace houses along Holly Road. I saw it through a friend’s upstair’s window.
“One day” I assured him “there’ll be a cricket pitch there and beyond that allotments”
“I’ll believe it”
Of that agreement, only the allotments have so far arrived. The ground for them was laid out by sifting out the trunks of a couple of ripped up sycamores, and bulldozing the pile back into place across the north west corner of the site – 80 plots divided by gravel and drained paths.

The surface was raked of its most obvious obstructions and allowed to sit and grow weeds for a couple more years...

... until in June 2010 the Victoria Jubilee Allotments went public. Lin and I chose our plot in an ideal spot, adjoining a tap, near the remaining hedge, a gently sloping aspect down to Handsworth Park for whose restoration we and many others had lobbied over many years. I couldn’t have been happier, enjoying the extra pleasure of knowing that these allotments might never have been but for the prolonged local campaign I’d led to gain a city negotiated Section 106 Agreement that had the developer, who’d wanted the whole site for building, passing two thirds of it back to the public domain for allotments and playing fields - the latter still to come, despite an agreement made in 2004. Thereafter the challenge has been mine. John Martin teased me gently “Simon! You’ve been excited by the idea of working an allotment”
By 2013 I was arriving back from a time away, reluctant even to go out to the plot. It’s not just that the soil left us by the developer was so intractable. Far from it.  A few gardeners on the Victoria Jubilee Allotments have been producing successful harvests since they started here. I am not one of them. I have struggled to turn the 'idea' that John spoke of into a properly worked garden producing food that Lin and I can cook and eat at home or pass around the family. There’s a sturdy shed with the tools I need. Paths. There are fruit trees, and of course Gill’s beehive has a home here. I’ve won a few crops – broad beans, runner beans, potatoes, spinach. But they’ve arrived in desultory ways.
"How can I prepare something with your veg unless you warn me?" Lin complains
Other enthusiastic applicants for plots have left after a brief struggle with the ground, with couch grass and the latest annual weeds. I have no intention of ‘giving up’. The 'idea' keeps me going. I’ve argued with Ziggi.
“I’m generations from the land. My ancestors were city people from the start of the industrial revolution. We don’t do ‘back to the land”
She disagrees. We were at Dukes in St.James. She said she was as removed from the land as I.
“It’s wanting to cook and eat things you’ve grown”
We're both right. You must know how to grow; know how and when to crop and store and you must know how to cook and enjoy the eating.
What matters is that perseverance and a decision to work harder on the soil last autumn has marked a change. I've abandoned - at least for now - the idea of cheap home grown veg and spent money that would be beyond imitating the ideal envisaged in the 1908 Allotments and Smallholdings Act*  passed to help a working man feed his family in the city from an 'allotted plot'.
I've invested in manure. I've bought top-soil. I've paid our helper from Handsworth Helping Hands - Taj - to concentrate on digging and weeding, digging and weeding, digging and weeding; adding in the manure as he goes and removing the larger stones, piling them at the back of the plot or using them to edge paths. I - no 'we' - are beginning to get some degree of farming on this 200 square metre piece of ground. Even far away from it, I dream about the plot. I imagine seeds germinating, saplings blossoming, seedlings, if they survive the pigeons, settling in to grow. While Gill waits to find another swarm, I've worked around the empty beehive and replaced John's slightly shaky net structure... 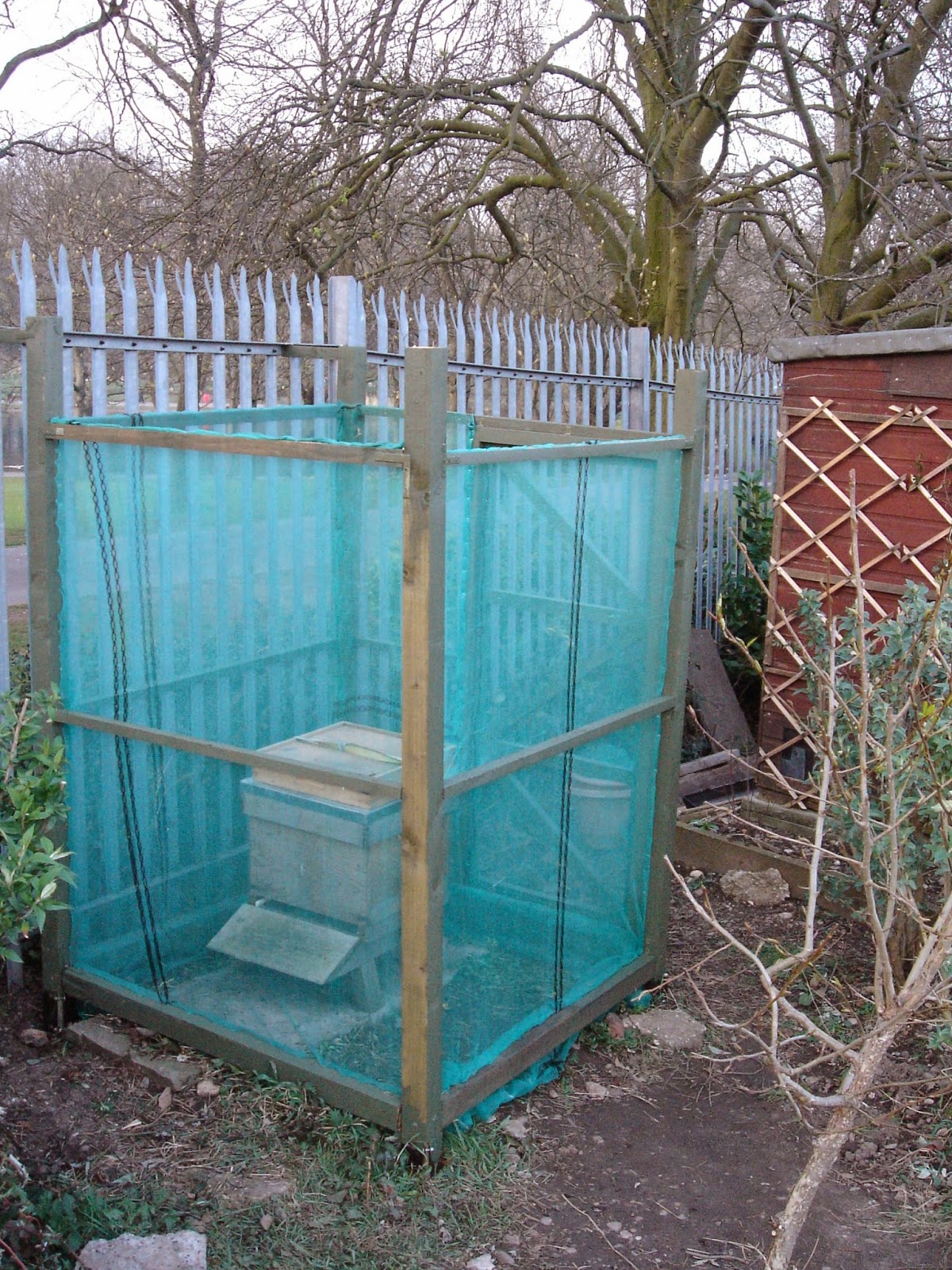 ...and in the last few days of England planted and planted - potatoes, Jerusalem artichokes, spinach, onions, broccoli, cauliflower, Brussels sprouts. I dragged furrows. Laid topsoil there and bedded my young plants and seeds in it, watered them in and added another thin layer of new topsoil, friable as a nursery play garden's, and then raked a small layer of the cruder earth over the top, chatting to them the while like an idiot, keeping an eye out for Oscar watching at the steel fence for passing dogs to growl at; bitches to pursue via one of the opening's in the fence I've failed to block.

At Luton in the night we waited for a dawn flight to Greece. I'd slept on the coach to the airport missing tedious stops on the way and now we chatted and did dopey things to pass the time. 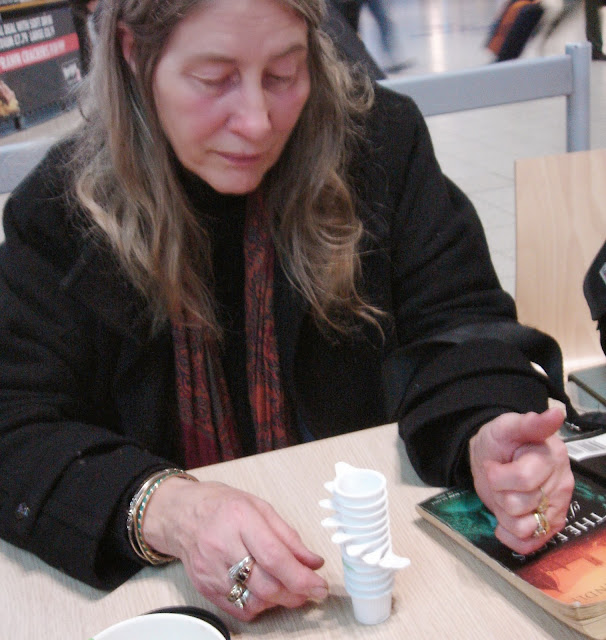 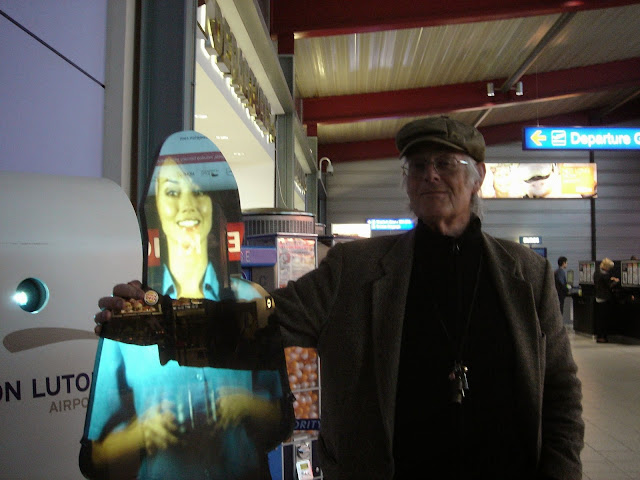 At last we're in the sky, reading, snoozing, snacking, in the compact spaces of budget flight until we're 'aware of the horizon beginning to strain at the rim of the world: aware of islands coming out of the darkness to meet us... '
...descending beside the Albanian mountains west of Vlorë, hardly a hundred miles north of the green island and beloved Greece where I kneel to touch the concrete half pretending a problem with balance. 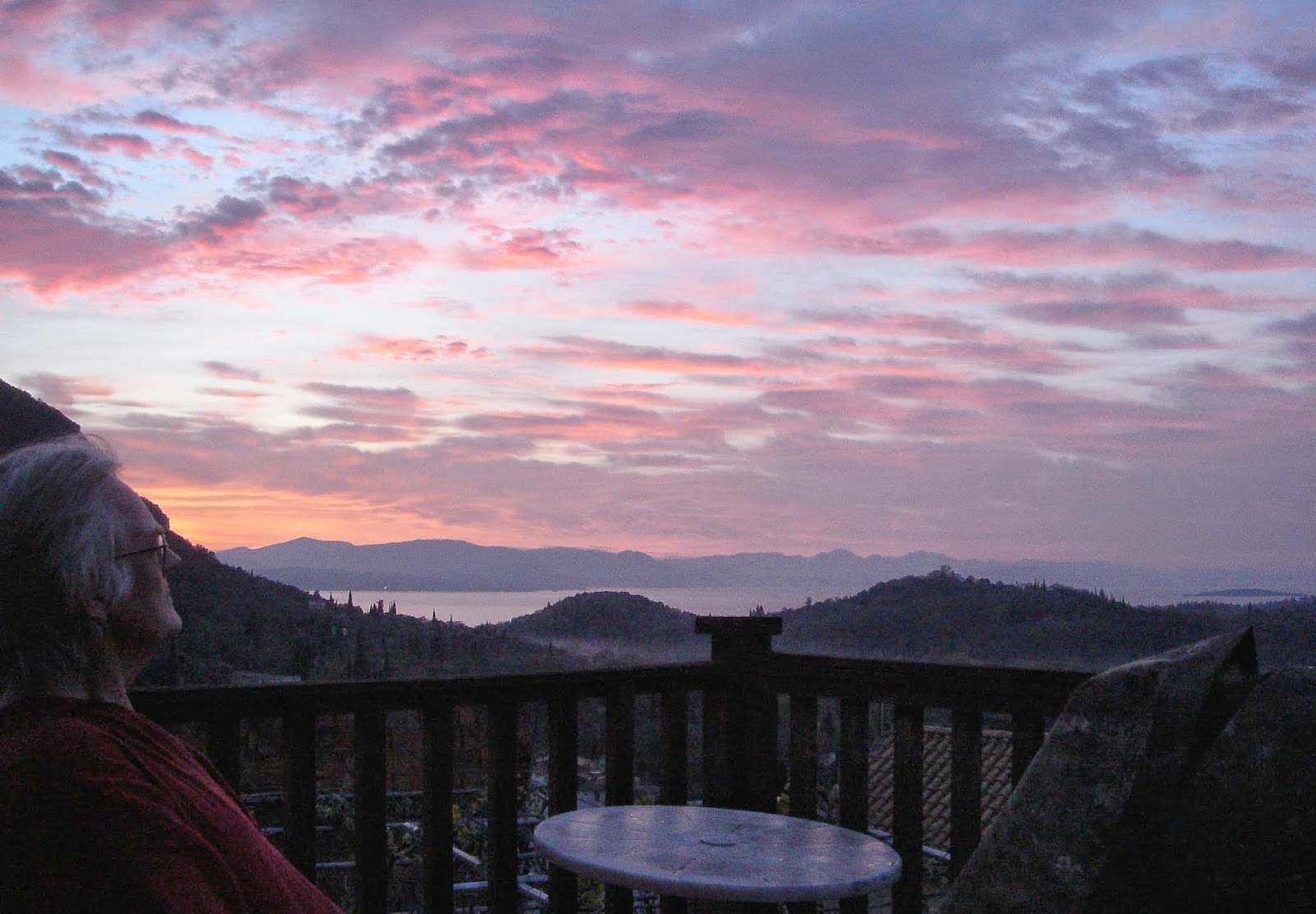 In hours we're at work again, cutting the greenery that blocks the path below the house, tidying the small garden, and - at last - cutting out rotten sections of the wooden balcony... 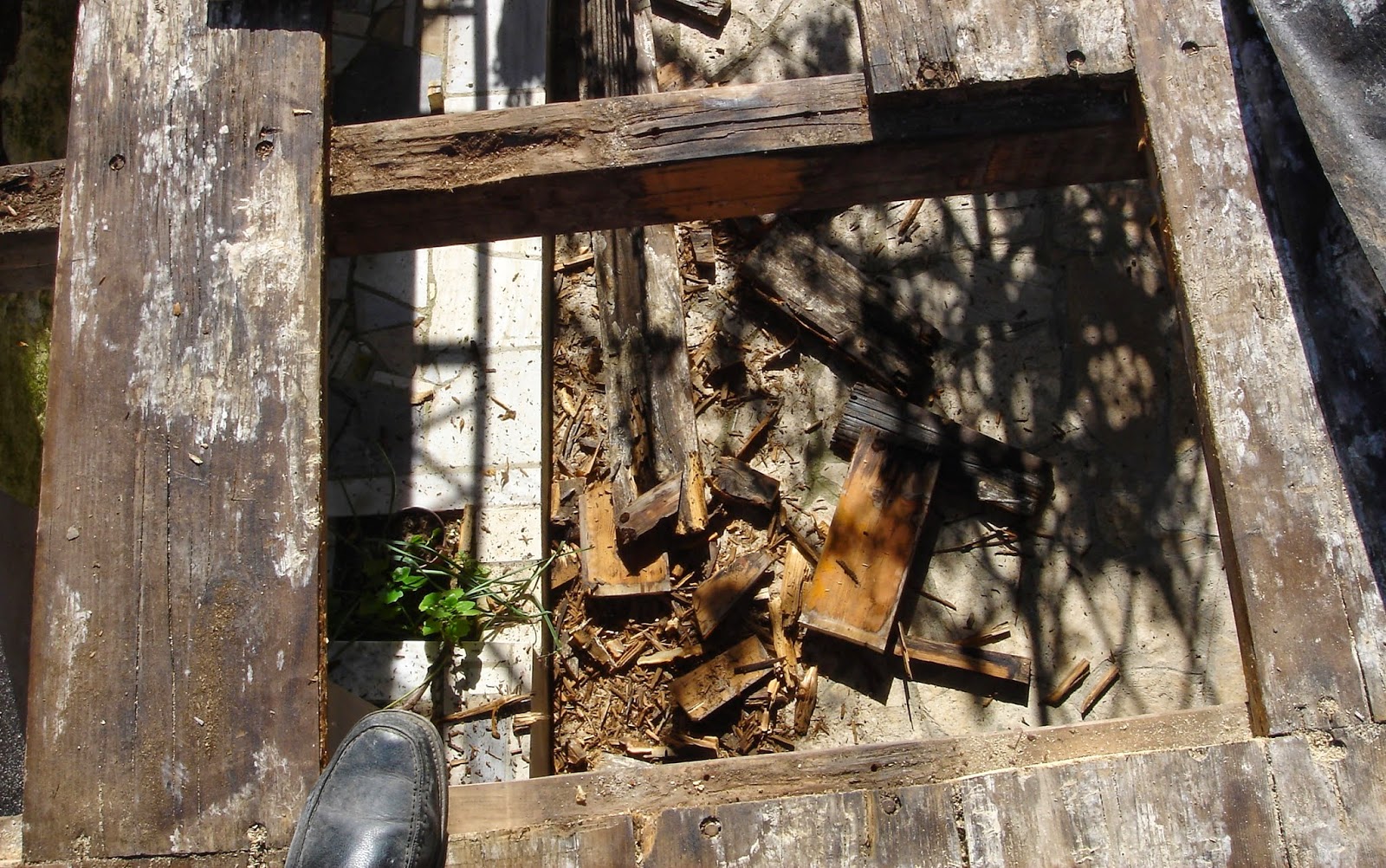 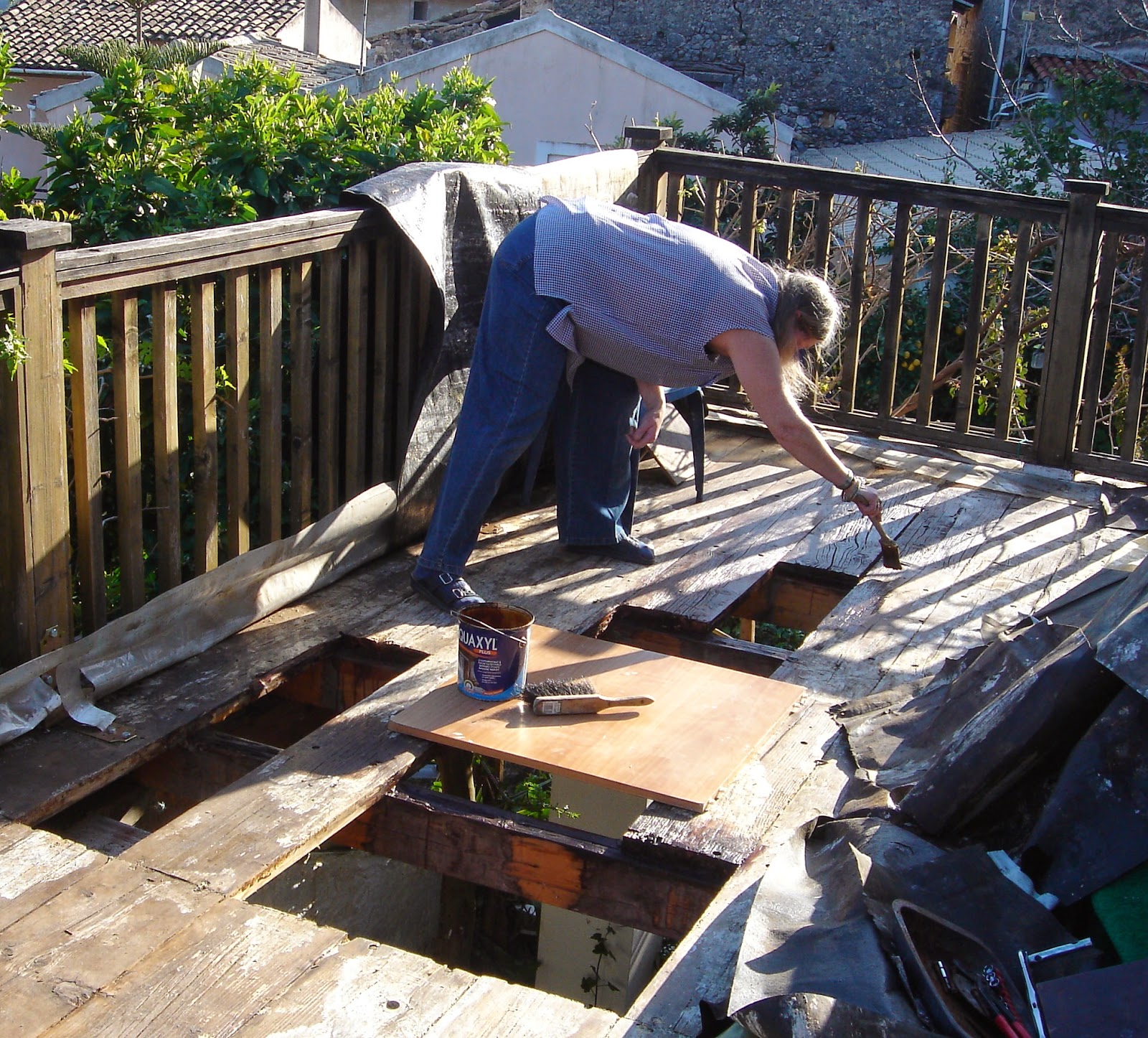 ...straightening the floor in the small bedroom upstairs where some 'lazy idiot' - we know who - had laid a chunk of flooring grade chipboard with no cross beams between joists...

...so that it sagged the width of the small room. We sawed out the chipboard in two sections to extricate its edges from the wall plaster; put in cross beams, fixed them with angles screws to the joists while resting on battens I'd nailed to the joists. Screwing down the curled up edges of the chipboard, we removed its sag; all this before we can add varnished skirting of wood recovered from a dismembered palette waiting in the garden.

*There are plans to remove certain statutory protection of allotments, by giving local councils more 'responsibility' when it comes to being blamed for implementing the new national planning policy framework:   The full list of secondary legislation, orders and regulations (with commentary provided by the DCLG) that the department intends to abolish or amend is as follows: