The previous owners of this house cut down three trees in its small garden to make room for a dish that would enable them to view the same programmes they watched in England. They took it when they left. One of the amputated trees recovered. Lefteris thinks it's an orange. We don’t know. It’s not blossomed since it was cut a few centimetres from the ground. Now its leaves reach over two metres and it bears, for the first time we’ve been here, a few blossoms. 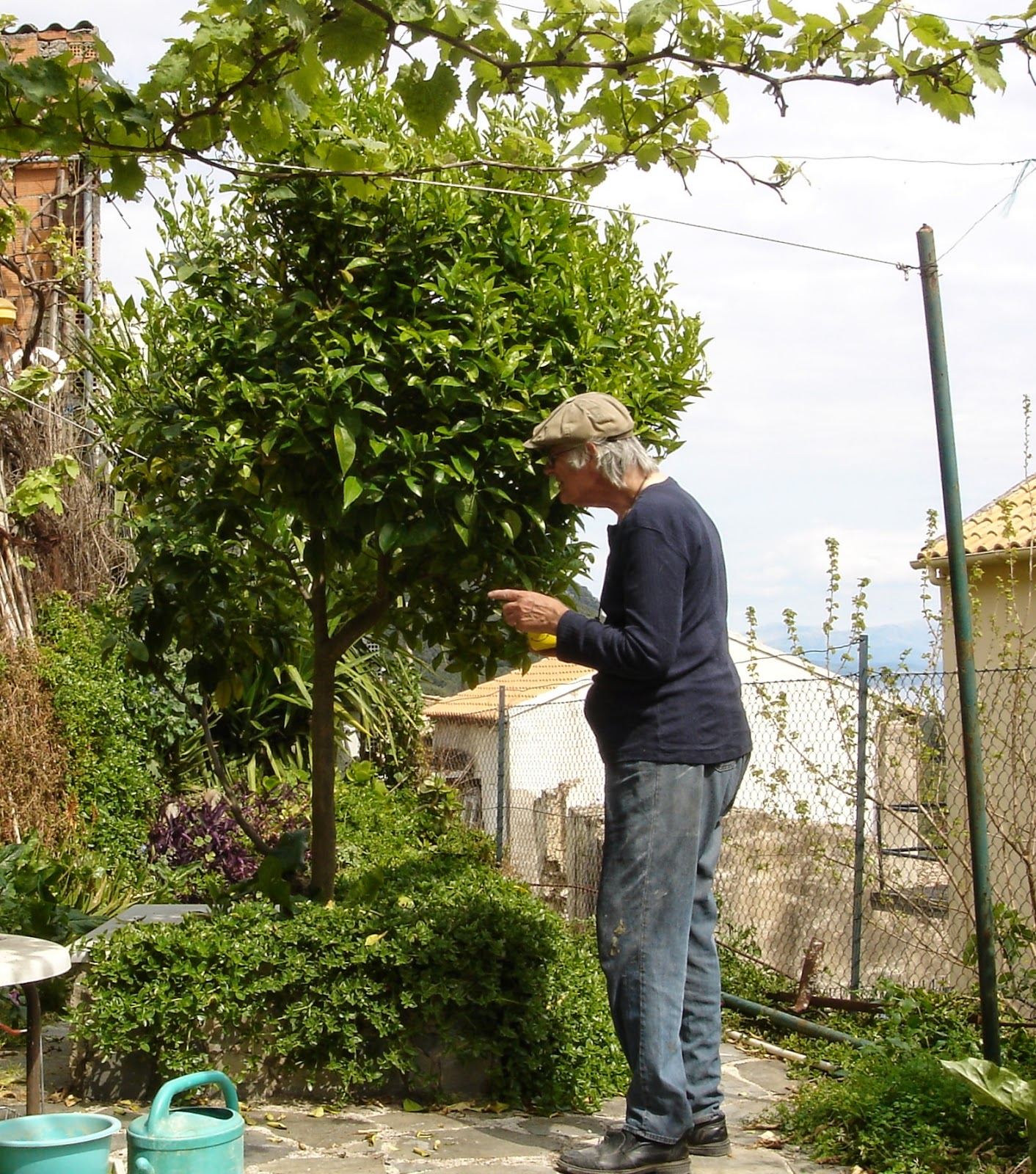 Five clusters of flowers, hidden amid spiky leaved branches.
Will the tree bear fruit again? Right next to our wooden balcony is a fine orange tree, blood orange – one that fruits bi-annually. It's fulsome with blossom. 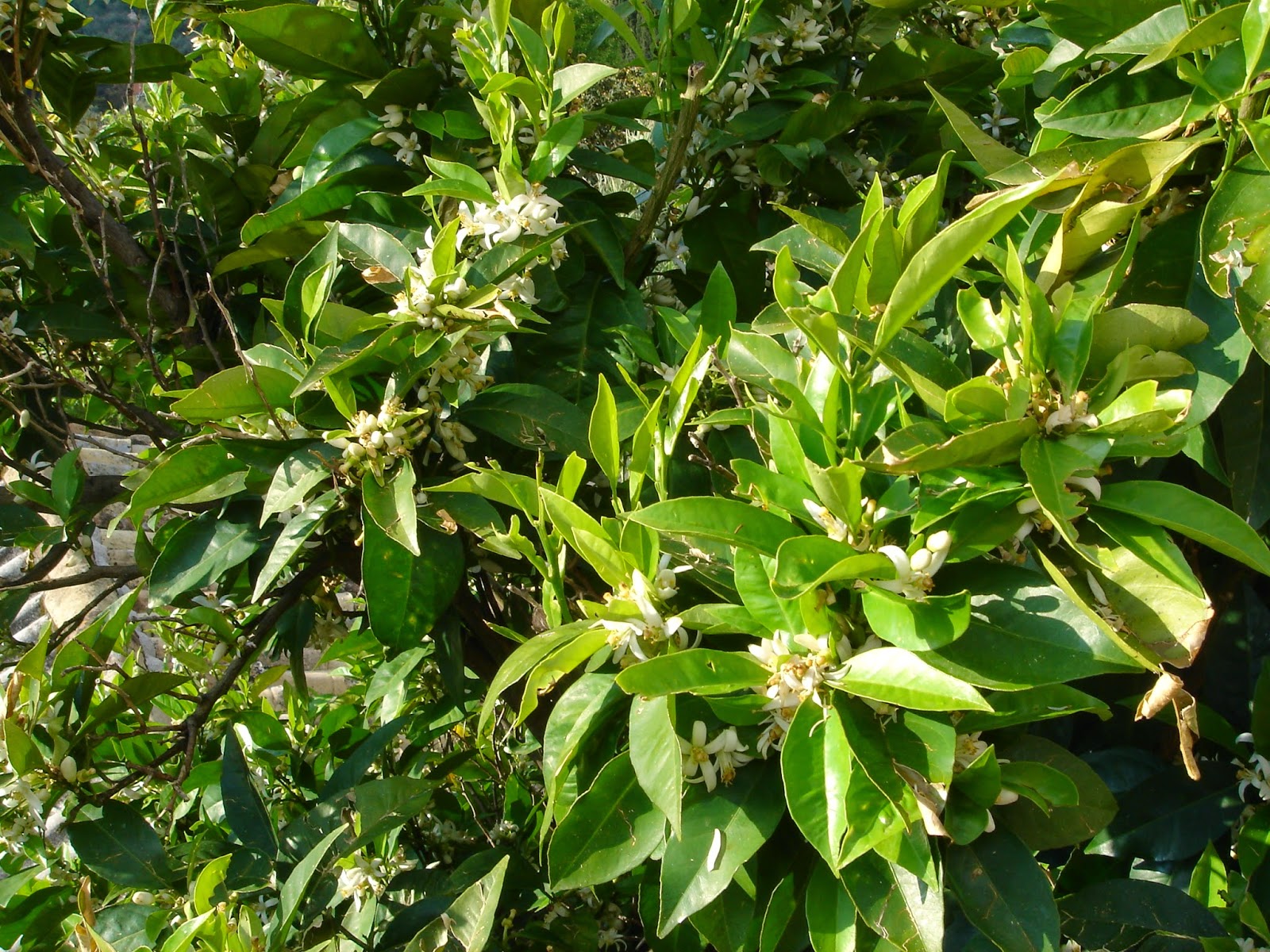 “Every two years. How do you know that?”
“Last year no blossom. This year, as two years ago, a proliferation”
“Perhaps that’s because the blossom wasn’t pollinated”
“There was no blossom to be pollinated”
“How do you know?” repeats Lin
“I remember”
Many bees have been visiting the tree. Their industrious mumble starts at first light. Continues into late afternoon. 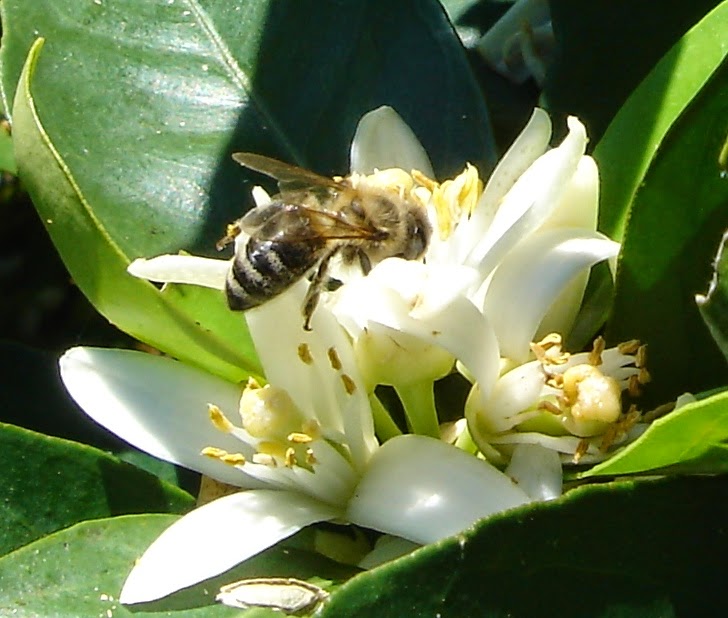 "We just need those bees to spread some pollen on the recovered tree"
"But is it lemon or orange?"
I wade in ignorance, but dip a paint brush into the flowers of the fecund orange tree's blossom and with its pollen yellow from the stamens dab the pistils of the few blossoms on the smaller tree.
"Try the lemon tree too?"
I repeat the process - collecting the precious dust from one of our richly blossoming lemon tree stamens, so that the flowers on the recovered tree may be doubly fertilised. 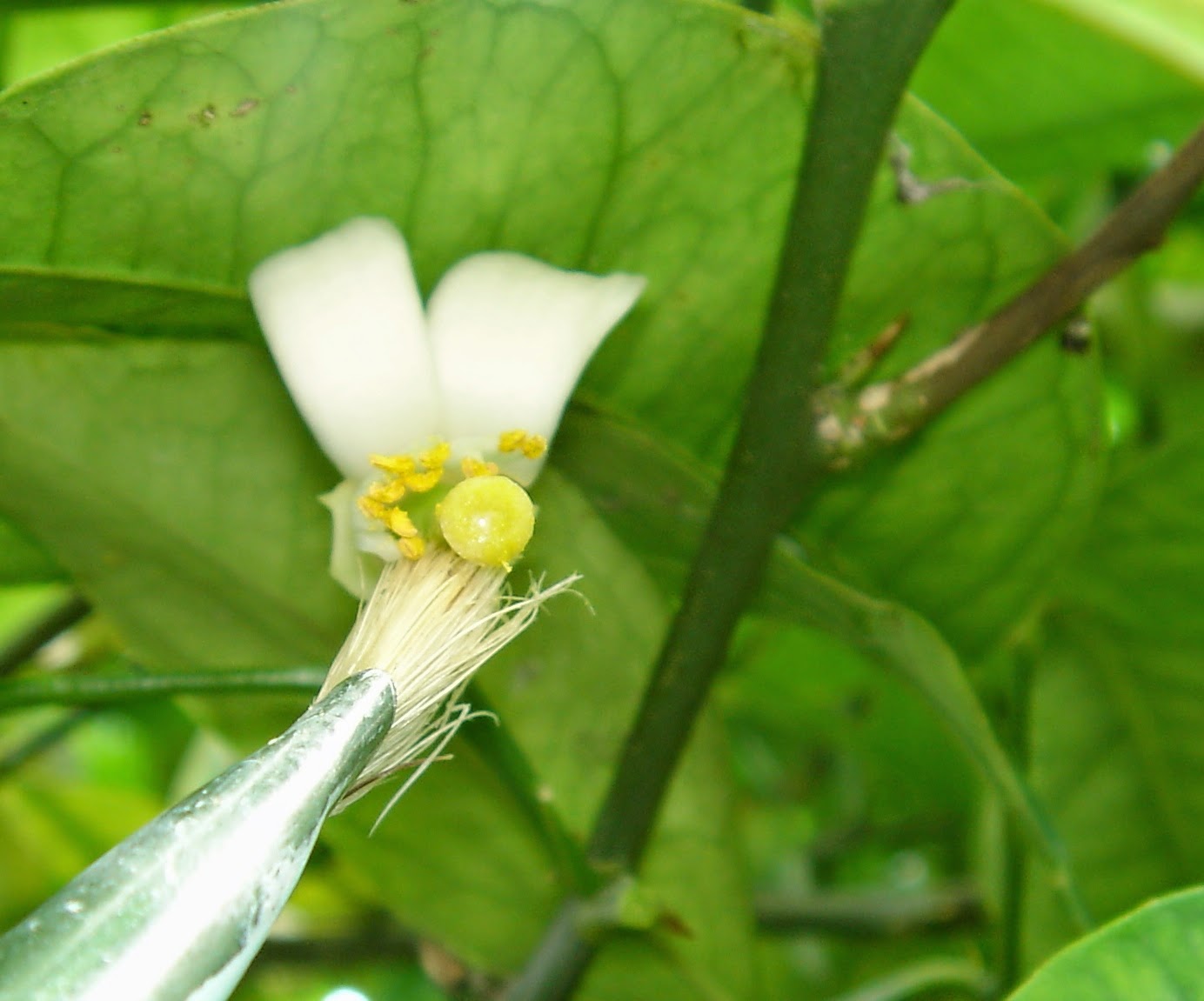 "So if this works; if the pistil I've dabbed with pollen..will it turn into fruit?"
"Should do"
A few days later I'm hanging out laundry to dry and hear a buzzing round the little tree and see bees searching. Then as I stare, one, and then, two bees are all over two of the blossoms, searching, probing, touching stamen and pistil with their bodies.
I've been reading John Crompton's 1947 book The Hive about keeping bees - not, in the first place, for their honey. 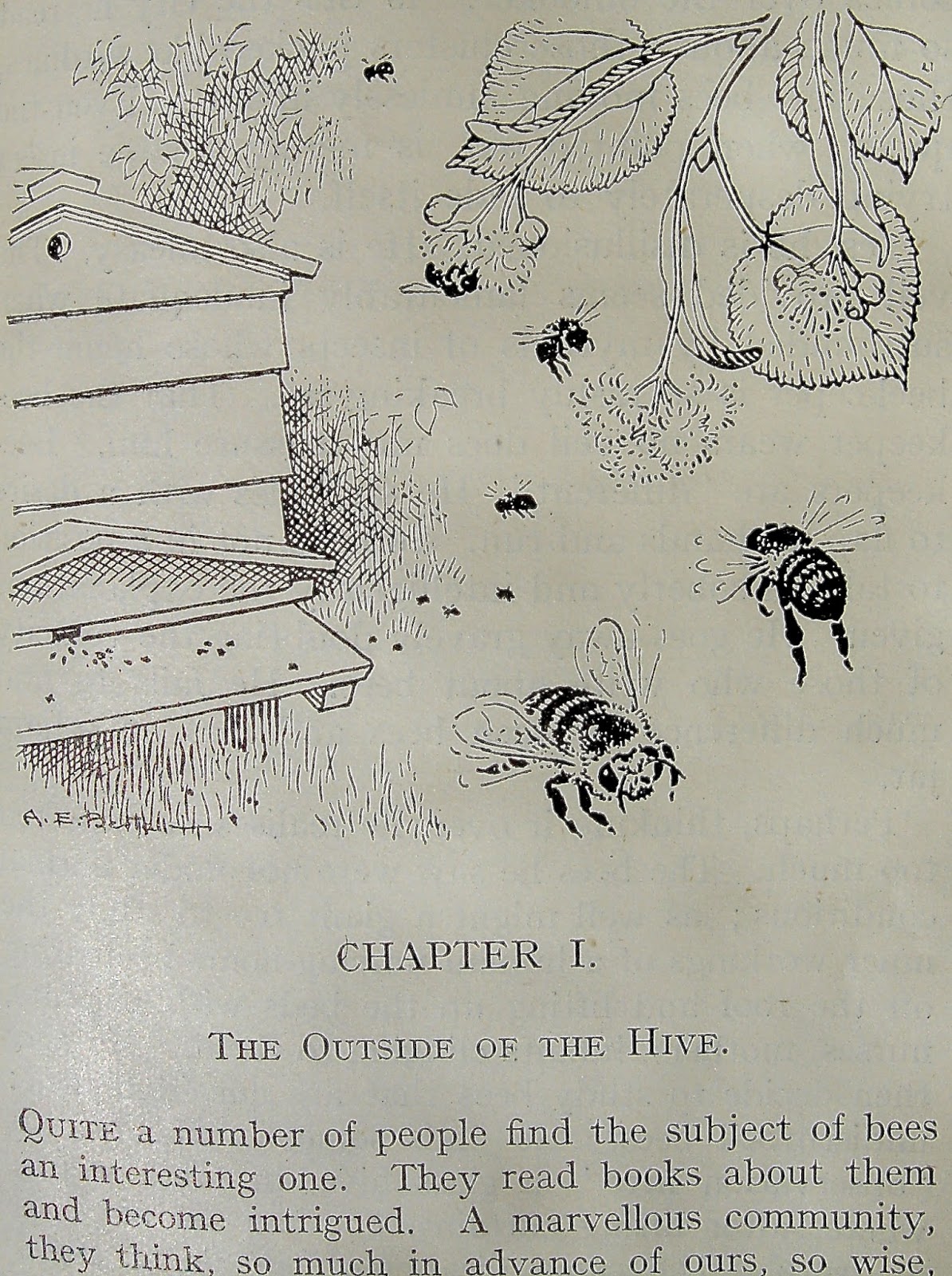 Crompton, though not anthropocentric, is the more readable for unashamedly attributing wisdom to bees, interpreting their actions as if they thought and planned like humans. The odd thing is that despite his admission that his interest in beekeeping began with wanting to ensure the fertility of his fruit trees, he does not at any point in his book describe how pollination actually occurs and what follows its success...The Orange blossom has a stamen (anther and filament), pistil (stigma, style,and ovary), sepals, ovules, and petals...
I do hope Gill has managed to obtain a new swarm to re-populate the hive on Plot 14.
*** ***
We watch the series Game of Thrones  – first two seasons, and want to know what happens next.
"We're on series 4" says a friend
Earlier we'd watched Breaking Bad – sometimes three episodes a night. Then for a break from that story-telling, a look at a Catherine Cookson yarn on DVD, her recognisable characters and familiar turns – the evil landowner, a self-made working class man, a fractured childhood love consummated at last. If it’s not film then I’ve my head in a book, perhaps two at a time. I embrace narrative.
"But you know these great stories, these assemblages of creative talent entertaining audiences across there world; their sucking my brain, leaching out imagination. Instead of inventing things out of words and thoughts on a page, all - music, sound effects, words, faces, places - are created for me to enjoy. Passively. These brilliant sagas use ingenious technologies to colonise what in a book I would be imagining."
"Oh yeah? Then why do you find it so exciting to see those bees cuddling the blossom recovered from the sat-dish placed over them?"
Scripts and above all coherent plots with beginnings and middles and ends, encompassed within a time-scale that fits my sense of the dramatic, stimulates me to excitement and fascination at ‘what’s going to happen now'. The Great War is anticipated; in minutes it’s upon our characters and then - wreaking havoc - it’s past, and the plot is picking up pieces on its route to a happy ending.
"Let's have coffee?"
“Isn’t it almost ironic” I said to Lin, after an especially gripping episode of Breaking Bad, “that we had to exercise will power not to go on to the next, even though it’s so late…yet here we’re living in a country in a crisis such as we’ve not seen in our lifetime. We struggle to grasp it’s drama. We’re like the crew of a vessel far out in the deep ocean that rides a tsunami unnoticed – except through our instruments -  because the wave that will wreak such harm on reaching land, raises us an imperceptible foot and it's a hundred miles wide.

Whatever's happening here is often easily ignored, though on the bus a Greek friend broke off a five way conversation between fellow passengers, one that was started by the young driver as he collected our fares for Ano Korakiana at the Green Bus Station in the town.
"We are discussing 'the situation'" she said
Our impression is of people weary; exhausted, most of the time showing a brave, even cheerful face. But one of the passengers, a neighbour, has a problem with her heart. the clinic here says she needs an operation in Athens.
"It's financially impossible for her. There's supposed to be money set aside for the poorest, but it's not getting to them"


A young man in traditional Greek garb – white pleated skirt, embroidered vest and red pompoms on the tip of his shoes – is floating, his arms outstretched, in the still, turquoise sea. It’s unclear whether he’s dead or just resting from earlier battles with the open water. This photograph, more than any other piece shown in the new exhibition No Country for Young Men in Brussels’ Bozar complex, captures the question that many are asking about Greece today: What is going on with Europe’s first bailout victim?...

*** *** ***
It seems as if we never let up on jobs to prepare the house for the family arriving in a matter of days - painting, joinery, stone laying, filling and drilling... 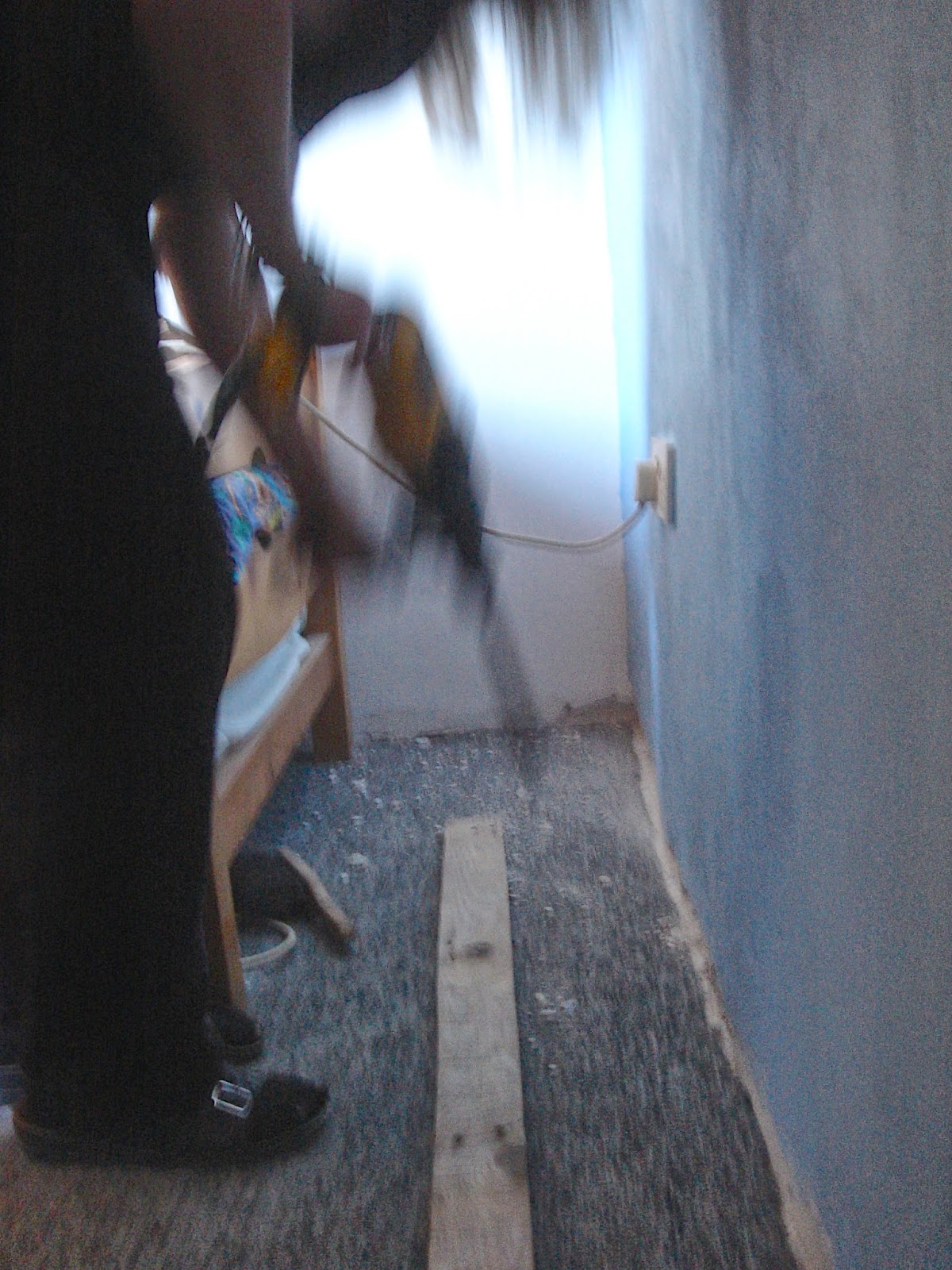 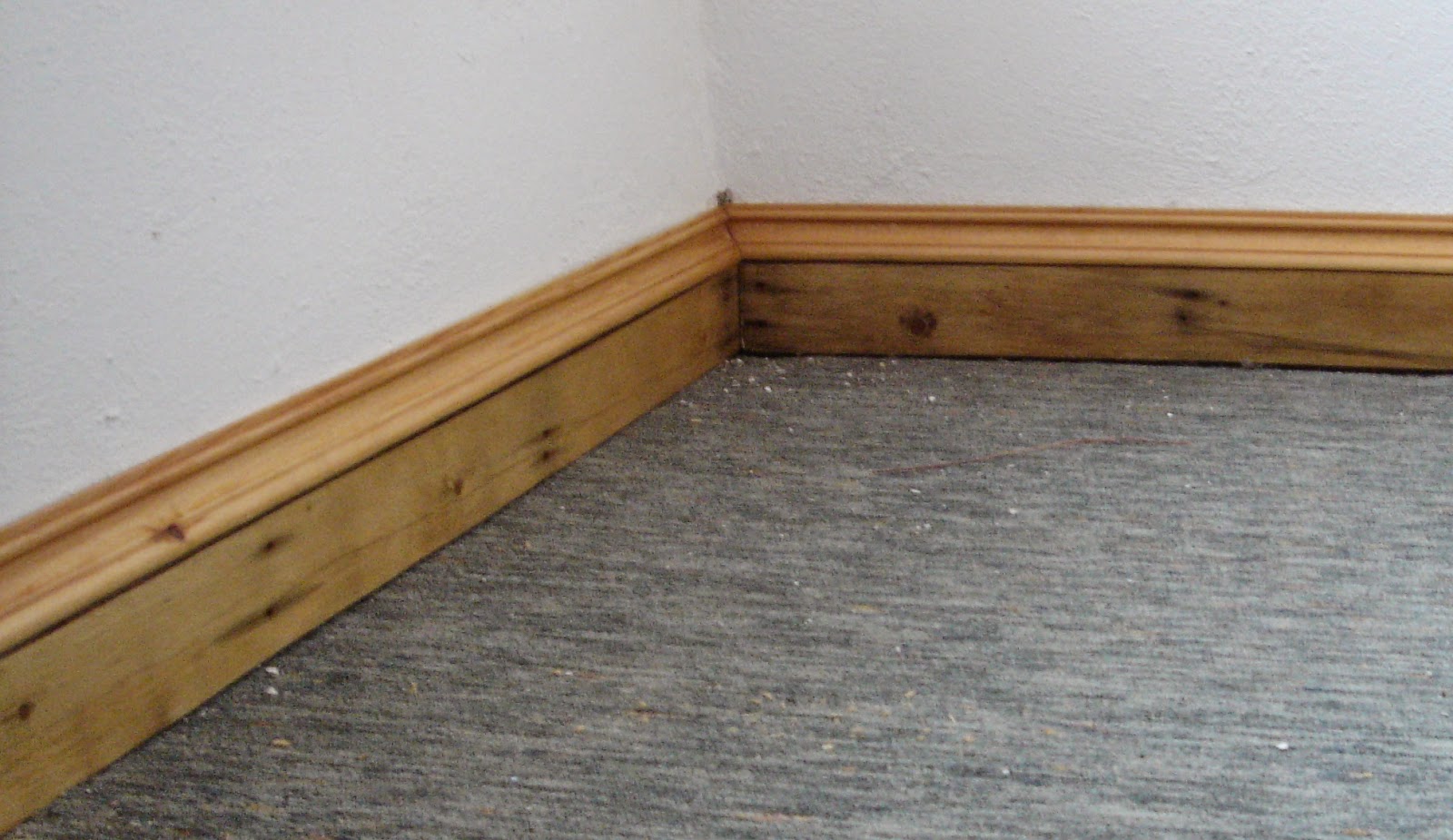 Take apart a well-used palette, removing nails, sanding smooth, varnishing. Prepare the space between wall and carpet in the room where Oliver will sleep - no longer in a cot. Glue and screw the boards to the wall; top them with a trim; itself sanded to fit the top of each board, and then fill any spaces left between skirting and wall.
"He's got a lovely view from his window"
"Sure he can't climb out?"
Grandparents, as we did for our children, scan every inch that way 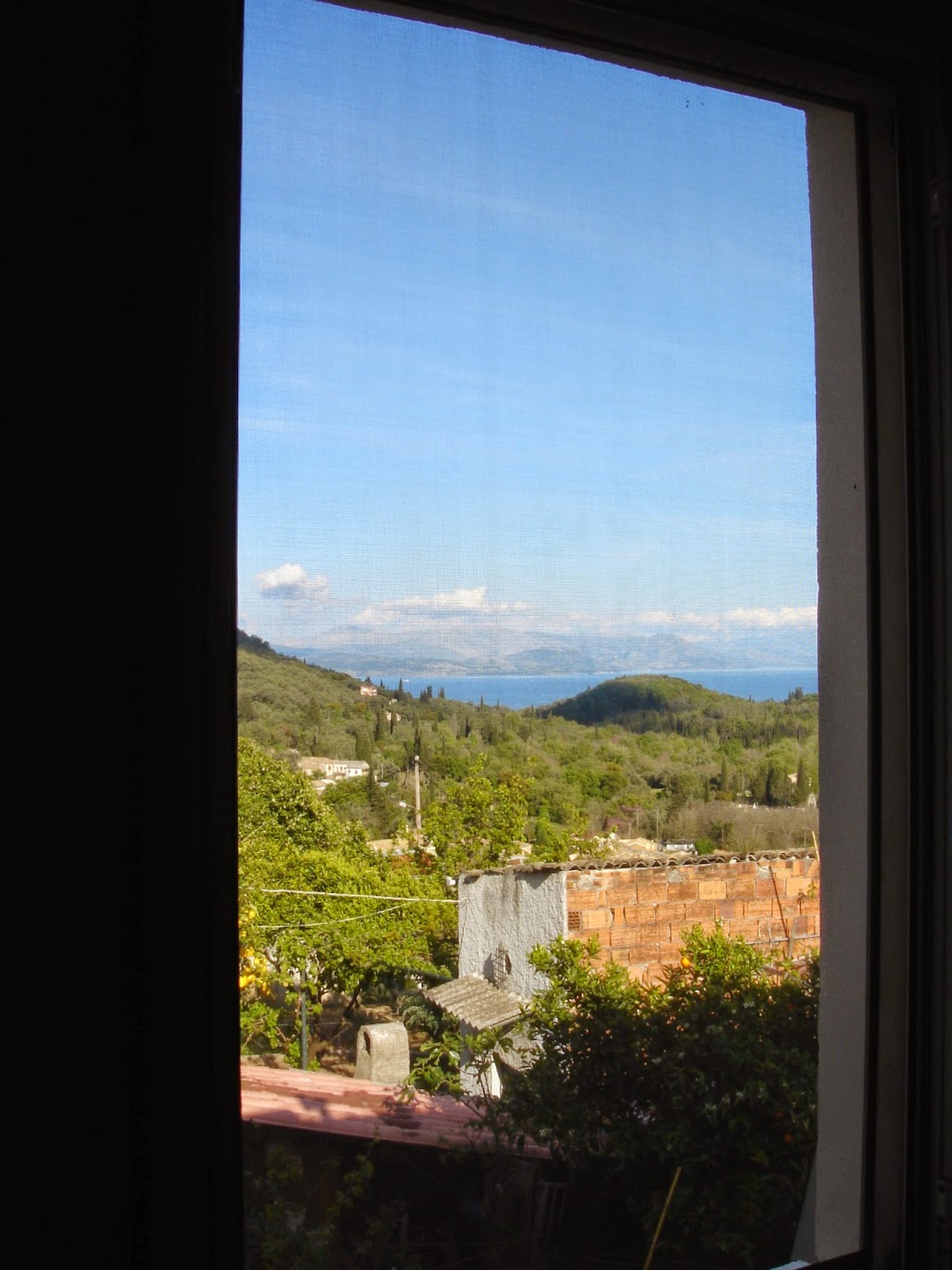 No job seems too small.
"Can you recognise the leg on this plastic table that has been replaced" I asked Sally when she came to lunch yesterday. 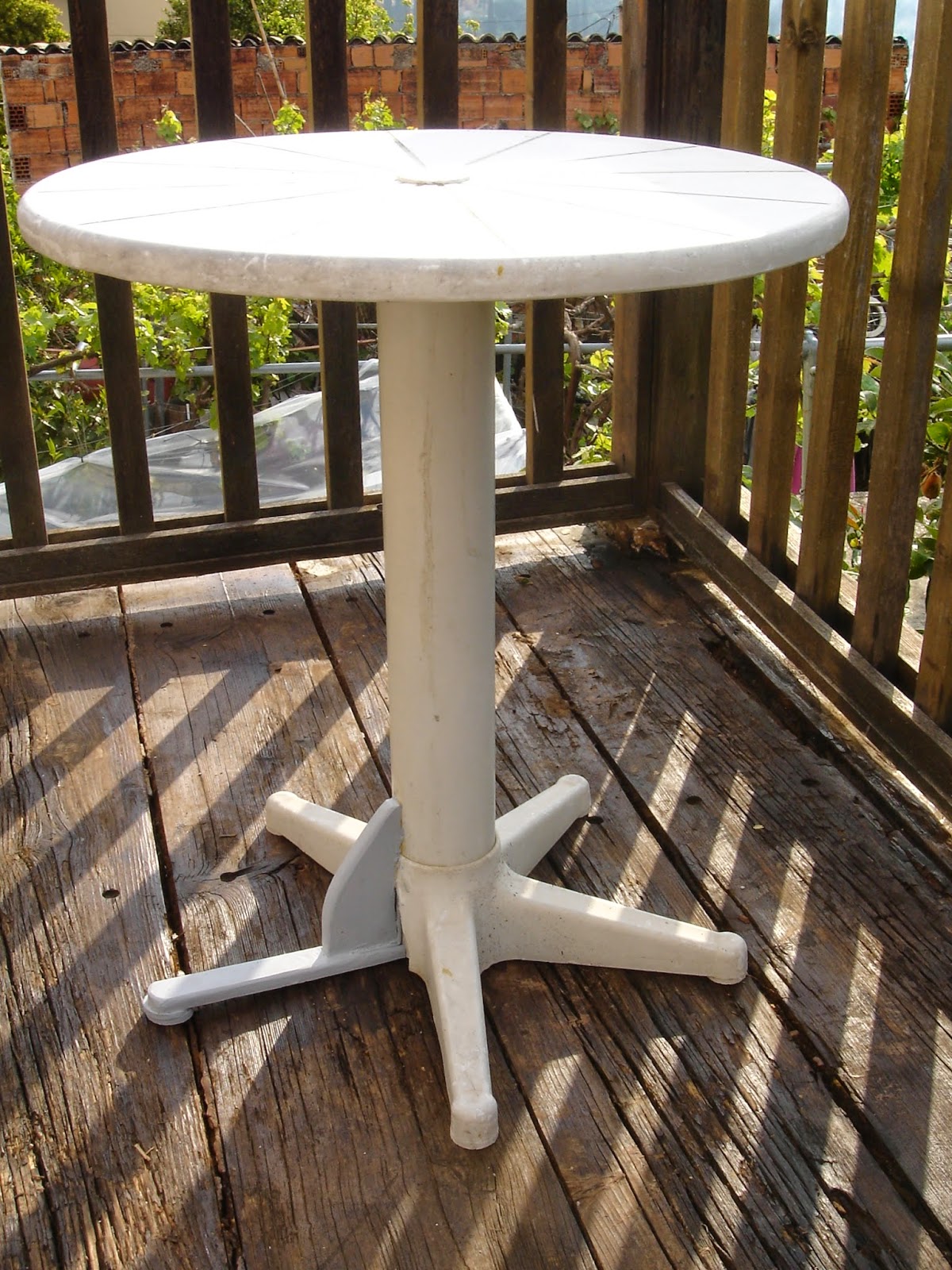 "Four new legs, Simon!"
"Right"
Lin's been preparing the dining room as a temporary bedroom - a space for our friends and their baby. 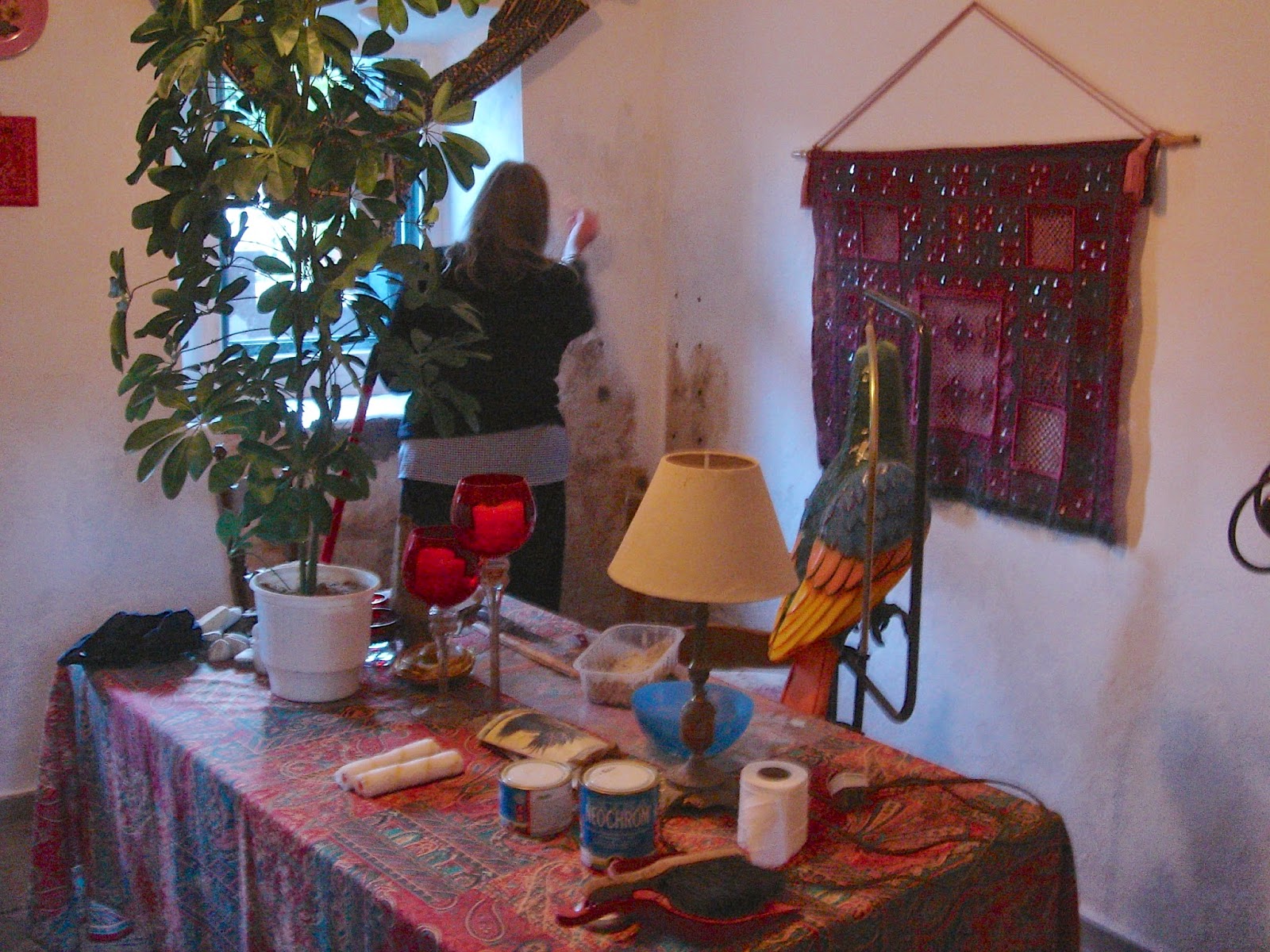 "They need to be able open the stable door top without worry about mosquitoes and flies. I need to make a screen" 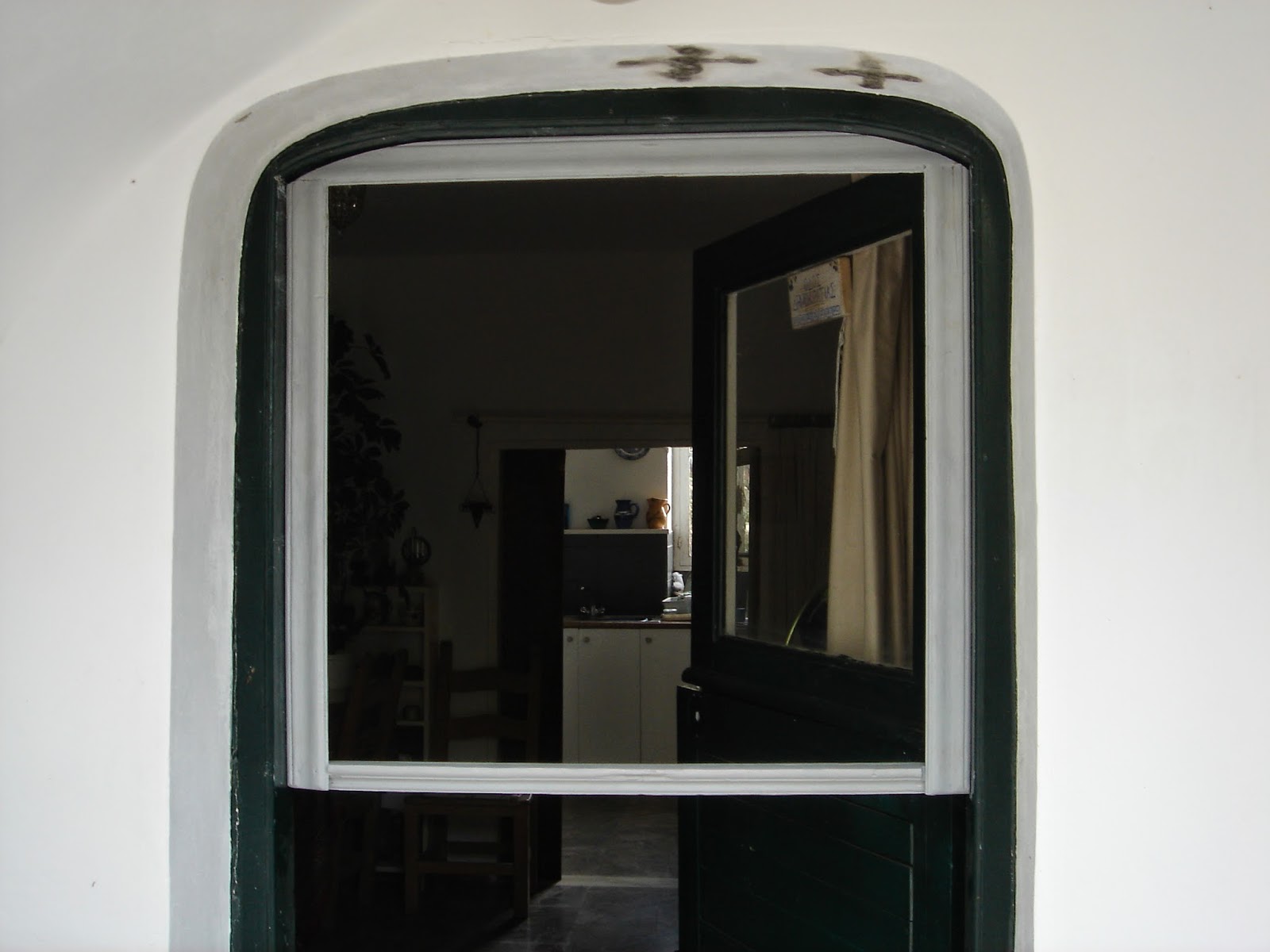 Getting that to fit the top of the curve exactly was tricky.

Our shutters and several window frames are wooden. Their paintwork lifts under the Greek sun. Parts need sanding, undercoating and repainting. 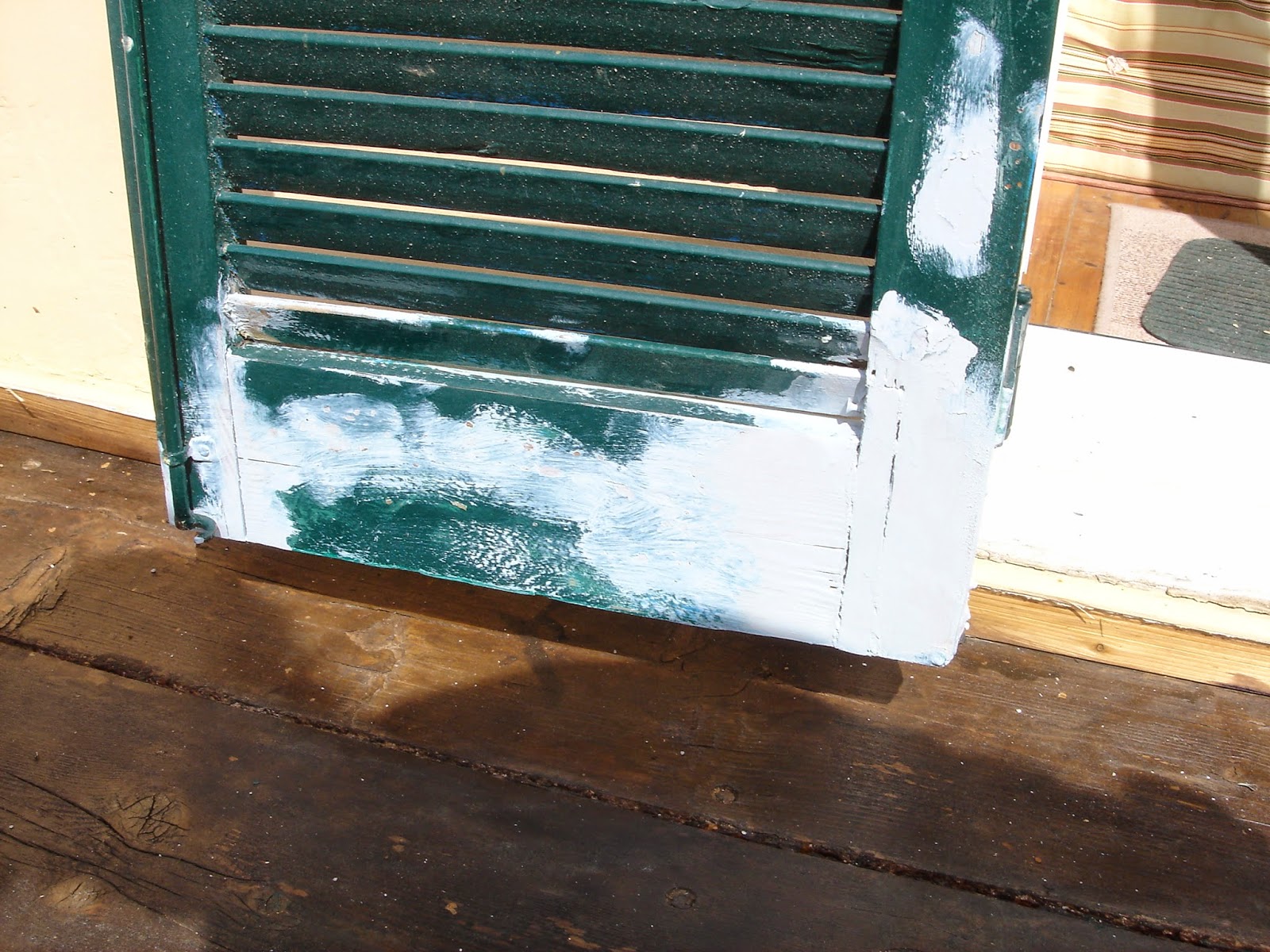 Linda makes a neater step for the veranda door from pieces of recovered marble, bringing me pieces to trim with the angle grinder... 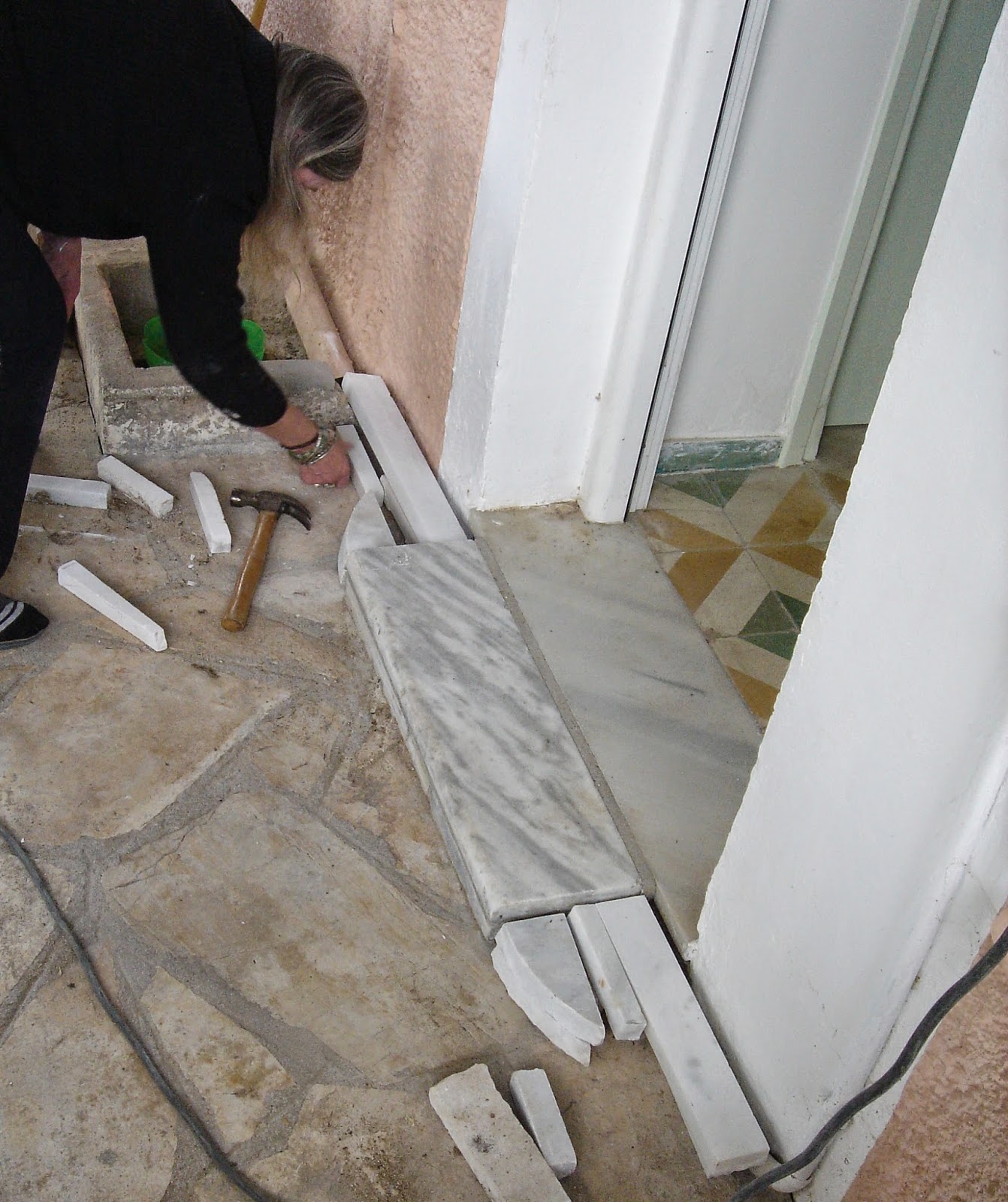 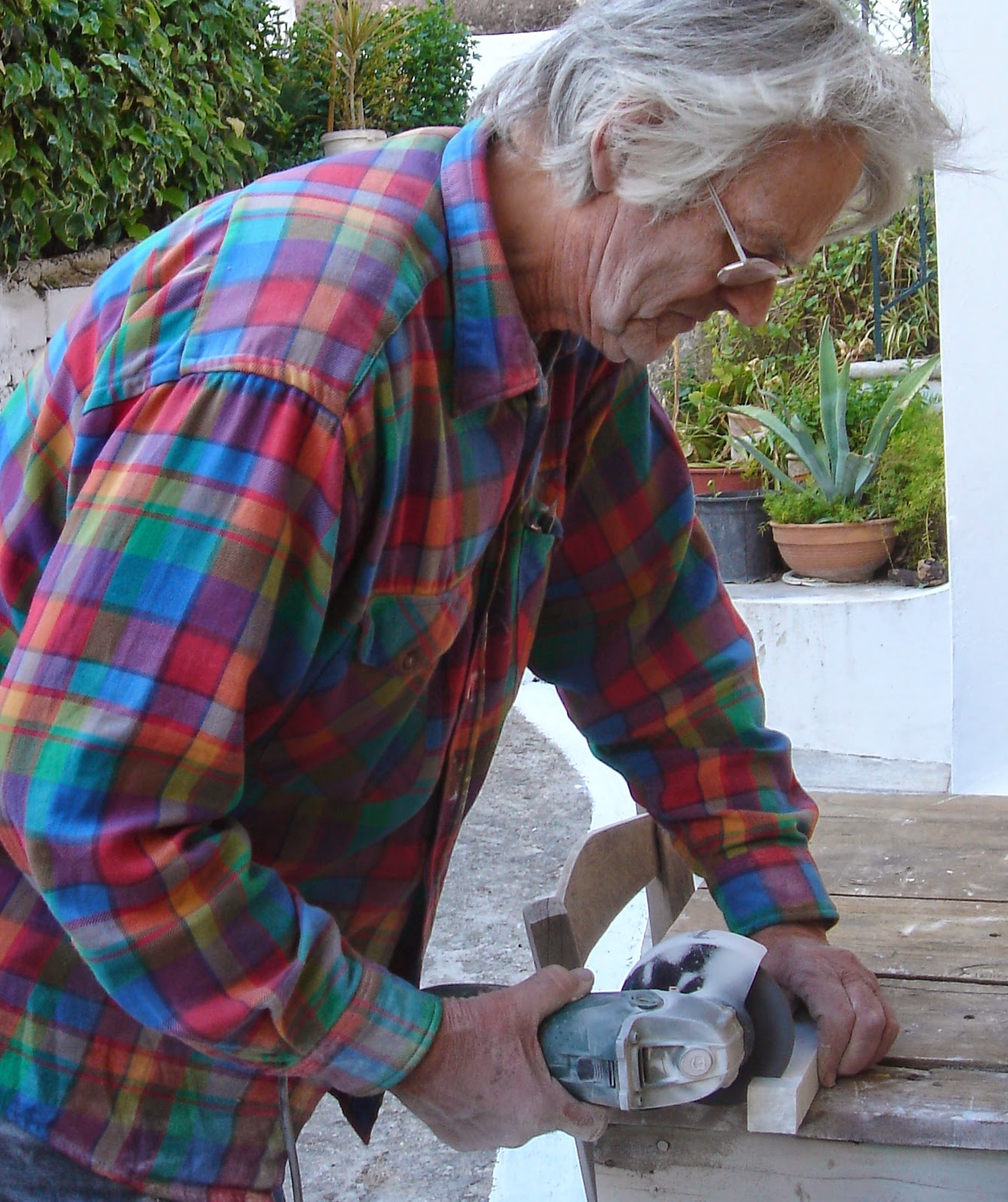 As Easter approaches young Lefteri and his father, Foti, paint asvesti - lime-wash - on the edges of steps to out two houses. That's being done all over the village; all over Greece.
"It's good if the rain holds for three hours!" says Foti
Which it does. The wet grey mix turns dazzling white in a sun burst through the chilly overcast. 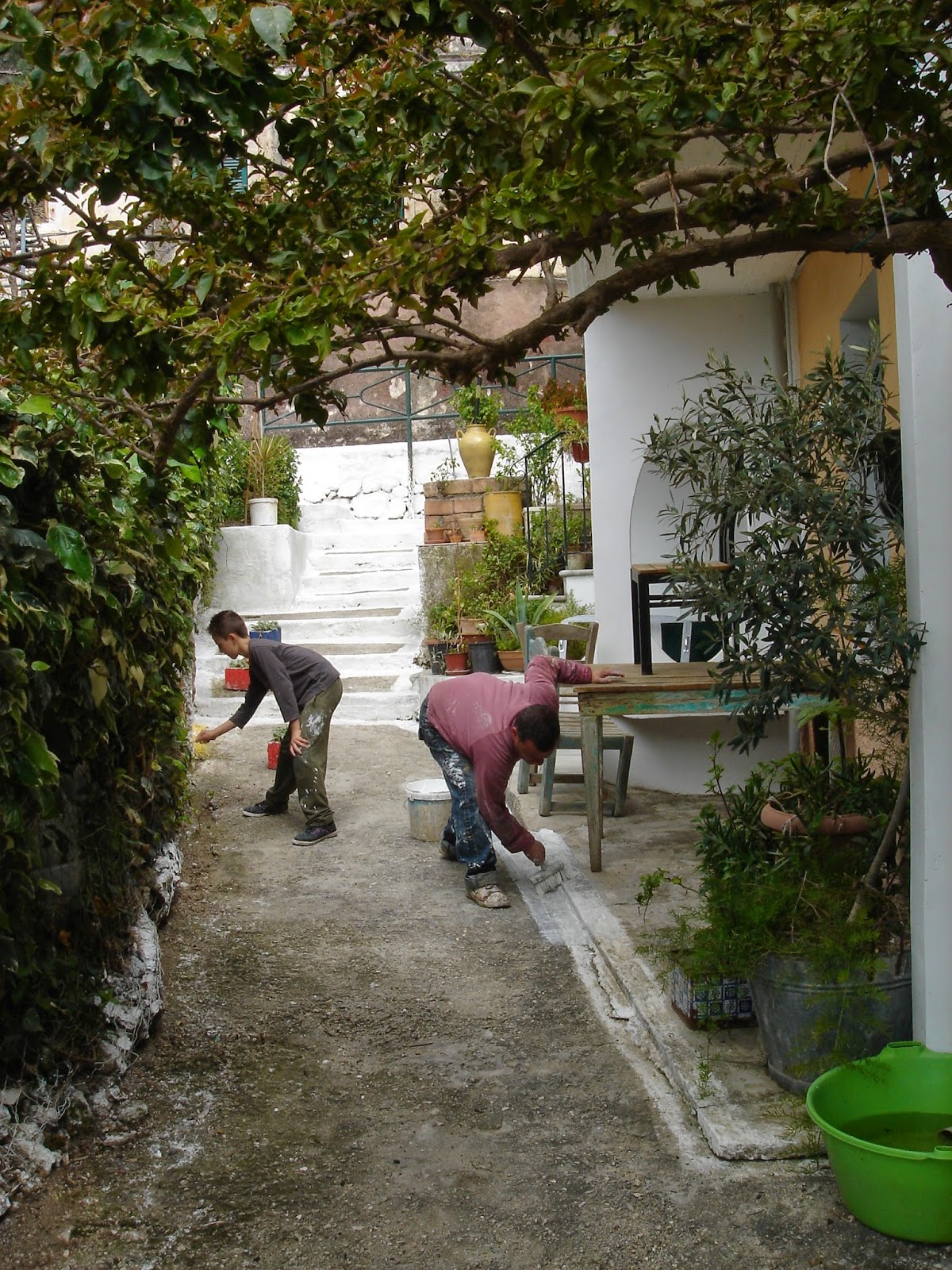 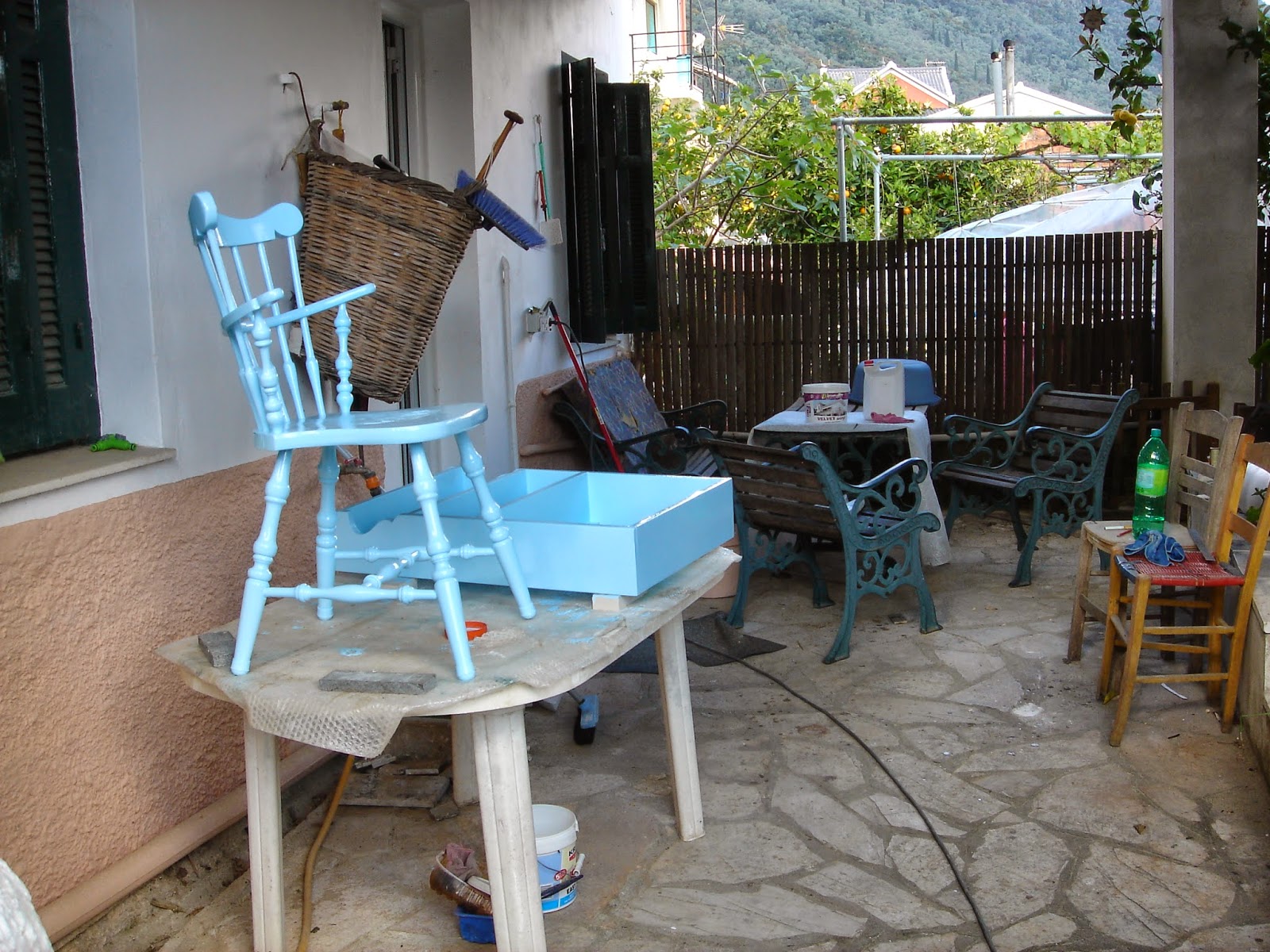 ...and of course that unattractive of old men's attributes - nose hairs - must be plucked. 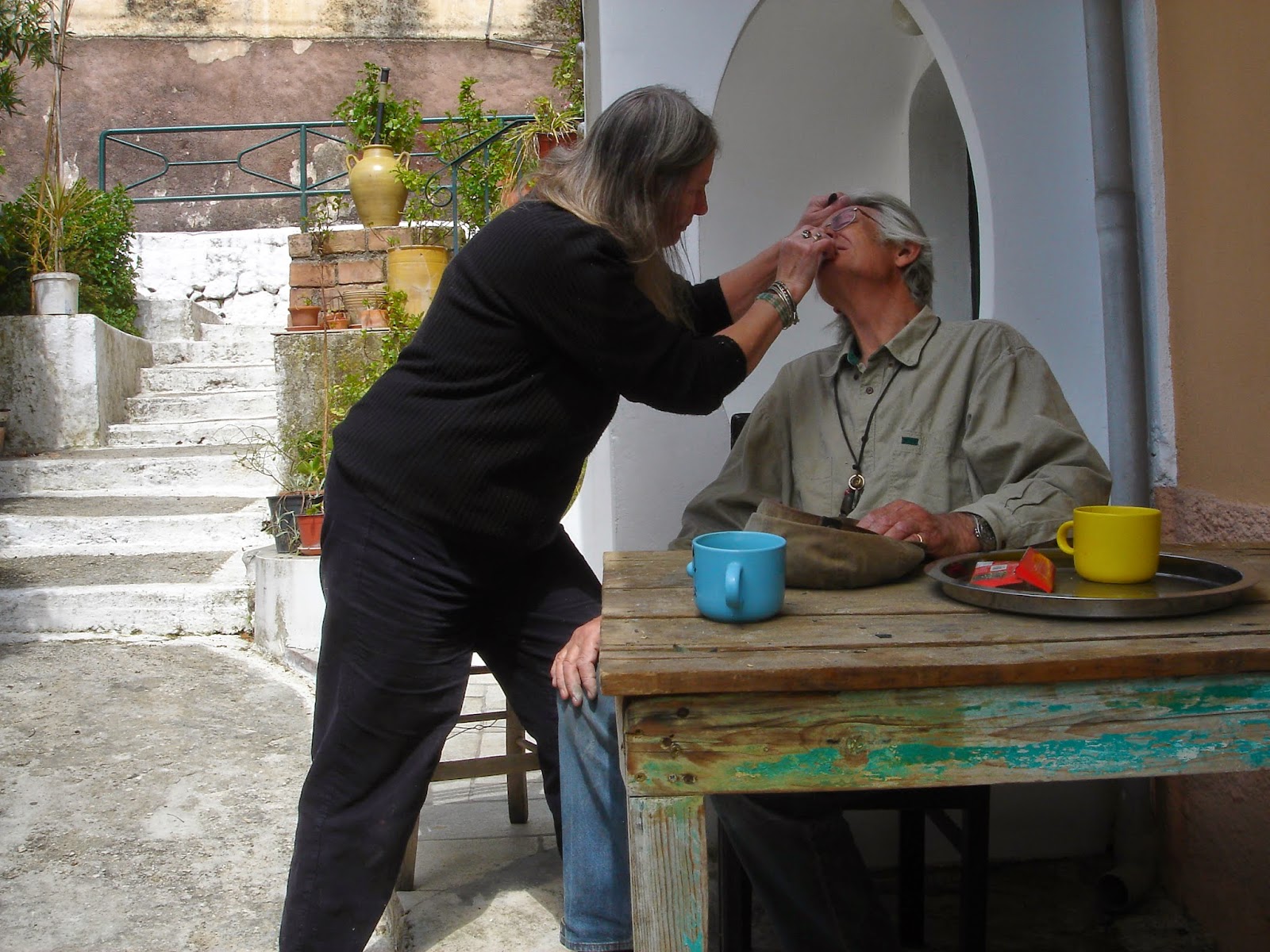