The smell of mildew was increasing inside my smallest shed. Everything is so jumbled up in there, it’s taking me ages simply to assemble the tools I need for a job.
“That shed’s just far too small for everything that's got to go in it”
“But I can’t bring myself to pay for another, Lin. Get rid of the old one? Assemble another? I just haven't the time”
“Suit yourself”
I began emptying everything out. No rain for a while. Things can stay out overnight. It was clear the shed floor and lower planks were sodden; rotten through.
“Just take it all out. Put in a new floor” says Lin
These jobs are such an opportunity to think about other things like, wasn't it around now that Socrates was sentenced to death for corrupting the youth of Athens, or a century and a third since Wordsworth wrote about remembering childhood, and, when I was two, the start of the Battle of Monte Cassino in which our Polish neighbour fought; the monastery - a restored building we glimpsed above us from the back end of a busy fast train from Rome to Bari seven years ago. It was Easter, we couldn't get seats, sat on our suitcases looking out at the passing rails through our carriage's vertical glass back door. It was 15th of March, the Ides, an evening twenty years ago, Jack, my stepfather, died in Dorchester. 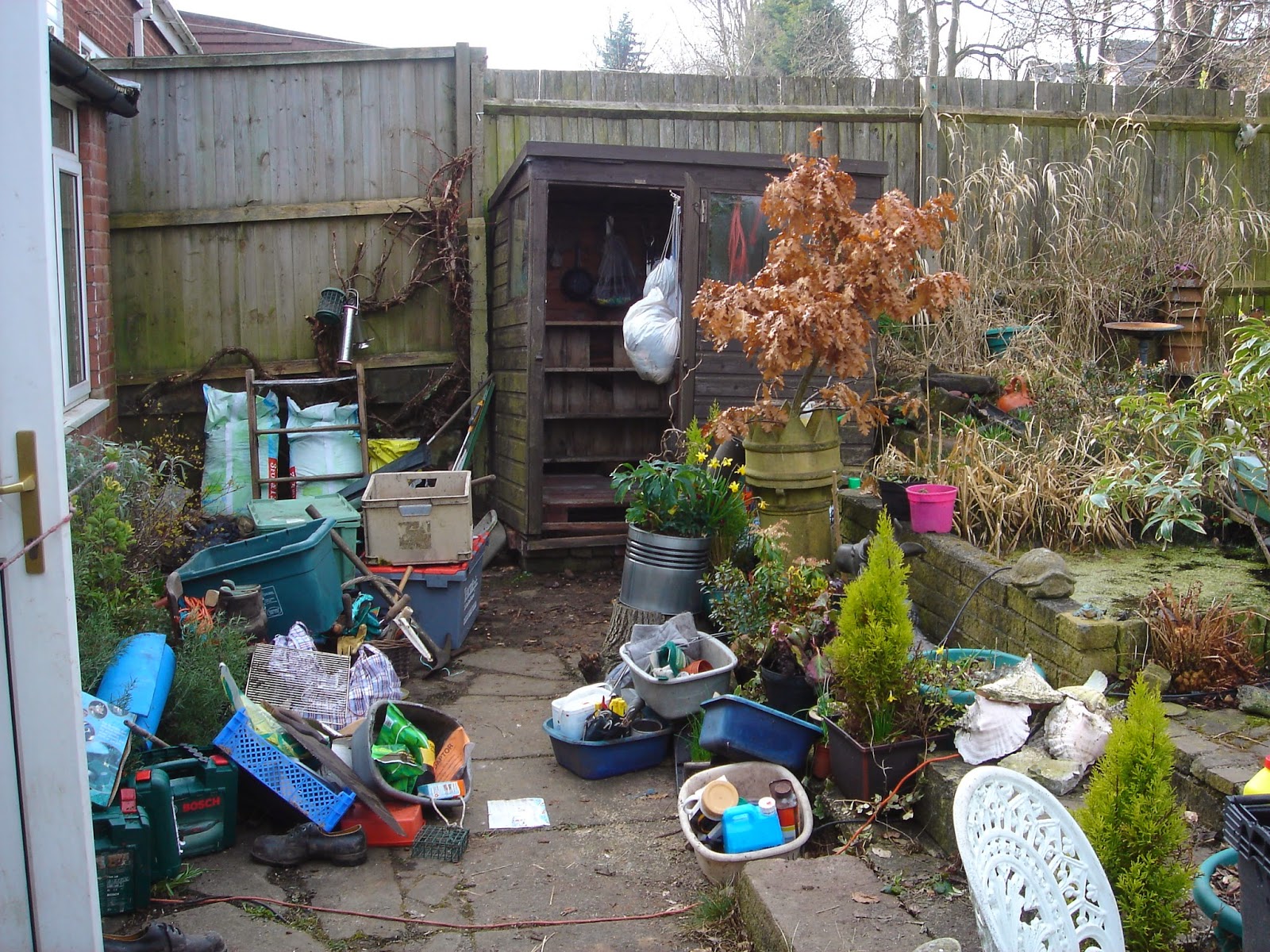 Without thinking how to do it, I set about with my splitting maul, wielding it carefully in the confines of the shed. Bang, bang, bang, bang. Out came a pile of semi-rotted deal to be stacked in a recycling box, followed by four barrows of damp earth gathered from the back of the shed, the main source of damp. I scraped back to the garden wall with a trowel; spread two spare sacks of sand and pebble to cover the mix of brick and slabs on the floor and drove out to my allotment with the HHH van and carried back two hefty pallets that weren’t doing much. One fitted neatly on the gravel. I cut a third off the other with a handsaw and slipped it into the remaining gap, nailing a sheet of roofing felt to the wall struts to cover the gaps at the foot of the shed. The shelves, wiped with bleach, went back in. I began disposing, sorting and restocking the shed. The stuff outside, minus bags of waste, and scrap and excess tools for charity and items for the allotment, begins to go back inside; approaching order of a sort where was confusion. The musty smell is gone, part dispersed by several days without rain. 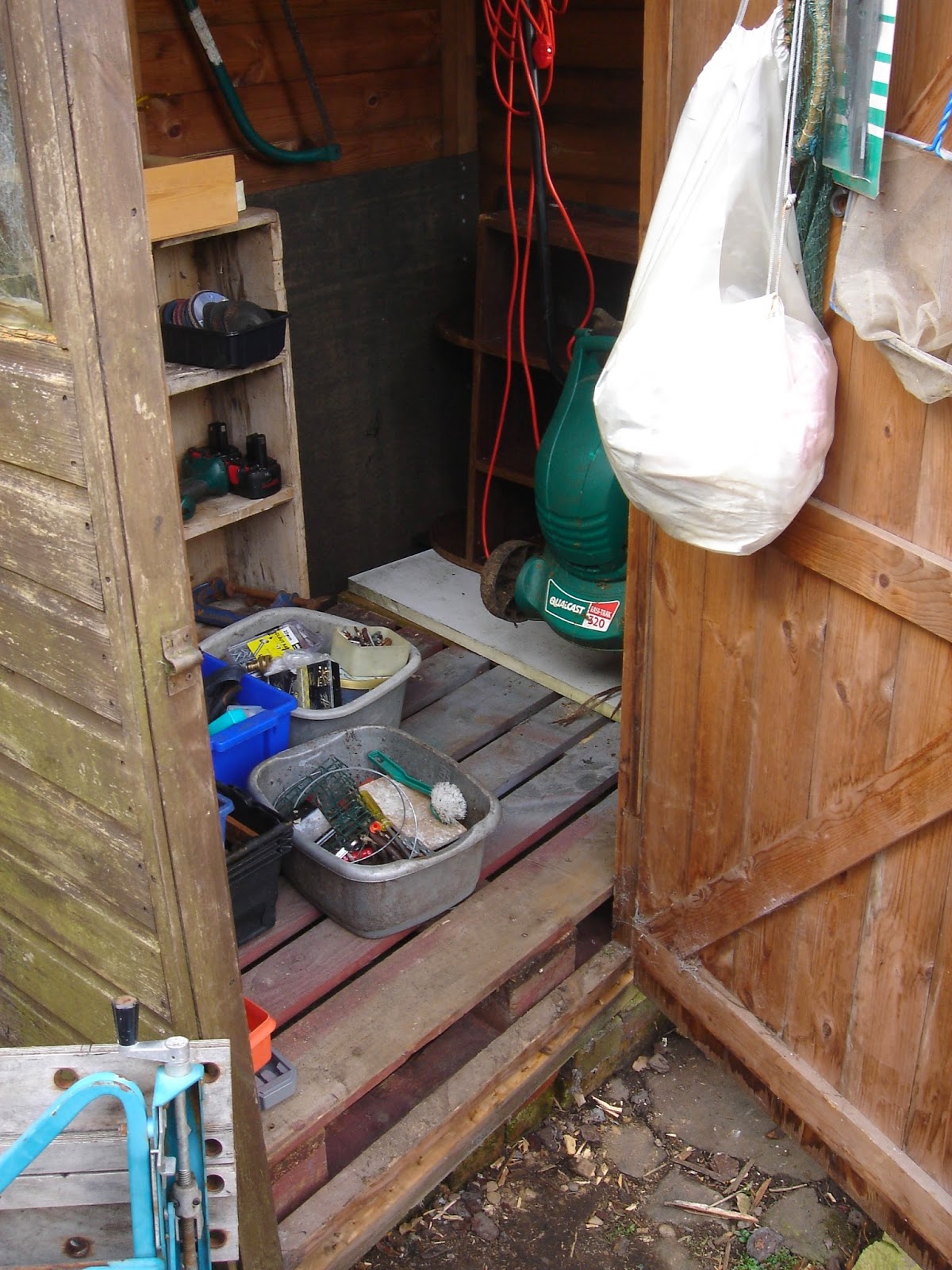 *** *** ***
The Japanese quince in our front garden and the cherry behind it are blossoming. But too many of the front gardens in our street have been cleared for car parking. I pointed out the blossom to Oliver on a babysitting day; also snow drops, crocuses and daffodils. It's O's second spring. I imagine his brain taking photos, embedding colours.
Saturday round teatime. House warm. Amy and Linda chatting. My grandson sleeps on my knee. I fidgeted. He fidgeted and he slept on. What i wonder does he dream in this time when he hardly knows the difference between dreaming and waking and when he wakes cannot tell us what he dreamed. 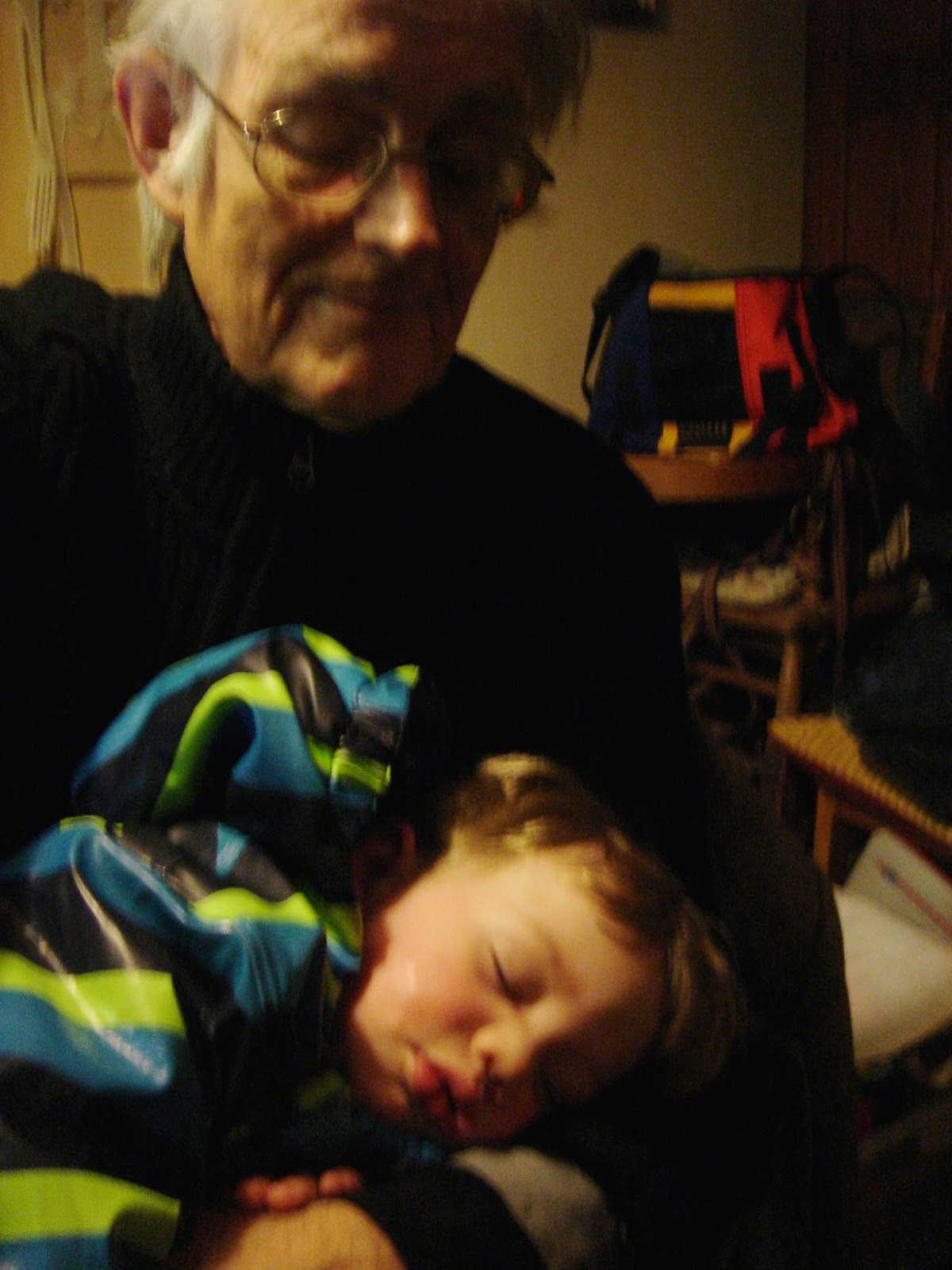 Freud claimed small children dream straightforwardly of the fulfillment of wishes - the 'dream day'. In grown-ups the situation's more confused, their dreams subjected to distortion in the light of common day, disguised by a stew of unconscious impressions and wishes.
When Oliver awoke he cried inconsolably for a while. Neither Linda, his nana, nor our daughter could comfort him. He held out his arms to return to me, where he continued crying. Our Amy said "He often does that when he wakes suddenly."
Was it the abrupt difference between being asleep and awake, or is it teeth coming through? Later I turned on the computer and looked at ourselves in Photo Booth.
*** *** ***
At last I've been able to get out to our allotment. Taj has removed much weed and piled up many stones. I pay him. I value his help even as I know employing him has changed my earlier intention of proving I could do this all myself, saving money.  No question that I'm exemplifying that NHS contention that allotments are a middle-class hobby. My plot is showing earth in marked contrast to my neighbours, one of whom I learn has left while the other has effectively disappeared. The ground is ready for planting; drying swiftly in the sun. 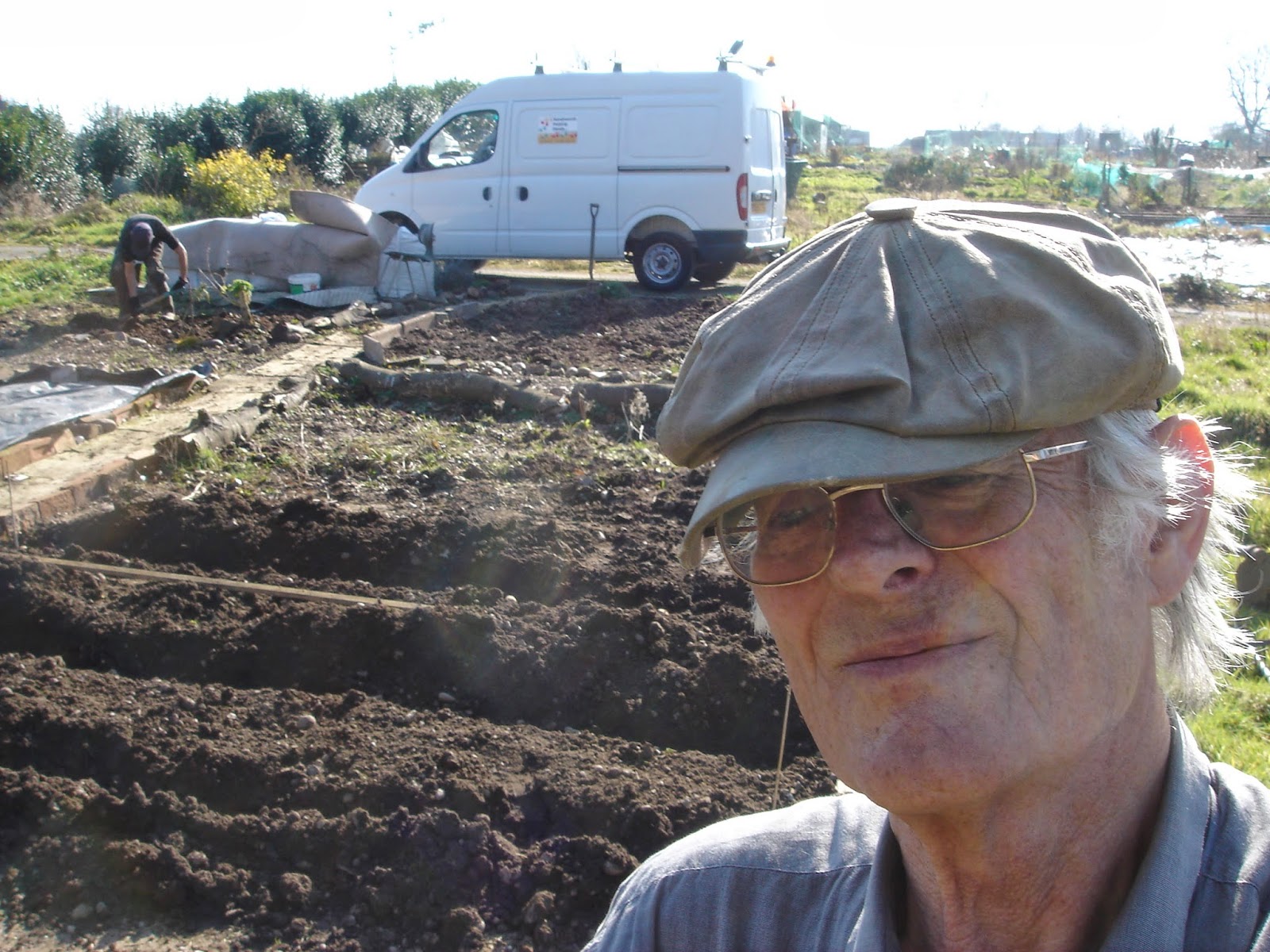 I dug in three rows of first earlies. The little seed spuds were not all chitting. I laid them down about eight to twelve inches apart in rows two feet apart, added some of the topsoil I'd bought last year and raked them over smooth with a bamboo markers at each end of the rows. Sleep now my little spuds and grow. I'll put in more tomorrow.
The HHH van helped me deliver some useful items scavenged by Handsworth Helping Hands, during our last street clearance; things would otherwise have gone to the tip - a bucket, a waste box, shelves and a water butt that just needed a new tap.
I'm becoming more acquainted with rubbish - scrabbling in it, picking it up with gloved hands and spade, grab-n-lift leaf collector. Some trash is easy - already bagged, not too heavy. Most is more intractible - shards of glass mixed into weeds, rotting used nappies in leaking plastic bags, open spilled paint cans, hardened bags of cement and plaster, sodden mattresses, carpet tack strips, innumerable cans, bottles and canisters often still at least half-full of whatever they originally contained, rotting carpets, underlay that falls apart as you try to lift it from the ground, heavy heaps of broken tiles...the list is hardly a start. We're getting better at organising ourselves to collect the variety of mess we encounter - manual collection, digging raking, sweeping...using plastic sacks, boxes, bins, and builder bags, as fits.

Collectively, we're getting better at knowing how to load skips, ensuring they don't overflow or that space is wasted by bad stacking
There are as always toys thrown away or given us as gifts to recycle, redistribute...

**** **** ****
I've begun a thread on the Corfu Grapevine after Amy asked me to do some research into whether she could breast-feed in public in Corfu if she came out to us in October:


Simon Baddeley I saw this on a recent Corfu forum re breast feeding in public here ..."its socially accepted throughout Greece, my partner never had a problem with our little boy when he was feeding last year and the year before..." Is this the case? My daughter requests me to ask on CG about the acceptability of breastfeeding in Corfu. She's thinking of spending some time with us in October. A grand-daughter is due in July. Obviously most of the time Amy could feed the baby at our house but she wouldn't want to be feeding in the loo when we're out. Are there places where it's OK or where it's a 'no-no'? Many thanks for advice. I'm making no judgements. Just need to know. Simon

The pilfering on Saturday of 220 metres of cable connecting the village pumping station to the boreholes at Damari had, by noon on Sunday, deprived the entire village of water. At three on Saturday afternoon the President of the Local Council alerted residents in the affected neighbourhoods to turn off their water. DEYAK (Corfu Municipal Water Supply and Drainage Company) technicians, having been unable to find any problems by digging, found intruders had broken in the door of the pumping station, and rendered it inoperative by cutting and removing all cable. Police arrived shortly after with the DEYAK engineers responsible for assessing damage and restoration - possibly 1 to 2 days.