Making tea on the allotment

I begin to get a sense the soil on Plot 14 is improving. Before Christmas I invested in manure and topsoil. Since then Taj has been helping dig and weed out... 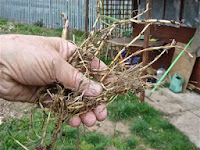 ...the white rhizomes of couch grass that spread just below the surface of the soil, extracting nourishment, we remove by spade and hand; pile at the back of the plot. I'd not pride myself on tilth of the kind you'd find on Vanley's plot, but that's my goal. It's an endless process, made more arduous by the now well known proliferation of stones ... 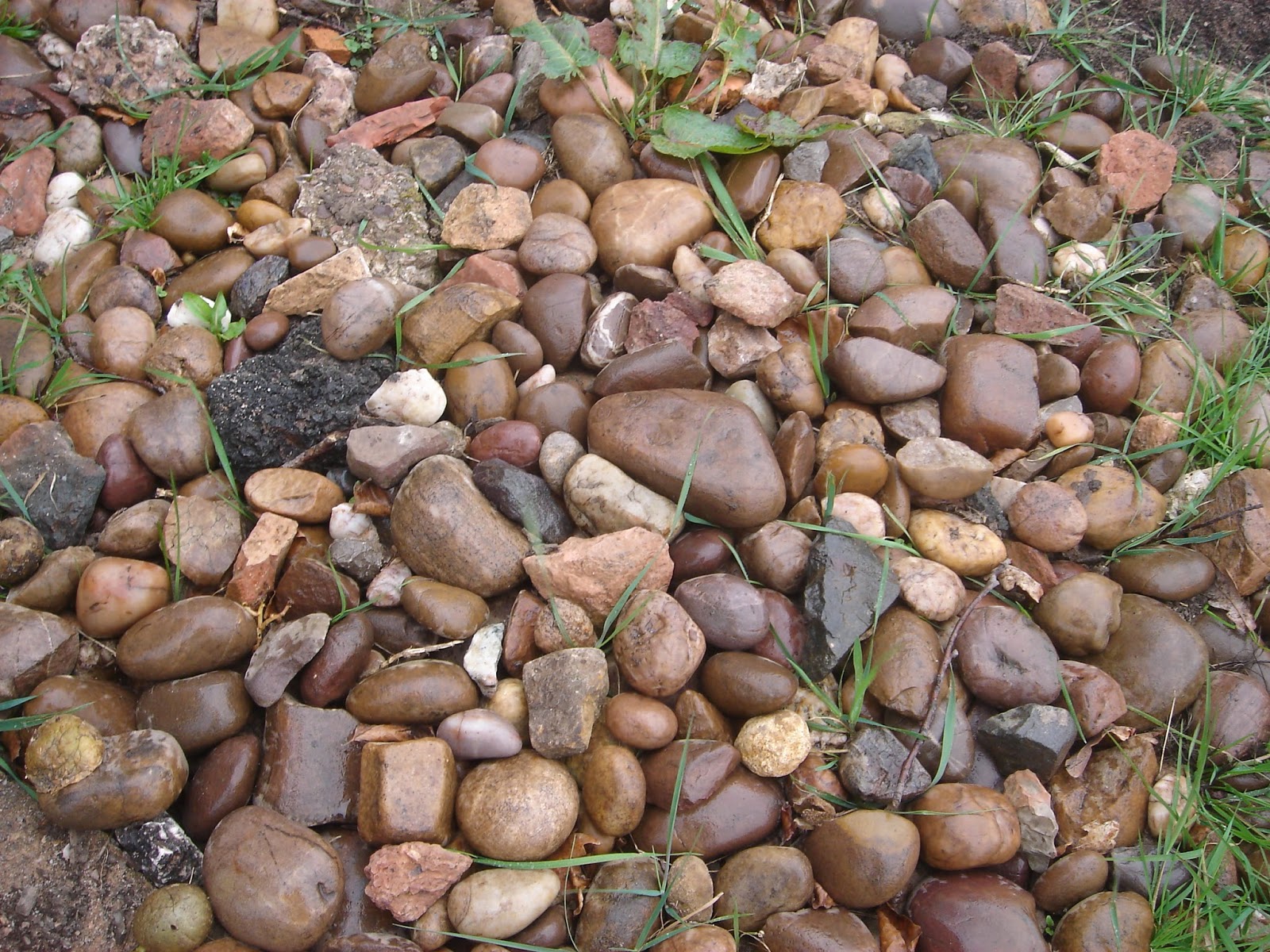 ...on all VJA plots where once a mighty prehistoric river ran under tropical sun. These primordial water-smoothed stones are being extracted and piled up, in some cases used to edge paths. I feel nearly as optimistic with experience as, when, in ignorance, I took on the plot four years ago.
In between, there have been times when I've procrastinated about even going out to the site, though it's hardly five minutes on my bicycle. The other day I brought out a kettle and camping gas stove - the means of making tea on site.

Taj met me. He usually comes on foot, often jogging, but occasionally on his new small bicycle. We continued working. I'd used the Handsworth Helping Hands van to deliver a water butt someone had thrown in one of our street clearance skips. It needed was a tap which I bought on eBay. Hoses are forbidden for watering plots but you're allowed to use them to fill a water butt. Almost surprising  to be thinking about water, given previous weeks of rain, but of a sudden it had become warm and sunny. With the van on the plot we set about clearing and loading up rubbish left by another departing plot holder whose dreams of building a summer house out of old timber had foundered along with the rest of his plans to grow vegetables. With the semi-rotting wood, went sacks of plastic detritus, a rusting water filled tool box, a grimy dented electric kettle (did he think there was power on site?), bottles and cans.
"A cup of tea, Taj?"
"No. I have orange"
The kettle whistled. I applied myself to mug, tea-bag, milk -  in a wine bottle - and sat back in the sun, a bowl of water for Oscar. 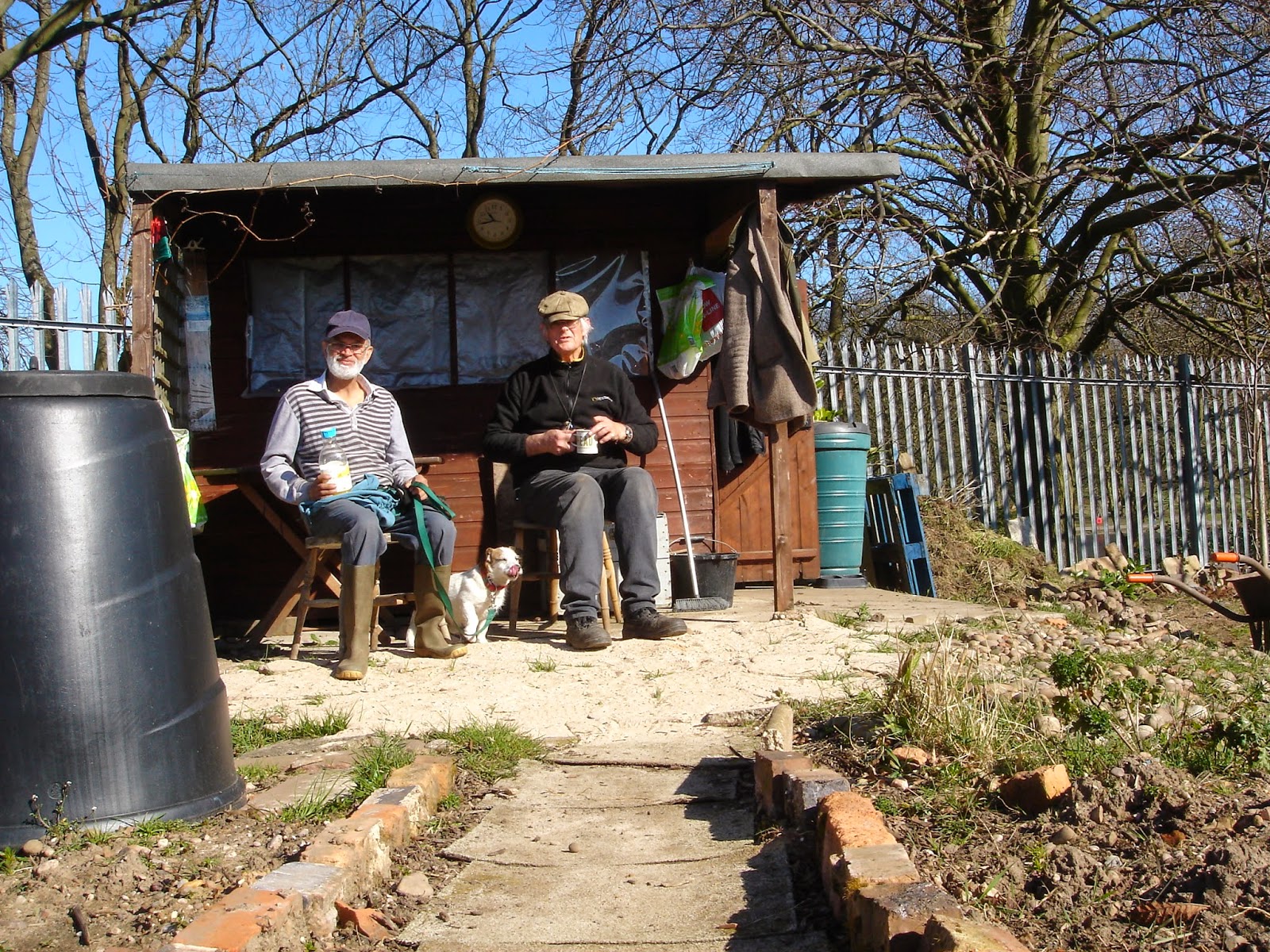 We gazed on the ground in front of us. Taj had been digging at the top of the plot and I at the bottom. More rows of potatoes were in, each nested in a handful of topsoil, beside two rows of onions.
"It's looking good, Taj" 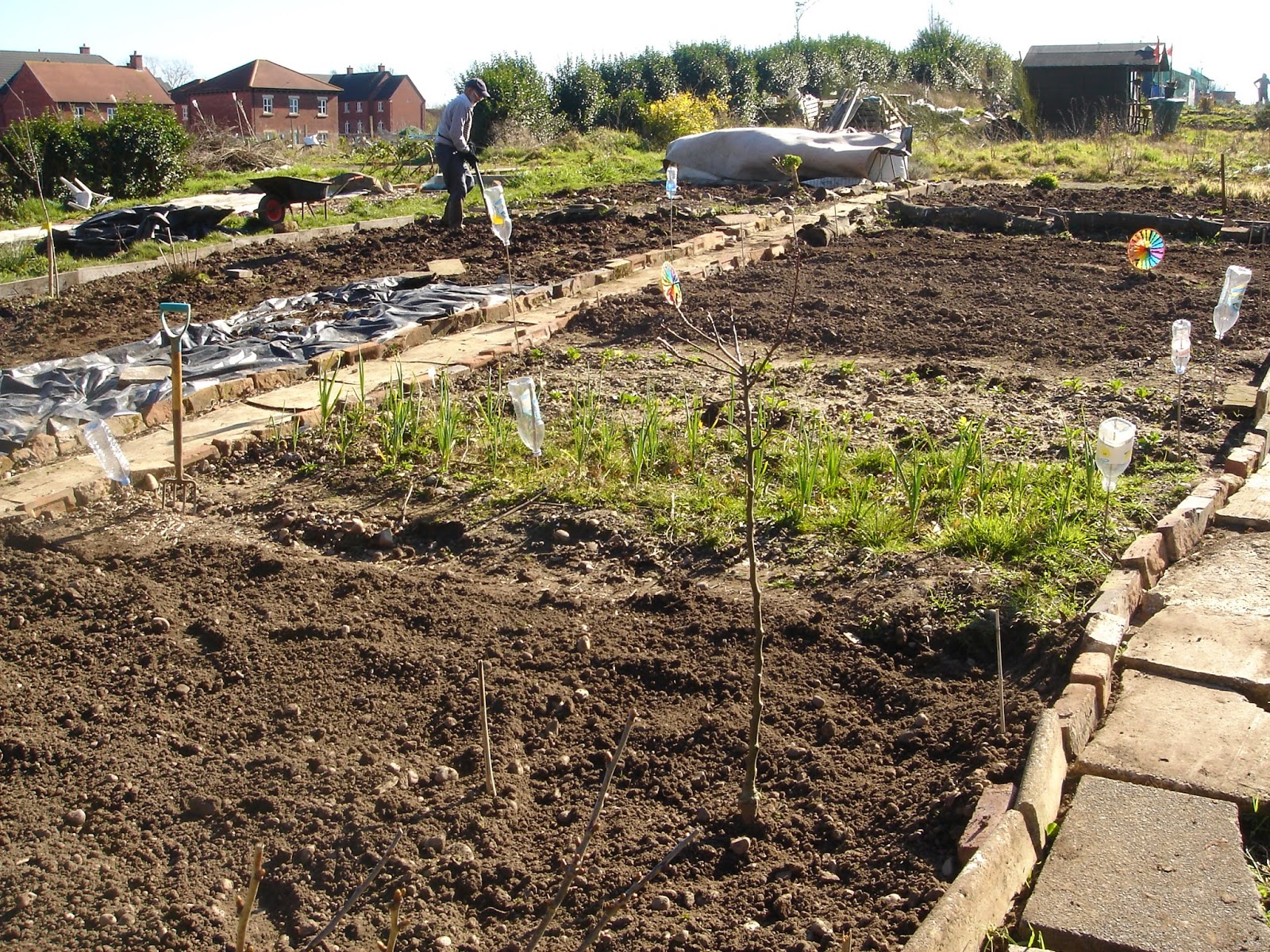 "Now for cabbage, sprouts, cauliflower. But I must find a way to protect the young plants from the pigeons. Bastards!"
We worked until 2.00. I peeled off layers of clothes under the warmth of the sun; had two more breaks for tea and some chocolate fingers, melty. A rhythm of sorts. Taj tidied the paths adding edging bricks and lazying slabs I'd recovered from a skip last year. My broad beans are showing. I'm not sure about the state of the onions that have sprouted. They look the same as they did three months ago. I dug up the last of the Jerusalem artichokes, taking some home for eating, replanting the rest in two rows.
Gill came out to check the beehive she's kept on the plot the last two years. 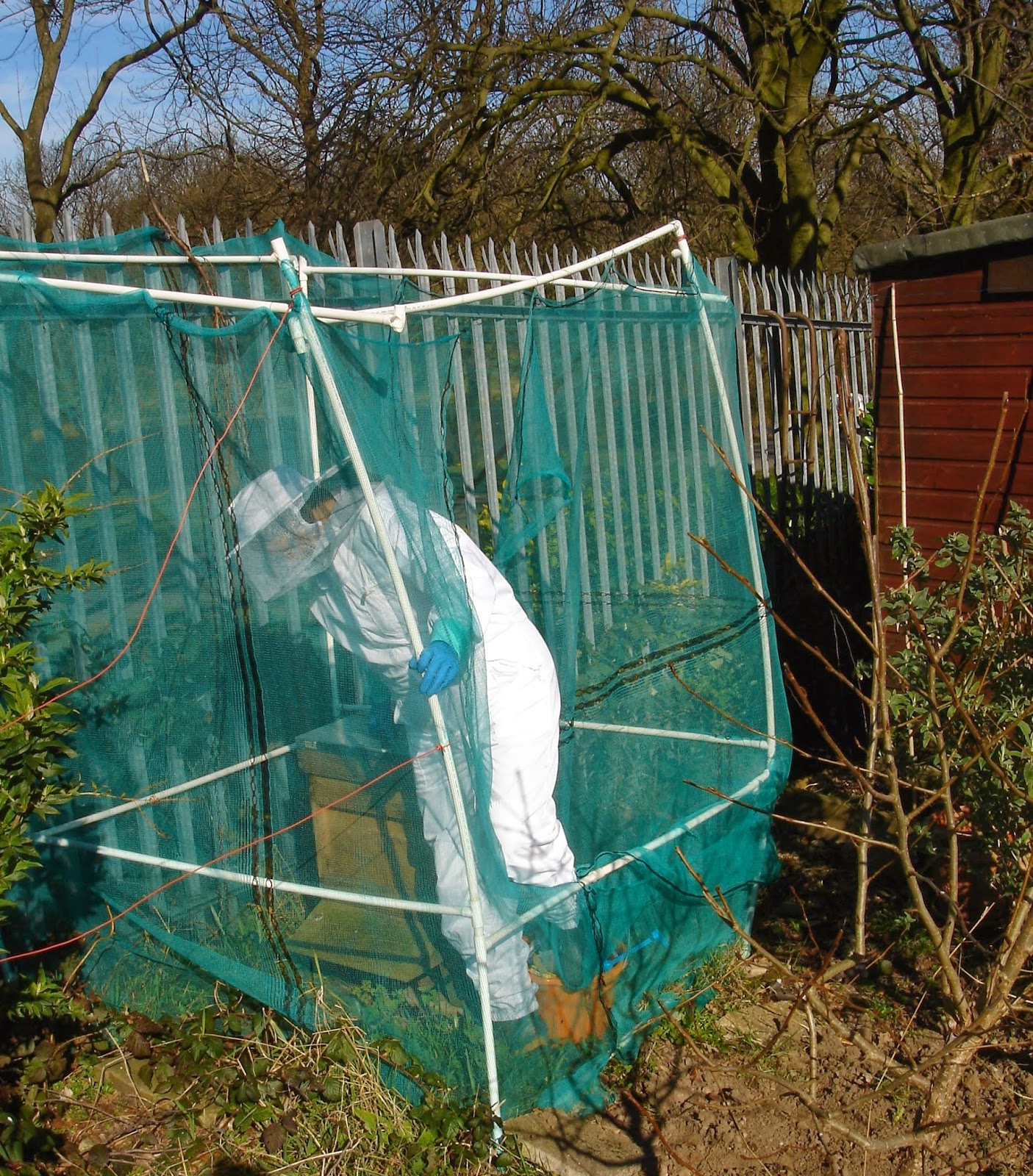 The bees which had lost their queen and died off last winter had made it through this winter, but after Gill had done her inspection she said "They're all dead. I think it's because the weather got better a month or so ago. They started going out. Then we had this rain. Bees hate wet'"
She held up a comb she's taking for analysis. It showed a grey patch like a tumour on an X-ray. "That's the damp patch. They brought in the rain when they returned to the hive"
She'll seek another swarm for April. I said I was going to rebuild the hive's surround; make it less vulnerable to wind.
"It's nothing you're doing wrong, Simon."
*** *** ***
I took Oliver to see the allotment. He wanted to hold Oscar's lead. We processed down our road; I holding Oliver's reins, he led by Oscar, until we got to the VJA site when I let Oliver take over... 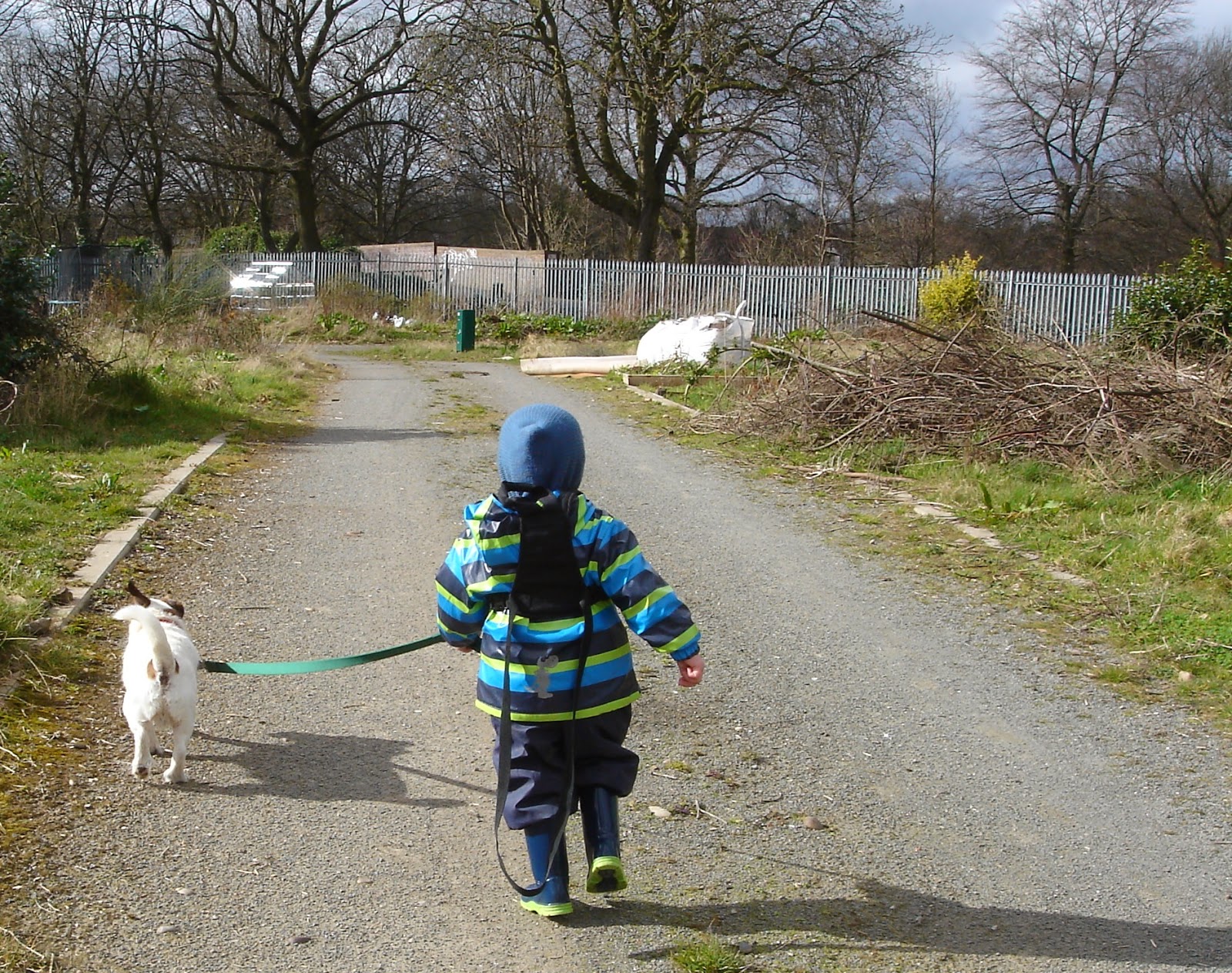 ...watching he didn't snatch at Oscar's lead and that Oscar wasn't going to pull him over, They seemed to have a working relationship.
The departing plot holder next to me, during his 6 month occupation, cropped the hedge that bisects the site - a useful wind break running most of the length of the site. He left the cuttings uncollected.
Allotments demonstrate gaps between between intention and action. Other plots near ours reveal similar chasms. Being more familiar than I was three years ago with the difference between an idea and an action I can sympathise. It would be good to have a successful gardener next to me instead of two more or less fallow plots on either side. Oliver was as intrigued by the shed as I, wanting to shut himself inside, burrowing under the wheel barrow.
I imagine living long enough to ask him if he recalls being in that shed or will he construct his early memories out of grown-ups' anecdotes and images? How much have I've made up the story of my childhood  - 'a sleep and a forgetting'.
Then we walked on to Handsworth Park, having this favourite place almost to ourselves. A sturdy west wind blew down the pond, a calling wind streaming the spring bud willows. Now and then a cloud gap allowed dazzling light onto the ruffled water. 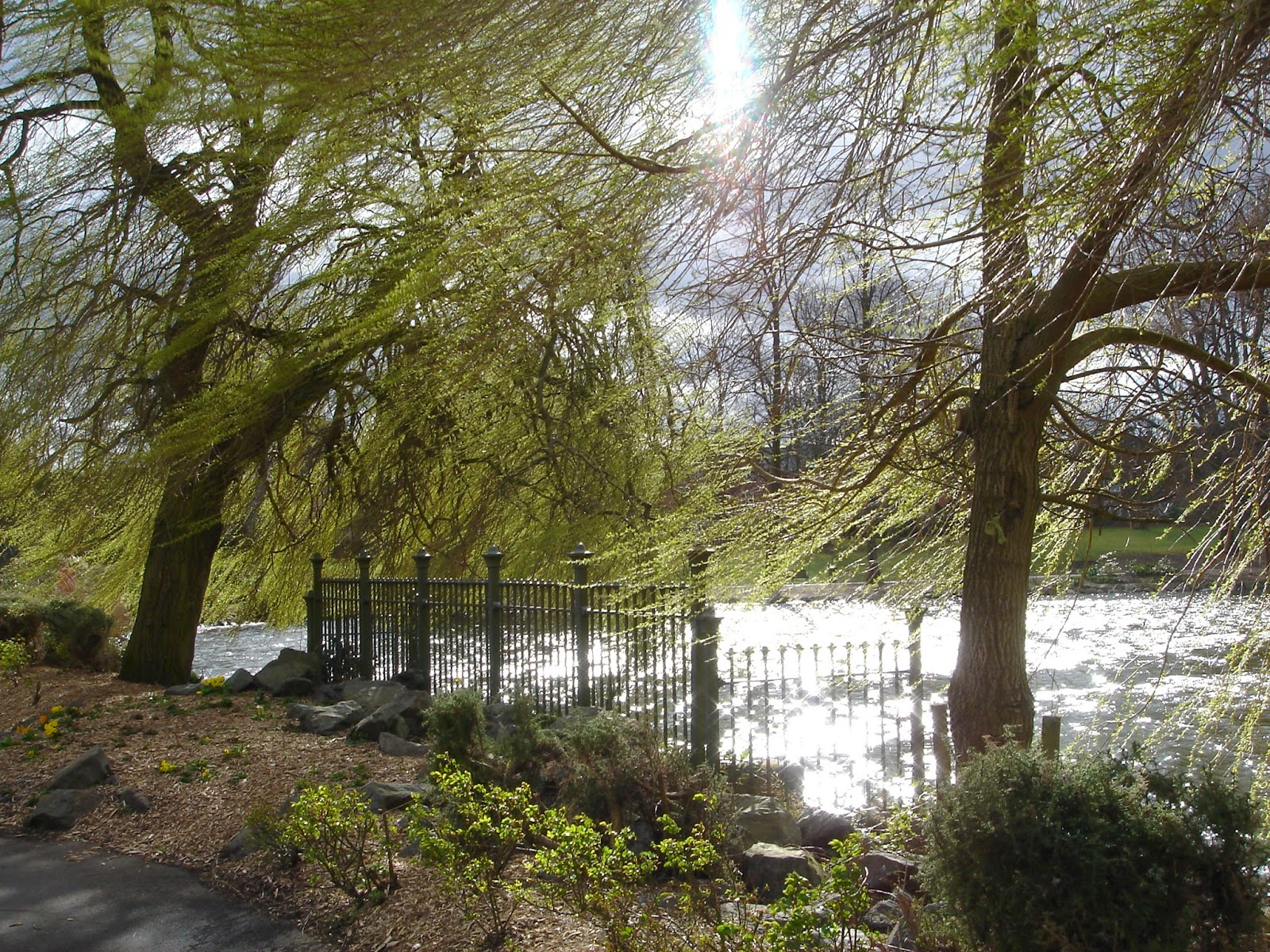 Even I was tired when we finally got home. Oliver sat at our kitchen table, gradually nodding into sleep, a rusk in one hand.
"You and Oscar have worn him out" said Lin 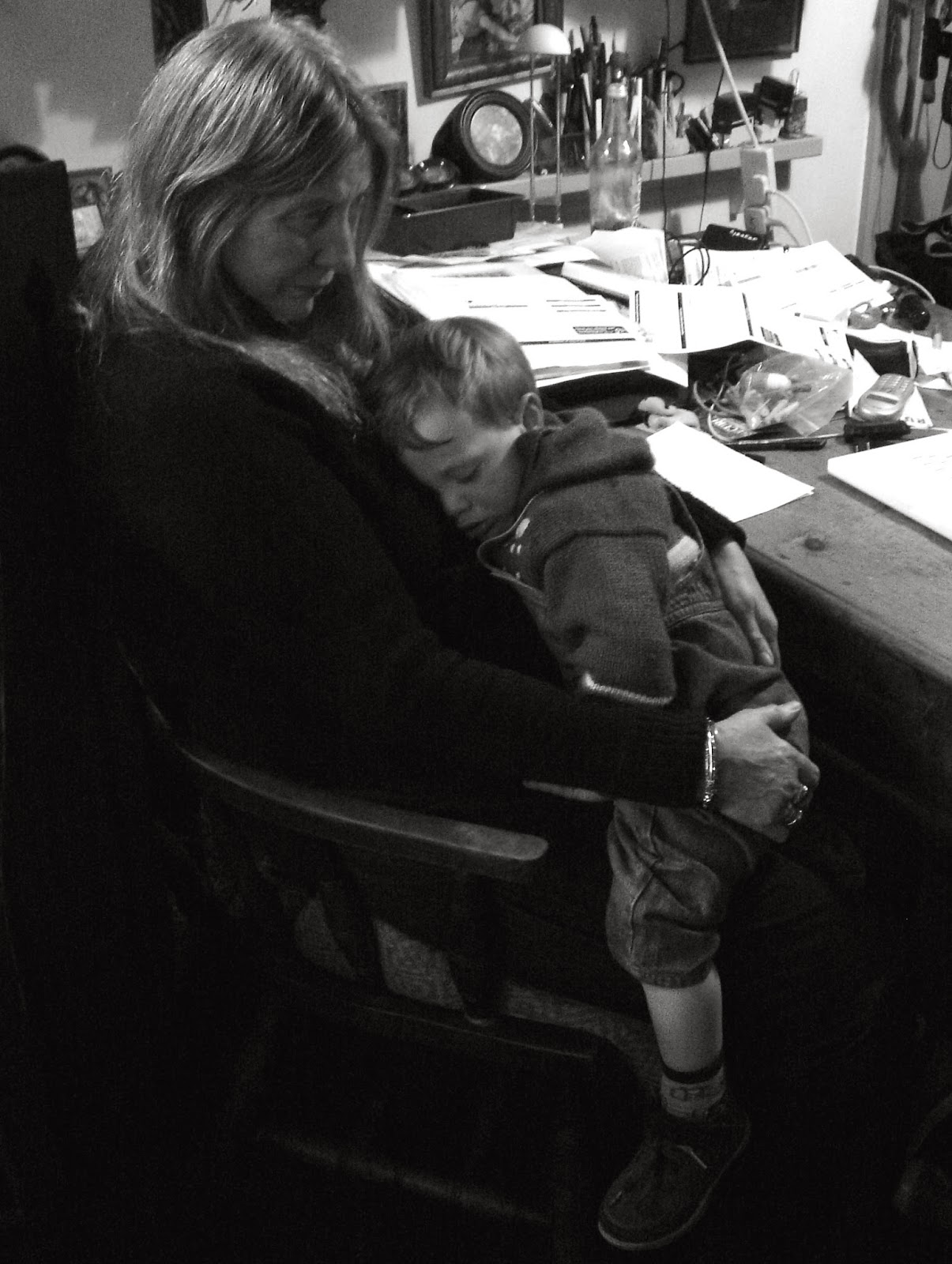 *** *** ***
From New York where they've been in a museum my half-sister Oriana sends me an anticipatory e-card, a wedge of Oldenberg Cake 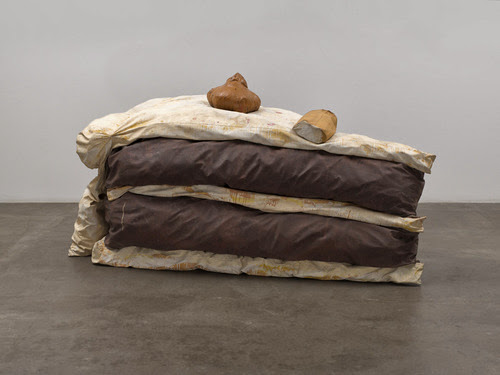 *** *** ***
On Thursday evening I'm taking the minutes for a committee meeting of Handsworth Helping Hands. We're hassled by errands and news of difficulties in other people's lives; a distant friend made blind by a series of strokes; another diagnosed with only months to live; another braving the ordeal of chemo, and a sudden wave of sadness for the absence of my mum. What I meant by a 'calling wind', the way the rushing sound, like a big waterfall, like distant surf, reminds me of other occasions with the same note, seeming to stimulate memory as varnish brings out an oil painting, a fragment of infant sensation when I was preoccupied with the green of the grass around me, happily alone insulated, left to myself, and somewhere a small aeroplane wandering in the sky, a sound undulating with the gusting of wind in the trees, independent of place and time, abrupt, a sound from heaven.

When we in our species' infancy supposed a personal agent, as I'm inclined to even now until thought overrides instinct, so this gusting wind in the trees ...

...that blows the washing dry, that I feel calling was - is - a being, as is the sun rising and setting, and the earth, giving increase.


Dear Simon. As you may be aware, it is INLOGOV’s 50th Anniversary soon and as part of this celebration we are seeking to put together a ’50 Faces of INLOGOV’. This will feature 50 people who have been involved in the life and work  of INLOGOV (both in the past and present) over the last 50 years.  We would very much like to have you as one of our 50 Faces and I am writing to enquire whether you would be willing to be featured?
We are aiming to put together some information together about each person and I if you would like to be featured, please could provide me with the following information to use in this context:-
1)      Two/three sentences to describe your current role/career
2)      Two/three sentences on how being involved in INLOGOV as a student, staff member, client etc has helped you
If you have any queries, please do not hesitate to contact me in the first instance.
Kind regards, Rachael 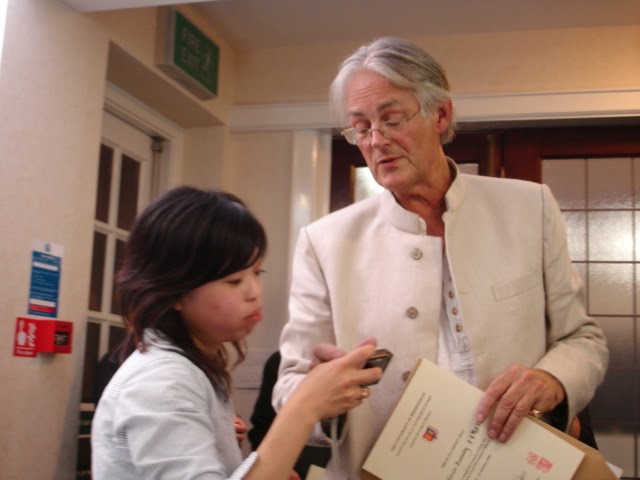 Dear Rachael, I hope this will do. Let me know this has arrived and if Catherine would like it modified - with subtractions or additions.

Inlogov is a gateway to a world that’s engaged me for forty years. Despite intense pressures – political and financial – I’ve been allowed to remain an ‘amateur’, encouraged, by successive directors and invaluable colleagues, to balance writing, research and face-to-face training and development with practitioners, never having to put an academic career ahead of a shared fascination with studying, supporting and working with local government practitioners. In retreat from campus I remain a community activist with enough experience of government to make trouble in sensible ways.

2) Two/three sentences on how being involved in INLOGOV as a student, staff member, client etc has helped you

I’ve been a tourist in my own land; finding routes by train, ferry and bicycle to seminars and consultancies between Kirkwall and Newquay, Barnsley and Greenwich, roaming deep countryside and mean city streets, working with all flavours of councillors and the diverse professions that strive to serve them. My research focus - a thirty year preoccupation - has involved capturing on video, with their permission, the conversations of members and managers at the source of tension between politics and administration where government is made. The institute's international reach has brought invitations to assist in the same exploration in Canada, Japan, Australia, New Zealand and Scandinavia.

I attach a pictures that is reasonably flattering: