Compost lunacy! I've learned from various sources in our local council that staff have been told to stop composting fallen leaves in city parks as a rich source of humus for suppressing weeds and enriching soil, with occasional surplus being brought to nearby allotments. In future all a park's potential compost will be taken to the local waste depot...
...often several miles away, where Birmingham City Council pays a private contractor to remove it. That company will compost the leaves that fall in the parks. Green waste previously generated and used as compost inside a specific park will now have to be removed from that park purchased back from the contractor. This probably means that the council will not pay for any compost at all. We shall live with the consequence of that interruption of a natural and local cycle; from green leaves on trees and shrubs and plants, and grass cuttings, to the rich fertiliser that helps them thrive the following year. I avow the verity of this daft logic. I learned about this accountant-driven erosion of the principles of sustainability, after, I, as a representative of the committee of Handsworth Helping Hands, was encouraged to explore our voluntary group's involvement in 'community composting'. We're anticipating more abandoned domestic green waste now that citizens must pay £35 per annum to continue a service previously covered by their council tax.

*** *** ***
Love is powerful; so's hate. Both use the sleep of reason to create seamless narratives. 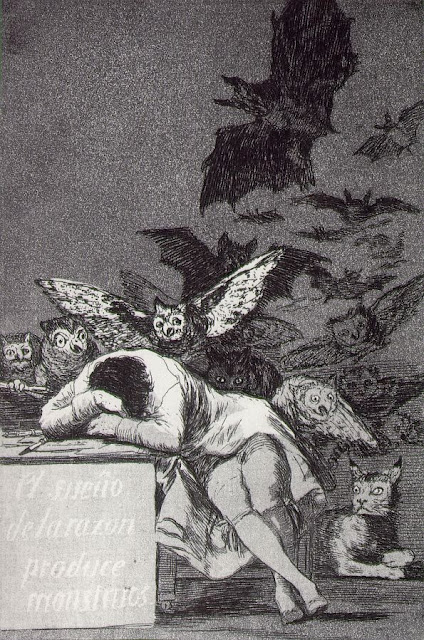 Love conquers all because it’s invulnerable to reasoned rebuttal; so's hate. Beware of the self-serving story that contains no doubt – take the film by Jim Bruce ‘Money for nothing – Inside the Federal Reserve’ which blames the sub-prime mortgage crisis on government, most specifically the US Federal Reserve system. Don’t I recall Hurricane Katrina and its aftermath, in failed government, as the catastrophe's precipitant?
An expert on the history of the Federal Reserve (a mechanism explained to me two years ago by my old friend and guest in Ano Korakiana, Tony Scoville - "oh that you had such a mechanism in Europe!") wrote a piece - 'They Hate the Fed'. Roger Lowenstein says the film espouses the grand villain theory of catastrophe, rather than a less gripping story of many causes (Once upon a time vs. once upon several occasions?), indicting Alan Greenspan and Ben Bernanke...
...for the Fed’s policy of low interest rates which induced speculation. Don’t blame liar loans and reckless traders, argues the carefully edited documentary, they were merely responding rationally to Fed policy. The film adroitly rejigs a private market failure and presents it - seamlessly - as a failure of government. More likely, the disastrous rescue operations that followed Katrina were informed by a Darwinian retreat from duties of central government to intervene decisively on behalf of vulnerable citizens of New Orleans after the great tempest. Government action to ban risky mortgages might have averted the sub-prime mortgage crisis – ‘in other words’ writes Lowenstein ‘the problem wasn’t too much government, it was too little; regulation was woefully deficient’. I’d agree, but the real interest of this story is its demonstration of seamless narratives to propogate a ‘grand villain’ ideology. This would apply at any extreme of the political spectrum. In this case it’s a shrewd way to dismiss complexity, to dismiss the notion that the economic catastrophe we now experience and for whom I have to resist the temptation to seek one feckless clump of rogues had many causes including Lowenstein’s list:

*** *** ***
There are enough children in the village now for a decision to have a second kindergarten teacher.

(My translation) The small pupils of Kindergarten Korakiana enact the musical tale The unsmiling State* tonight - 20.12.13.. Our kindergarten room was filled with the parents and relatives (mostly grandparents) of the young children, who, disguised as goblins and poppies "gave all". At the end of the tale, Santa Claus distributed gifts to the children, while everyone looked forward to a small buffet prepared by the mothers of the young pupils...The relative numbers of children is bringing our village an upgrade to an all-day kindergarten (from the start of the new year we expect a second kindergarten teacher). This, combined with the quality of kindergarten teachers (current and past),, promises well, we believe, for the future. 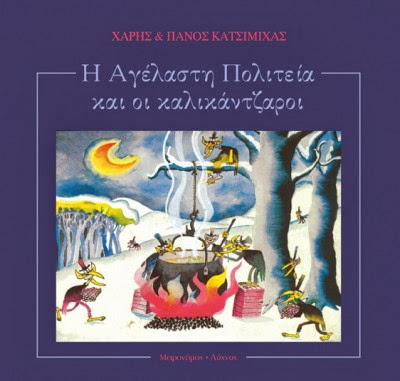 I wish I could tell this story to Oliver but he's more into touching and looking than following a narrative in any language. He and I play with books but I look forward to when we can read together.
Days merge into days. It's mid-Winter. The longest night. Greece seems as far as I want it to be; as I want her to be always, as far as when, on my own, I first travelled there by train fifty five years ago; four days by train with three days in Venice on the way, then on through the Balkans via Belgrade in the middle of the night to Thessaloniki, Larisa and Athens in the morning - following the historical routes on the map I went on a standard train from London to Paris. I must have taken the métro from Gare du Nord to Gare de Lyon where, around midnight, I caught the Simplon-Orient Express. I'd still travel that way had not air travel ravaged the railway. In 1957 train travel was so normal, it seemed effortless, yet exciting. From Venice I took a standard train through what was still, and for a good long time yet, Yugoslavia, travelling via Belgrade to Athens - a two day journey. Such a travelling adventure is impossible today. Even were I able to buy tickets for the heritage version of a journey on the Simplon-Orient Express, it's the last thing I'd desire. 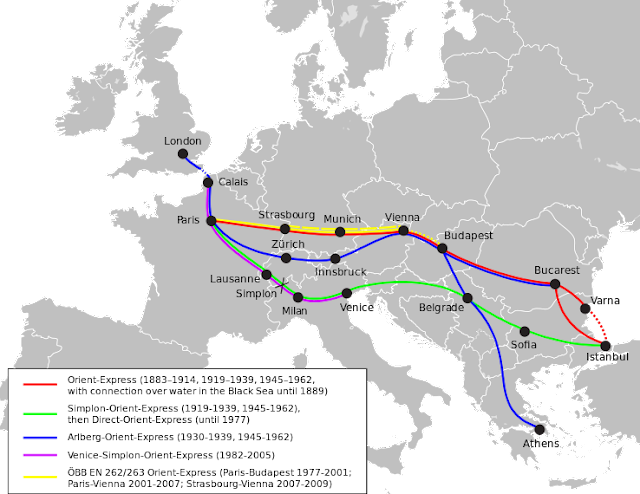 I freely roamed the centre of Athens returning to my family staying in Kolonaki, I living in a single bed flat loaned by a Greek cousin for a two week stay engraved in memory...

How wonderful if there were a waterway with a tow path, but for the channel at Dover, that stretches to the Black Forest to join the great Danube  - the Donau, Dunaj, Duna, Dunav, turning south somewhere before it becomes the Dunǎrea, and my route drives through Bulgaria southward to the Aegean. Our canals wind far and wide. I use a tiny section for my journey's in and out of the centre of Birmingham. Oscar and I enjoy them as, carried to the towpath in the basket on the front of my Brompton, he can run with me clear of traffic danger. The other evening after a visit to the Christmas market to enjoy a mulled cider and a lemon and sugar crêpe, I headed down to the Birmingham mainline that runs westward from the city beside the west coast railway and city trains to Wolverhampton. The wind was blowing wet and almost warm. Well clothed against the driven rain I sped through a succession of long puddles, the ruffled surface of the canal reflecting yellow lights from flats and street...

...until under the Ladywood Middleway dual carriageway my way turns darker, Oscar, a dashing smudge in the gloom, now and then a lighted train rushing by in and out of the city. When I'm on one of those trains I peer down through my window watching for a version of myself pedalling below, getting dressed for cycling when I step onto the platform at New Street, ready to head home on the route I've been scanning from the train.
Earlier in the week I was again in London delivering Christmas presents for relatives in the middle of town gazing like a tourist at Katharina Fritsch's blue cockerel on the fourth plinth in Trafalgar Square... 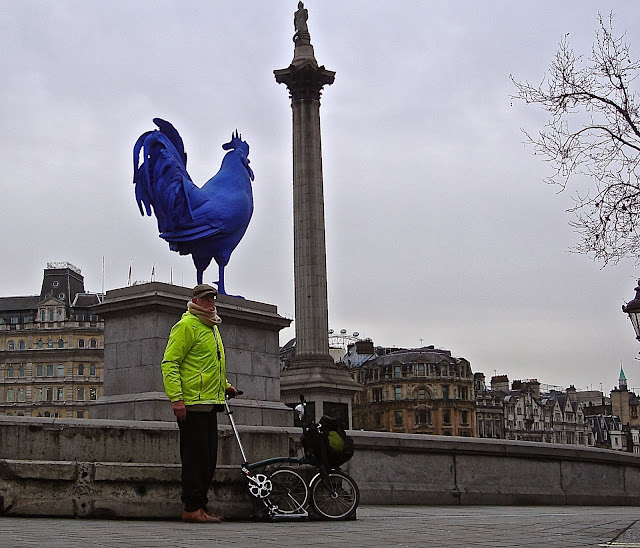 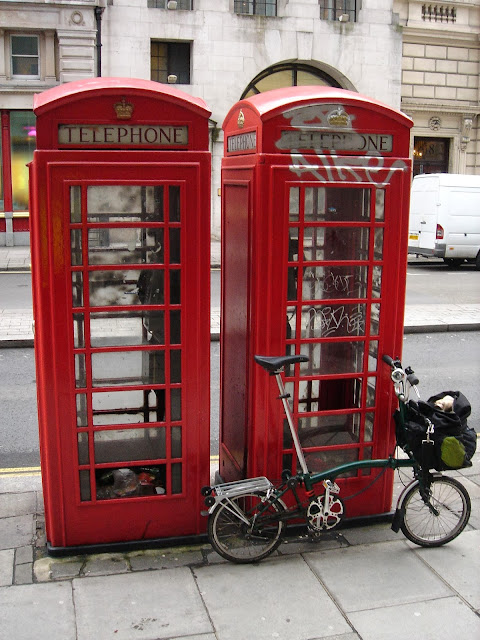 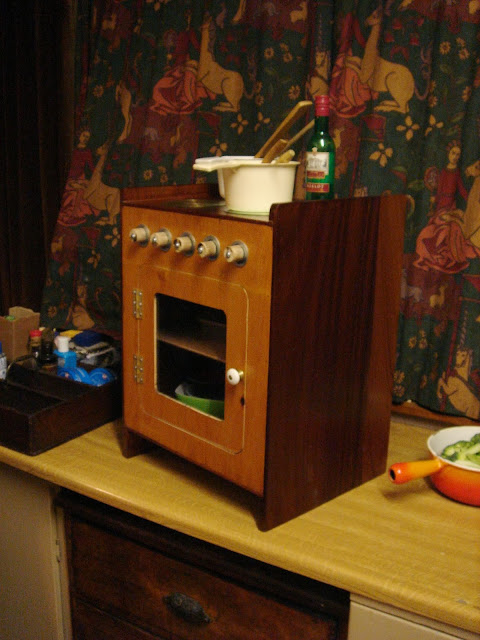 I got all the bits and pieces from a new ironmonger on Lozell's Road, most of the small items likes hinges, catches, nuts and bolts difficult to find outside a big-box suburban DIY store. 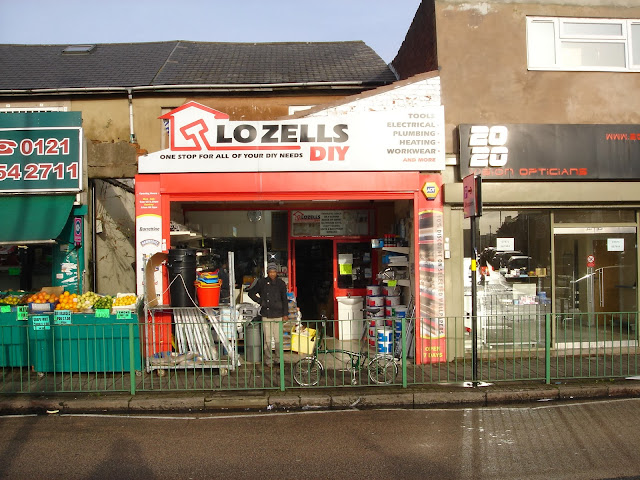 Lin at the kitchen table is surrounded by papers as she finishes our tax returns on-line as I feed her receipts for sundry paid activities in 2012-13. 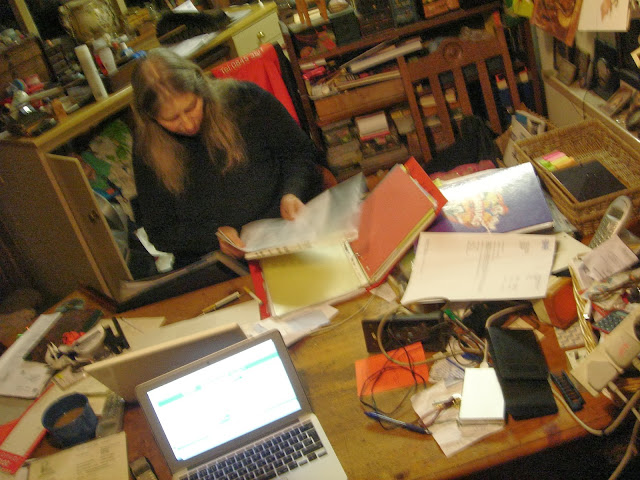