A memory in black and white

Our Christmas card was posted on the Ano Korakiana website... 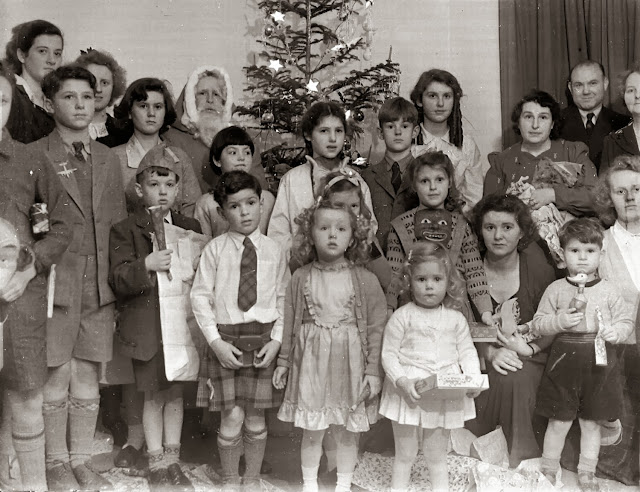 Victorian aristocracy, including the Queen herself, embraced the Scottish landscape - thanks in part to the new railway. Dr Johnson was more critical. But he and Boswell travelled to the Hebrides before Romanticism trained the lowland eye to delight in highland scenery and railways made them easy to visit from the cities of the south. It was depicted as a wild heather-strewn wilderness. In fact it's an enormous park, stocked with ornamental fauna to shoot, paint or photograph; and now every track that doesn't pass under Forestry Commission plantations can be viewed from the air via Google maps. Does this make me love it less?
I'm not an explorer here, more a traveller, even a life-long tourist, inheriting the safety of the land's long habitation by people who made roads and place markers for centuries before the Victorians, let alone me, coming first to the Highlands in 1949 on the sleeper from King's Cross to spend Easter with my aunt at Fasnakyle, her home beyond Cannich, in Glen Affric, and later to celebrate a magical Christmas (in this photo I found at Am Baile, Bay and I are in the middle row, left and right of the tree - Bay just in front of Father Christmas).
My aunt had hired a film projector and we all sat down to watch Charlie Chaplin and Laurel and Hardy. We and the rest of the children were laughing so loud and so continuously, one or two little ones had to disappear to be sick before rejoining the general hilarity. (It's so good to have help identifying the others in the picture and hoping they also remember all that laughing at slapstick custard pies and silly walks from so long ago). Then Father Christmas - the estate's head ghillie (I believe), I was told years later when I no longer entirely believed in Santa Claus, arrived - and presents were handed out to all after which my aunt organised us to have a group photo with many calls to settle down and look serious just for the camera. This is why we show little sign of the excitement and joy that suffused us. I know I was fit to burst - needing one titter to set me off again.
The human past is part of the area's character - kingdoms, invasions, depravity and civilisation, even where the rigour of the landscape suggests wilderness, anyone with a little thought can see there's more wilderness in the blighted estates of our population-diminished cities than in this sublimely landscaped garden for the enjoyment of those with time to spare, good raincoats and midge repellent. It's true that in the depth of raw winter you're sensible, if stuck somewhere on a drifted road, to have a care to stay in your car and phone the rescue services

Quote from Am Baile: This is a Christmas party held at Fasnakyle House in the early 1950s for the children of employees on the Fasnakyle estate, Strathglass. The estate was owned at the time by Captain Clark. Four members of the Mitchell family have recently been identified in the photograph - Marcelle Mitchell and three of her daughters, Monique, Christine, and Lesley. Marcelle is the lady kneeling beside the little boy on the right hand side of the photograph. Monique is standing near the back, next to Father Christmas. Christine is in the second row. (She has a ribbon in her hair and her face is half hidden by the girl in front.) Lesley is the small blond girl in the front row, holding a present. The girls' father, Mr. William Mitchell B.E.M., was the General Foreman for Messrs John Cochrane & Sons, Ltd, the company who built the Hydro Electric dam in Glen Affric. A fourth sister, Lyn, was born in 1952.


“Also in this picture are Margaret and Kenneth MacLennan, family of John MacLennan, (Johnny to guests, Jock to natives), who was head stalker at Fasnakyle. He succeeded his father, also John, to this position in l941.
Kenny is the little boy (2nd, front row, left, holding his present), he still lives
nearby on estate with his wife and family. Margaret (1st back row, left) has
married and moved away. Their mother Mary was caretaker for Fasnakyle Lodge. Beside Margaret is Lily Henderson whose sister Cathy is (2nd row right,
kneeling, nearly out of picture). Their father, James Henderson, also a stalker,
worked and lived on Fasnakyle Estate.


Dear Mr.Baddeley. I can identify two more people in the Christmas at Fasnakyle house photo. I loved the photo and was very touched to see the innocent faces that I shared a portion of my young life with. The little girl center right with the mask is Frances I think her mother is behind her to the right. I also knew Kenny Mclennan, the young boy to the left.We were all playmates at the time, living on the Fasnakyle estate. My parents were German immigrants who emigrated to Scotland in 1950 to work on the estate.
I was allowed to join them in 1952 and experienced one of those wonderful Christmas' at the Fasnakyle house, one year later than the photo. My father was the Chauffeur for Captain Clarke. The two men met during the British occupation in Northern Germany where my father acted as an interpreter for the British officers. The two men must have hit it off. A small reason may have been that they had something in common. My name was also Margot. My mother was the cook at the house. Frances and I went to school together in Cannich, she was a close friend and I have a school picture of her. What wonderful years they were. I think about them often...My life in the Fasnakyle House was a major event in my life and I am planning to take a trip there next year. I have not been back since 1955. Best wishes, Margot Luedke (Ludke) 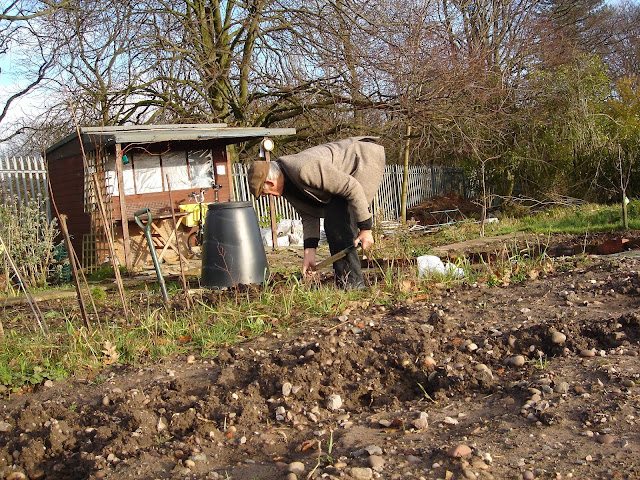 As Linda and Dot worked in the kitchen getting ready for lunch, I cycled with Oscar to our allotment and raised a couple of pounds of Jerusalem Artichokes from the clogging earth, washed them clean under the tap by the plot, and took them home to bake with the rest of our Christmas meal. Three generations of us gathered, and with crackers and a bombardment of poppers, sat down.

I took my turn in washing up before, in falling dusk, my son-in-law and daughter and I and Oscar strolled about Handsworth Park, having the place almost to ourselves - an oasis of quiet amid the muted hum of traffic; the calling of duck and geese, black dots on the still water; window lights glimpsed through the branches of leafless trees. Oliver fought sleep so we did a second round of the pond getting home in darkness, to sit down again for Christmas pudding, flamed with blue-burning brandy, laced with cream. Oliver wakes. We rise and go next door where there's a coal fire and sparkling tree. We share presents. For me a jar of Marmite that'll last half a year, Patum Peperium pots, thermal underwear, chocolate and several police procedurals from other countries. 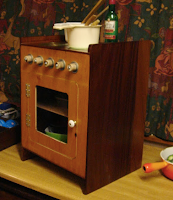 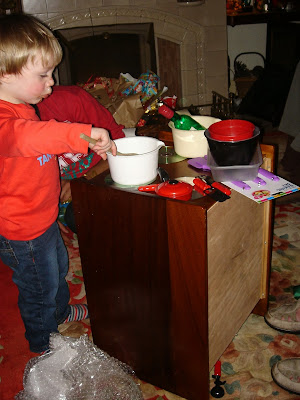 Oliver seemed to like his Christmas present - the toy cooker we've made out of a wooden locker left in the street and collected by Handsworth Helping Hands a few weeks ago. Washers, handle, nuts and bolts, hinges and screws came from a small ironmongers up the Lozells Road; cookware from Poundland; cooker rings, used DVDs; controls sawn from a discarded broom handle.  Into the evening the boy struggled to stay awake; the first Christmas he will remember? At last he, and then his father, fell asleep. 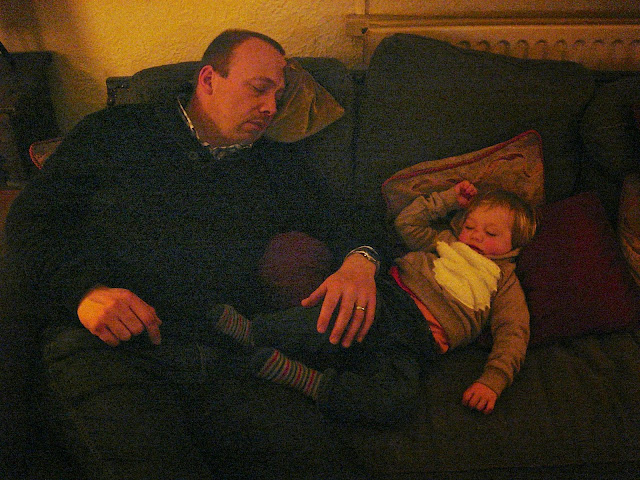